After spending the whole winter at home in the snow, and Mom spending it in and out of the hospital, as March rolled around, Mom and I were both eager to get away for a couple weeks.  We decided to aim our targets for Naples (Vanderbilt Beach) as my stepsister and her mom would also be vacationing there around the same time.

So, I got the View pulled out of it’s winter storage, Millie put on a festive green bandana, mom brought some lovely spring daffodils, and off we went! 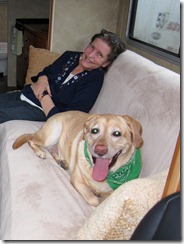 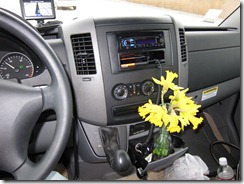 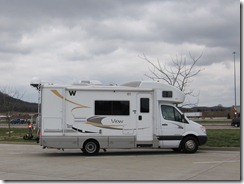 We spent the first night at the RV dealership where I’d bought the View in Indianapolis as it was right on the Interstate and had free electric hookups in their parking lot.

After emerging from winter storage, everything seemed to still work fine on the View except the hot water.  So, as soon as the dealership opened, I went in to see about getting it looked at. Amazingly, for such a large dealership, they had no service technicians working on Saturday.  But fortunately, they directed me to another Winnebago dealer about 20 miles down the interstate, and that dealer was much more helpful.  Fearing some complex repair job ruining our vacation, it turned out to be simple “newbie error”!  When I initially had prepped for the trip, I had turned the Hot Water bypass valve a few times to get the “pink stuff” antifreeze out of the water lines.  Well, I thought I had reset it correctly, but I didn’t.  The RV Tech simply flipped the valve, and bingo…hot water started flowing.  Duh, I felt like an idiot!  Edinburgh RV was great though—they refused to take any payment for their time, so I made sure to go buy a few small accessories from their store to thank them.

After that delay, we were back on the road again, but it wasn’t long before another issue cropped up—this time, my iPhone charger stopped working.  No worries though—a stop at a Best Buy right off the interstate in Nashville, and I was back in business.

The rest of the trip was uneventful—we stayed at 2 nice Flying J truckstops in northern Georgia and near Tampa on the way down, and we stopped at favorite familiar interstate restaurants—Perkins and Cracker Barrel.

In Naples, many of the RV parks were filled or else on the way other side of town.  Fortunately, I was able to get a site at Lake San Marino RV Resort which was the closest to the condo where my stepsister was staying at.  This was a “55+ active adult” resort, and they weren’t kidding!  There were more planned activities per day for those seniors than I had ever seen!  When I went to pay our rent in the morning, I noticed about 50 bikes parked at the clubhouse at 9am.  There was a shuffleboard match going on, and the 50 folks were sitting in bleachers watching it!  They literally had about 8 different events planned each day from craft classes, bike tours, and swimming to bingo and ice cream socials. 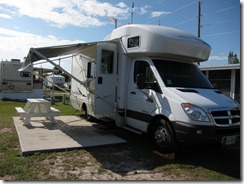 Our site was right next to their laundry/exercise/game room, which was fine during the day, but that night, a group of seniors came in to play poker and were woopin’ it up quite loud.  Initially, we feared they’d be in there until the wee hours and interrupt our sleep, but then I remembered “wait, we’re in a SENIORS park!”  Sure enough—at 9:00pm sharp each night, the group disbanded and went back to their RVs!

The highlight of the trip for Millie was two visits to the Dog Beach in Bonita (the only dog beach on the entire west coast of Florida).  My stepsister Carol and I took her and she had a great time in the warm gulf waters. 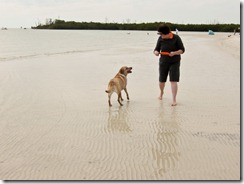 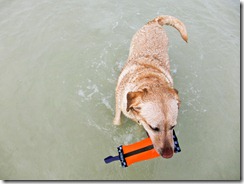 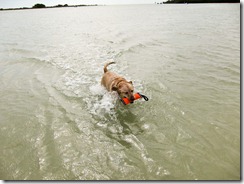 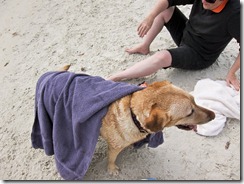 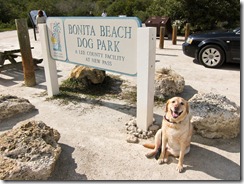 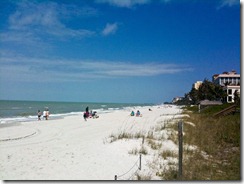 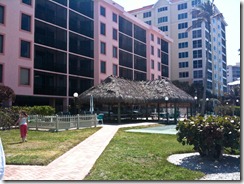 One of my goals for this Florida trip was to go kayaking on one of the spring-fed rivers with hopes of seeing a manatee.  A river just north of Tampa looked promising, so we made a stop there on our way home.

Weeki Wachee Springs is a old tourist attraction that is now a Florida State Park.  While you can still see “mermaids” and other such stuff at the amusement park, they also have kayak rentals for the beautiful river itself.  Mom and Millie dropped me off and then drove the View down to the take-out point.   What an amazingly beautiful river the Weeki Wachee is! 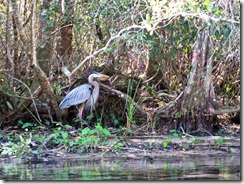 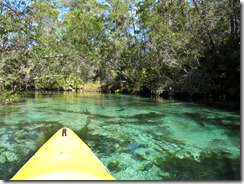 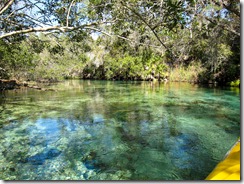 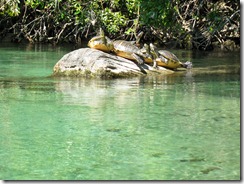 and near the end of the trip, I finally got to watch a manatee swim around our kayaks for about a half hour…wow! 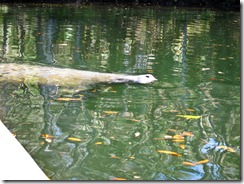 After the boat trip, we drove up to Gainesville to spend the night with cousins that live there.  It was a nice, but short, visit.  Finally, we were back on the road again to cold, blustery, rainy Chicago.  I’ve really got to snowbird next year!