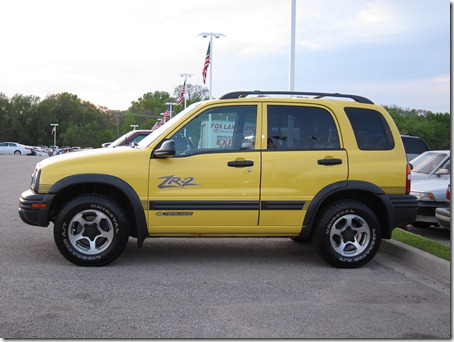 For the first year and a half with my View, I never thought I would need to tow a car (a “Towed” or “Toad” as they’re called in RV’ing circles). I even blogged about the Toad Alternatives I had come up with when I began snowbirding this past winter.

Being parked for a month where I was in Florida, was very conducive to renting a car when I needed one, or riding my e-bike when I did not. But, had I stayed at a park further away from conveniences, or had the weather not been as nice, it would have been a different story.

Later in the winter, when I was out in the Southwest, I again initially thought that not having a toad was fine. I was moving around quite often, and again was able to rent a car, or ride my bike if I didn’t want to drive the RV.

But then I visited Anza Borrego State Park in California and saw how much fun folks were having taking their 4WD vehicles deeper into the park where only 4WD and off-road vehicles could go – “Gee, I wish I had one of those” started popping up in my mind.

Next, was mistakenly driving the Apache Trail in my View. Yes, it was mildly terrifying, but it was also incredible fun! I realized it would have been even more fun in a proper 4WD vehicle rather than a 25’ motorhome!

Finally, as I began researching my summer destination (the San Juan mountains of southwestern Colorado), I was reminded again of the renowned 4WD trails in the area, and just knew I had to give some of them a try this summer. Sure, I could rent a Jeep out there, but the more I started thinking about it, the more I realized a vehicle of my own could come in handy in many other ways besides this particular trip or when stowbirding —extra cargo carrying for the View, a second motorized vehicle if the View breaks down on the road, a pick-up car when river paddling, etc.

So I began my search for a lightweight, automatic 4WD toad. Not too many options there! Jeeps were too heavy, CRVs and RAV4s were mainly AWD and not true 4WD with low gearing, and others were only towable with manual transmission rather than automatic. But there was one model that fit all the criteria—a 1999-2004 Chevy Tracker/Suzuki Vitara.

After a few weeks of test driving and looking at a number of used cars, I found this cheery yellow one with leather interior that looked to be in extremely good condition compared to all the rest. The dealer had priced it accordingly, so I waited a couple more weeks and kept looking. Then, one day, the dealer lowered the price $1000, and now made this little yellow beauty competitive with all the others. I ran out on a Friday evening and snatched it up! 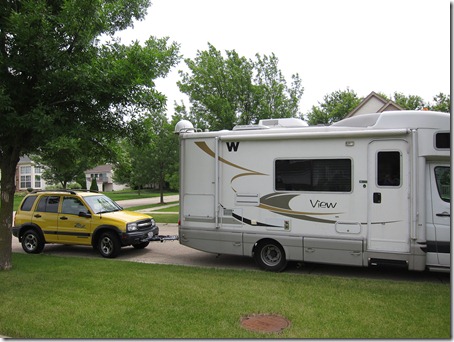 So, now I just had to get it set up for towing! Another few weeks of researching the dizzying number of towing options, and dealers, and I finally decided on a BlueOx baseplate and a ReadyBrute tow bar with an integrated surge braking system called ReadyBrake.

My RV dealer installed the whole system and gave me a thorough demo on how to hitch and unhitch. So far, on the flatlands of Illinois, the View seems to tow this 3000 lb car with no problems at all. The bigger test will come next month when we head off to those big mountains in Colorado. Fingers crossed!!!