While I wished I could stay longer to explore more of Bryce Canyon National Park, the weather forecast was to plunge into high winds and a deep freeze, and my propane tank was nearly empty after running the furnace running nearly non-stop for 3 below-freezing nights.

So, I decided to wake up early for a sunrise photo shoot on my final morning.  Now savvy enough to know that one should avoid Sunrise Point and Sunrise (and Sunset Point at Sunset) if trying to avoid the mob of other park tourists, I decided to drive down to the next overlook, Inspiration Point.

I got my tripod set up with only a few minutes to spare before sunrise, the clouds were showing some nice color, and I, incredibly, was the only person there! 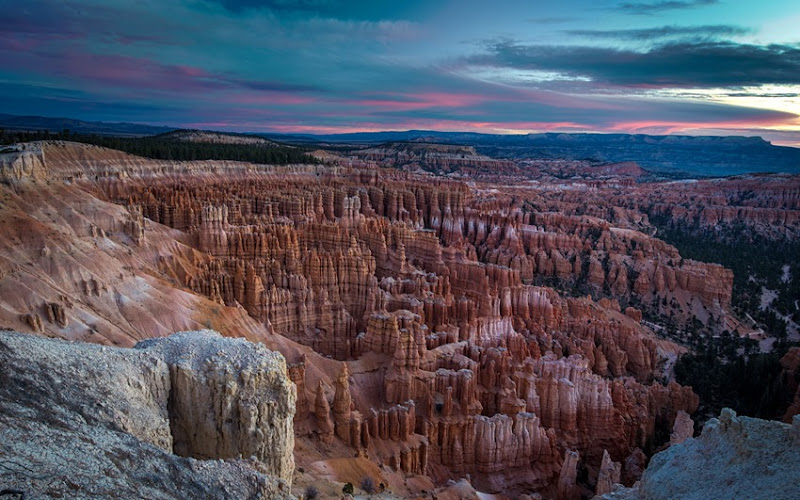 Read more »
Posted by Unknown at 11:15:00 AM 23 comments:
Email ThisBlogThis!Share to TwitterShare to FacebookShare to Pinterest
Labels: National Parks, Utah

Hiking Down Into Bryce Canyon

After seeing Bryce Canyon National Park from the rim at sunset, I was determined to get down into the canyon for a hike the following afternoon.  I reviewed the park handouts and maps and decided to do the moderate-rated Navajo Loop and combine it with an “out and back” jaunt over to the Queen’s Garden while I was down in the canyon.  The total distance would be just over 3 miles with an elevation gain/loss of 550 feet.  A bit of a workout, but very do-able!

Remember this shot from my last post?  A commenter said she was starting to realize the impact that good lighting has on a photograph (such as late afternoon/early morning light versus the mid-day sun).  Well, here’s a perfect example!  This first shot was taken at around 4:30pm, an hour before sunset, as the sun was reflecting incredible “glowing” light off the hoodoos.  Complete magic! 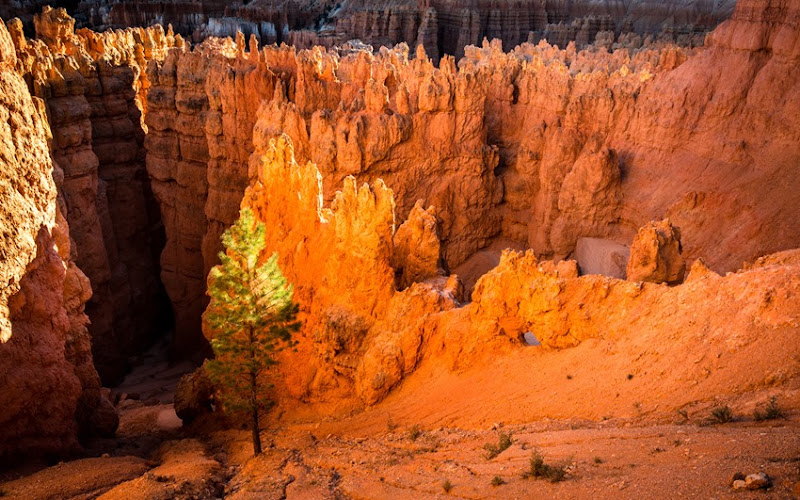 Now, here’s the same scene the next day as I started my hike (around 1:00pm in the mid-day sun).  Certainly still a great scene with some nice glowing hoodoos, but surely not the magic as the first shot.   Yes, indeed, lighting is a crucial element for a great photo! 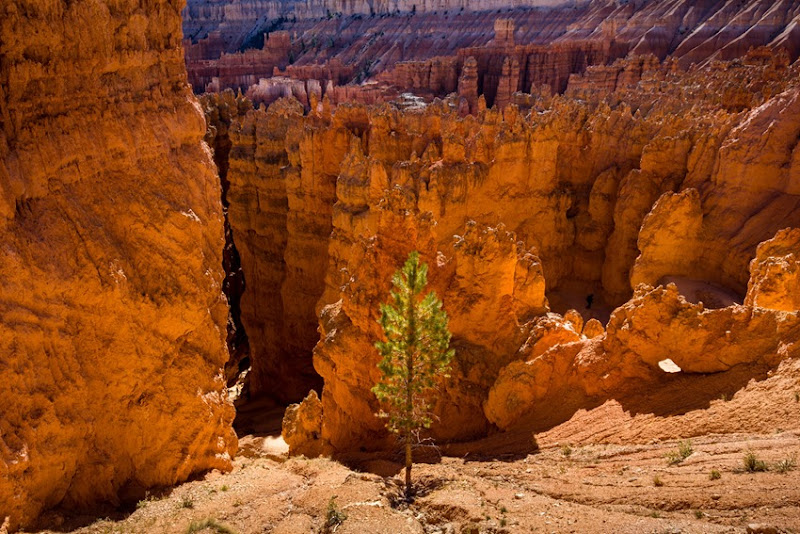 Now, let’s get on with the hike!

While it was lovely to see the two National Parks in Moab again (Arches and Canyonlands), the true excitement about planning this year’s visit to Utah would be finally getting to see 2 new National Parks that had long been on my bucket list—Bryce Canyon and Zion.

I originally thought I’d fit in visits to Capital Reef, Escalante, and drive the entire scenic Highway 12 byway all within the one week I had to get from Moab to Zion.  But, I quickly realized I’d made the classic “new full-timer” mistake of trying to cram simply way too much into too short a timeline.   So, most of those plans got tossed onto the “next time” list, and I focused solely on Bryce for the next few days (with a stop beforehand to “Camp Wally” in Richfield to take care of boring life stuff like grocery shopping and a hair cut!).

The last week of October at Bryce Canyon had a few sunny days forecasted in the low 60’s (with night temps dipping down below freezing).  But it was “now-or-never” as the following week’s temps would go even colder with some first snows predicted.  So, I topped off the propane tank, bundled up, and headed up to 8,000-feet!

As I turned onto Scenic Highway 12 towards Bryce, the sun was beginning to set onto Red Canyon.  The views were getting better and better! 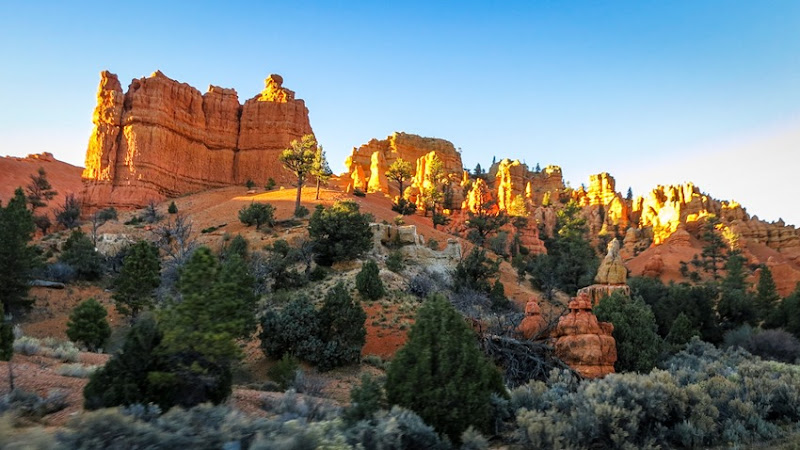 Moab graced us with a final glorious sunrise as Suzanne and I prepared to pack up our Winnies and head off to separate canyons. 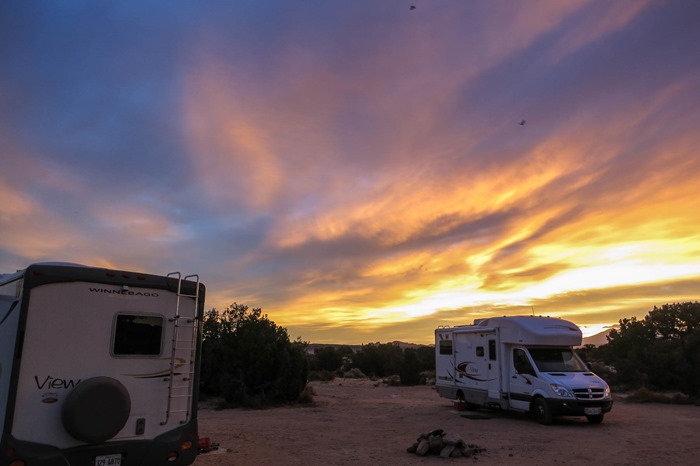 Suzanne was headed back to her special place, Snow Canyon, near St. George.  While I had my compass pointed towards Bryce Canyon National Park before cold would make it unbearable.  But on the way, I was determined to visit a little canyon that Box Canyon Mark had once described as “a trip to Disneyland” (with the exception of their most recent ill-timed visit).  I had never hiked a slot canyon before, and was “chomping at the bit” to give Little Wild Horse a ride! 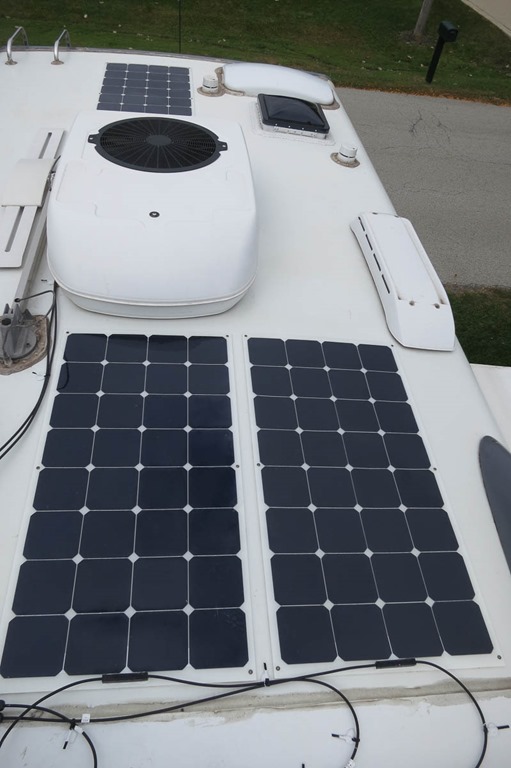 Looking at Canyonlands National Park’s Island of the Sky District from the mesa-top is a breathtaking and frustrating experience all at the same time.  Breathtaking for the vast Colorado and Green river canyons that envelop the mesa from both sides—each a “canyon within a canyon”, and each appearing even larger than the Grand Canyon. 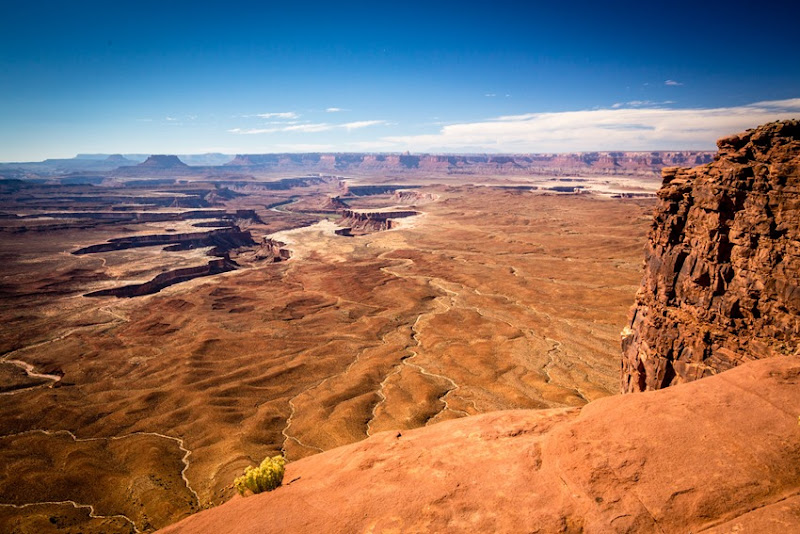 But frustrating too—one never seems close enough to get a really good look at these canyons when looking at them from the mesa-top.  I remember that same feeling during my previous visit in 1998, and also remember watching with envy as Jeeps as small as Matchbox cars went crawling down a curvy, steep dirt road to get into the canyon. 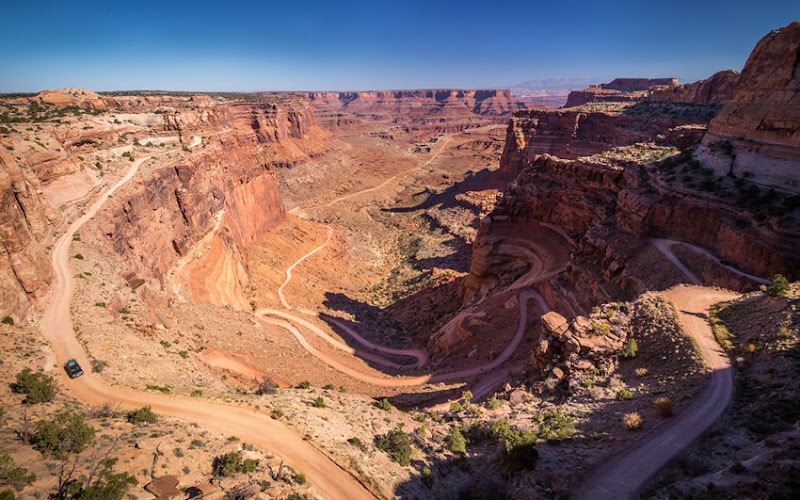 It may have taken me 16 years, but on this visit, I finally got to drive this road and experience Canyonlands below the mesa-top.

Off-Roading to Canyonlands, Part I

Moab is home to some of the most radical and difficult 4-wheel-drive Jeep trails in the U.S.  With trail names such as Cliff Hanger, Hell’s Revenge, and Metal Masher, it’s no wonder the trails provoke a rush of testosterone from every young male with a comically-oversized Jeep who reads about them, and more rational “forgeddaboutit” decision-making from everyone else.

It had been over a year since my little yellow Tracker had done some off-roading, so I was eager to find a few easier (sane) trails to explore.  There looked to be a few around Canyonlands National Park, and since this was Suzanne’s next park to check off her bucket list, we decided to take a few trips to the park via dirt backroads rather than the paved highway. 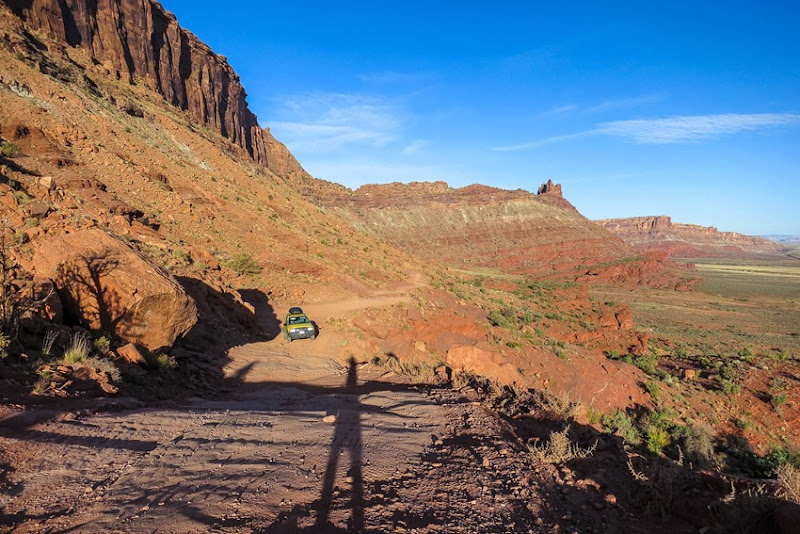 Suzanne and I are giddy with excitement as we stand alone in a small parking lot at Arches National Park.  We hold in our hands a golden ticket, perhaps as rare and coveted as the famous golden tickets to Willy Wonka’s Chocolate Factory!

For a hiker-addict like Suzanne, getting a pair of last-minute tickets to the ranger-led Fiery Furnace Hike (that sells out months in advance), indeed feels like a getting a guided tour of the candy factory.  We just happened to be at the Visitor’s Center the day before when a school group had turned back 5 of their excess tickets (that we and 3 other unsuspecting senior tourists were able quickly snatch up).  I had wanted to treat Suzanne to this hike for her birthday after she had treated me to such a wonderful Star Party at the McDonald Observatory in West Texas back in March for my birthday, but had been unsuccessful in getting tickets until we happened to be “in the right place at the right time” at the VC for fate to intervene.

We arrive to an empty parking lot 15 minutes before the tour is to begin.  Are we at the right place?  A trailhead sign confirms that we are: 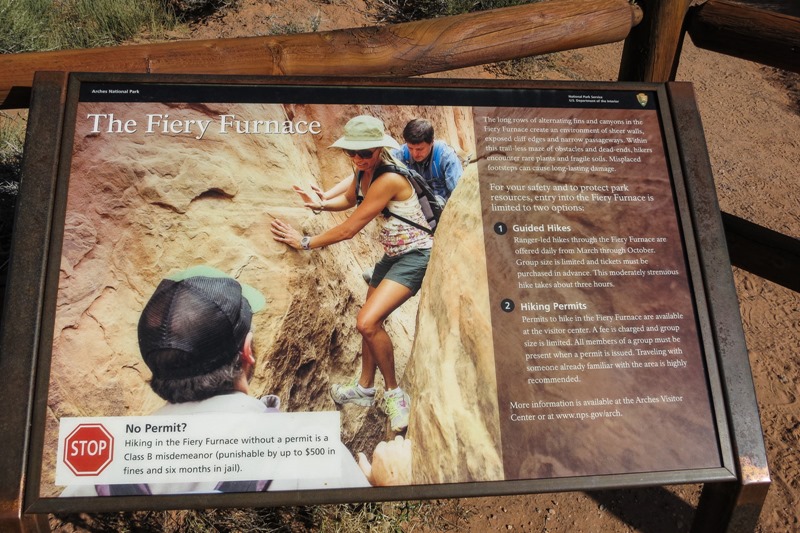 Soon, an “active elderly” couple arrive, jumping out of their car gleefully holding their prized golden ticket.  Then, another solo senior drives up with hers.

The anticipation is now buzzing as a final group of cars and vans roll into the parking lot and a dozen 8th-graders begin bursting out of their vehicles with their 3 young teachers not far behind.  Somehow, when Suzanne and I heard “school group cancellation” at the VC yesterday, we thought the entire school group had cancelled.  Little did we know that we were now about to become honorary 8th grade students of Mr. Wiley’s for a day!

After our weekend in paradise, Millie and I had some social engagements to get to back in Moab.  Our friend Suzanne was coming to see the two national parks here, and after being in the Moab area for two whole weeks and not yet having set foot in either park, it was high time for me to pay each a few visits as well.

The nice BLM boondocking area north of town, Willow Springs Road, made a perfect base camp for the week as it sits right between both Arches and Canyonlands, has gorgeous views, great 4G cell service, and you sure can’t beat the price…free!

I found us a nice, large campsite big enough for 2 Views and 2 Trackers and set up to await Suzanne’s arrival. 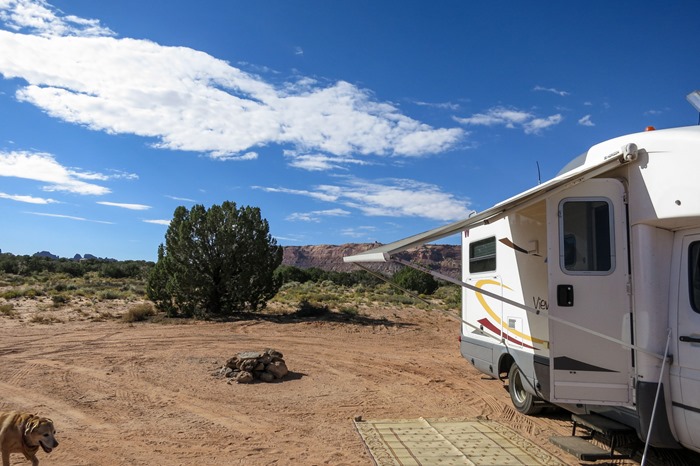 Our first sunset was quite a show.. 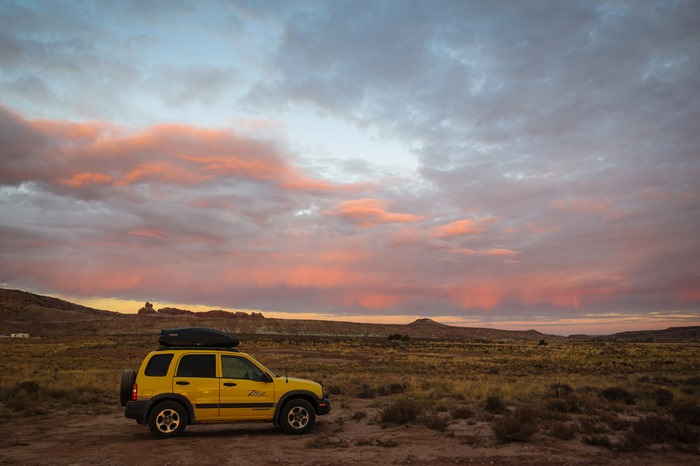 but our neighbors up the lane had an even better view of Arches NP and the La Sal mountains from their “patio” on a large mound of slickrock! 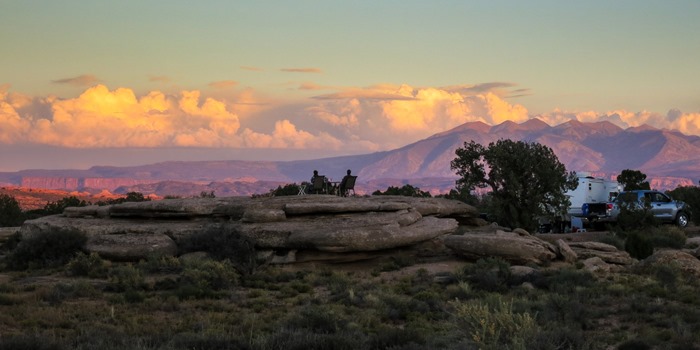 Have I mentioned yet how much I am loving this free boondocking thing?!!!