New Addition to my Mobile Productivity Arsenal – the Apple iPad 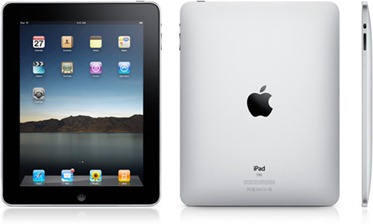 I told myself I’d show constraint and not pre-order an iPad before the official launch date—they might be buggy, there might be hardware or battery issues, the price might come down.  I kept repeating that to myself.

One April afternoon, a week after the official release, I thought I’d take a drive to the local Apple store to see and touch one in-person.  First impression – “Wow, this is cool”!   When I heard the salesman tell me he thought they might still have one single 16GB model left in stock, my self-restraint fell by the wayside as I quickly pulled out my credit card!

I left it “naked” for the first few weeks trying to figure out what kind of case and accessories I really wanted.  I finally decided on an hp Netbook neoprene case (it’s small enough to slide in along side my laptop in my laptop bag, and flexible enough to fold in half and use as a prop-up pad to rest the iPad on my lap at a good reading angle.  It also fits the iPad absolutely perfectly!). 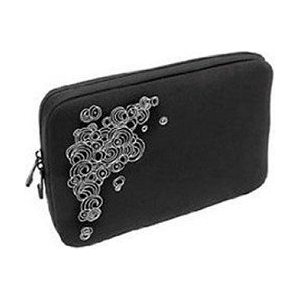 I also decided on this minimal, but very effective, silicone cover that provides more “grip” when holding it (the aluminum back is just too slippery itself)—the iFrogz Soft Gloss Clear Case 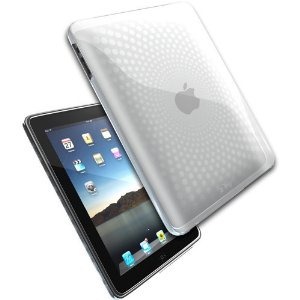 My absolute favorite accessory so far, though, is the Camera Connection Kit – a set of 2 small 30-pin connectors, one that has a USB slot, and the other that has an SD Card slot. 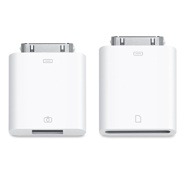 This is absolutely the best $29 I’ve ever spent!  As a photographer, I always lugged my laptop around and downloaded CF and SD cards at night to see the photos I had taken that day and keep a backup copy of the files.  Now that I have a heavy 16” laptop, it was becoming quite a pain.  But no more!  Now, I can plug my CF card reader (or SLR itself) into the USB connector and the iPad will import my Canon RAW files directly.  It also imports both JPG and Video files off my Point-and-Shoot camera’s SD card and gives me a great, immediate way to view images and videos.   As a bonus, the USB connector also accepts any USB computer keyboard or headset—great for typing long email messages, novels, long Skype conference calls, etc!

Only downside, is now I wish I would have bought the larger capacity iPad!  I originally thought 16GB would be plenty as I keep my music on my iPhone and most everything else online in the cloud.  But now that I see this can be used as a photo/video backup storage/viewing device, I wish I had more than the current 5 GBs of remaining space I have available…oh well, it’ll be a reason to upgrade next year when the video camera-version comes out :-)

Posted by Unknown at 4:18:00 PM No comments:
Email ThisBlogThis!Share to TwitterShare to FacebookShare to Pinterest
Labels: Mobile Tech 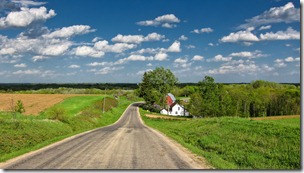 After being home for a month, with no business travel on the immediate horizon, I was getting antsy to get out and go somewhere anyway.  So, when weather looked promising up in Wisconsin, I loaded up the View for a week to work from the road.

I wanted to explore Vernon County in west-central Wisconsin, as I thought I might try to paddle the Kickapoo River on my day off.   So, I began checking online for potential RV parks with cell phone/data coverage to ensure that I could work from the area as well.

Of course AT&T’s coverage map looked like crap :-)
But, in this occasion, Verizon’s didn’t look a whole lot better.  It did look like coverage for both was pretty strong around the town of Viroqua, and there was a county park just outside of town that appeared to have coverage as well, so that was my target destination.

I arrived in Viroqua around 9:00pm on Sunday night and after confirming good cell reception along main street, I headed to the county park to be sure I’d have it there as well from my Monday work day.  After bumbling around dark country roads looking for the park, I finally found it, only to discover….the darn cell coverage maps lied!!!  No AT&T, No Verizon, nappa, zip, zilch!  Fortunately, there was a Wal-Mart back in town, so I ended up there for the night and it was actually quite peaceful.

The next morning, as I began to haul out my laptop and cell phone, the nice healthy 4 bars of AT&T coverage on the iPhone that were there last night from this spot, were now non-existent (curse that damn AT&T, curse them!!!).  Thankfully, I use Verizon for my cellular data service for this very reason.  I fired up my MiFi card (that provides Wifi to both my laptop and iPhone) and launched my Skype iPhone app to do my morning conference calls.  Once Monday work was done, it was now off to find an RV park with cell coverage.

Turns out, Vernon county has lots of steep, taller hills than most of the rest of Wisconsin, and it also has a large Amish population.  So that explains why cell coverage in this part of the state is not very abundant!  So, I decided to drive over to Goose Island County Park just south of La Crosse on the Mississippi river.  I knew I’d have good coverage there, and I did.

Goose Island had some great sunset views of the river: 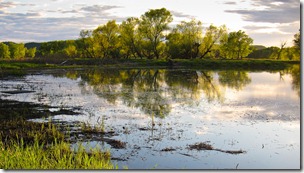 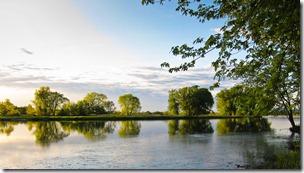 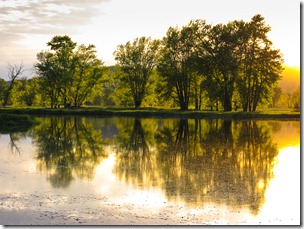 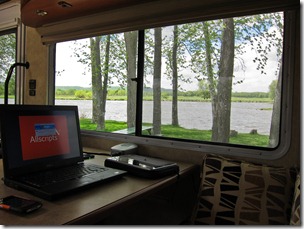 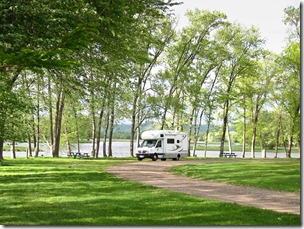 On my day off, I drove back over to Vernon County to explore.  A storm was moving in, so I didn’t have time to canoe the Kickapoo, but it’s now certainly on my list to get back to (the Kickapoo valley was incredibly beautiful and should be spectacular this fall).  The area is mostly Amish, and respecting their “no photograph” desires, I refrained from taking pictures, but won’t soon forget the images of Amish school kids out playing on a hillside next to their one-room schoolhouse, or the group of 10 black horse buggies parked at one farm where a group of families had assembled for a volleyball game in the front yard (in Amish dresses and suit coats no less!), or the many Amish farmers out plowing their fields with horse-drawn plows.  No iPhones or high-tech needed in this little area of the world! 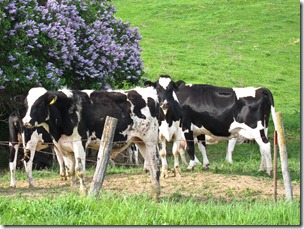 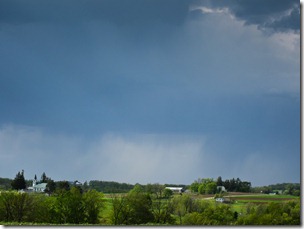 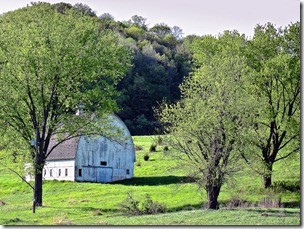 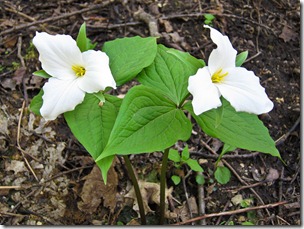