Car/RV add-ons for your Tablet or Smartphone

So, congratulations!  You’re a proud new smartphone or tablet owner!  You’re amazed at all the things these “do everything” devices can do, and you now want to take it on the road with you.

First, a disclaimer & reminder—good drivers never text and drive, and don’t fumble around with their “pocket computers” while speeding down the highway!  Please just fumble around while your vehicle is stopped!  Ok, on with the show…

I fell in love with my little yellow Chevy Tracker from the day I bought it a few years ago, but I sorely missed the more recent car audio features on it’s old 2003 Delco radio—no external audio input jack, no USB connector, and no Bluetooth.  For a while, I considered getting a new aftermarket car stereo, but it just seemed “overkill” for my cheap-o toad.  But, last year, I found a perfect solution for less than $50 bucks-- the GOGroove Smart Mini 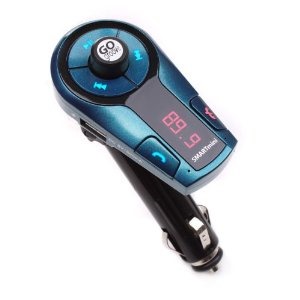 This little puppy has performed flawlessly and is small enough to carry to any vehicle you happen to be in (great for the RV or even rental cars too!).  Plug it into a 12 volt socket, press the GO button to scan to an available FM radio frequency, set the vehicle’s radio to that same frequency, and enable your phone/tablet’s Bluetooth to pair to the GOGroove.   If you wish to charge your phone/tablet, there’s a USB port on the GOGroove to easily do that.  It also has two 3.5mm audio jacks if you prefer to connect your phone to the GO via headphone output (rather than Bluetooth), or if your car has an external audio input, you can connect the GO directly rather than using the FM transmitter.

This year, I wanted to modernize my GPS solution.  I had been using a trusty old 4.3” Garmin GPS on a beanbag mount with it’s own 12 volt plug.  It wasn’t a bad setup, but the maps were getting a bit outdated, I wanted to be able to hear navigation directions thru my car stereo speakers, and I REALLY wanted to reduce all the devices competing for the prized 12 volt outlet on the dash!

With this year’s upgrades to iOS and Android, Apple and Google have finally delivered navigation solutions that seem “close enough” to Garmin to give it a try.

But this “GPS consolidation” decision brought a new problem—how to mount my phone or tablet to actually view it “hands free” while driving.  I wanted a mount that I could easily move between the Tracker and the View, wanted it to be able to hold either my iPhone or Nexus tablet, and didn’t want anything permanently mounted to the dashboard or my smart devices.  Back to Amazon for another search, and within a few minutes, I found this terrific Mountek nGroove Snap for under $30! 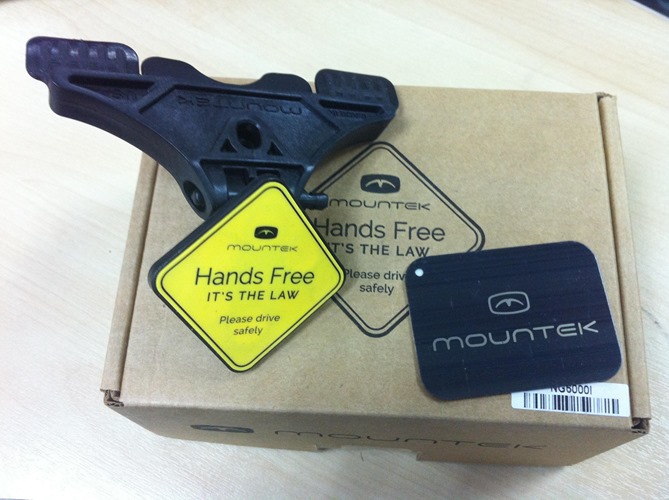 The Mountek has a strong magnet behind the yellow mount.  They supply 3 thin metal discs that you can either “peel and stick” to the back of your phone or tablet, or simply slip a disc between the phone/tablet and it’s lightweight case to avoid adhesives altogether! 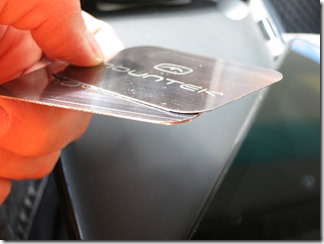 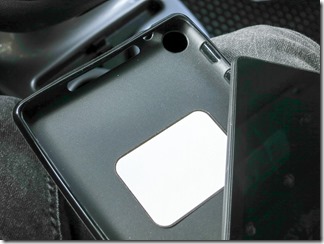 Once the metal disc is in place, your phone/tablet magnetically mounts to the Mountek.  Easy Peasy!  The Mountek is designed to wedge into a CD player slot, and on my Tracker, it fits there perfectly.  However, my View has a “removable faceplate” Sony car stereo that is a bit too thick and prevents the Mountek from fully reaching the CD slot.  Fortunately, there are some nice dashboard seams that work even better for the Mountek, keeping the phone/tablet from blocking the radio controls and letting it sit a bit lower on the dash so it’s not blocking any windshield views.

Here’s what my 7” Nexus Tablet looks like in the View, as well as my iPhone 4S for comparison. 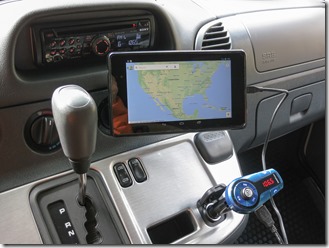 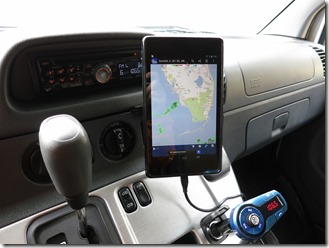 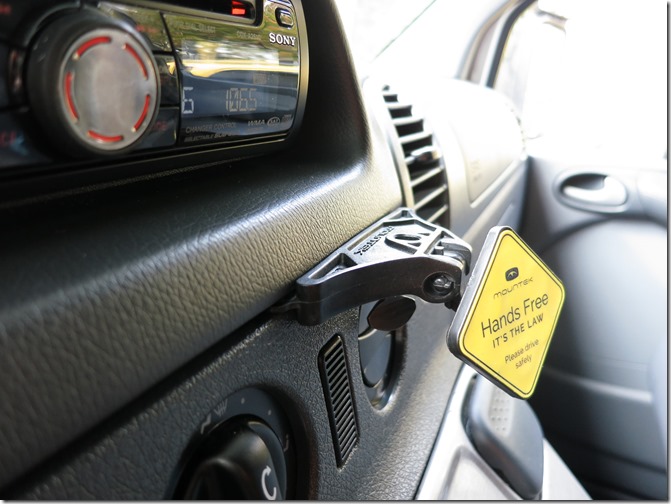 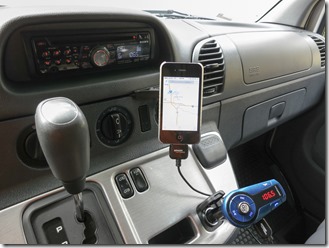 The Mountek even can serve as a tabletop stand—handy for catching up on web surfing when sitting down for lunch at a rest stop! 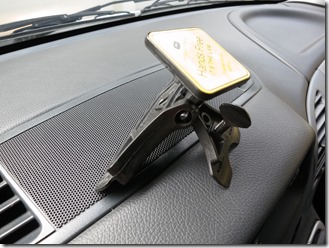 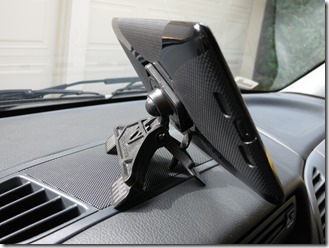 Since shooting these photos, I’ve decided to go one step further and upgrade the View’s stereo to this Sony model with built-in Bluetooth and USB

Now, I no longer need the GOGroove in the View and can just keep it in the Tracker all the time.  This also frees up the 12 volt outlet in the View to charge other items while traveling.

This stereo came with a traditional remote as well as an “app remote” so I can control the stereo from anywhere in the RV (and can also play music out the RV speakers in additional to the front cab).  Ready for a nice long road trip now! 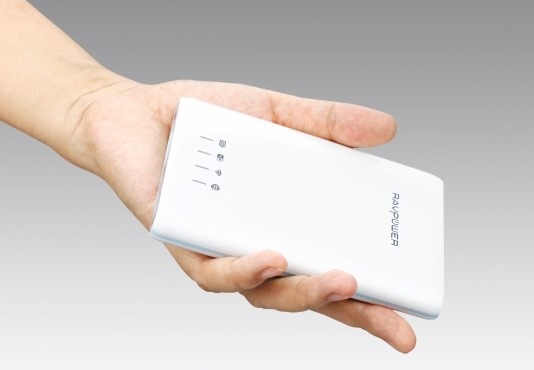 Both my iPhone and the Nexus only come with preinstalled storage—64GB on my phone and 32GB on my tablet.  So what if I want to access additional music, photos, or videos? Or transfer stuff between devices?   I could certainly upload and store them online (and do) and then download them via WiFi, but that eats up cellular bandwidth and also assumes that you always have an internet connection!

The RAVPower acts as an ad-hoc WiFi router—it “pretends” to be the internet to connect any WiFi-enabled device to whatever files you plug into the RAVPower’s SD or USB ports.  It’s also battery powered and can even share some of it’s extra juice to recharge your cellphone or tablet via USB!

Both of my new Canon DSLRs (the 6D and 70D) have built-in WiFi that can share camera files to a phone/tablet (or let you use the phone/tablet as a remote viewfinder), but if I’m trying to view images from my little point-and-shoot, or wanting to access non-image files such as music or videos, the RAVPower will do the trick.  And it’s barely bigger than an iPhone! 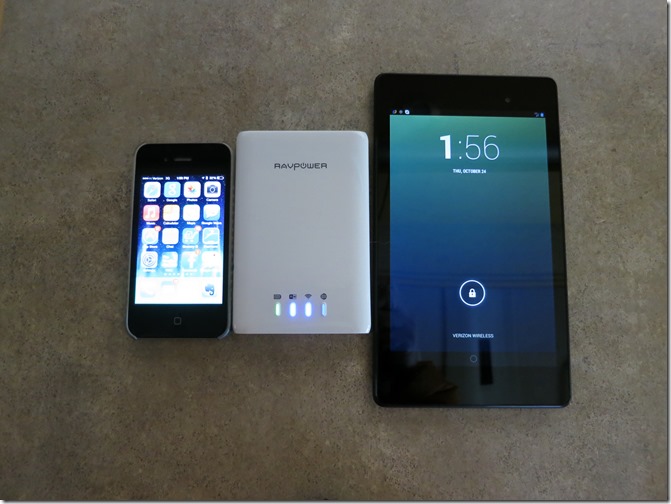 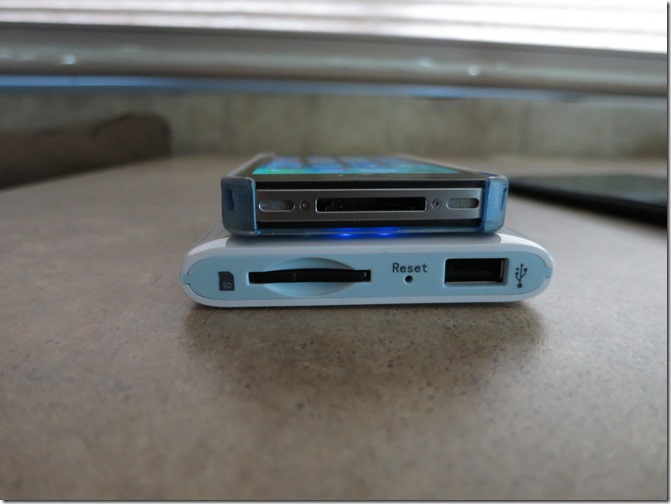 Posted by Unknown at 11:10:00 AM 7 comments:
Email ThisBlogThis!Share to TwitterShare to FacebookShare to Pinterest
Labels: Mobile Tech

As of Friday, November 8th, 2013, I was given a great send-off by this Dr. Seuss video (for those with limited bandwidth, here’s a link to the full text!):

Congratulations!
Today is your day.
You're off to Great Places!
You're off and away!
You have brains in your head.
You have feet in your shoes.
You can steer yourself
any direction you choose.... 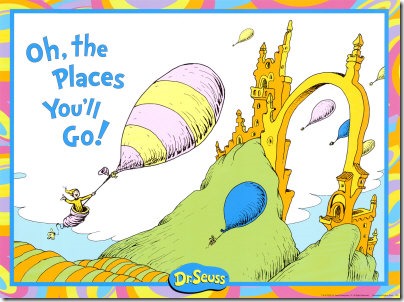 After 30 years of full-time work, I’ve now retired from the corporate world to pursue new adventures and full-time travel!

Retired from a corporate job....but not from any job!!!  In the future, I plan to volunteer and take on seasonal jobs here and there that look like a fun, new experience, a way to meet new people or be more active, and the opportunity to get a free campsite or some spending money in return.

I had been planning this day for years, and yet, at 5:00pm on Friday at the FedEx office, it still felt rather unnerving to watch the FedEx girl pack up my corporate laptop and ship it back to headquarters for the very last time…no going back now! 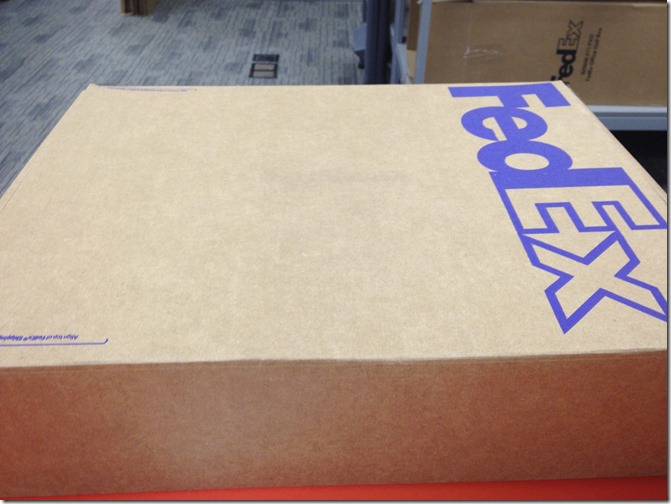 But, no worries, that momentary apprehension was soon eased by a few celebratory beers and some delicious Lou Malnati’s Chicago deep dish pizza with friends  (sorry, I forgot to snap any photos of that feast!).

As corporate jobs go, I guess I had a pretty good one these last 12 years as a project manager for a healthcare software company.  I was able to work from home (or from where ever there was an internet connection, so I could travel the US while still working), and I was well-compensated with a good benefits package.  It was certainly better than my previous jobs (that required me to commute daily to a cubicle in an office building)!

But remote “home office” jobs have their downsides too.  After the thrill of being able to work in my pajamas wore off, it could be quite a struggle some days to fight the social isolation that comes from a solitary work environment day in/day out.  I’d go grocery shopping and run errands in the middle of the day sometimes just to see and talk with other people face to face!

When I started this job, my company was only a few hundred employees.  Big enough to provide stable employment, yet still small enough to meet and know everyone when we gathered a few times a year for in-person meetings.  That brief personal connection was often invaluable, especially if needing to call a tech co-worker on a weekend at home to ask them to help resolve a customer crisis!

Our projects would last up to a year, and yet, because our company was still relatively small and I had personal connections to each team member, we all usually felt a strong sense of purpose and gratification at the end of the project when finally seeing the customer start to use (and enjoy!) our software.

But, in recent years, the company merged, acquired, and transformed into a giant 7,000 person multi-national corporation.  Now, my team members were spread out around the world and it was no longer feasible to have any in-person interactions. With the added new layers of corporate bureaucracy, it was also far more complex and tedious to get anything accomplished, let alone being able to deliver customer-delighting “great” work.

Watching my mom’s illness progress the past few years, while watching my company environment become less and less fulfilling, made me finally resolve to stop being one of those “waiting” people from Dr. Seuss’s above tale, and to get on with making my remaining days on earth more interesting and meaningful.

I’ll probably never “move mountains” in this next chapter of my life, but I sure hope to climb a few, and enjoy the views and friendships made all along the way!