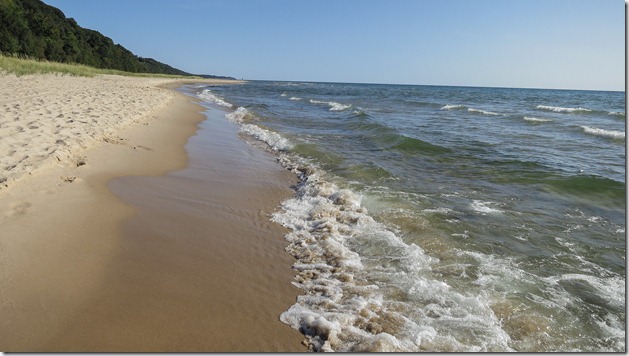 For the final week of our summer road trip, I wanted to enjoy the spectacular sandy beaches of western Michigan.  There are a few really nice State Park beaches in Michigan, but their campsites are usually cramped and they don’t allow dogs on the beach.  But a few weeks ago, I read a few glowing posts from WatsonsWander about a relatively unknown township campground they had stayed at that had a dog beach their chocolate lab absolutely adored.  Good enough recommendation for us!

Claybanks Township Park (about 30 miles north of Muskegon) indeed seemed like a little-known secret campground only frequented by the locals. A few of the last “weekend warrior” partier camping crowd were pulling out with their jet skis as I arrived on a Sunday afternoon (Jet Skis are allowed on this beach as well as dogs).  I doubt I would enjoy this park on a weekend! 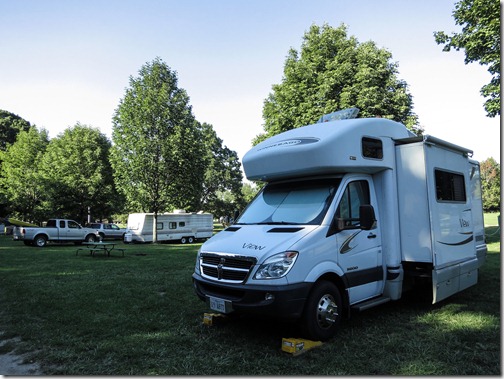 The hosts were very friendly, though, and let me drive around the park to select what site I wanted.  Most of these grass sites were rather un-level, so I’m very glad I was able to pick one myself!  Most seemed to be tent and trailer campers here.

Our site was near the stairs that led down to the beach.  Once set up, Millie was rarin’ to go for a swim! 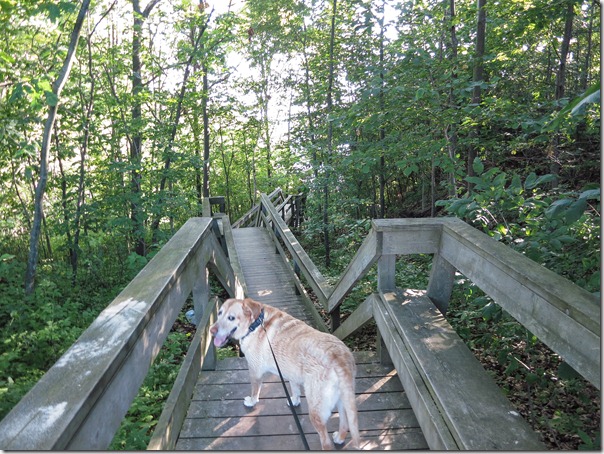 We quickly got into a routine each day after I finished work to zip down the stairs to the beach for Millie’s daily swim.  The large beach was virtually empty each day we visited—only a few people and usually only 1 other dog.

Even with only modest winds, the waves here were usually about 2 feet high.  In past years, Millie would have been too scared to swim out over those kinds of waves.  But not this year! 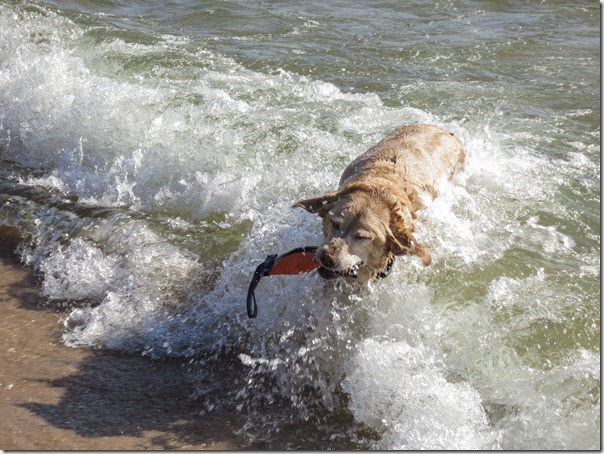 This little cancer-survivor dog is now fearless!  She would jump over the waves to get her toy and had a blast letting the waves roll her back into shore.  One very VERY happy dog! 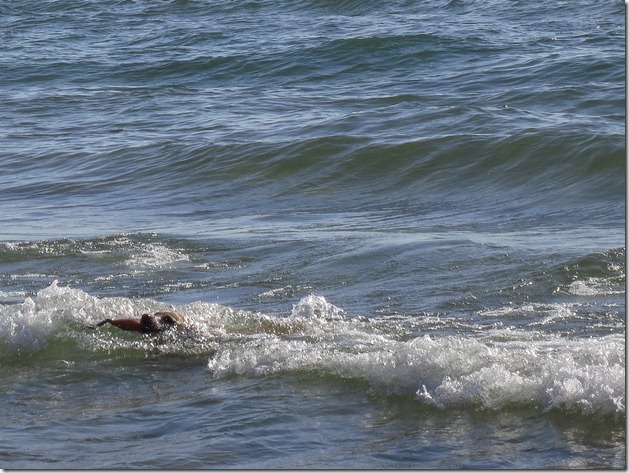 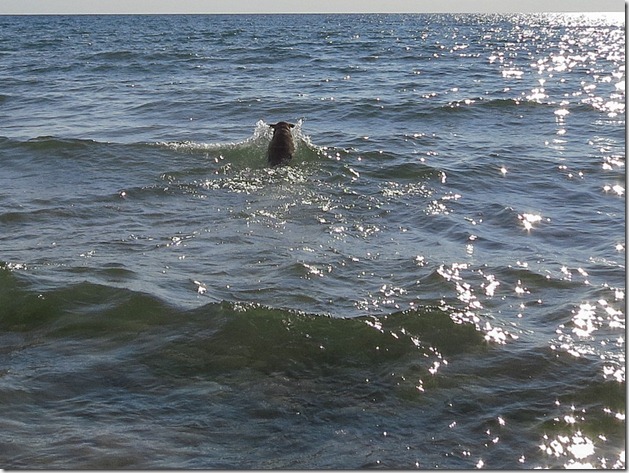 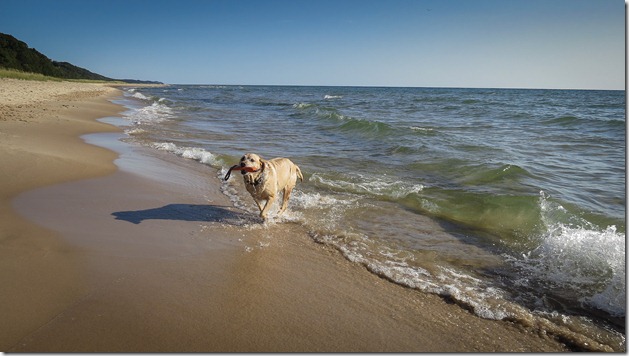 Missing a toe sure hasn’t slowed this dog down! 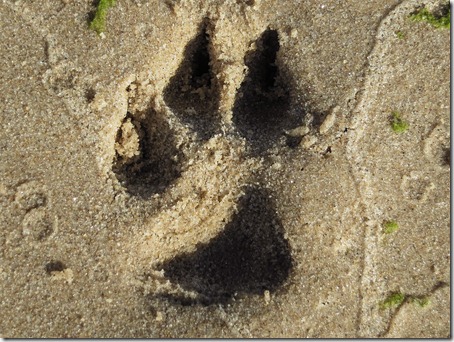 The other great benefits about enjoying Lake Michigan from the Michigan side were being on the edge of the Eastern time zone (meaning really late sunset times in the summer), and being able to watch those sunsets over the water.

Claybanks had a lovely large viewing deck overlooking the beach, but sadly, Millie could not come along: 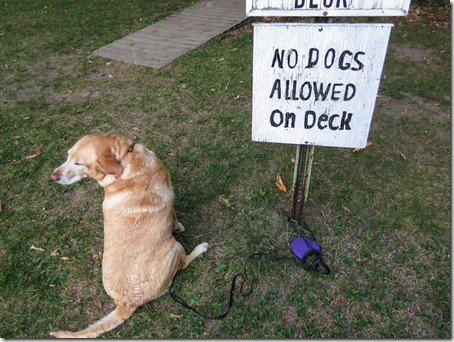 It seemed like all the women in the campground gathered at the deck each night to watch the sunset.  Not sure where all the men were, but we sure enjoyed the views! 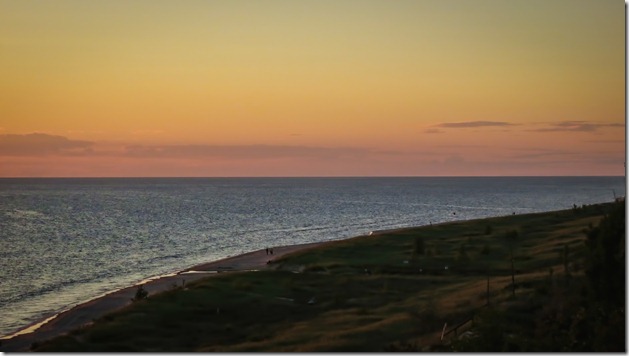 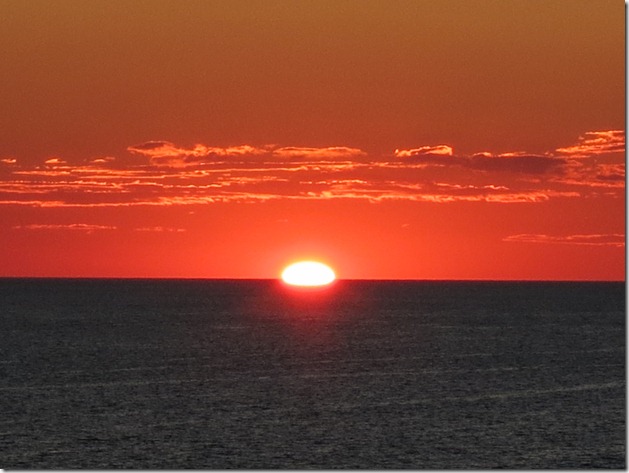 Claybanks turned out to be a delightful, laid back, quiet place to enjoy the final days of summer.  We will certainly return!