Used Car Saleswoman of the Month! 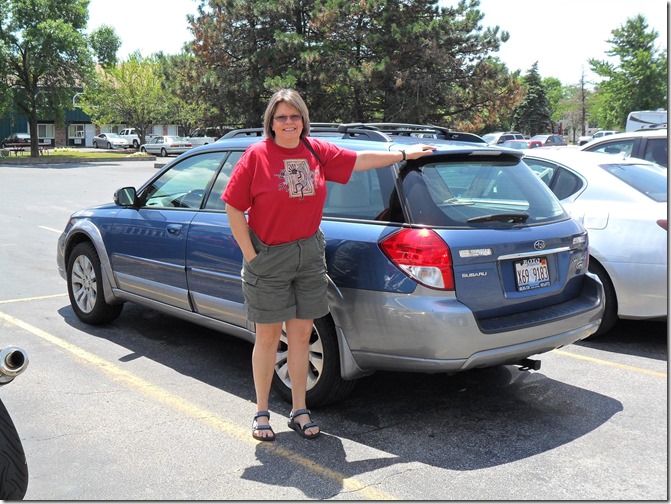 I sold 2 cars last Saturday!  If my daddy’s old used car dealership was still around, I’d have likely earned top honors as Salesperson of the Month!  But, no, I’ve not changed careers just yet.  These car sales were many weeks in the making.

When I bought the Lynnebago van in May, the driveway really became crowded and I decided to sell my Subaru Outback to my brother Randy (who’s current blue Subaru was getting up in miles).  Around the same time, we were also trying to figure out what to do with my Mom’s car, a Lexus SUV.  Randy’s good friend, Clark, in Colorado was needing a newer car, and since my mom always considered Clark her second son, it made perfect sense to sell it to him.

The biggest problem with all this was logistics.  They were both in Colorado, and the cars were here in Illinois.  We discussed various options, but ultimately decided to ship the Lexus and have me drive the Subaru out (since both guys were short on vacation time this summer).

I carefully reviewed potential freight companies on uShip.com (the last time I had used that service was 5 years ago when my 1st T@B Trailer had been totalled while being shipped back from Montana), and finally found one that had excellent reviews combined with low pricing.

They called the day before I was to leave and said that the driver would be there “a bit late” that evening.  That worked out fine for me as I was running errands and packing anyway.  The driver called a few times that evening, but didn’t end up arriving until 11:30pm.  Still, I was happy to see that he brought an enclosed trailer and would be hauling the car on it’s own rather than on one of those big, open, multi-car haulers (less chance of rocks and hail damage that way!). 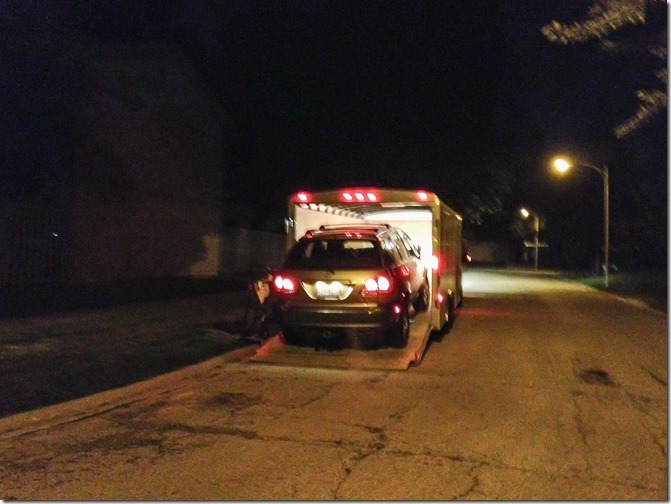 The “Midnight Trucker” took over an hour to meticulously strap down the car and secure the load, but finally at 1:30am, he was on his way.

The next day, I packed up the Subaru and started my long drive to Colorado.  Since I had worked the previous two days in downtown Chicago, I had already boarded Millie at her favorite Happy Paws Pet Resort, where she was, no doubt, frolicking with her other doggie pals and having a good old time at her “summer camp.”

My friend Judi from Bettendorf, Iowa was available for lunch, so she drove out to a restaurant along I-80 where we got to catch up for a couple hours.  I then set my sights on Grand Island, Nebraska, where I’d booked a nice hotel room with my Marriott points.  The drive was thankfully uneventful, and no violent Mid-Plains thunderstorms to be seen except for the final 5 minutes of my drive when arriving to the hotel!

After a nice, long, comfy sleep, I continued through Nebraska the next morning breaking up the boredom by singing along with Rogers and Hammerstein show tunes, and testing out the Subaru’s chops at doing a quick burst of speed up to 100 mph. 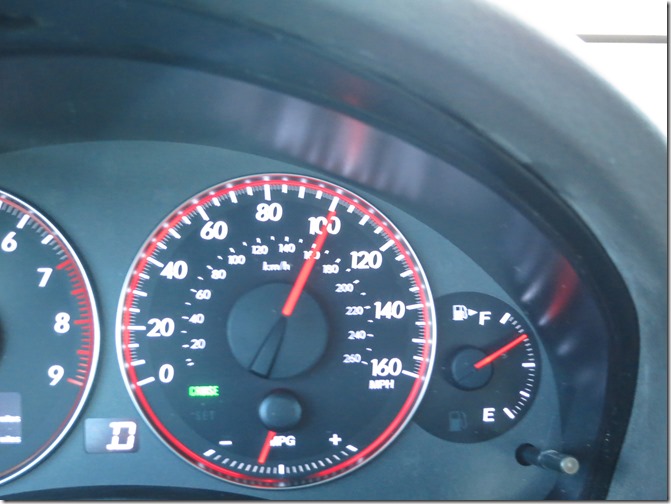 I managed to drive through Denver right at rush hour on Friday night, and feared I might be in for a few monster traffic jams, but incredibly, I managed to skate around most of them just fine as I turned onto I-70 to start the big climb into the mountains. 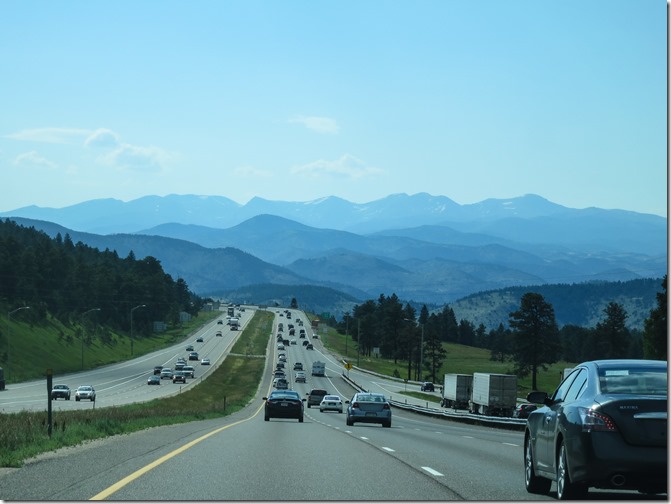 Unfortunately, soon after, I hit a 10-mile backup of stop-and-go traffic that added an extra hour to the trip.  A new tunnel is being constructed near Idaho Springs. 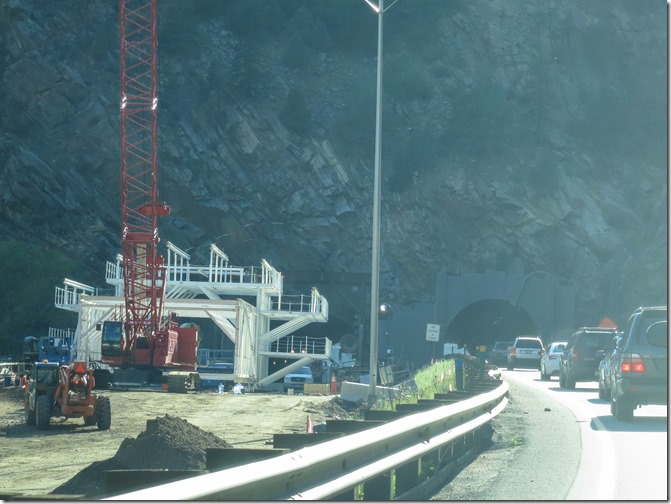 I finally arrived to Randy’s just as the sun was setting.  His girlfriend, Karen, made a lovely candlelit dinner on the patio and I enjoyed meeting her kids and seeing her cute Alaskan Malamute, Shine, again.

Later that night, the Lexus arrived to Clark’s house, and yep, the “Midnight Trucker” rolled in right around Midnight!   Randy and I met Clark on Saturday to walk through the car’s bells and whistles and sign all the paperwork.   After all the car transactions, I could now kick back and enjoy a nice weekend in the mountains!

Posted by Unknown at 11:05:00 AM 2 comments:
Email ThisBlogThis!Share to TwitterShare to FacebookShare to Pinterest
Labels: Colorado, Illinois

After 3 months off for family leave, I headed back to work on July 1st.  It being a holiday week, there was not much actual work to actually do except to wade through 3 months of email and start catching up on a few training webcasts.

The next few weeks were slightly more productive, and I was starting to get used to my work-at-home office routine again when I was told to attend a training class at our downtown Chicago office for an upcoming upgrade to our corporate software system.

Yeah! A break to the routine!

My 2 class days were pleasant and sunny—perfect weather for commuting!  I set my alarm early and scrounged around the closet for a few outfits that actually had zippered pants and shirts with collars!  I then dusted off my laptop roller backpack case and filled up my water bottle to be fully outfitted for the journey. 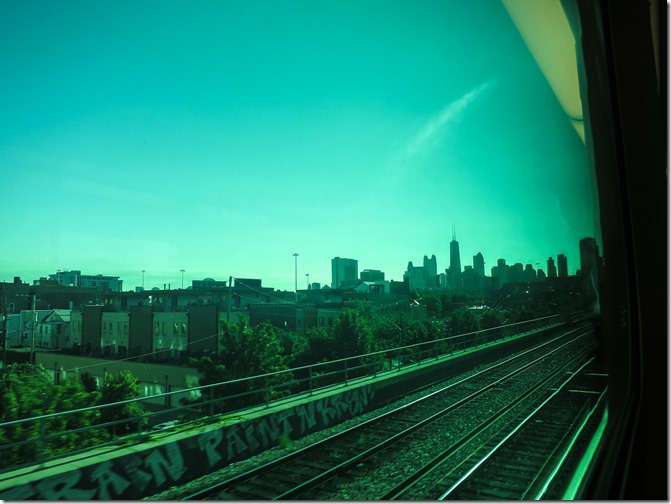 The green-tinted train windows gave a retro look to the city skyline as we approached downtown Chicago.

As we headed into the final mile before the station, lots of trains passed us heading back out to the suburbs to pick up more commuters-- 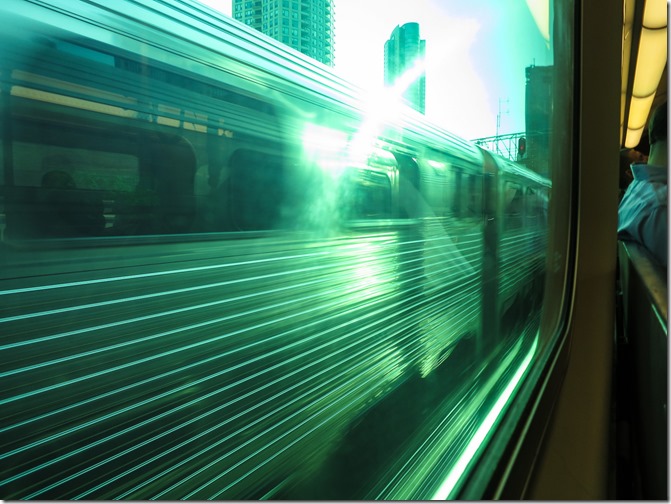 Making my way off the train and out of the station, I marched along with thousands of other “working stiffs” to our 9-to-5 jobs downtown.  Fortunately, in the summertime, the walking part of the commute is a wonderful way to get some sunshine and exercise as well as appreciating the beauty of Chicago’s architecture.

The walk across one of the Chicago river bridges is wonderful on a summer day (not so much fun in the dead of winter, though!). 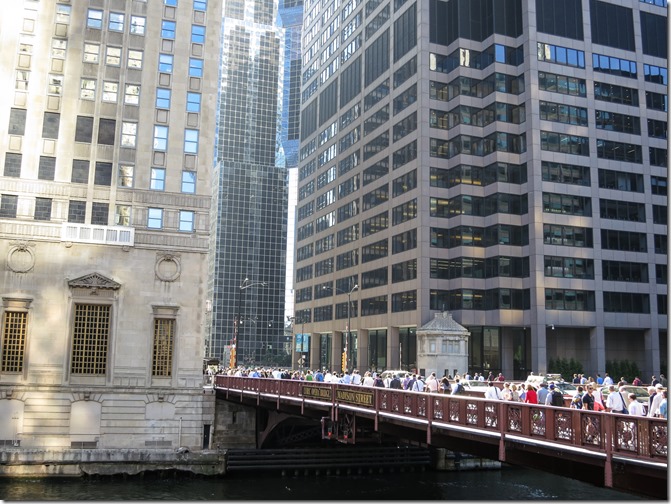 One fun way to get over to Michigan Avenue from the train station is to take the water taxi (I didn’t need to on this day, but they were still fun to watch). 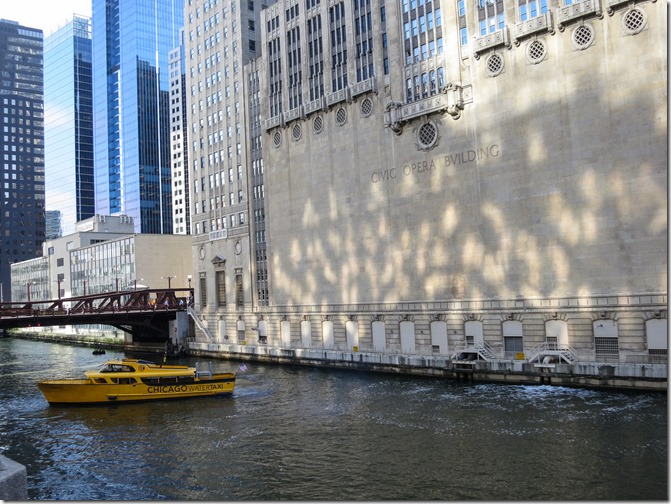 Part of my walk was beneath the art deco columns of the Civic Opera building.  It made me recall all the evenings of wonderful opera I attended here years ago. 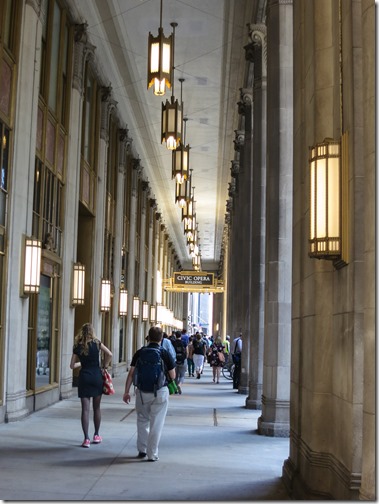 I then passed under the iconic “L” tracks that give the heart of the downtown district it’s name ("the Loop” is formed by elevated subway tracks that circle the very center of the city). 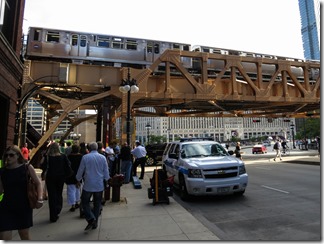 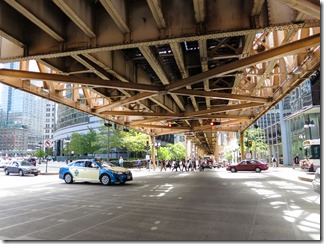 Finally, after about 6 blocks of walking, my office building was in view.  Merchandise Mart was the largest office building in Chicago at one time and was owned by the famous Kennedy political family.  Today, it houses a mix of interior design/home furnishing firms as well as high-tech companies like mine. 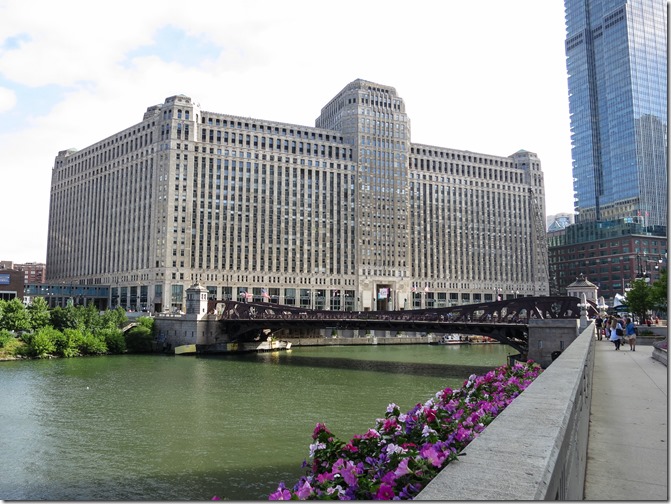 2 days was just about enough time to completely enjoy these daily commutes to the office.  Any more than that would have become the mindless, boring routine that I saw on the faces of hundreds of other commuters as they stood at their same spots on the train platform each day, sat in their same seats on the train, and marched the same well-worn path to and from their office buildings.   I used to follow that same routine 15 years ago when I worked downtown full-time, but thankfully, no more!

After the couple weeks of leisurely July work and the trip to downtown, it was now time for a vacation! No, seriously!!!  I have 5 weeks of paid vacation time to use up before the end of the year, so after my 2 days to downtown Chicago, I headed out for my first week-long vacation.  More details on that trip in my future posts!