After two weeks at a National Park campground (with electric hookups no less!), I was yearning to do some boondocking again and Millie was more than ready to find some wide open space where she could run around leash-free (the National Parks may be beautiful, but by their mandate, they cannot be as pet-friendly as other public lands).

So, with a family Thanksgiving on the horizon in Los Angeles, I decided to spend the 10 days before then at a spot headed towards that general direction-- exploring the area around Valley of Fire State Park at the north end of Lake Mead (about an hour northeast of Las Vegas).

Jim & Gayle were headed to that area a couple days ahead of me and had just the perfect boondocking spot to recommend just down the dirt lane from their site a few miles south of Overton, NV.  Oh, yes!  This site will do quite nicely! 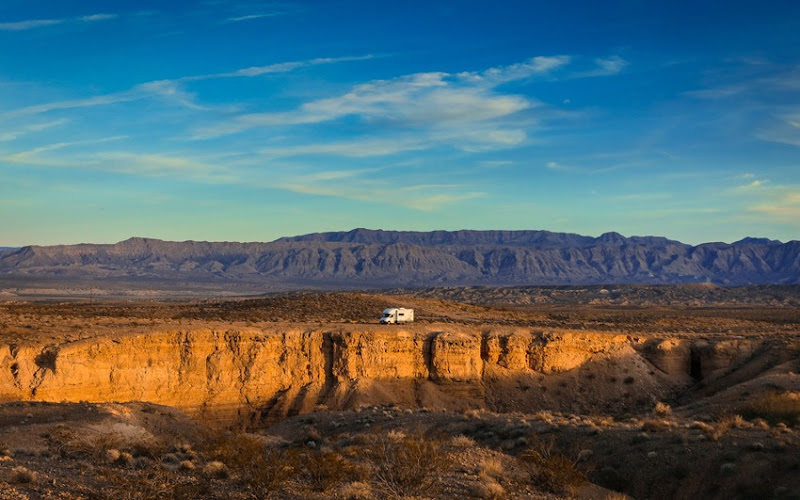 Overton’s little grocery store had all the necessities to welcome me after my 6 weeks in Utah— full-strength beer (none of the Utah 3.2% stuff), and even a row of slot machines behind the check-out lanes (yep, I’m now in Nevada for sure!).

The main draw of the area, photographically speaking, is Valley of Fire State Park.  I took a quick exploratory tour one afternoon and was delighted by the eye candy—brilliant red-orange rock formations throughout the park, and a center section along the Mouse’s Tank drive of multi-colored sandstone. 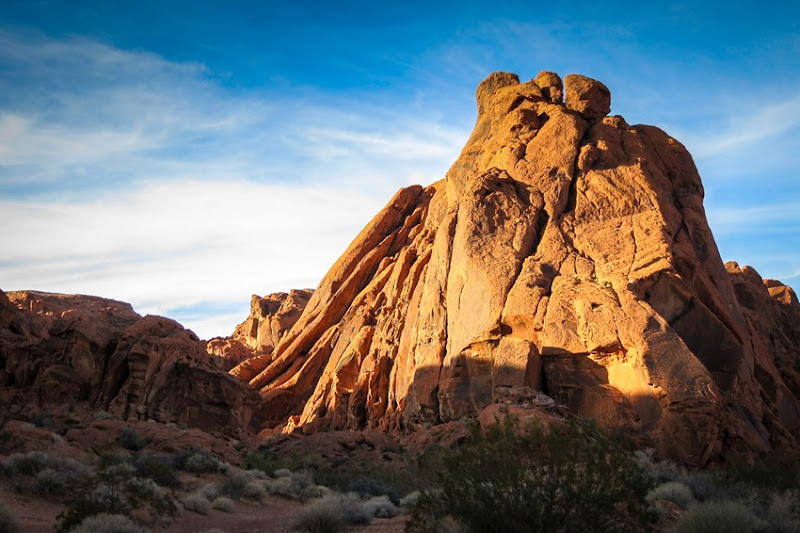 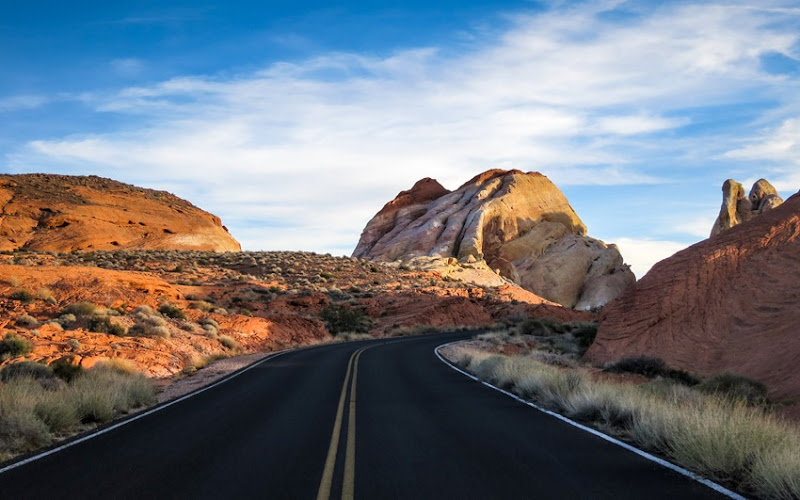 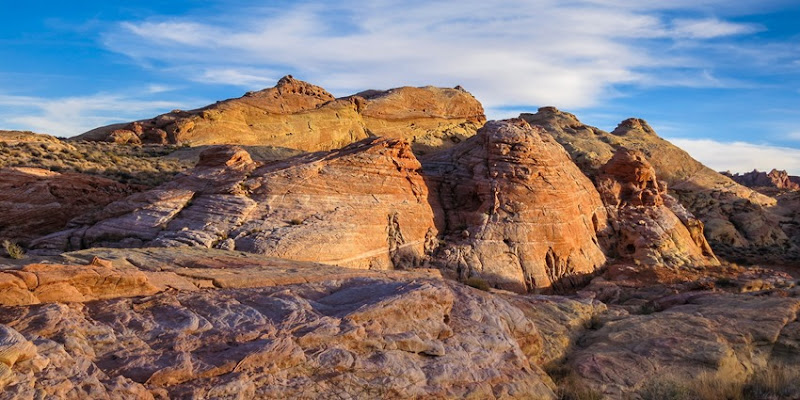 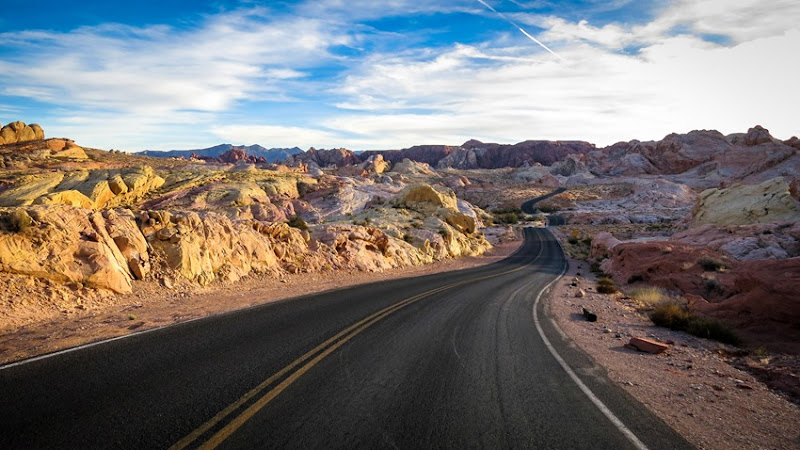 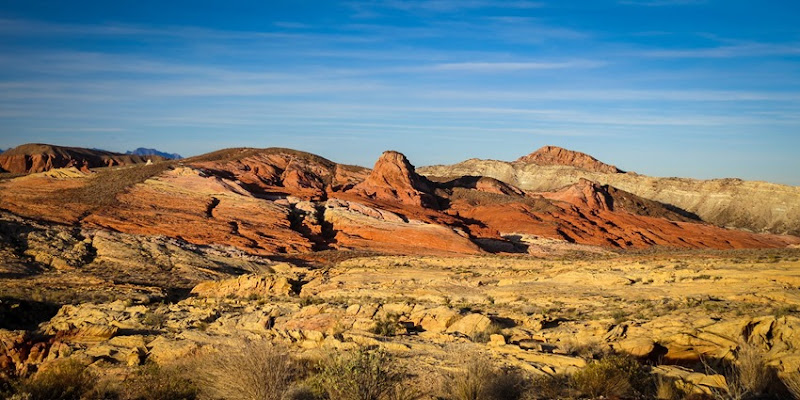 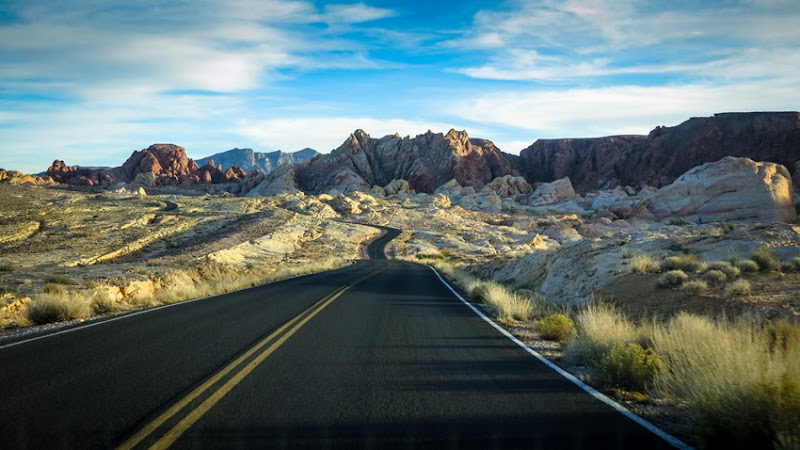 The park also is a popular venue for commercial enterprises as well (yes, we’re in Nevada now)—this film shoot was using a huge crane to  suspend actors in an old Jeep.  In another section of the park, a big limo-bus full of bridesmaids had just rolled up to their elaborate catered dinner (a long table with full china & silver place settings on white linen) beneath the brilliant red Seven Sisters sandstone spires. 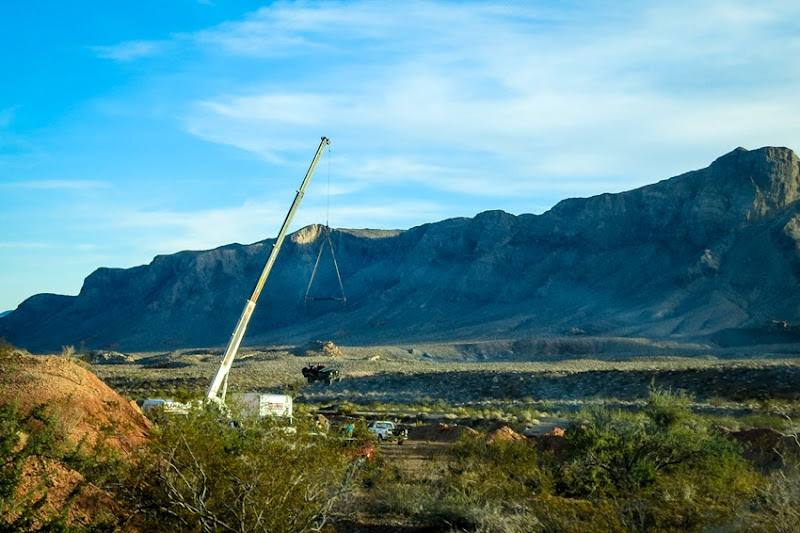 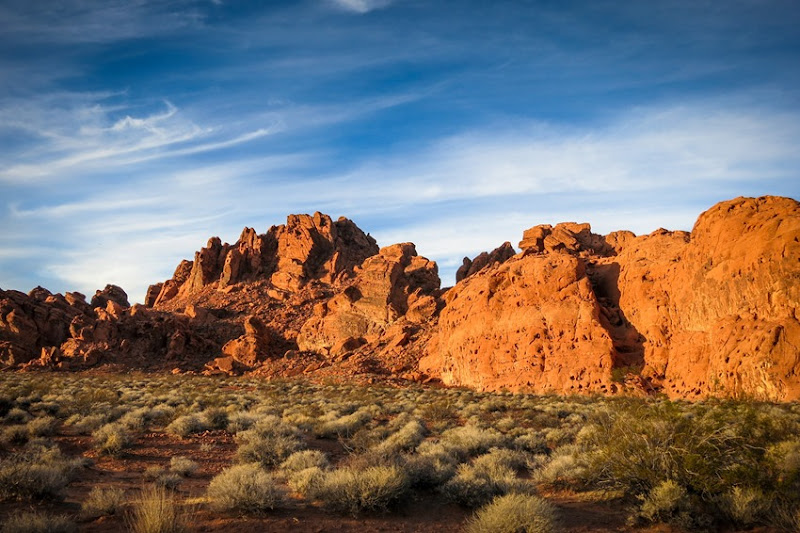 While I had thought I’d spend many more days at the park, most of the trails were on the short side (less than 3 miles), and the $10 per day entrance fee seemed a bit excessive if I wished to visit the park multiple days for only a couple hours each day.  On the other hand, the entrance fee also included free RV dumping privileges, so one day, I left the Tracker at my boondocking spot and drove the RV to the park!

On that day, I left Millie sleeping in the RV at the trailhead parking lot while I hiked the Fire Wave trail through the park’s most spectacular section of multi-colored sandstone.  The thin layers of red and white were spectacular in the late afternoon sun. 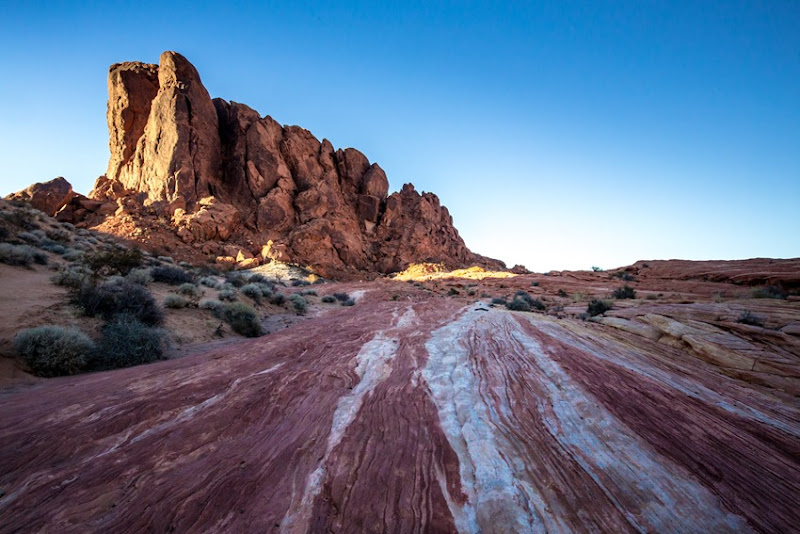 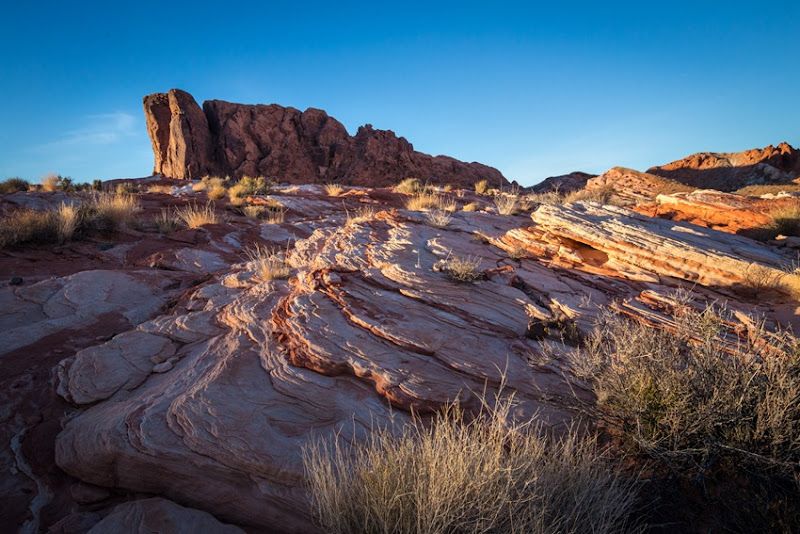 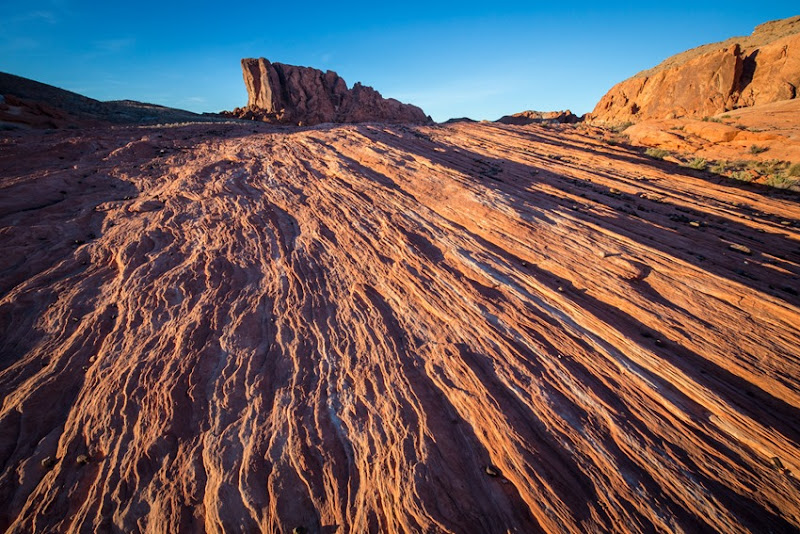 After about 30 minutes, I arrived at the main attraction—a couple of wavy-layered mounds of sandstone known as the “Fire Wave” 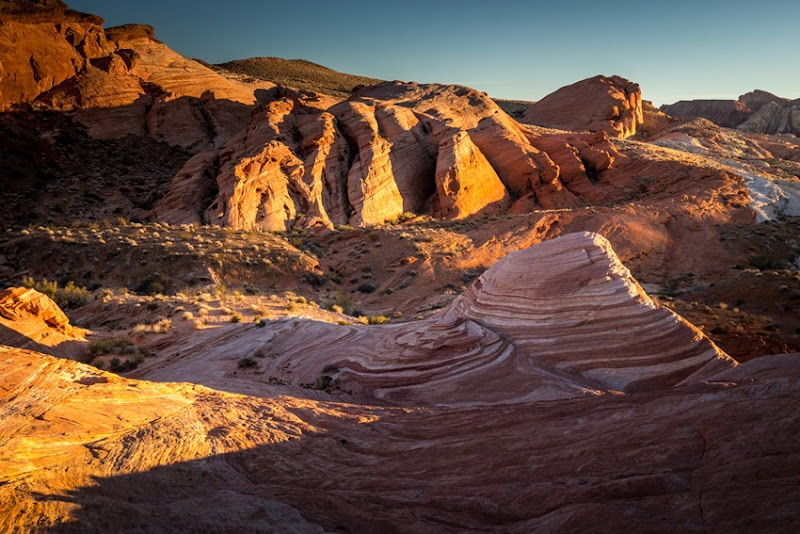 Of course, I first had to wait for other photographers to finish their shoots first.  These folks did not leave until the sun had set, so I could only shoot the top half of the rock while they were there. 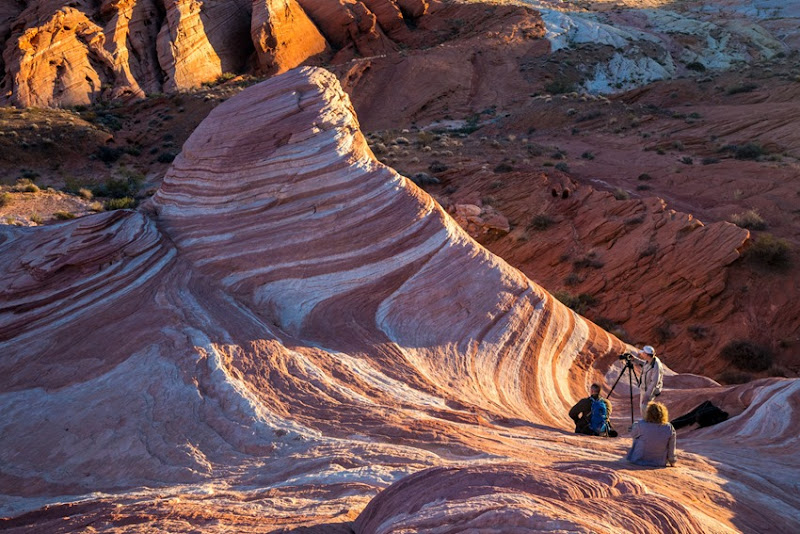 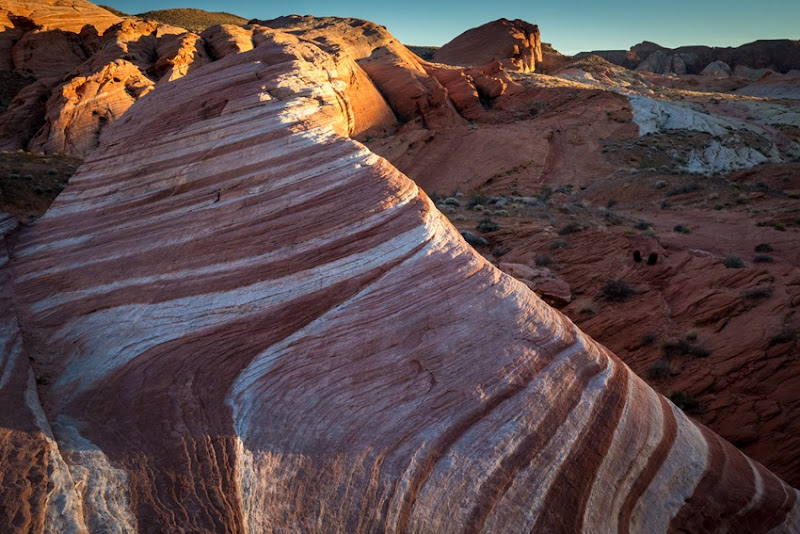 Once the sun was off the rock, the other photographers left which was just fine with me. I kind of liked the softer, more even “post sunset” lighting anyway! 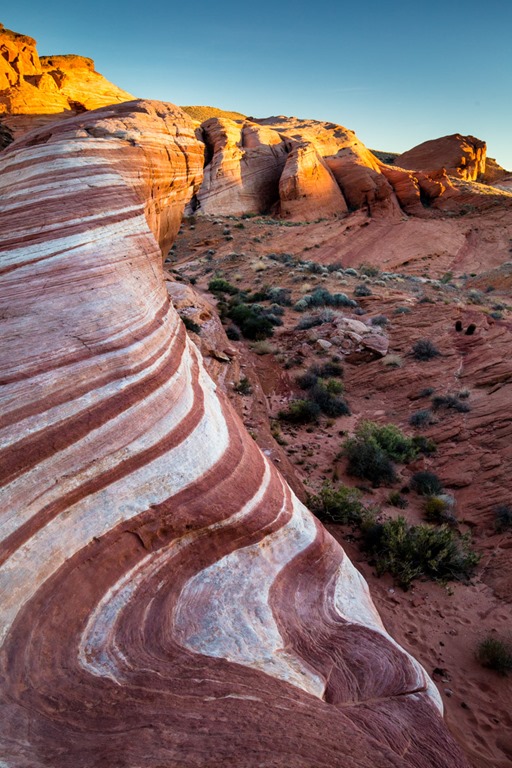 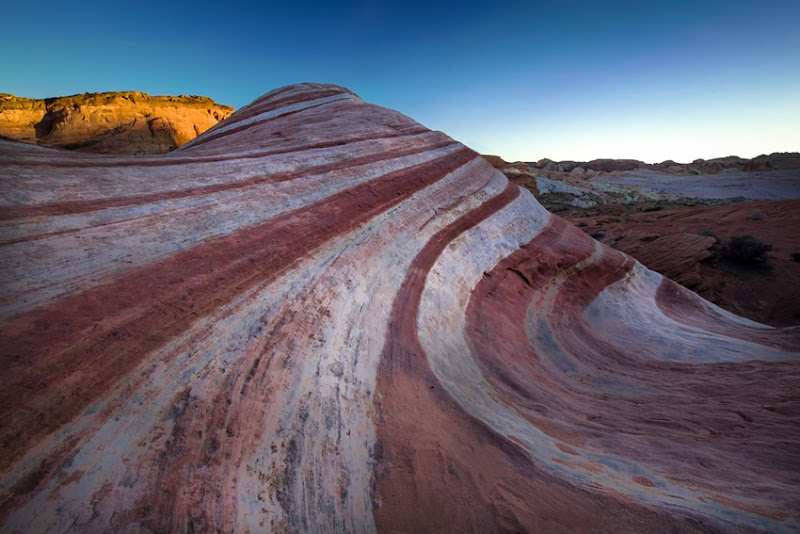 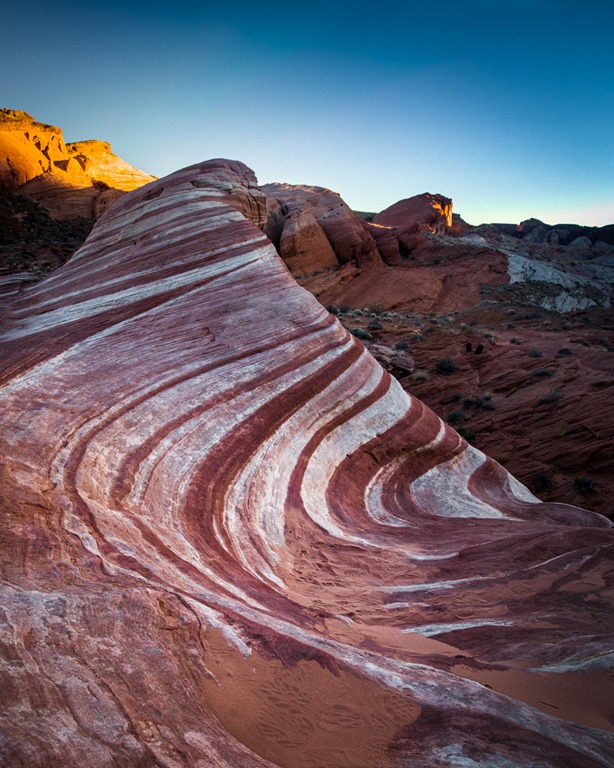 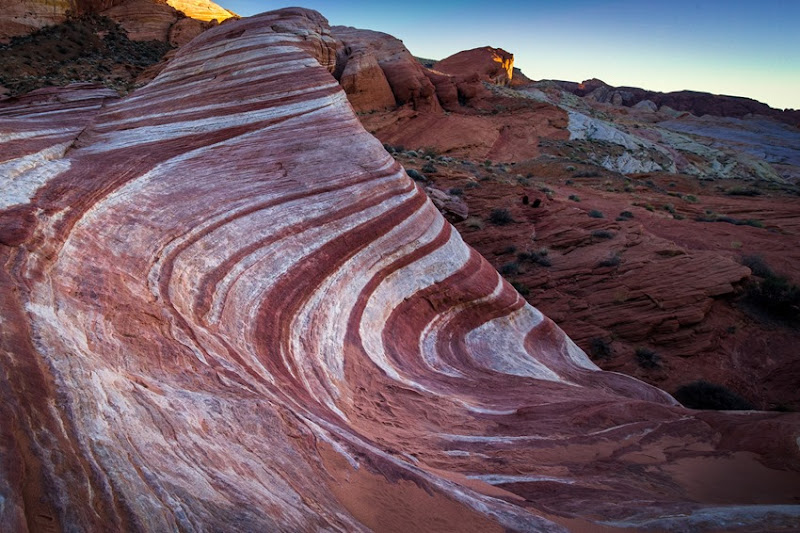 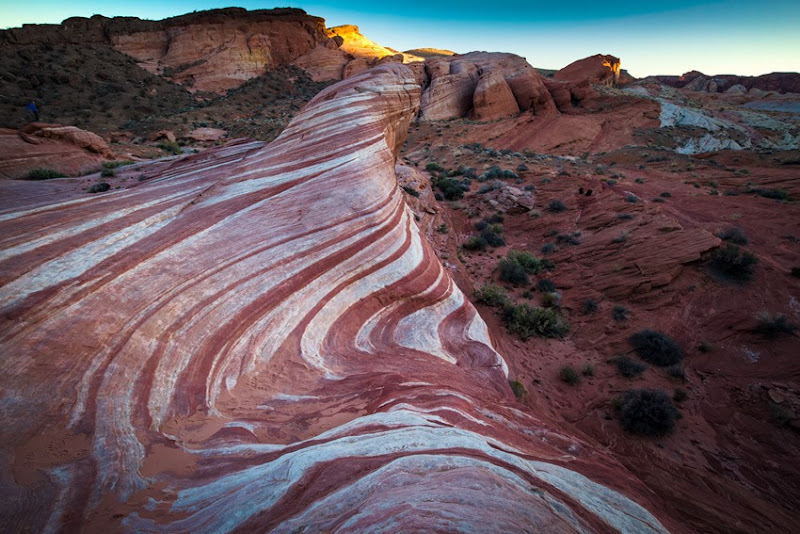 Heading back to the parking lot, it was now getting pretty dark, but the camera sensor can still get some pretty incredible shots during this so-called “blue hour” after sunset (but only if you have a tripod!).  Here’s the same shot as the first trail photo above.  See the difference? 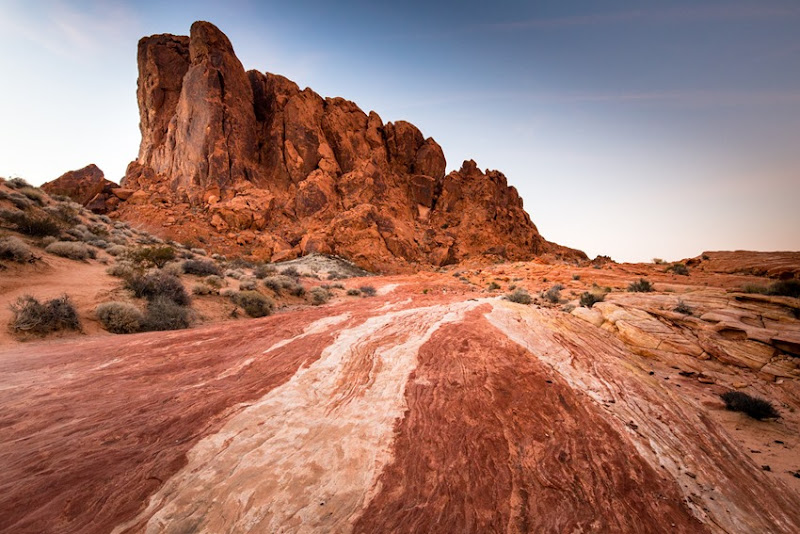 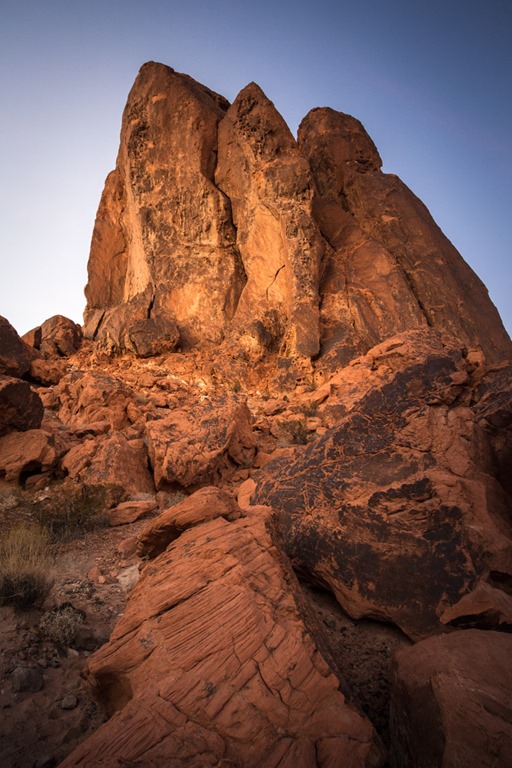 But as pretty as Valley of Fire was, I rather liked the quiet serenity of my boondocking spot even more—where I usually only had 2 or 3 other RVs within view, and never close enough to bother each other with generator noise, etc.  A girl (and her dog) could get REALLY used to this! 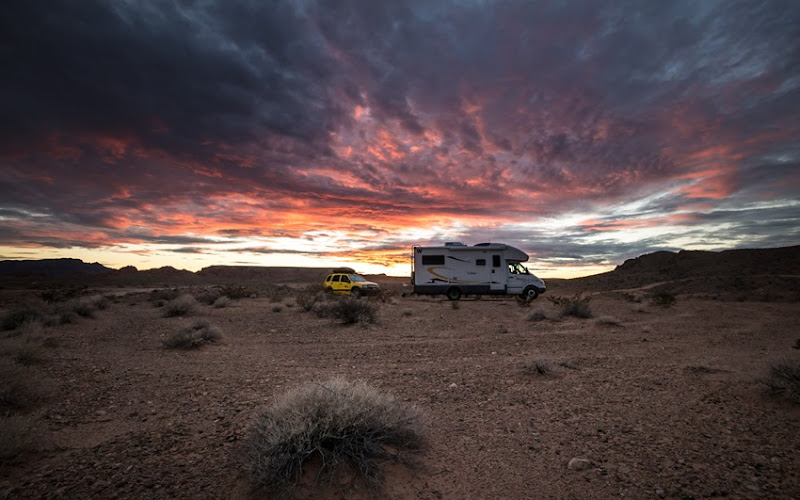