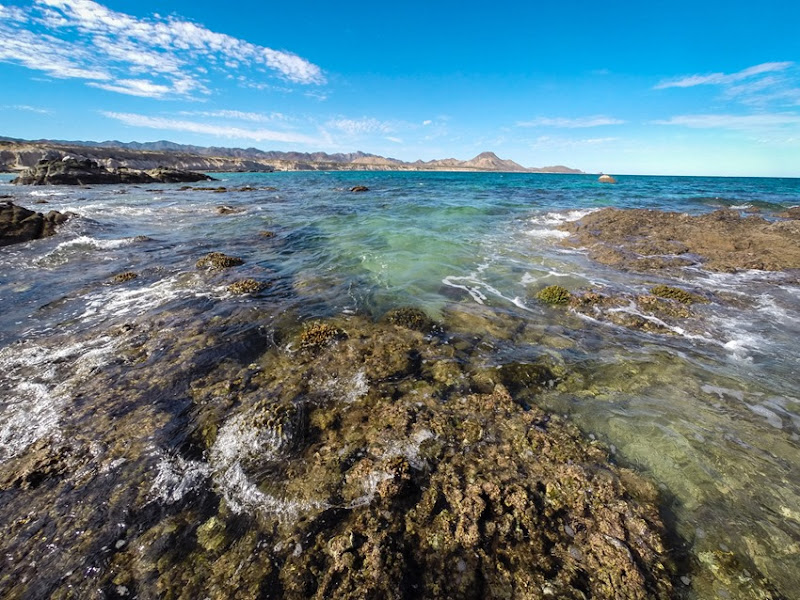 Our final day trip of the bottom of the Baja peninsula took us from La Paz to the East Cape’s Cabo Pulmo National Marine Park.  Established in 1995, its mission is to preserve one of the finest examples of live coral reef in Mexico (and one of the best diving destinations closest to the U.S.).

As we turned off the 4-lane highway headed to Cabo San Lucas and Todos Santos, the road leading to the east cape was decidedly less crowded. 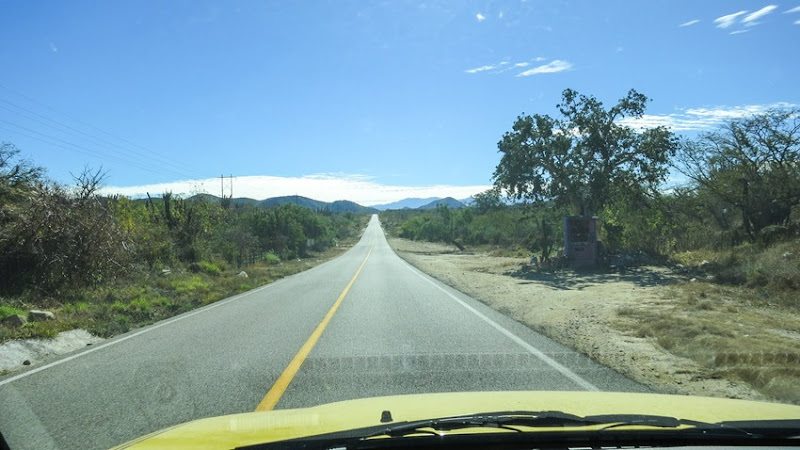 Well, all except for the occasional cow crossing the road! 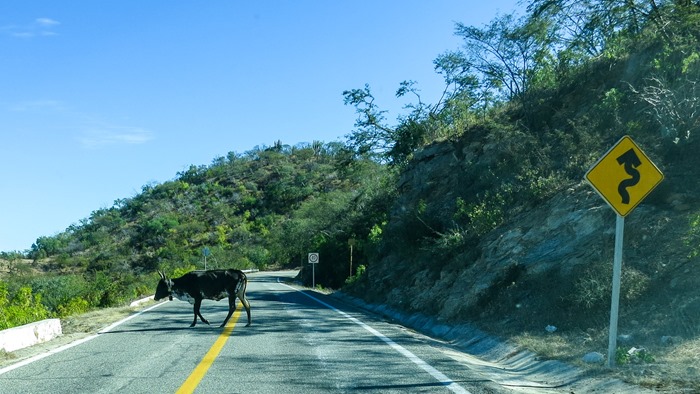 This part of the cape is sparsely populated by humans (except for the small beach town of Los Barriles), and is much “wilder” and mountainous.  As we reached the national park boundary south of Los Barriles, our 2-lane paved highway turned to sand.  Thank goodness for 4-wheel-drive! 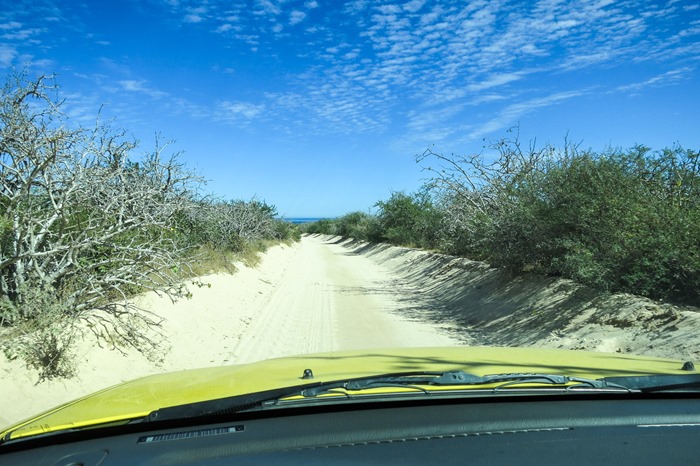 After about 10 miles, we arrived to the small village of Cabo Pulmo, but it seemed most of the residents were probably out leading diving tours (that originate from there), as the town itself seemed rather deserted at mid-day.  So we continued a few miles further south to a scenic swimming beach that La Paz friends Wendy and Bobby had highly recommended—Playa Los Frailes.

Upon paying a small entrance fee (to cover costs of the trailer they have set up behind the beach that provides flush toilets and changing rooms), we unloaded the Tracker and headed to the beach.  Take a guess who was the first one to race into the water! 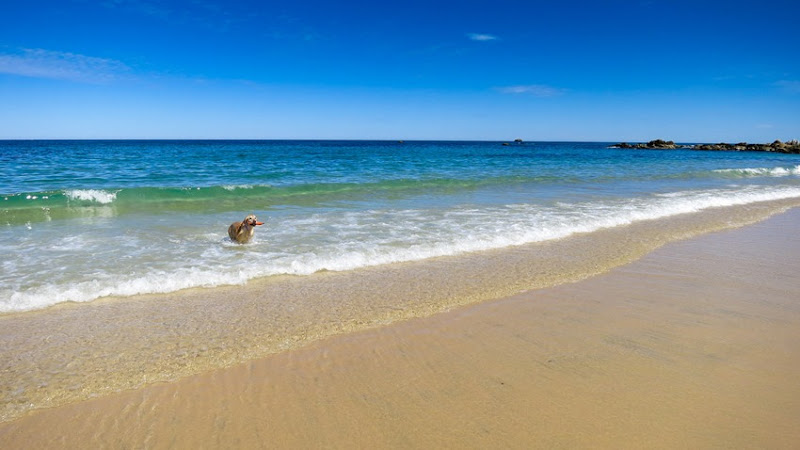 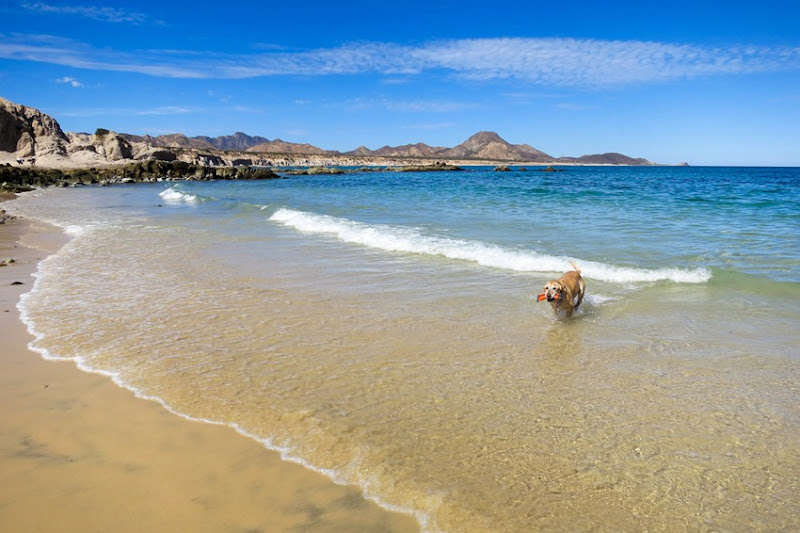 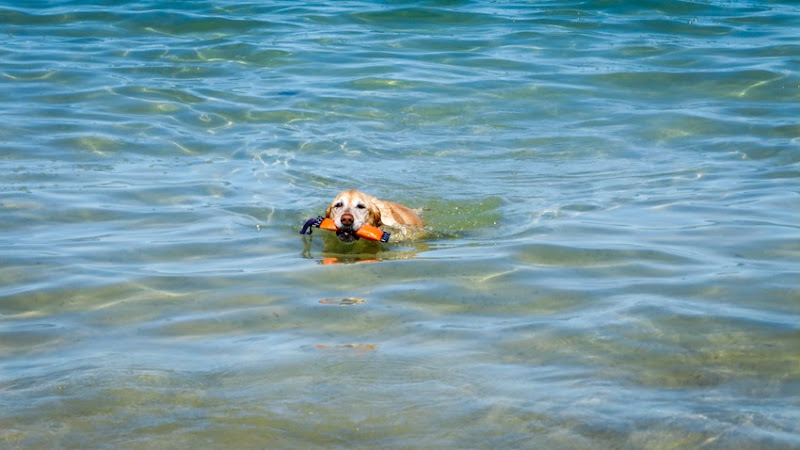 As Millie swam, Hans and Ursula walked up the rocky beach to check out some of the tide pools. 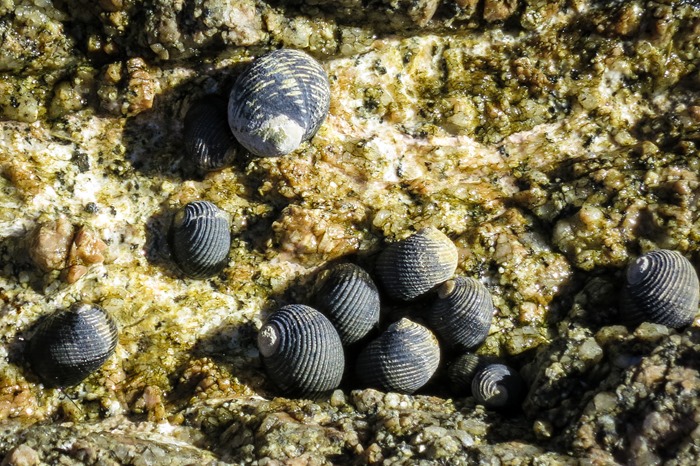 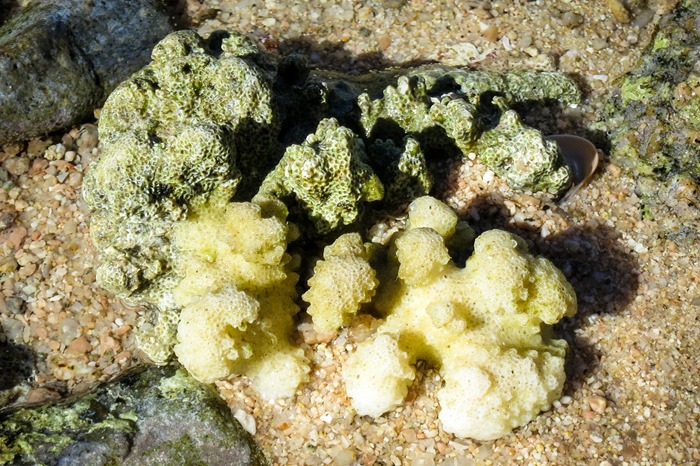 The beach from this direction, was pretty impressive. 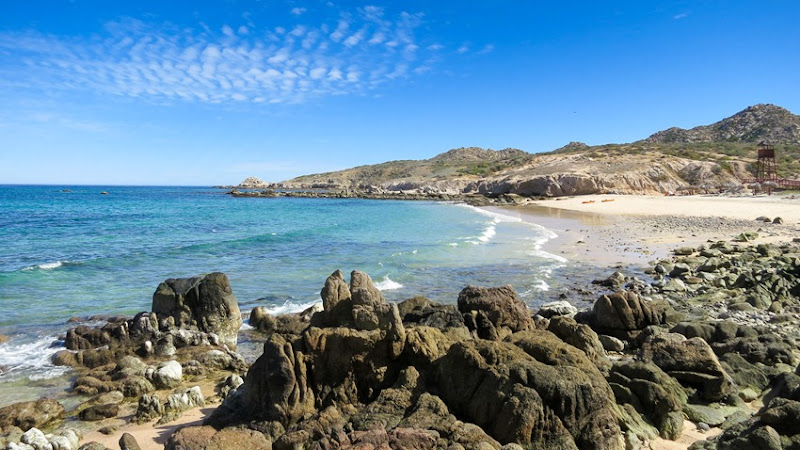 We had heard that there was good snorkeling just off the shore, and indeed, saw this group of hunky, half-dressed men returning from their adventure as we headed to check it out. 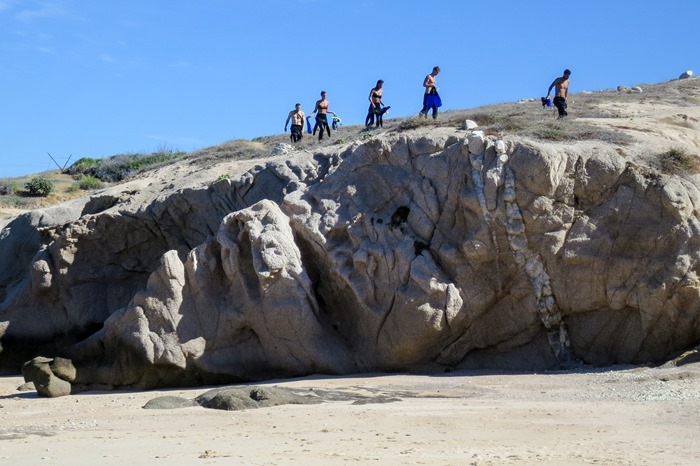 The winds and waves were now starting to pick up, so it was decided that just Ursula and I would get suited up for a snorkel, and Millie would need to stay behind with Hans.  She was not too happy with this decision! 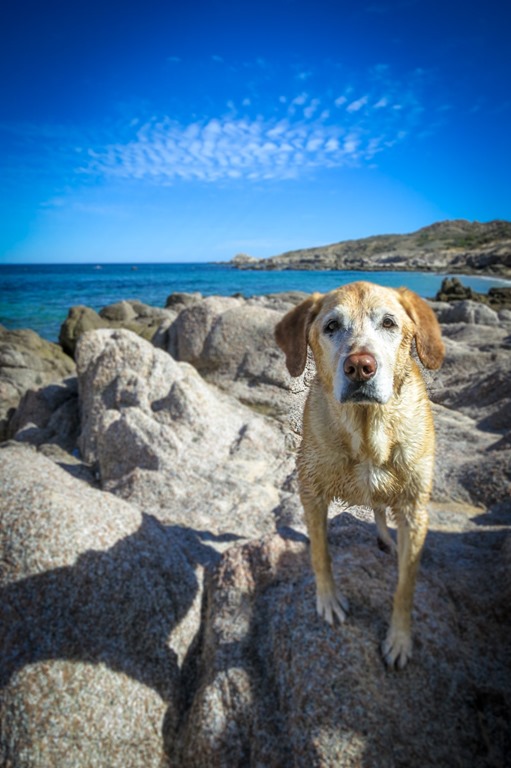 Ursula and I found a small opening amongst the rocks that was somewhat protected from the surf, so we carefully navigated the slick rocks in our water shoes to head into the water.

What lurked just offshore beneath the surface was incredible-- lots of interesting, colorful small fish! 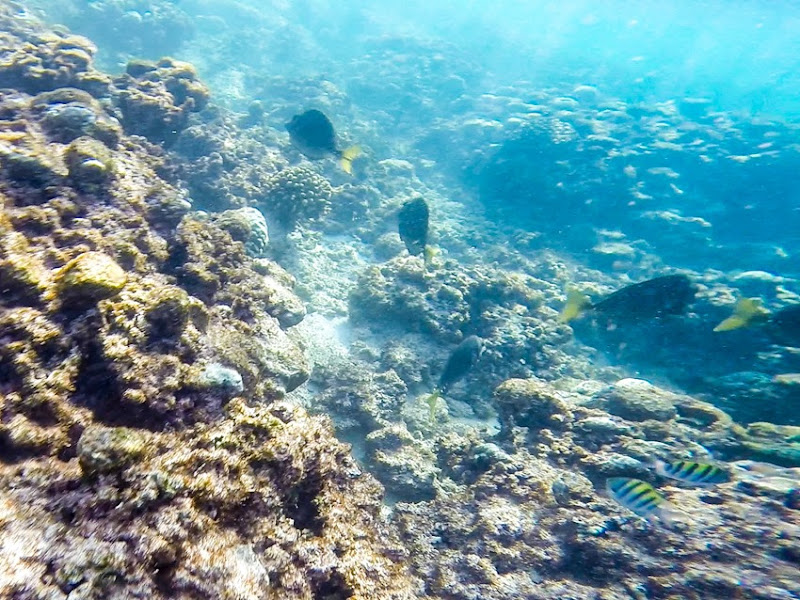 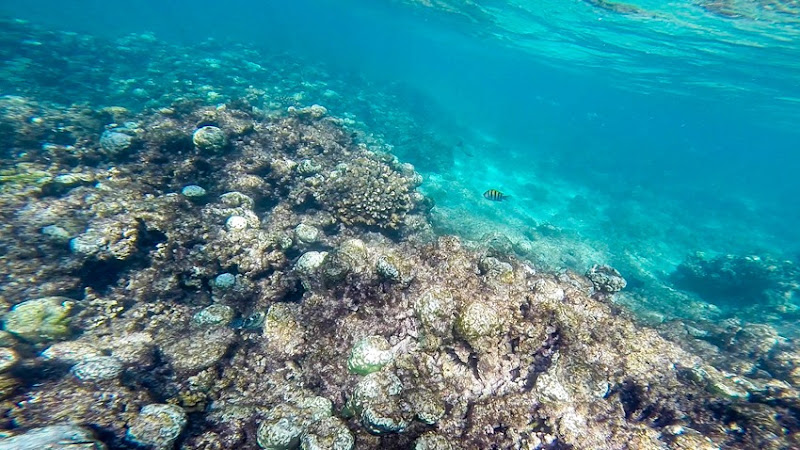 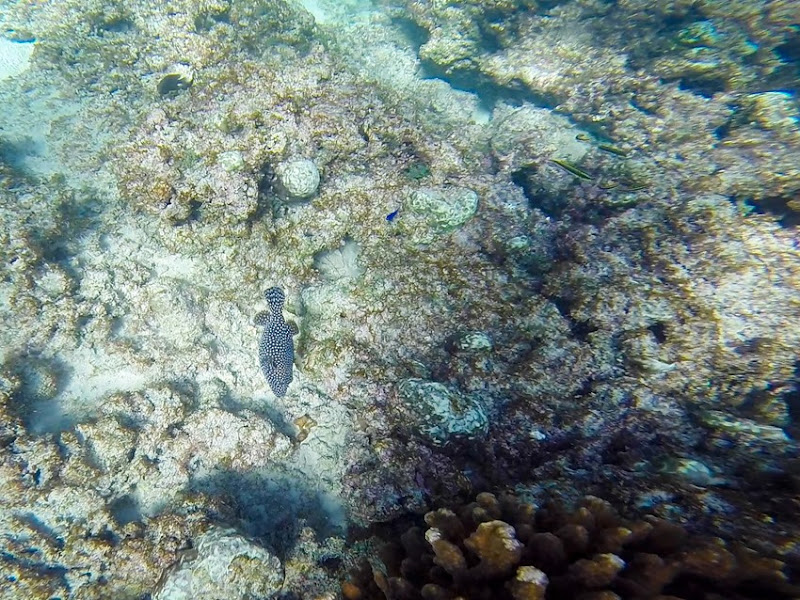 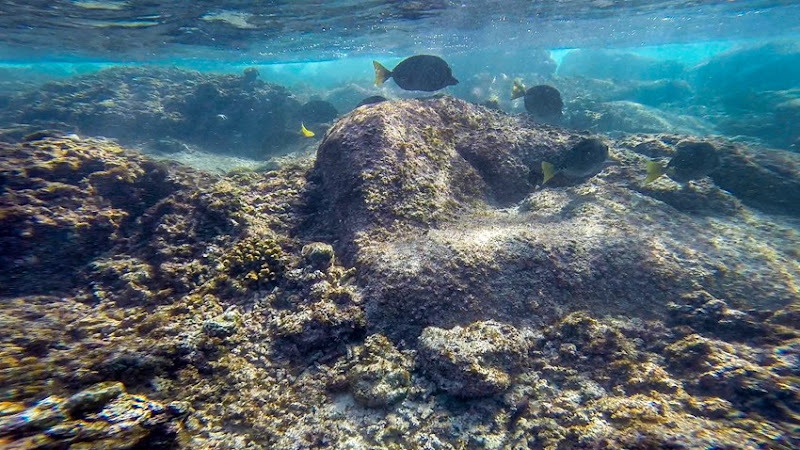 And some plant life as well-- 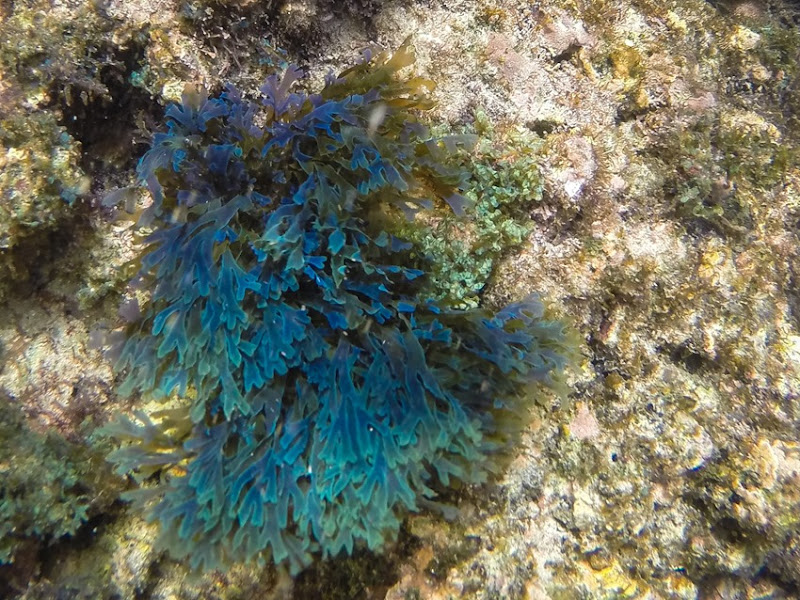 I wished we could have taken the boat snorkeling tour further offshore to see the actual reef, but that adventure will need to wait for another trip.  It was now late afternoon and we needed to bid a fond farewell to Playa Los Frailes to begin our 2 hour drive back to La Paz. 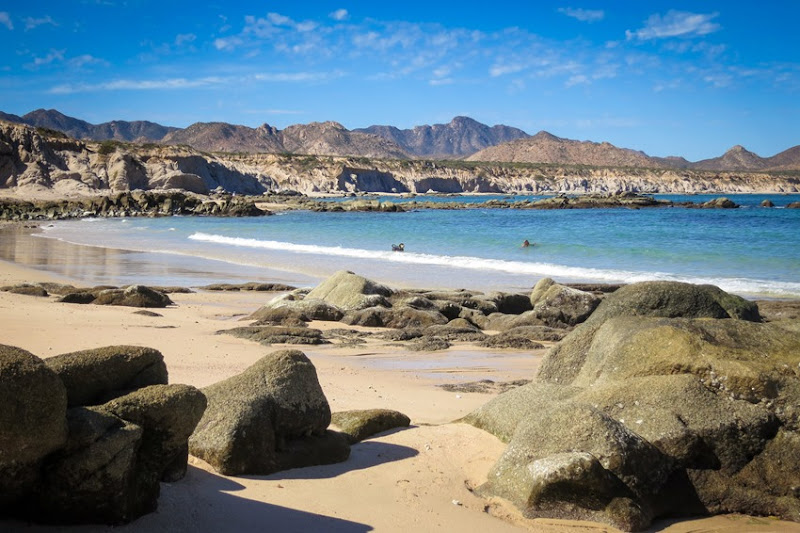 Along the way, we spotted this enormous example of a Cardón, the largest species of cactus in the world that are native to Baja and Sonora.  While it’s hard to get a sense of the size of this one, it was certainly over 40 feet tall-- that’s a 2-lane paved highway just to the left of it! 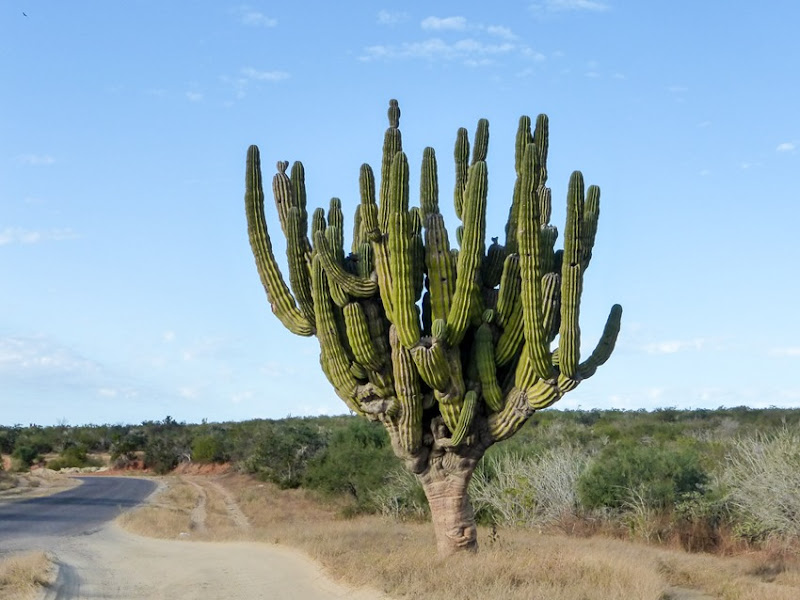 As we came back down out of the highlands, the sky was putting on quite a show to end the day. 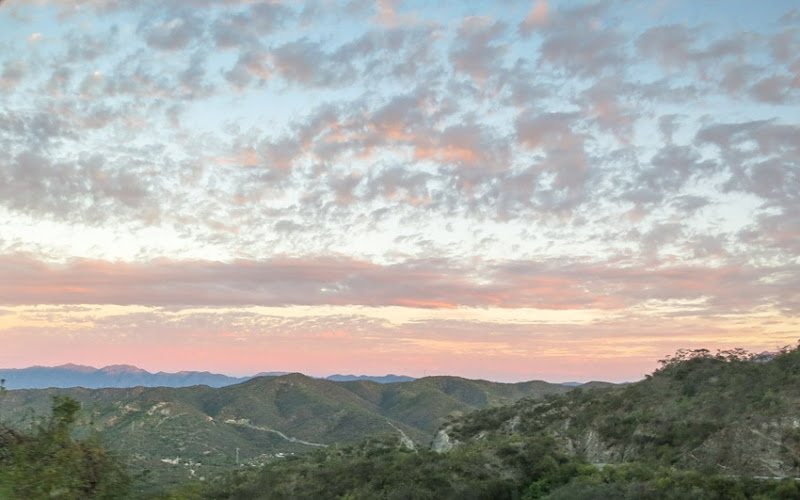 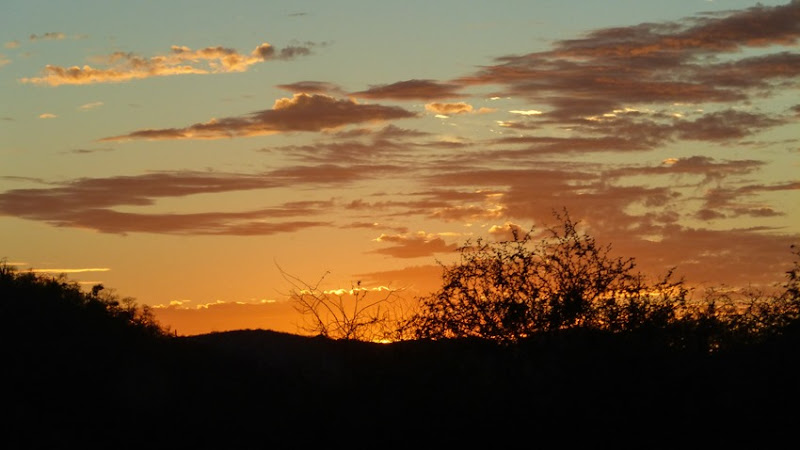 With one more hour still left to drive to La Paz, I was now breaking one of the cardinal rules for Mexican travel—driving at night!  Fortunately, we had made it back to the 4-lane divided highway by that time and had plenty of other cars around us, with the added bonus of getting to see the carnival all lit up as we finally arrived back into town!  What a day! 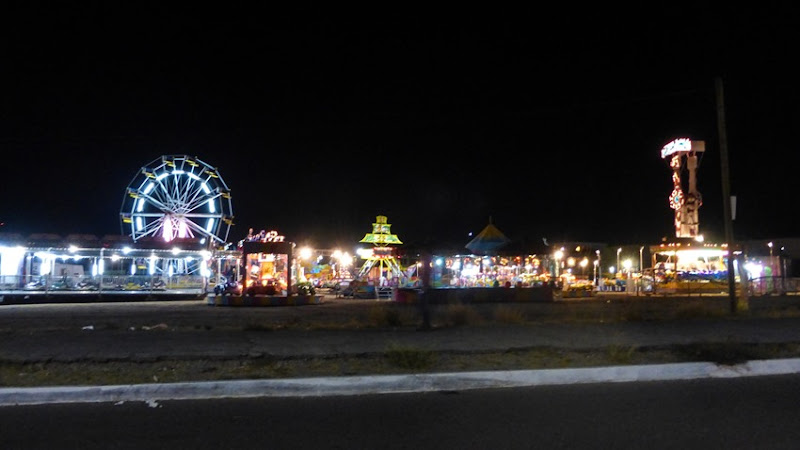 Posted by Unknown at 11:50:00 AM
Email ThisBlogThis!Share to TwitterShare to FacebookShare to Pinterest
Labels: Baja Sur, Mexico, Millie, Snorkeling