After a week-long 1,500-mile trip from New Mexico, and a terrific “welcome home” dinner with family, I had a nice few days of rest here at my favorite Chicagoland campground, Burnidge Forest Preserve. The weekend concluded with a sunset poking beneath these dramatic springtime Midwest storm clouds. 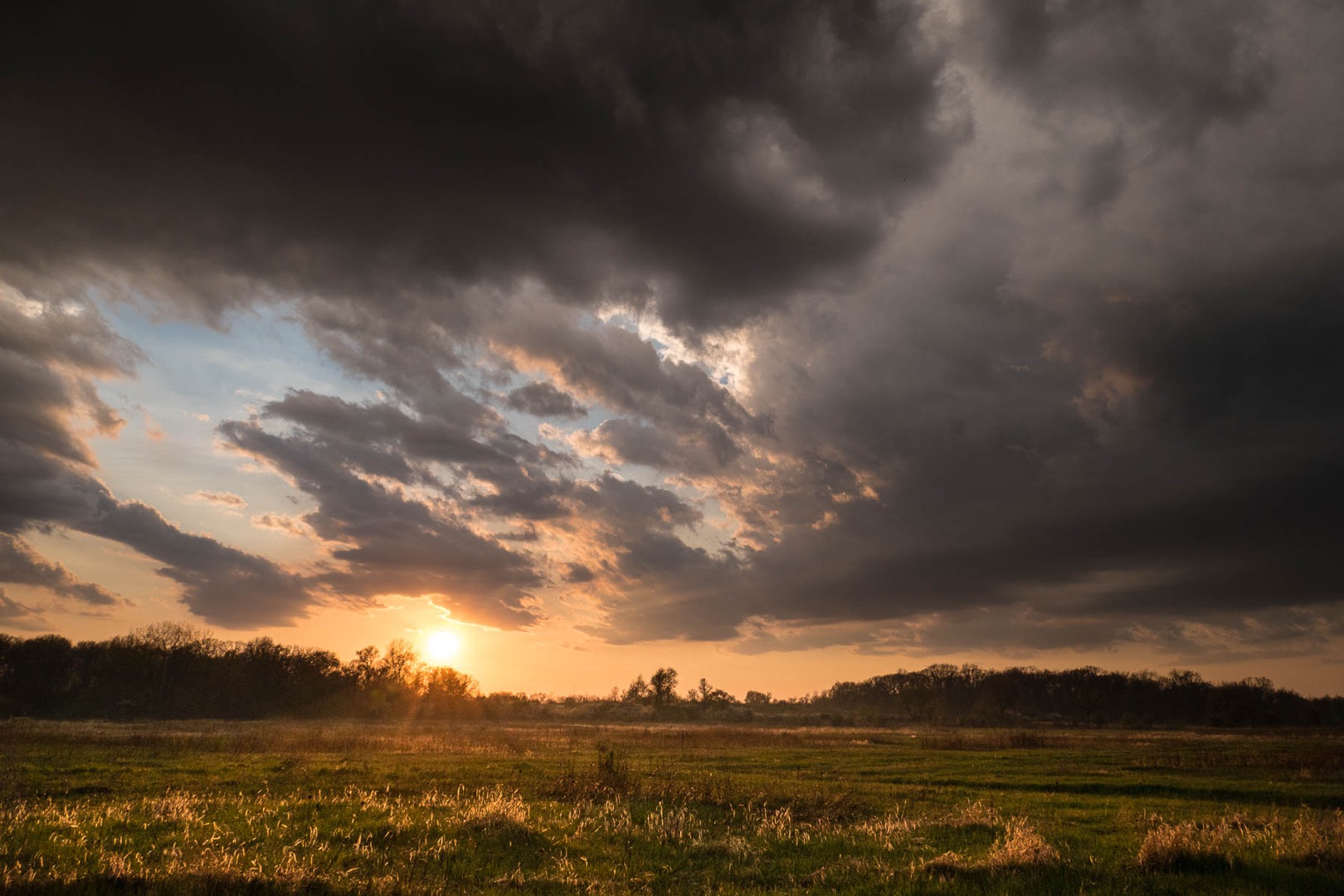 This photo was taken my newest camera, a Panasonic Lumix FZ-1000, that I bought last month as a super-zoom point-and-shoot for capturing wildlife. Unlike most superzooms, this one uses a larger 1” sensor and a higher end Leica lens for much improved image quality. While it’s not “pocketable” like some smaller, cheaper, far lesser-quality superzooms, it still weighs less than 2 lbs and is much more portable than the 2 Canon DSLRs I had been lugging around the Refuge! (that combo, using one for landscapes and the other for wildlife, weighed in at over 10 lbs!). 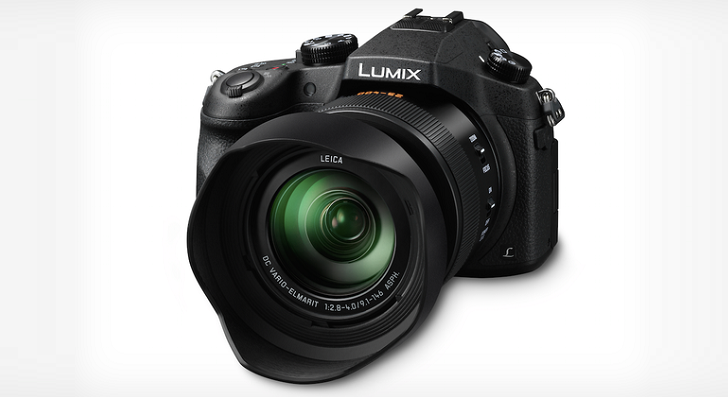 The FZ-1000 has an optical zoom range of 25-400mm, but also has some additional crop and digital zoom capabilities to get all the way to 1600mm if needed. Image sharpness is outstanding for a point-and-shoot— this white-faced ibis was a few hundred feet away from me, but zoomed to 560mm, the image is still sharp and crisp! 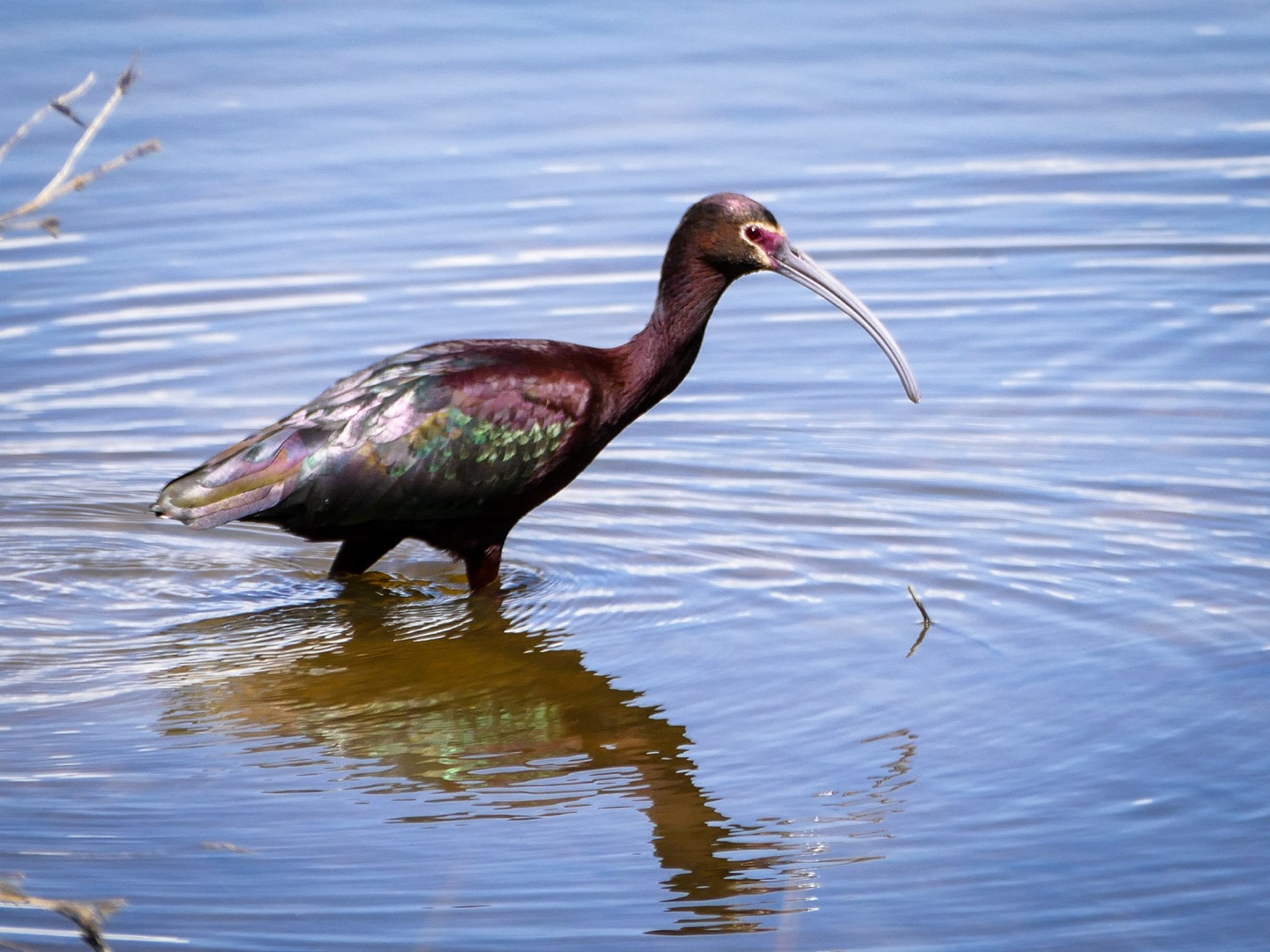 So while I still like my Canon 6D for serious landscape work, this Panny FZ1000 has quickly replaced my Canon 70D for general walkaround, travel, and wildlife photos. Anybody interested in a gently used 70D with a Canon 100-400 L lens?!!!

As my medical appointments here in Chicago drew near this week, I did what any other nervous gadget girl would do — headed to the Apple store to treat myself to another calming, soothing “i-device”!

My temporary defection to Android last year has now concluded. I am now solidly back in the iOS camp!

The LG G2 phone I bought from Verizon last summer was big, beautiful, and supposedly unlocked. But it began revealing a few nasty surprises this past winter in Mexico. While, yes, it did indeed accept SIM cards from other carriers and allow me to make calls and surf websites, when I went to turn on WiFi hotspot sharing in Mexico, a Verizon screen popped up saying I could only use that standard Android feature with a Verizon SIM! Outrageous, but not entirely unexpected behavior from Big Red (who loves to add all sorts or bloat and crippleware to their phones). I should have known better!

Yes, I could have searched around for detailed instructions on how to install generic Android over the Verizon-crippled version, but why bother. After 6 months, the phone was already starting to show some battery and charging issues (like not being able to recharge when Google Maps navigation is in use!).

So now that Apple has released some iPhones with bigger screens (for us old, blind geezers), it was worth the price to buy something again “that just works,” as Steve Jobs used to say. I bought an unlocked SIM-free iPhone 6, and delighted in slipping my Verizon Prepaid SIM card into a phone that is truly unlocked and full-featured for just about any carrier worldwide I’d ever wish to use!

With my shiny new pacifier now in hand, I nervously headed off to the first of many medical appointments for this season in Chicago.

I met my gynecological oncologist and her team on Wednesday and was immediately comfortable and at ease with all of them. No major surgery is a “slam dunk,” but as cancer surgeries go, my case poses fewer complexities than many other patients my doctor sees, so that gives me reassurance. I left with a surgery date just 6 days away (May 12th) and a long to-do list of pre-op testing and things to get done before then.

After getting all the medical to-dos completed in just one day, I focused yesterday on confirming that my newer insurance company, Land of Lincoln Health, would cover all the oddball variety of services and providers to be associated with my hospital stay.

When signing up for my 2015 ACA (healthcare.gov) health plan back in December, I had decided to switch from Blue Cross/Blue Shield (my insurer for the past 15 years), to a new non-profit co-op, Land of Lincoln Health (LLH). Their premiums were $100 less per month, and the only caveat to using LLH would be if I chose an out-of-network provider. Out-of-Network charges would not be subject to any out-of-pocket maximum limits (so I could potentially pay unlimited amounts). But, after searching their PPO directory for various places around the country, their in-network providers seemed almost as extensive as Blue Cross, so I figured I’d always have plenty of in-network providers to choose from whereever I happened to be.

All started out fine in New Mexico last month— my provider and labs there were all in-network. When I chose who to see in Chicago, I also was pleased to see my provider and hospital of choice also in-network as well. So, I figured my call yesterday would be pretty routine and uneventful.

Over the next few hours, both I (and my Doctor’s nurse) were shocked to learn that not one of the 40+ anesthesiologists who practice at their hosptals are considered in-network by Land of Lincoln Health. Not one!

So, that raised up some red flags and I started searching for some recent user reviews of LLH. Back in December, there were hardly any (as they only had 4,000 members last year). But this year, since 50,000 of us had now decided to give LLH a try, there were many more reviews out there…and almost all of them horrendous!

I was beginning to feel like I suddenly had no insurance at all as I read further news reports of new ACA Co-ops (like Land of Lincoln) who were in potentially dire financially shape (the Iowa co-op recently closed up shop suddenly and sent its 100,000 members scurrying for alternate insurance).

Within an hour, I now seemed to face this very daunting decision--

Do I pay the unknown anesthesiologist fees and any other unknown and unlimited out-of-network fees (in addition to my hefty in-network out-of-pocket maximum) to get my surgery as soon as possible next Tuesday? What if LLH goes bankrupt in a few months before reimbursing the hospital and I’m on the hook for those expenses as well?

Thankfully, there was an alternative.

Due to my income changing last year, and me now having a tax return and other records to prove it, and due to Healthcare.gov’s Special Enrollment period, I was able to switch my Land of Lincoln plan to a Blue Cross Blue Shield plan with a lower deductible and, best of all, capped maximum out-of-pocket costs for both in and out of network (that will be substantially less than the old LLH plan).

The only downside? The new plan won't go into effect until June 1st.

A few more phone calls ensued— I called BCBS to verify that full benefits would be available as of the first day of the plan (without any kind of 30 or 60-day waiting period for major expenses like old, pre-ACA plans used to have). They answered “Yes, you’ll be fully covered as of Day 1"

Next, the nurse called my doctor to see what the medical risks would be to the delay. While it might complicate things a bit more (bigger tumor, etc), the doctor didn’t think a 3 week delay would change my outcome all that much as she’s guessing this will turn out to be the more-common, less-aggressive kind of endometrial cancer. But it’s only an educated guess at this point— she won’t know for sure until surgery.

So for better or worse, I made the gut-wrenching decision to postpone surgery until the beginning of June and wait for the added strength and security of BCBS. There’s a reason their plans cost more, and I just learned it!

Whether it be Apple iPhones, more expensive point-and-shoot cameras, or health insurance— the old adage proves true once again: “you get what you pay for."