Busy Days on the Refuge & a New Job

Since the 18 new volunteers arrived 2 weeks ago, it’s been a flurry of activity here at Bosque del Apache NWR.  Between training sessions, pot lucks, and preparing for the big Festival of the Cranes (that starts this Tuesday), it’s been an exceptionally busy time.  Add to that, a new job for me here on the Refuge, lots of new major personal legal/financial changes to plan (as a result of the new 2016 ACA Healthcare plans), and a little episode of nearly burning down my RV last week….and I’ve felt rather scattered in 101 directions this month!

Sorta like these snow geese.  One day they’re enjoying a nice relaxing sunny afternoon resting in one of the ponds… 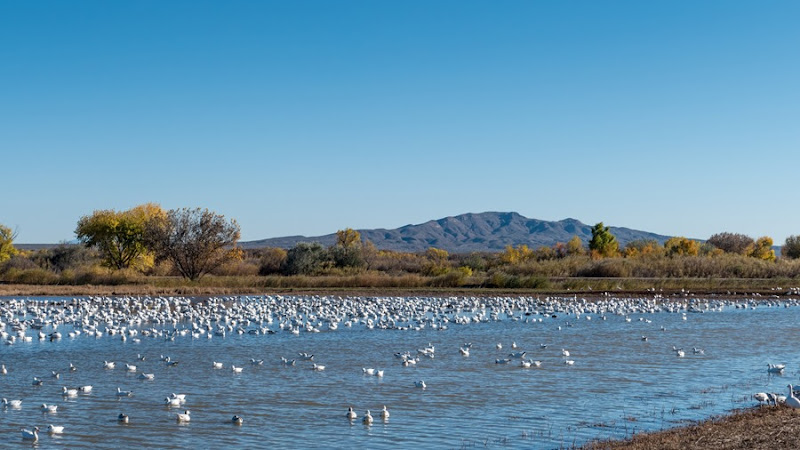 and the next day they’re buzzing over the tourists’ cars fleeing for their lives! 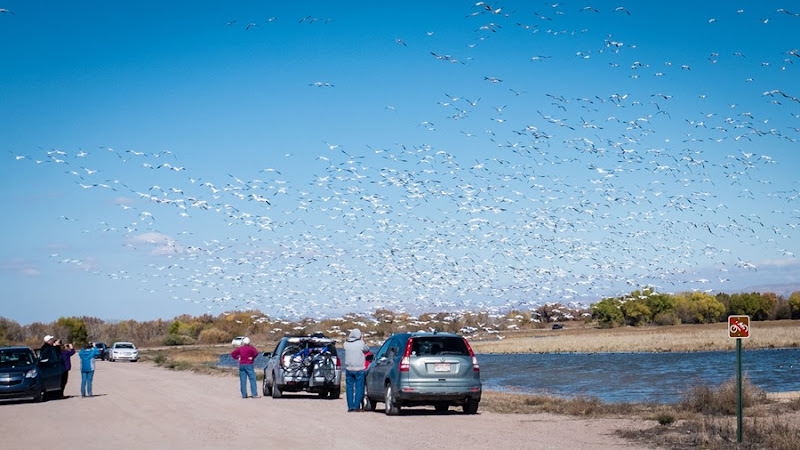 all because of one new bird arriving at the Refuge to throw their normal daily routine into total chaos…the Bald Eagle! 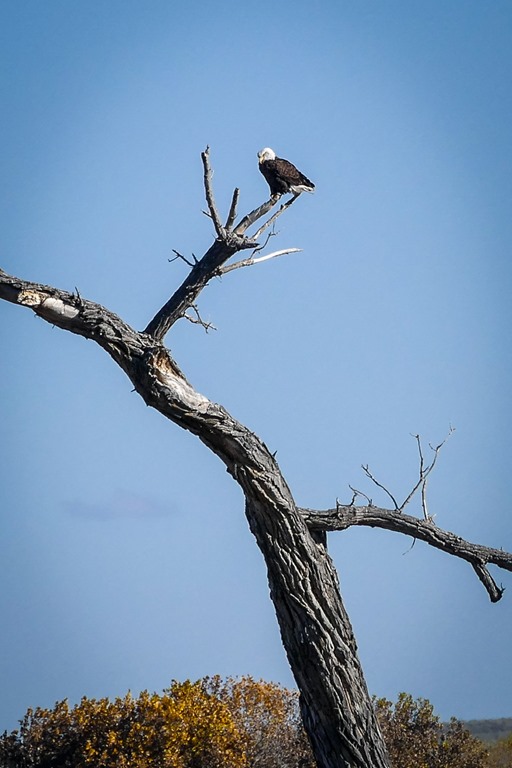 One night last week, I noticed my circuit breaker flipping a few times whenever I ran my ceramic heater.  I’d been running the heater fine for a few weeks before that, but now suddenly, it was flipping breakers!  I finally just unplugged it and thought all would be well, until the next morning when I was running my hair dryer and smelled a slight burning smell coming from my RV’s converter panel.  Still, my electric appliances continued to function and no longer were flipping breakers, so I just blissfully ignored the problem.

After a couple more days, I started noticing a trend.  Any time I ran the microwave, or any other “high load” electric appliance, I smelled the slight burning smell.  Finally, I decided I’d better take the panel off the converter to check things out. 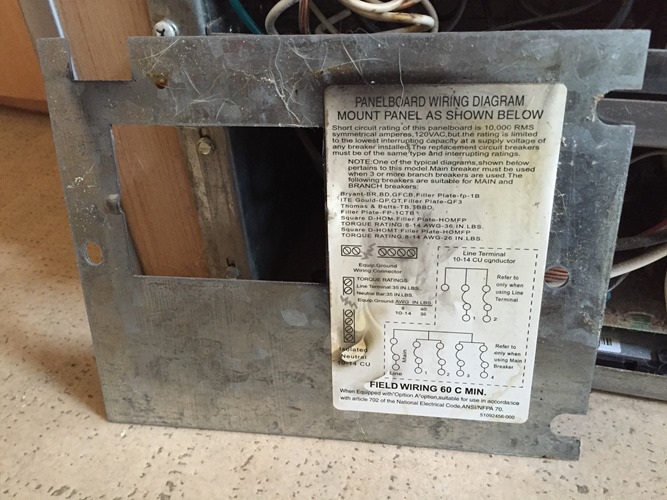 Behind the charred 110 electric access panel, I discovered all the wires connecting to my neutral buss bar had almost totally burned to bits!  It really is sheer luck that I decided to investigate when I did, because 1 day (or maybe even 1 hour) longer, and these wires could have totally started my RV on fire! 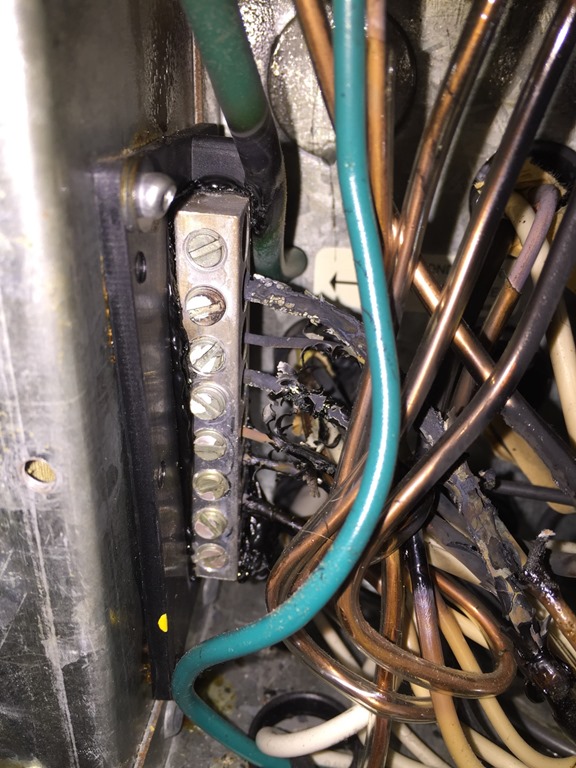 Some helpful guys from the Facebook View/Navion forum got me headed in the right direction to troubleshoot the problem, and the Refuge manager dispatched an electrician to come inspect my outside power pedestal for any mis-wiring.

As it turns out, the pedestal power was perfectly fine.  My 30 amp shore power plug, on the other hand, was not!  It’s neutral prong had melted the plug of my Surge Protector. 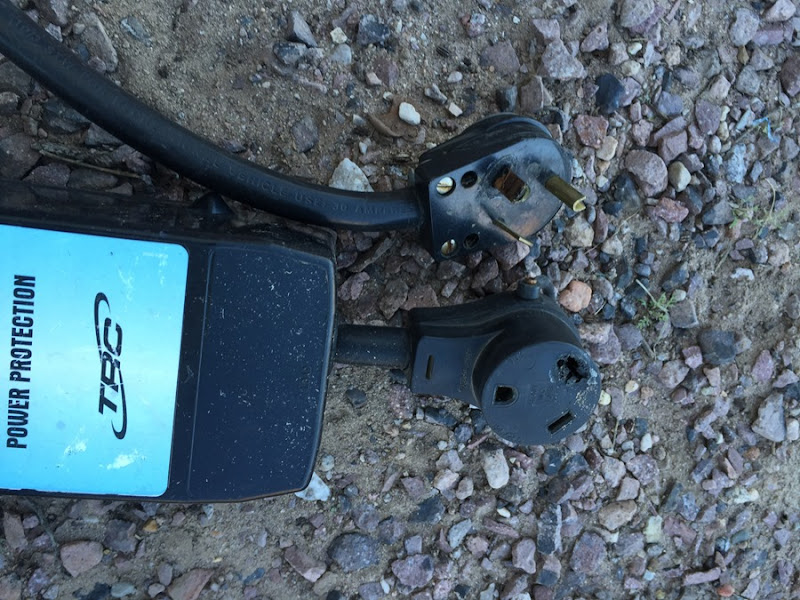 I first disassembled my surge protector to see if any loose wires might have caused the “hot neutral” situation.  Nope, all was fine there.  So, the next step was to disassemble the 30 amp shore power plug.  What a total mess on the inside! 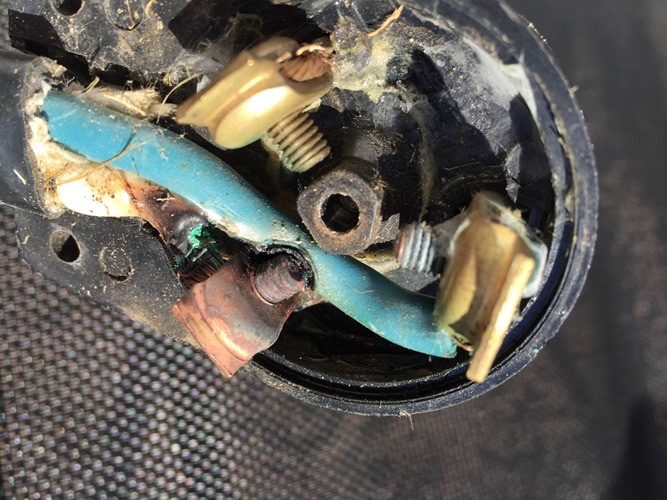 The neutral post had burned itself halfway into the ground wire, and both wires were fused together just below that.  Likely, over time the dumb design of this shore power plug (with screws rubbing against the ground wire) had likely worn away the insulation finally causing the power arc to occur.

Snipping away the charred wires, and a new $5 shore power plug solved that problem.  The new design, smartly, has each screw facing away from the wires! 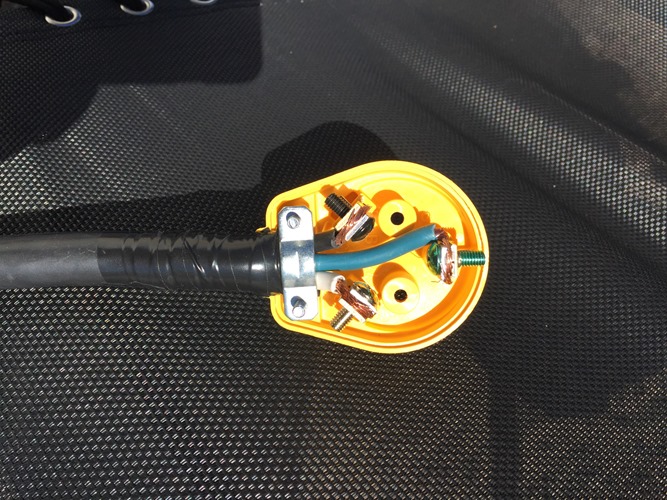 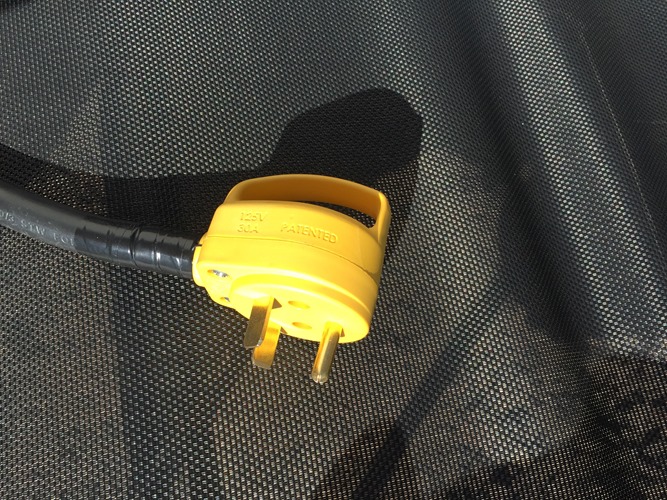 My next dilemma was whether to tackle the replacement and rewiring of my RV converter power center myself, or drive my RV up to Albuquerque to try and get it fixed.  A call to the Winnebago dealer was discouraging—no available service appointments until Thanksgiving week!  Finally, after a bit more research, I felt comfortable enough to start doing the job myself.

Thus far, I’ve successfully transferred my 12-volt converter components and wiring over to the new power center box.  Next step will be to strip down and reconnect the 110 electrical wires and circuit breakers to the new box.  All I need now is enough free time during daylight hours to finish the job (a bit of a challenge this week due to our work schedules!), but until then, I’m doing fine with a few extension cords and power strips to provide me with 110 electric, and thankfully, with a fully-working 12-volt system and my solar panels to recharge batteries, I can take my time finishing this job!

Another major focus for me this month has been to investigate and plan my 2016 strategy for healthcare.  A few weeks ago, BlueCross/BlueShield of Illinois notified me that they were discontinuing their individual ACA PPO plans in 2016 and moving everyone to a restrictive local “EPO” network.  When the ACA exchange opened on November 1st, the available plan options for my Illinois zip code were pretty dreadful.  Only 1 remaining nationwide PPO plan, and that was with the co-op insurer I had started out with this year, Land of Lincoln, who while offering many primary care doctors nationwide in-network, lacked many other critical specialists “in-network” (such as anesthesiologists).  The problem with this is that Land of Lincoln, and now BCBS of Illinois too, have absolutely no caps on out-of-network out-of-pocket costs.  They can tell you a provider or facility is out-of-network, and you are then on the hook for any and all the charges that could result, even if they can offer no in-network alternative!  I was not about to open myself up to that kind of financial (and health) risk if I could help it.

So, I began looking at the other popular full-time RVer states to see what their ACA healthcare plans looked like.  Thankfully, Kyle from RVer Insurance Exchange had just published his excellent summary of 2016 healthcare options for under-65 RVers.  As expected, Texas offered nothing but HMO options (BCBS of Texas is run by the same group that runs BCBS of IL and a few other Blues around the country that all dropped their PPO plans this year).  South Dakota offered nothing new—just the same one insurer who continued to call their limited, local-only plan a “PPO.”

Fortunately, one bright light appears to remain for 2016 ACA healthcare—Florida Blue.  While it calls its plans “EPO’s” they still come with access to the nationwide “Blue Card PPO” system and these visits are still considered in-network!  Even better, my premium costs in Florida will be nearly $200 cheaper per month than Illinois, and of course, becoming a Florida resident means I’ll no longer have to pay state income taxes—super bonus!

So, I have now officially begun the process of moving my domicile from Illinois to Florida.  This will take a number of weeks (and surely require many more hoops to jump through along the way), but if all goes well, I hope to be a Floridian by January 1st.

Of course, the 2017 ACA healthcare landscape could totally change, and there’s no guarantee that Florida Blue will continue to offer it’s nationwide PPO after 2016, but so far, the overall cost savings is still worth the hassle of “moving.”  Fingers crossed!!!

Now, to end on some happier notes—my new job on the Refuge!  Instead of working the Visitor Center full-time as I anticipated, the Refuge volunteer coordinator asked if I’d like to work with the senior naturalist instead.  You bet I would!!!

So, my new job is to drive a 15-passenger van on refuge tours each weekend and assist the senior naturalist, Cathie, with spotting birds and wildlife along the way.  Additionally, she and I will soon split duties of manning the big viewing deck at sunrise and sunset to answer questions for visitors watching the cranes and geese fly in and fly out.

So far, the new gig has been a blast!  We often stop and bring the spotting scope out when there’s an interesting bird for visitors to look at. 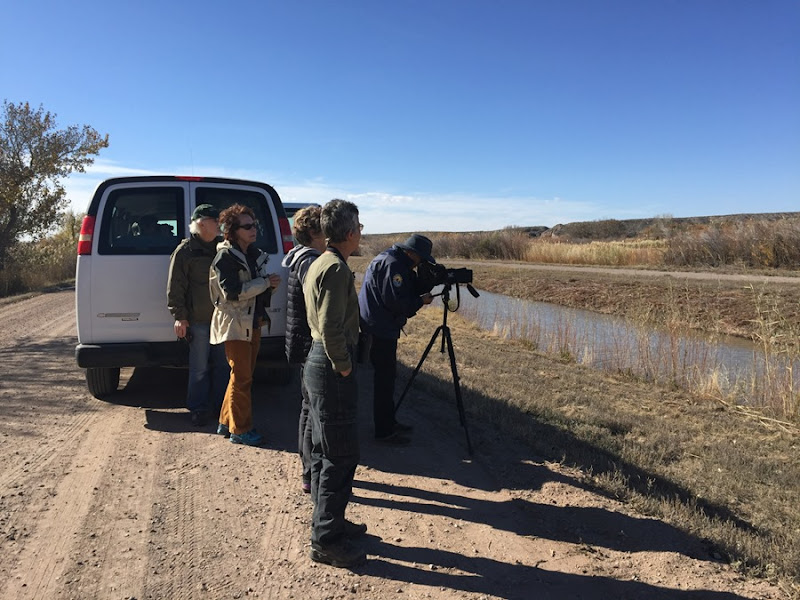 Cathie is an incredible wealth of knowledge, and I’m learning a lot from listening to her as we drive. 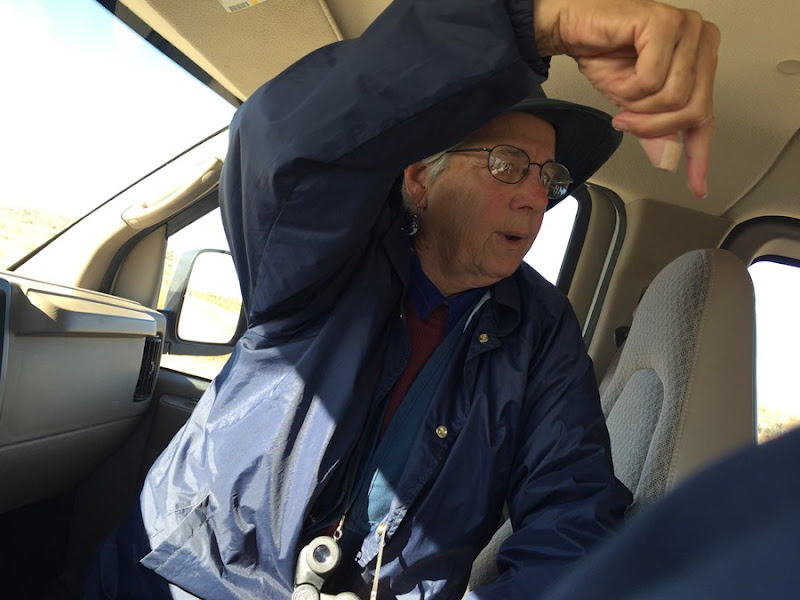 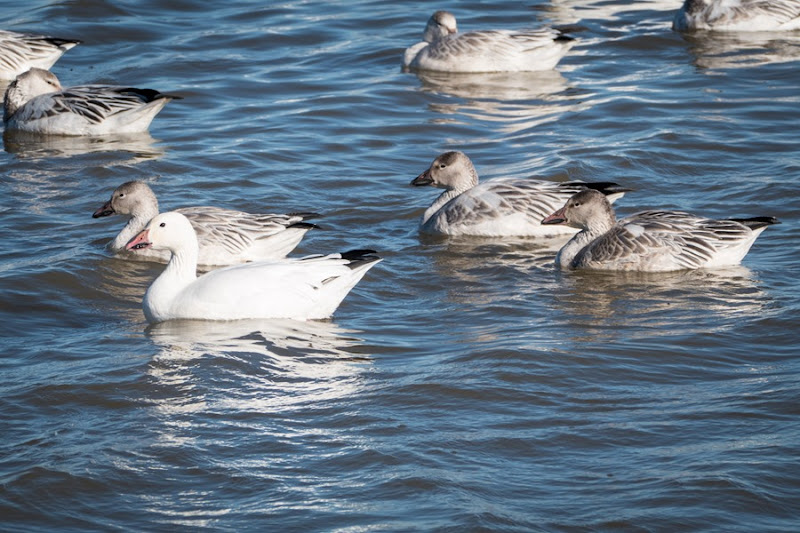 this pair of Goldfinches (an American on the left, and a Lesser on the right)… 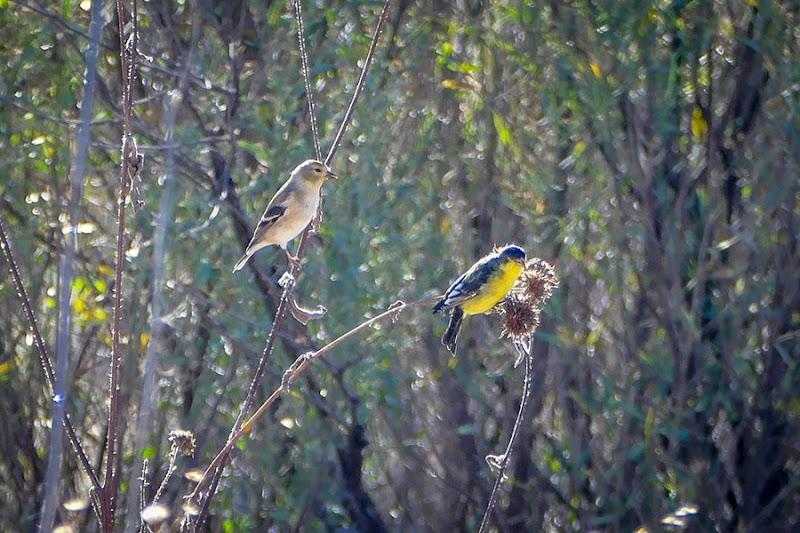 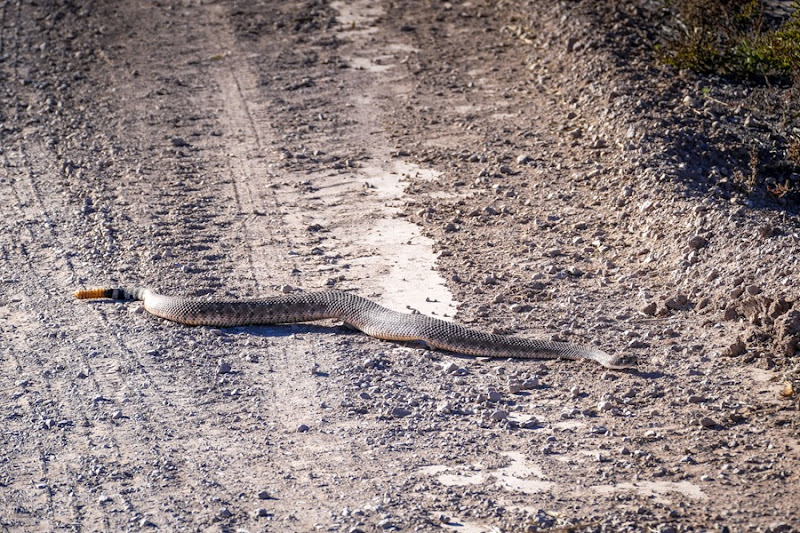 our favorite female American Kestrel (who poses at this spot on nearly every tour)!…. 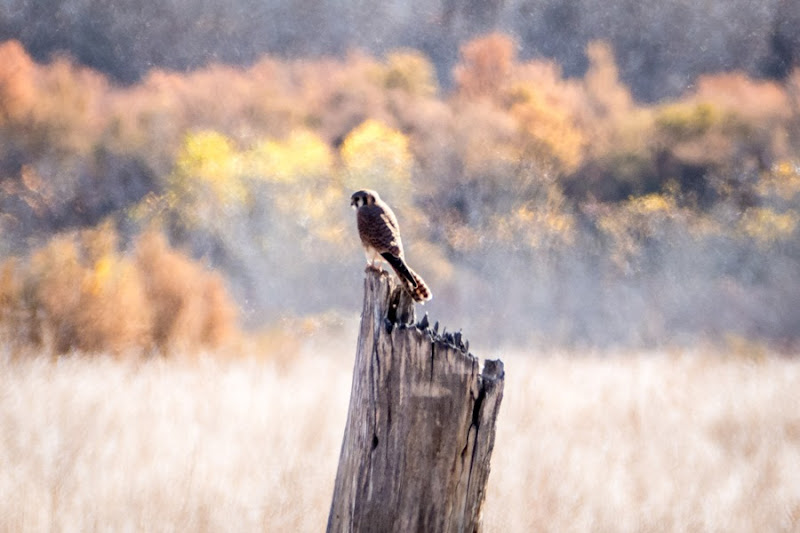 a great close-up look of a Wilson’s Snipe… 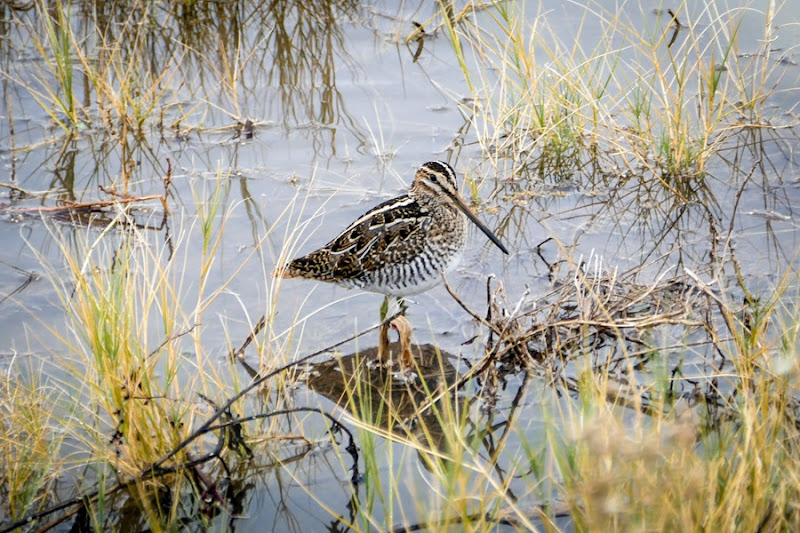 our first sighting of the season of a Hooded Merganser… 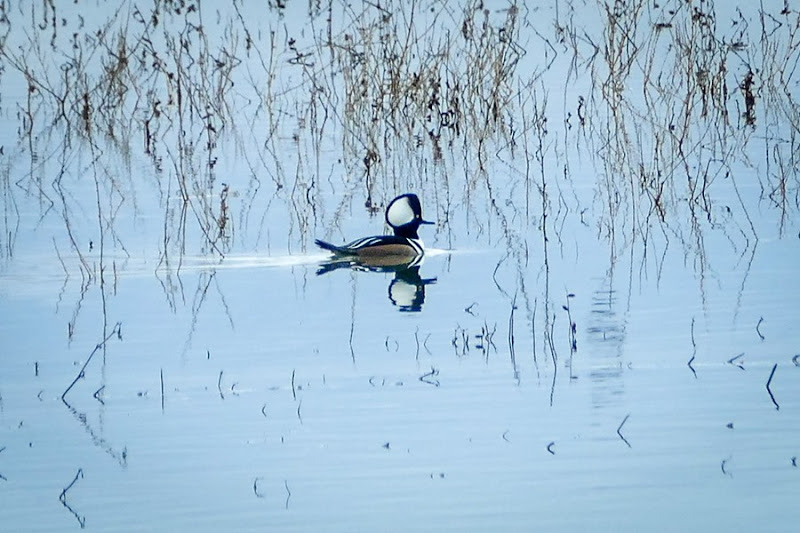 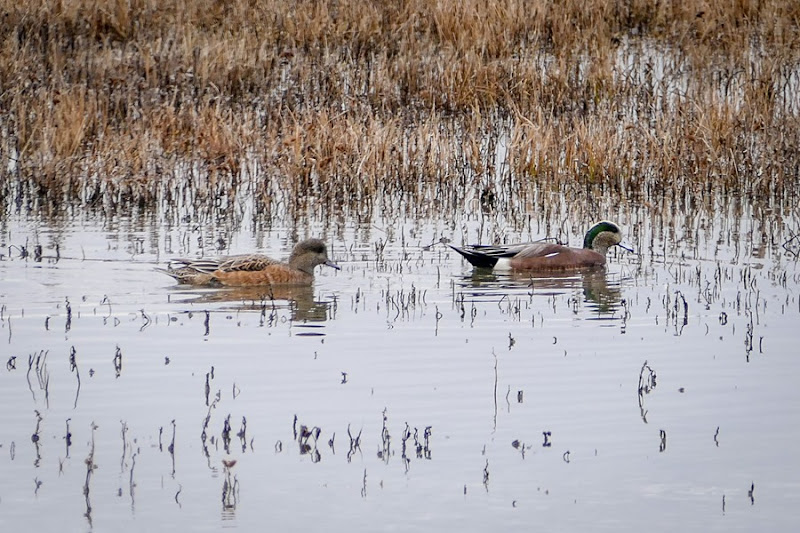 of course, lots and lots of our most-popular bird, the Greater Sandhill Crane…. 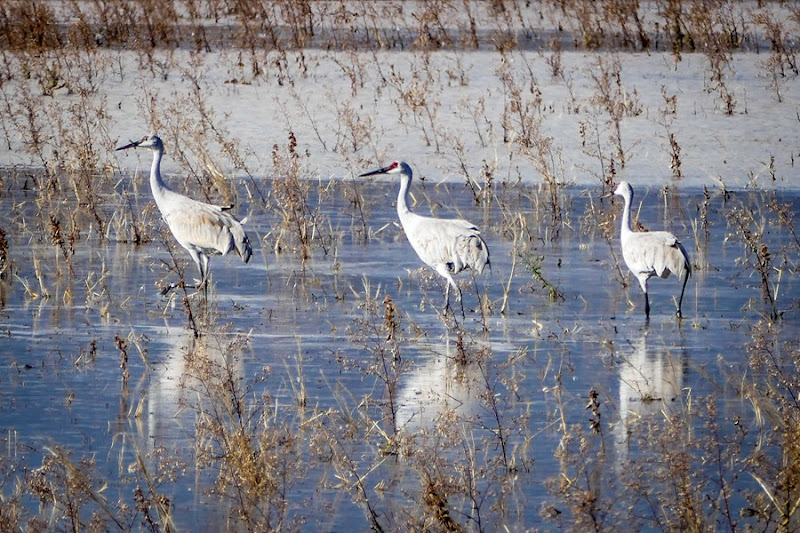 and today, the first sighting ever on the Refuge of a rare Leucistic American Coot!  Even though this one swam with dozens of normal looking black coots, they seemed to shun this poor, odd, virtually un-colored bird. 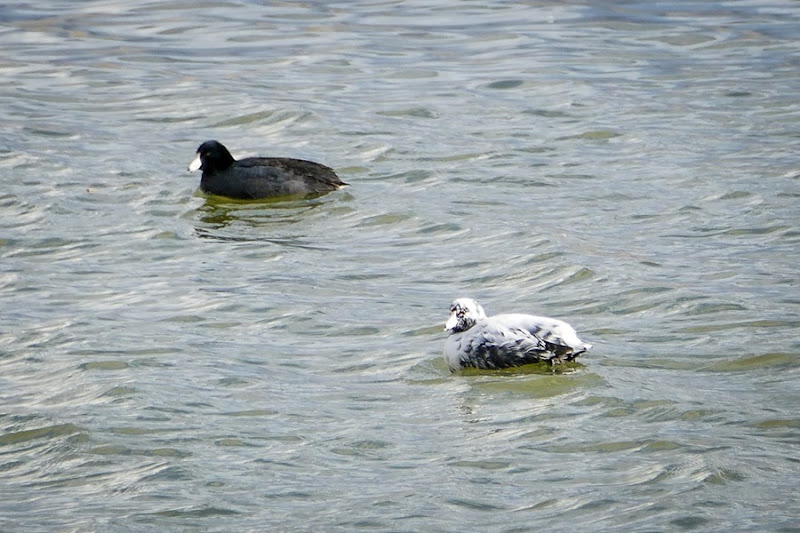 Never a dull moment on the Refuge!