My first winter in the Colorado Rockies turned out to be rather mild with minimal snow in the valley.  Great for a non-skier like me; not so great for my brother and family who make their living in the ski industry and love to ski.

One weekend, I headed down to Denver to check out the Rocky Mountain Arsenal National Wildlife Refuge to see if I could spot some bison in front of the Denver skyline.  Yep!  They were there...and one even posed nicely for me! 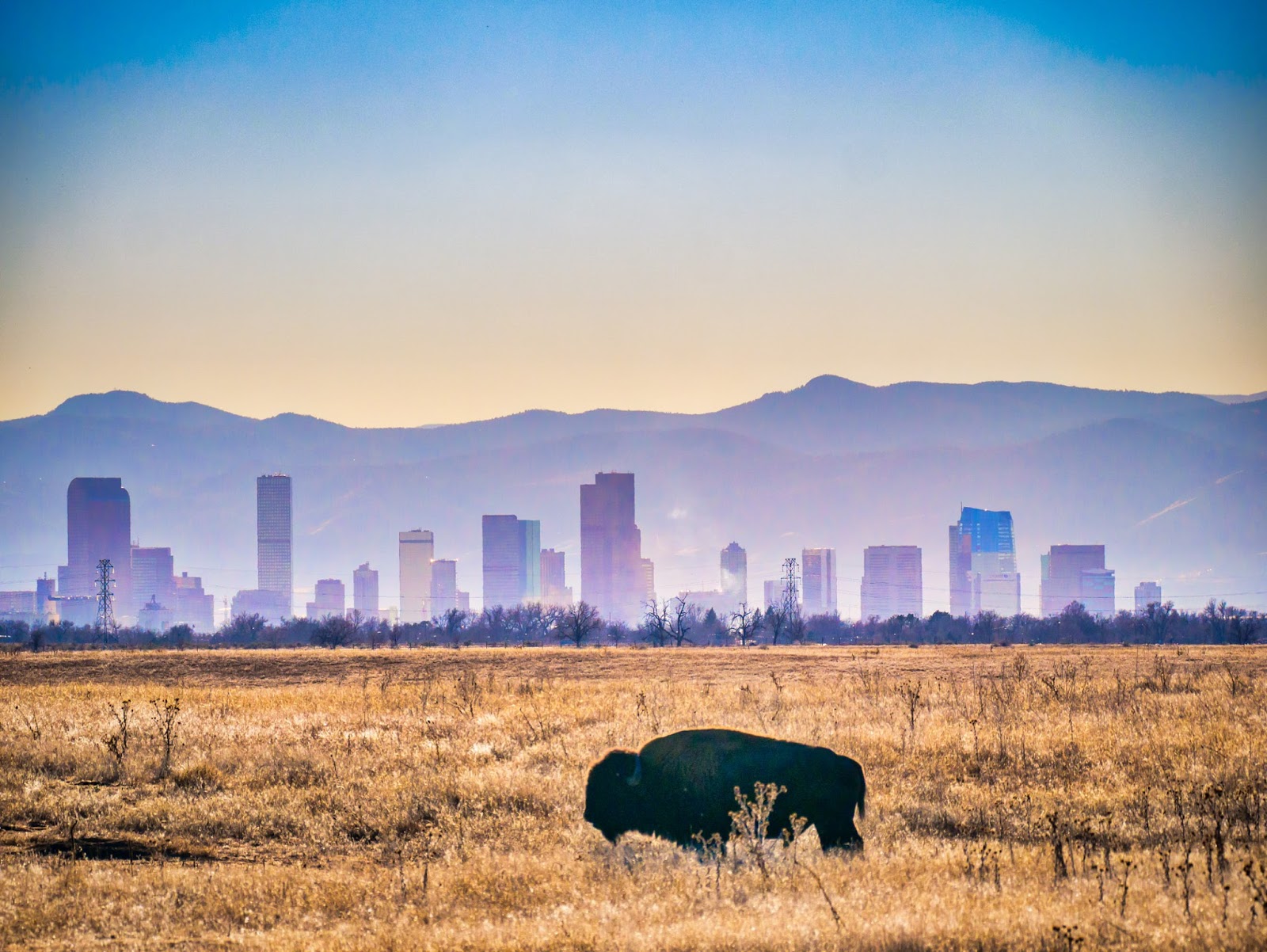 But, I really wished I could do some ski photography.   There was no way I could get up on the skiing runs at Vail with my back back and lack of mobility (so no way to photograph my brother in action), but the upcoming Birds of Prey Men's Downhill World Cup Race at Beaver Creek looked promising.

The ski race offered fantastic ADA accessibility-- a snowcat transported me the last 500 feet up the ski hill, and a nice handicap viewing platform sat directly behind the finish line (even closer than the VIP's got!). 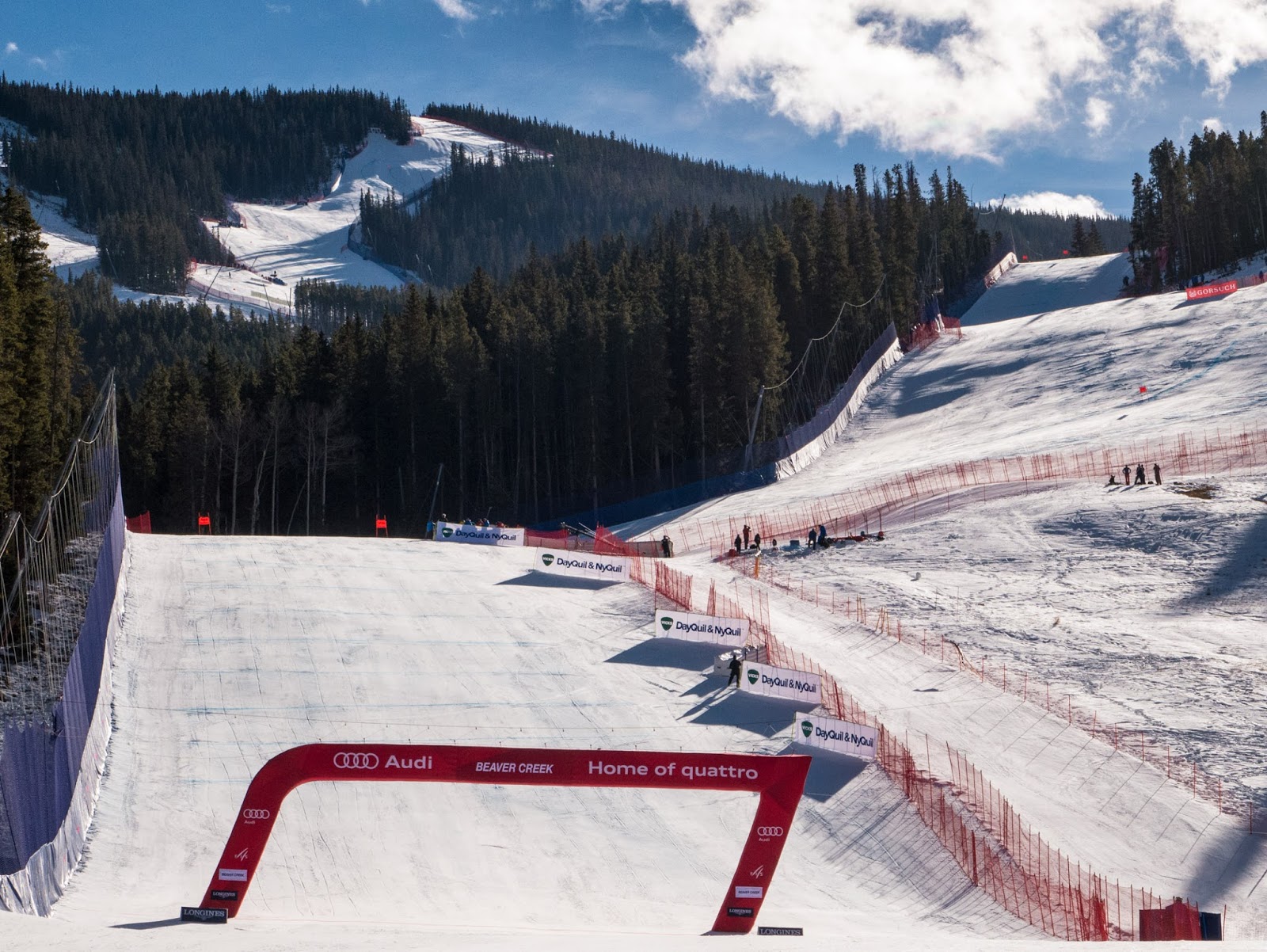 The course is so tall, it was impossible to see the starting gate except via the video monitors.  But once the racers came down over the final few turns, it was quite fun to see them whiz over the last hill at speeds exceeding 60 mph! 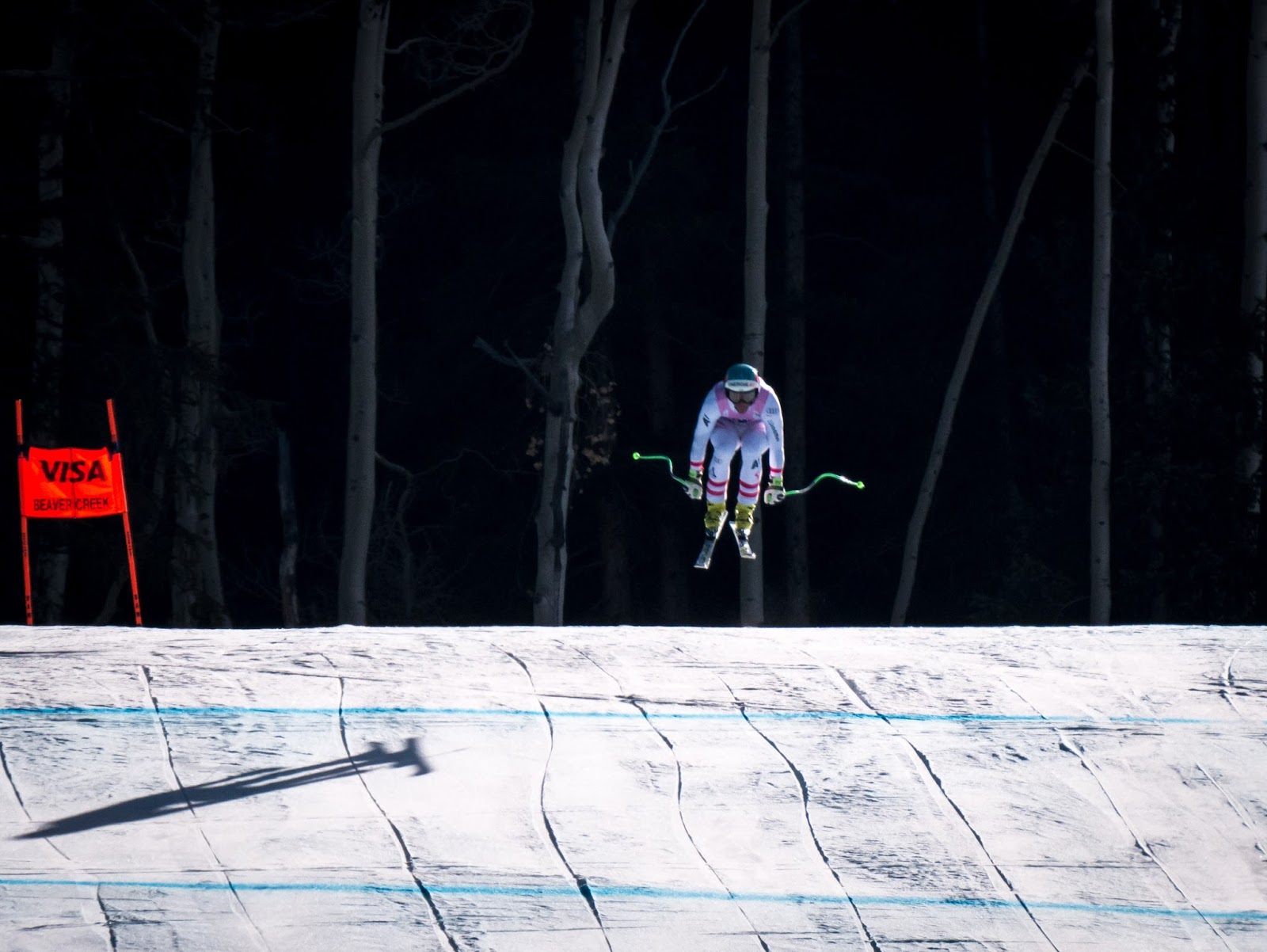 The Norwegian skier Axsel Svindal won the event-- and since he also happened to take gold at the 2018 Winter Olympics Men's Downhill in South Korea, it turned out to be a preview of the Olympics too! 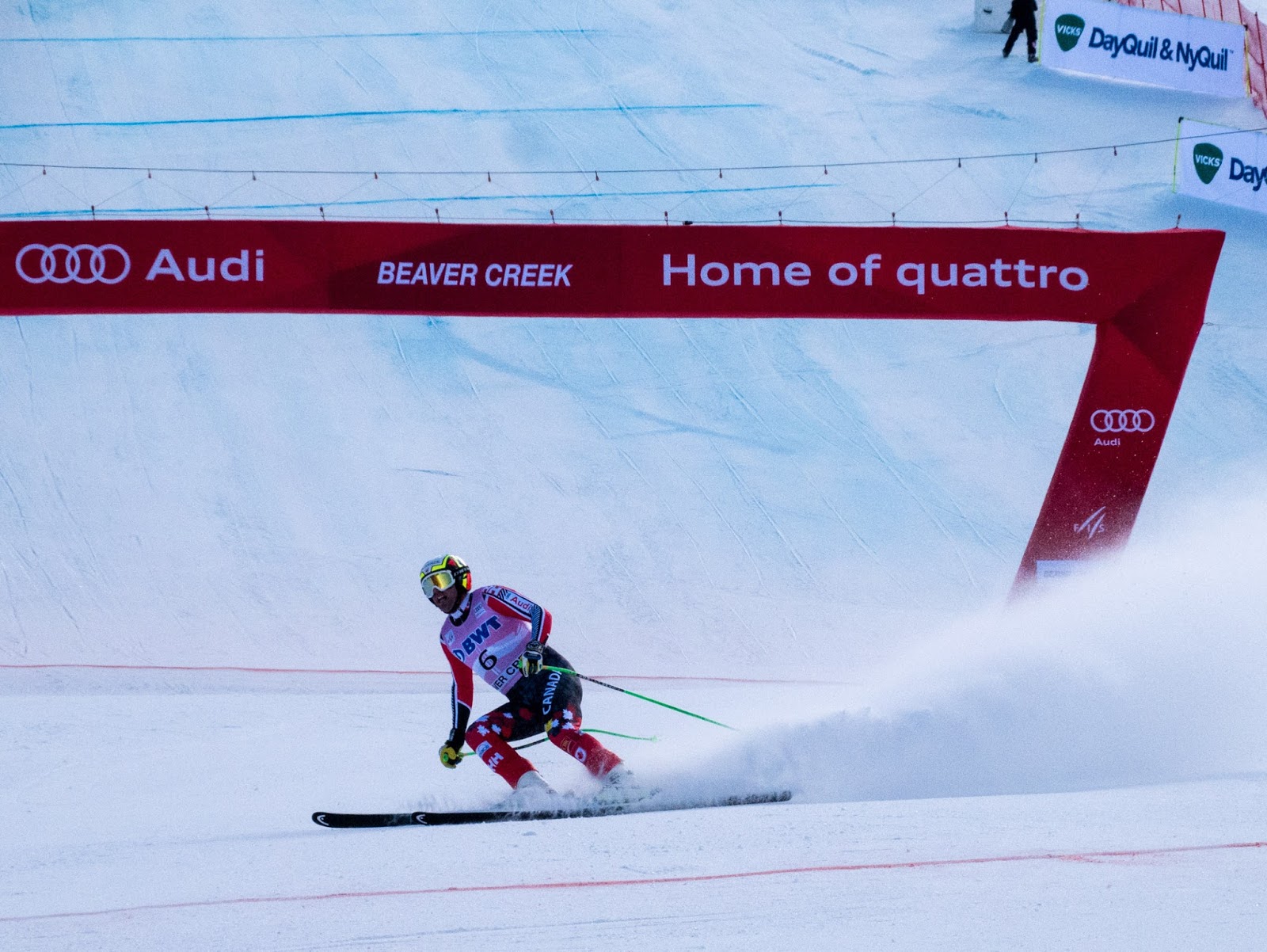 But other than a few fun events like this, by late January, the stressful winter season began to take its toll on the family.  My brother runs a busy ski shop in Vail and works extremely long hours in the winter.  Meanwhile, his wife blew out both of her knees on her 2nd day of skiing (due to the minimal poor snow conditions on the mountain) and required multiple knee surgeries.  Add on top of that, trying to deal with my terminal illness and figure out how on earth to make their 2-story house with lots of stairs more comfortable for me and accessible for hospice, and we'd finally reached a breaking point.  Something had to give.

As much as my brother and I wanted to stay together, we'd have to find a better solution for the near-term.  While Vail is a popular tourist destination, it's still a rural community with minimal services (especially hospice), and frankly, I was beginning to get rather lonely not having anyone other than my brother, his family, and a few Denver friends to interact with for most of the past 8 months.

After talking to my family in Chicago, it became clear that the best place for me right now would be back where I likely should have planned to end up all along... my long-time "sweet home, Chicago."

My stepsisters immediately offered up their houses to care for me, and a growing cadre of Chicago friends also jumped in with further support.   So, on a cold (but blizzard-free) week in mid-February, I packed up the little yellow Tracker to make one final 1,000-mile drive across the Great Plains.

But not before heading out to the storage yard to say goodbye to Winnie!  Gosh, what amazing times we had in the past few years traveling thru the U.S. and Mexico!  Yes, I did cry as I watched her disappear in the rear view mirror that last time, but the good news is that she'll be staying in the family.... 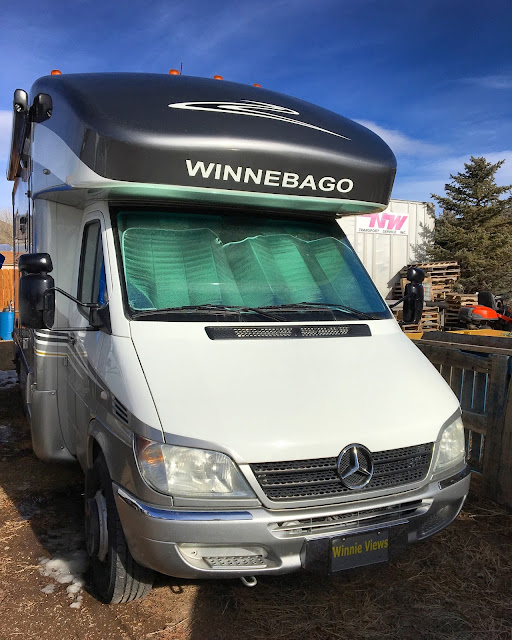 My brother has decided that he'd rather keep Winnie than have me sell her.  So if you see this sweet rig heading down the highway next summer, that will be my brother behind the driver's seat.  Give him a wave!

I decided to take the long drive slowly and spread it out across 4 days.  That was a wise call as my stamina had indeed declined (even since my December trip to New Mexico).

I spent my first night in Brush, CO and woke up to a bit of snow and frost as I made my way to the McDonald's for breakfast. 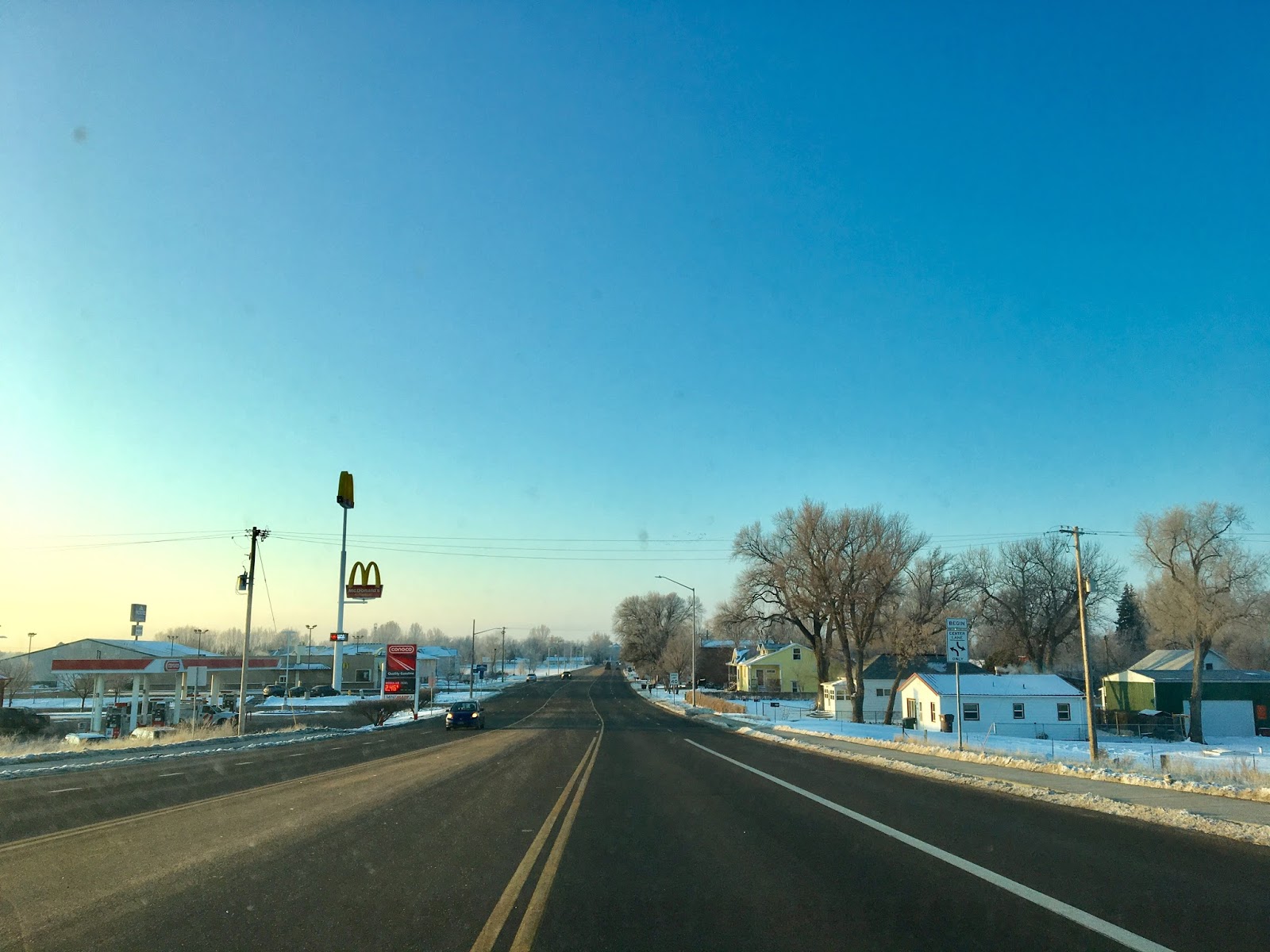 I then enjoyed the fine sites of Lincoln, NE and Iowa City, IA for my subsequent nights' stays.   But I could not drive all the way through Iowa without stopping for lunch to visit with my dear old T@B camping buddies Judi and Kathy, who converged onto I-80 to meet up with me in Davenport. 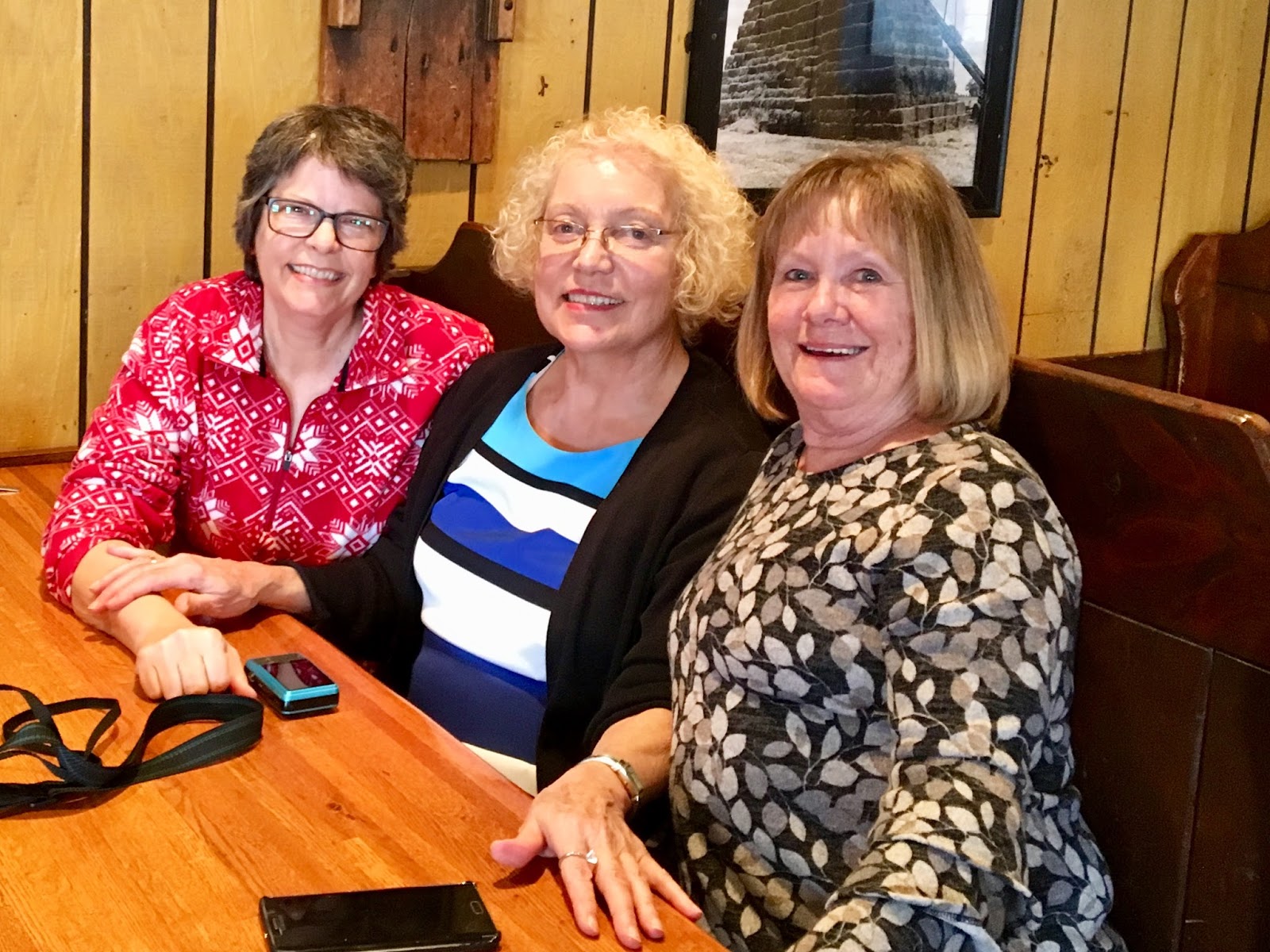 We had a delightful time catching up-- remembering all the fun summer rallies we had attended with our tiny T@B teardrop campers.  One particularly miserable week, it had been near 100 everyday with humidity well above 90%.  But, thanks to T@Bs having oversized air conditioners (and us having plenty of wine!), we managed to still have a hilarious and very memorable week together!

I rolled into my sister Holley's driveway just before nightfall on February 15th.  She and her husband, Mike, got me quickly settled in and well-fed.

The next week, I established care with my mom's old oncologist, who promptly ordered up a series of new CT scans.  My plan had been to look for a condo to rent that would be nearby both sisters' houses so that they could visit frequently but not feel they had to care for me.  It'd also be a place where a 24/7 caregiver and my brother could stay when I got closer to the end.

But after assessing the scans (and my rapidly escalating pain levels), my oncologist suggested that the condo idea might now be a bit too late, and that I should just stay with family instead.

Thankfully, Mike and Holley have preferred this arrangement-- they'd rather just walk downstairs to see me every day than drive a few miles.  So, I'm now staying with them for the duration, and it's actually been a pretty wonderful experience for everyone thus far.

I started hospice 3 weeks ago, and have a very comfortable hospital bed set up in their 1st floor den (with a newly-remodeled adjacent bathroom no less!).  My hospice nurse is super-experienced, and an absolute delight to work with.  Within just a couple of days, she managed to migrate me to a set of drugs that have almost totally eliminated my pain without making me groggy, and this alone has probably added a few more weeks to my life!  Right now, I'm still able to drive and meet up with friends for lunches and dinners a few times a week-- still feeling somewhat "normal" even though my time is now down to a couple of months or less.

Both sisters and Mike are very involved with the Roselle United Methodist church here and have been helping me tremendously in my spiritual growth.  While I would sometimes attend church in the past whenever I visited, I made it a goal during Lent to attend every service I physically could (and I accomplished it!).  It helps that the pastor here is also phenomenal-- her words each week have been connecting with me in a very powerful and profound way.

When I first faced the task of moving 1,000 miles during this late stage of my life, I was filled with trepidation.  Would I even survive the trip?

But now that I've made it back here to Chicago, I can't imagine completing my life without getting to reconnect with all of my family and friends here.  The deeply moving conversations and spiritual awakenings during these past few weeks have been the most meaningful of my entire life.  I can't imagine not being able to experience what I am experiencing right now.

I'll try to explain this all a bit further in my next post.  I've never wanted this blog to turn into a cancer journal, but I do hope there is value in hearing what it feels like from an emotional/spiritual sense to prepare for the final realm of life....spoiler alert:  it's not all pain and sadness as you might expect, but a time of some pretty downright amazing revelations too!


Posted by Lynne (WinnieViews) at 1:01:00 AM
Email ThisBlogThis!Share to TwitterShare to FacebookShare to Pinterest
Labels: Colorado, Illinois, Iowa