Deep in the Heart of West Texas 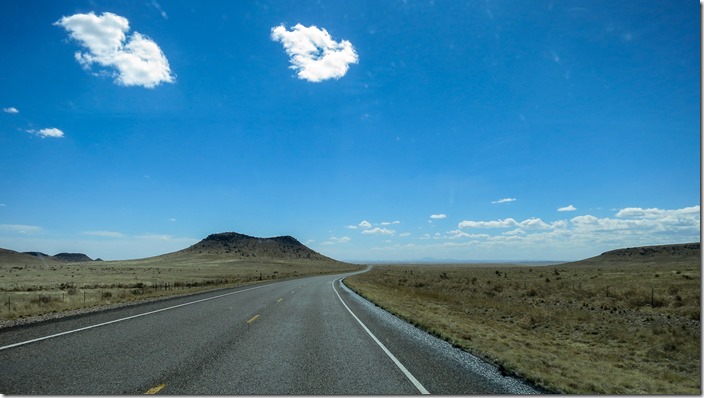 I drove up to Balmorhea State Park to rejoin Suzanne for a few days since she had the supreme foresight (that only a native Texan could have!) to grab a lone extra campsite for me that had just become available online a few weeks previously.  All of the State Parks and many of the private campgrounds were completely booked up for Spring Break week, so while Balmorhea might not have typically been my first choice of a travel destination, I was happy to have a real campsite for the rest of the week, and even happier when the ranger assigned me to the site right next to Suzanne.   Views and Trackers just look better together, don’t cha think? 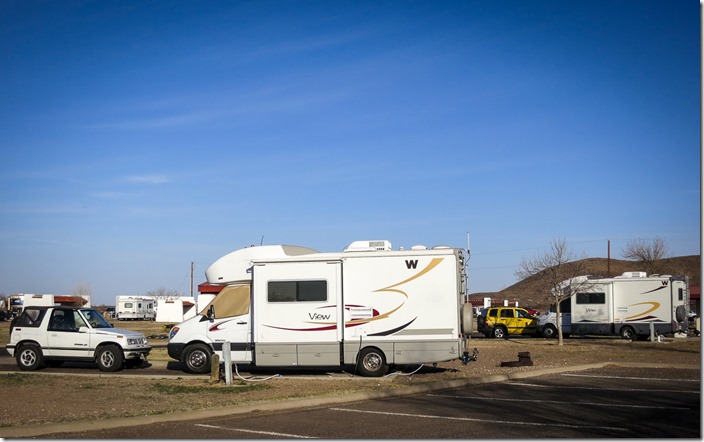 Balmorhea (pronounced Bal-mor-RAY) is a thimble-sized state park in the vast ocean of dry and dusty West Texas prairie.  It has no hiking trails, no bike paths, no kayaking, and not much of anything else to do except camp and swim.  Balmorhea’s “one trick pony” is it’s enormous natural spring-fed swimming pool with depths ranging from 3 feet to more than 25 feet, and a constant year-round temperature of around 75 degrees.  Suzanne raved about her daily dips, so I couldn’t wait to give it a try when I got there.

Now 75 degrees surely feels refreshing on a hot 100+ degree summer day, but today’s wind-whipped Spring day when the air temp struggled to get above 80, this water felt pretty darn COLD!  But, I was still bound and determined to give it a go!  It seemed that the warmer water would likely be on the shallow end of the pool since the sun was out to warm it up further, so I made my way over to the kiddie pool stairs and slowly immersed myself.

I tried to like the pool as much as Suzanne… I really did!  And, once in the water, the temperature was really not that bad.  But two things just creeped…me… out – the slime-covered semi-concrete/semi-rock floor of the pool, and the hundreds of little minnows swimming all around me!  I was looking for a nice warm “sit and soak”, but this pool was not going to be THAT!  I endured for another 10 or 15 minutes, and finally concluded that I liked looking at this pool a lot more that being in it! 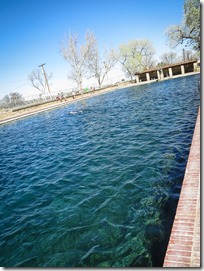 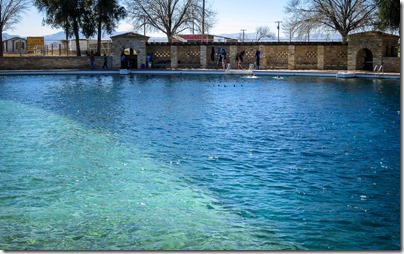 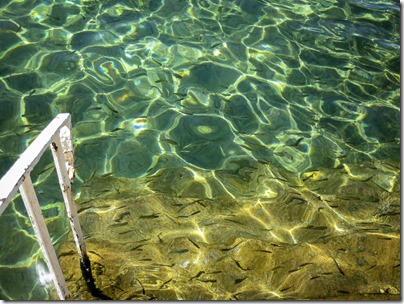 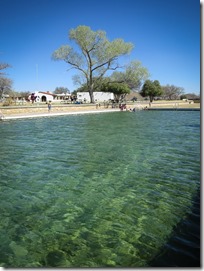 Bored and looking for something to do the next day, I decided to pay a visit to Pecos, Texas about 45 minutes north of Balmorhea.  Pecos (pronounced “PAY-cohs”) was much more of the West Texas I was expecting. 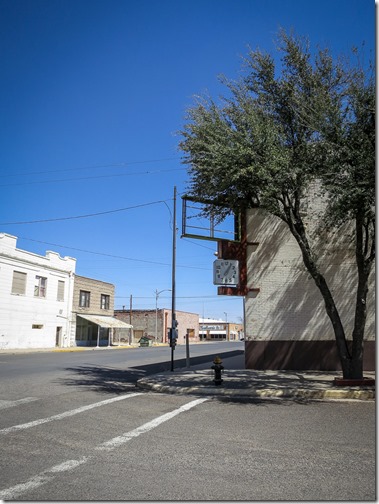 Nothing was moving at it’s old closed up drug store either. 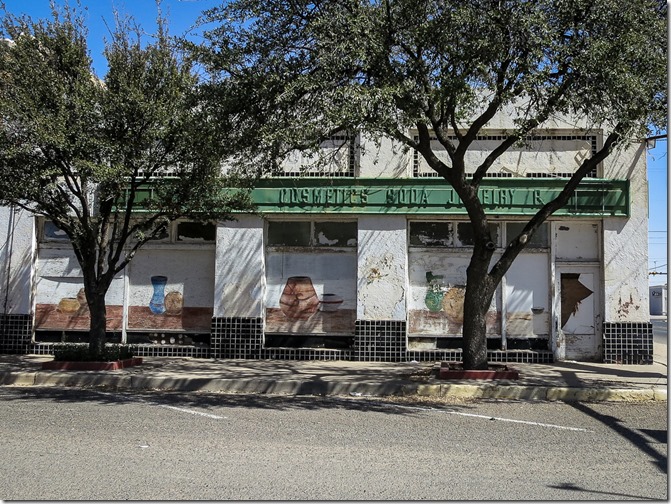 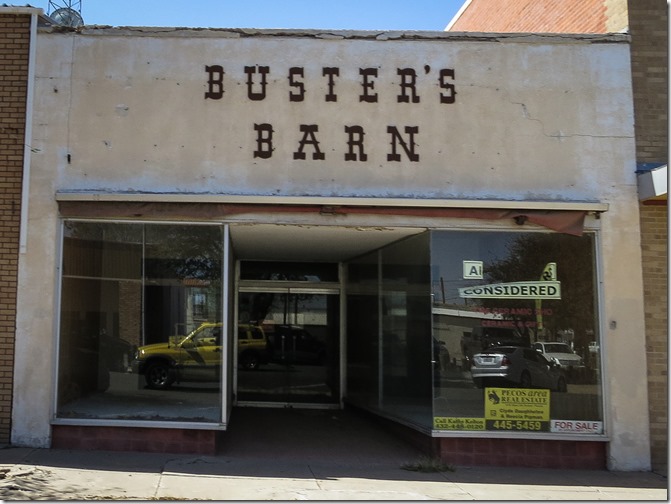 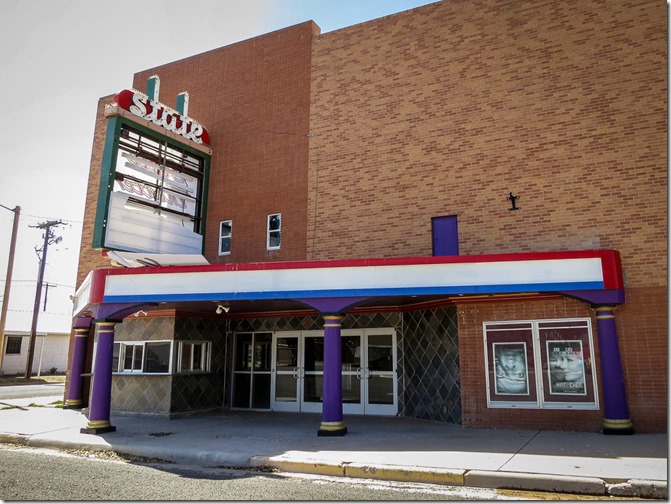 No cowboy had called this home for quite a while, but credit the owner for still trying to rent the place anyway! 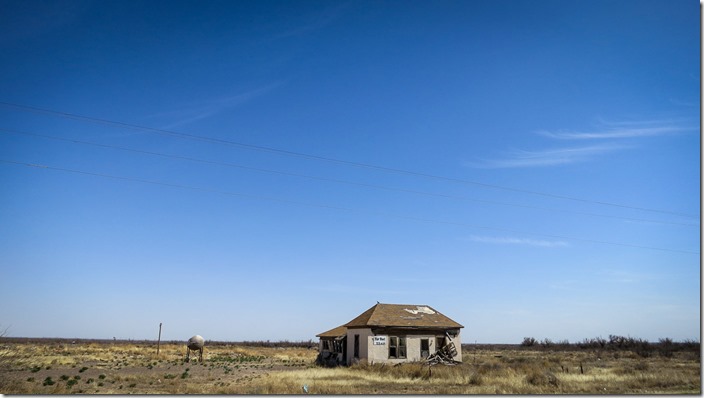 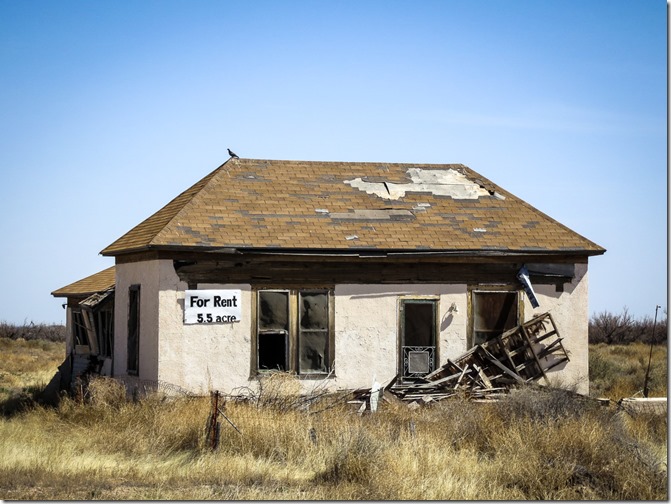 Surely, Pecos must at least have a grocery store.  After all, they have plenty of hotels and restaurants clustered around their exit on I-20.  But, nope, not this one… 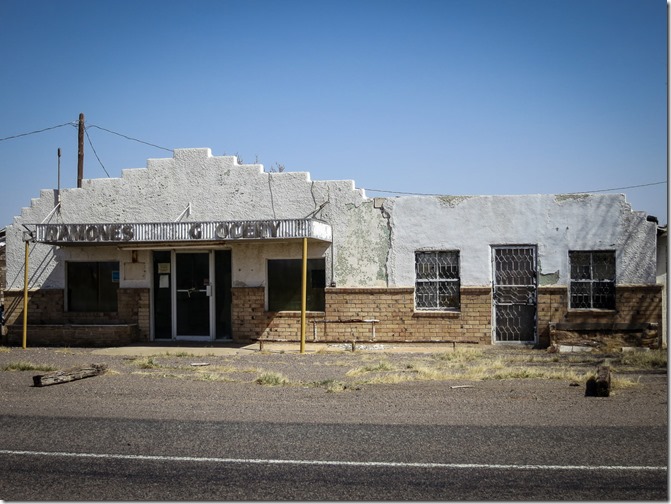 They hav a thriving cowboy church though! 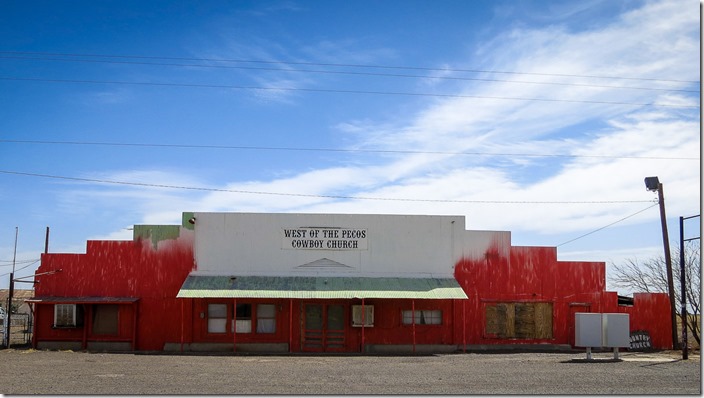 And what do cowboys like to eat more than anything else in the whole wide world?  Bar-B-Que!

Despite the lack of a full-service grocery store in town, Pecos has a world-class BBQ joint called Pody’s, which was ranked one of the Top 50 BBQ places in the World last year by Texas Monthly magazine.

My friend Suzanne (raised on a small cattle ranch in central Texas) is always ready for a little meat-eating, and since it had been nearly a year since I last ate meat, I figured I could take a momentary vegan time-out and partake in this special occasion food too.

Pody’s is only open from 11:00 to 2:30pm, so I arrived at 1:15 to get some early dinners to-go to bring back to our camp.  But, apparently, Pody’s is EXTREMELY popular during Spring Break Week in Texas, as this was the sign on the door when I arrived: 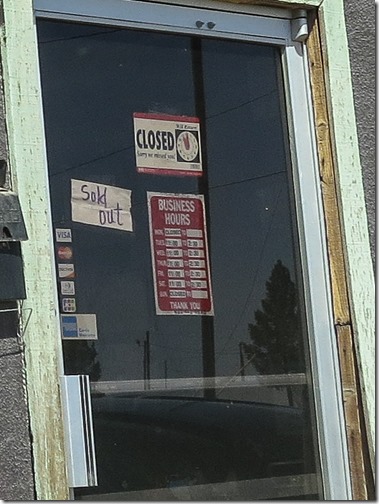 The door was open, so I walked in anyway to double check, and yes, the sad truth was confirmed—Pody’s had run out of world-class BBQ after only being open for 2 hours that day!

So, 2 days later, I made one more 90-mile round-trip trek up to Pecos to get there earlier.  This time, I was finally successful and scored two Brisket and Rib dinners to-go. 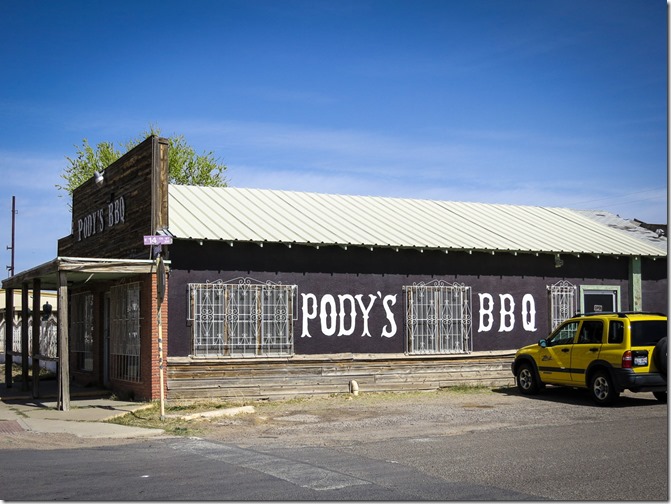 The line was already long as two ladies worked feverishly to dish out the good stuff. 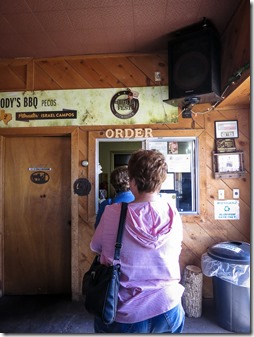 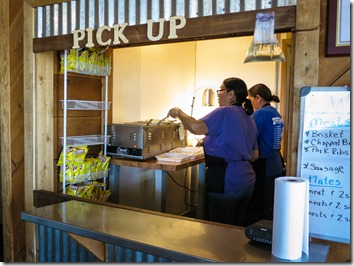 I was soon heading back home in the most incredible-smelling Chevy Tracker!  Yes, this vegan-on-pause rang that bell!  Pody’s was the best BBQ I’d ever eaten, and one of the best Suzanne had ever had as well! 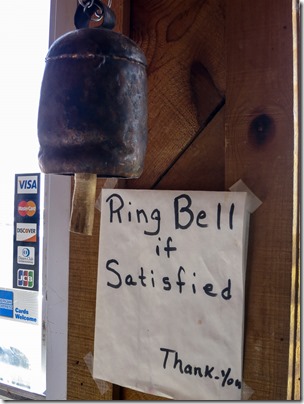 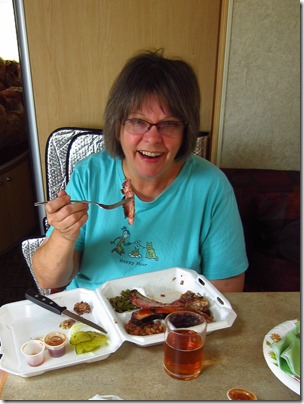 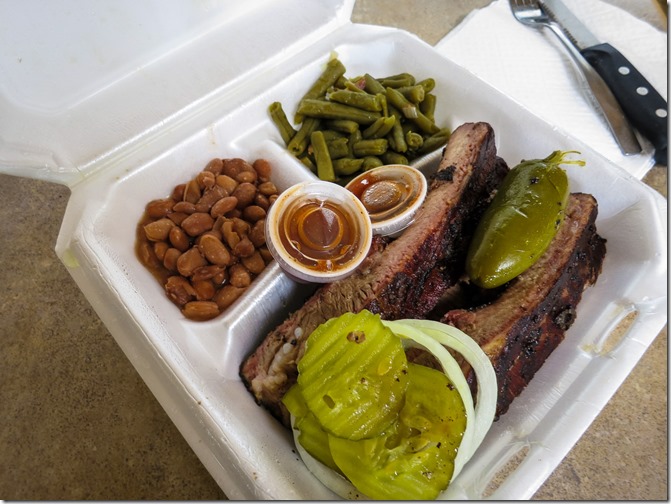 On our final night at Balmorhea, the West Texas winds had finally died down enough for Suzanne, Millie, and I to enjoy a campfire cookout.  Suzanne had a big load of firewood and mesquite charcoal that she wanted to get rid of, so I brought my lone veggie burger over to get grilled up next to her week’s worth for BBQ chicken that she was cooking up in anticipation of our following week’s visit to Big Bend National Park.

The moon was rising and nearly full by the time dinner was ready. 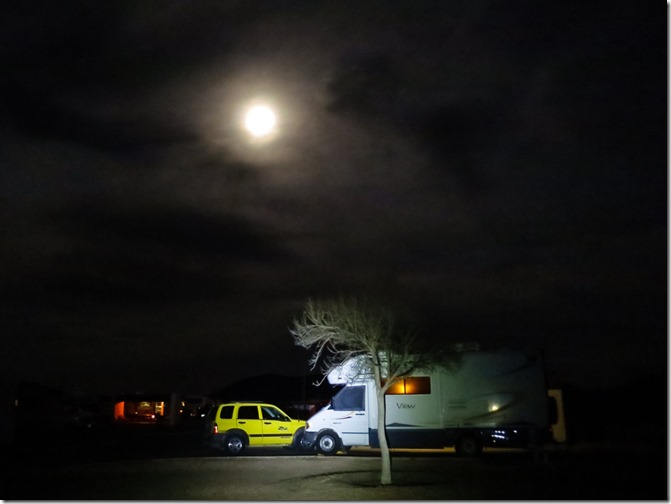 But Suzanne just donned her camping headlamp to finish up the grilling. 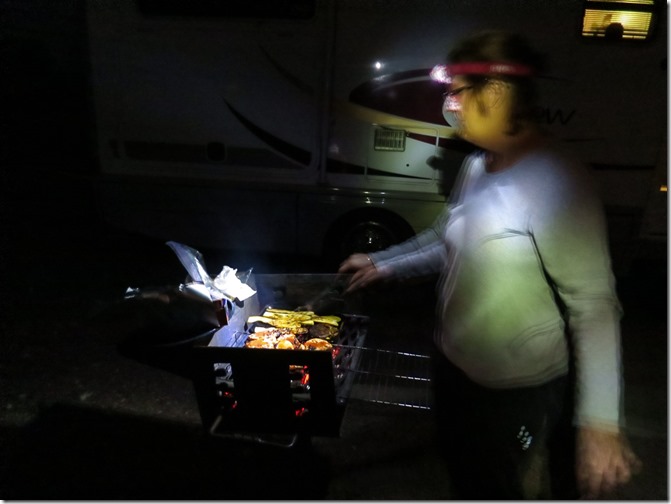 The warm campfire felt great and we enjoyed taking a few photos of the Winnies beneath the moon glow and canopy of stars overhead.  Yes, indeed, the stars at night are big and bright deep in the heart of Texas! 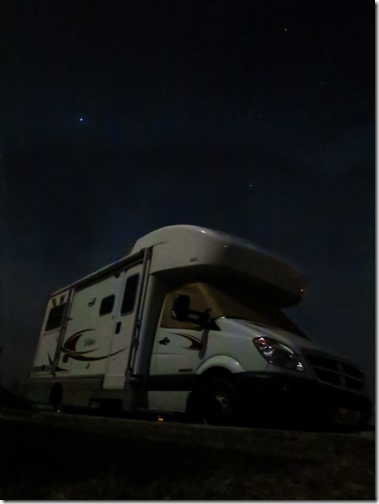 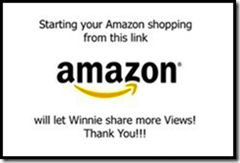 Posted by Unknown at 8:39:00 AM
Email ThisBlogThis!Share to TwitterShare to FacebookShare to Pinterest
Labels: Texas