After my hectic first week back in Illinois in early May (which culminated in a insurance fiasco that postponed my cancer surgery until June), I now had 3 extra weeks on my hands.  While I still had plenty of “Pre-Op” errands to-do and lots of local friends to visit, I decided that I first and foremost needed a few days of alone time to be still, fully process my new reality of living with cancer, and to get my internal batteries fully charged and ready for the battles ahead.

Every time I return to the Midwest from a winter spent in the desert southwest, I desperately crave what the desert lacks—water, and the color green!  A few years ago, the Springtime Ozarks of southern Missouri recharged and refreshed me.  But with time so short this year, I had to look for a nearby retreat.  Starved Rock State Park, just 100 miles southwest of Chicago on the Illinois river, would do the trick! 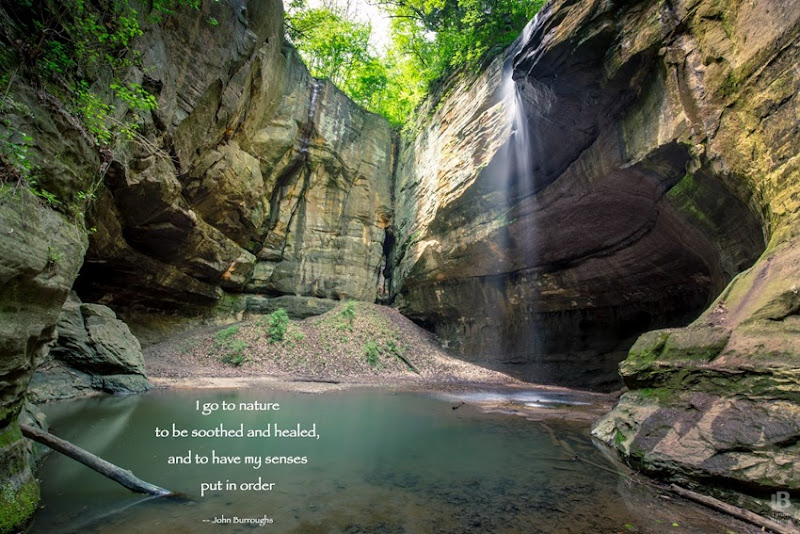 Canyon hikes, waterfalls, lush green forests, and this quote by noted naturalist John Burroughs were sure to inspire:

I go to nature to be soothed and healed,

and to have my senses put in order.

Weekends are usually booked solid at this most-scenic state park in our mostly un-scenic state.  But during the week, the campground was wide open.  I picked one of the primo sites in the woods, literally surrounded 360-degrees by a comforting blanket of vivid green.  Oh how I needed this!!! 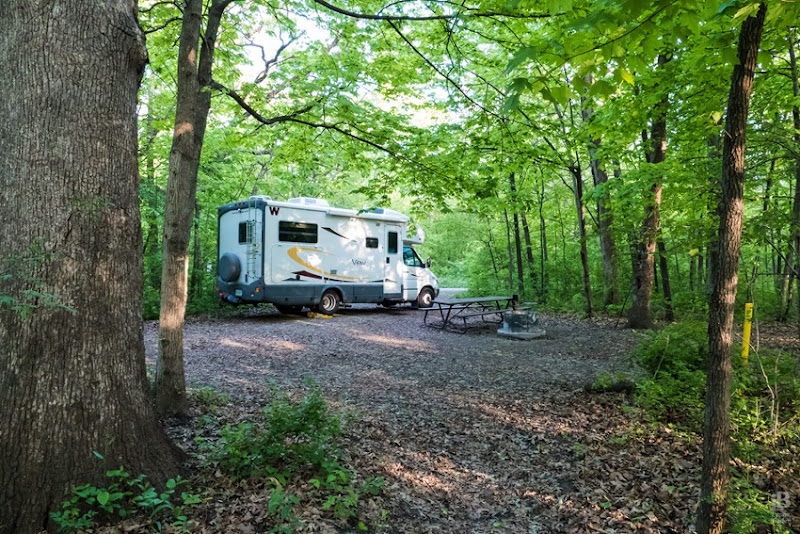 I could lay in bed looking out my rear window-- 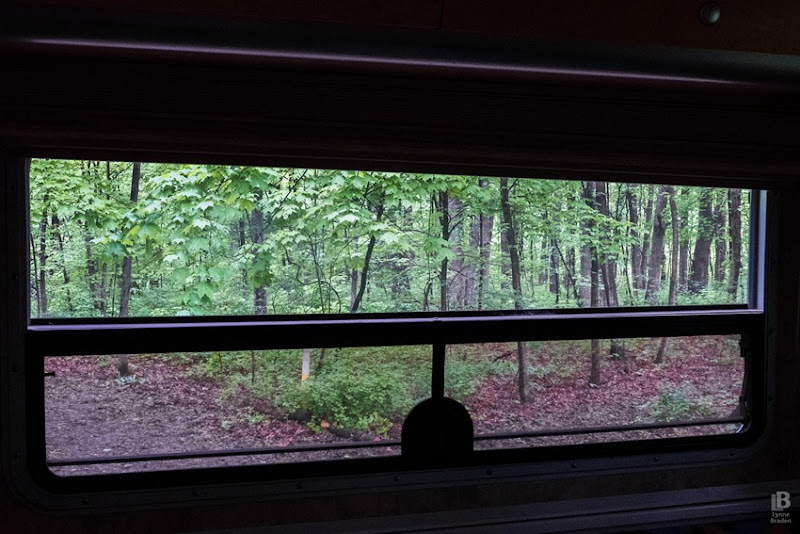 Admire the view from the front recliner seats-- 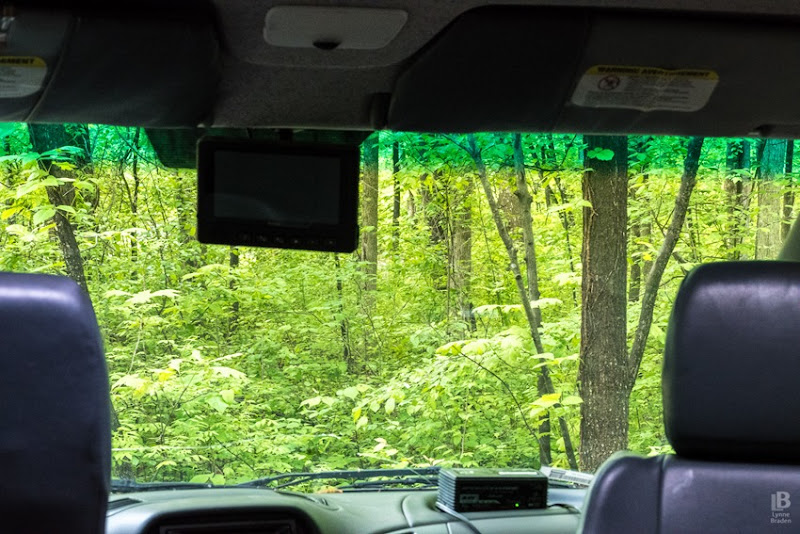 or look up at the tree canopy through the skylight-- 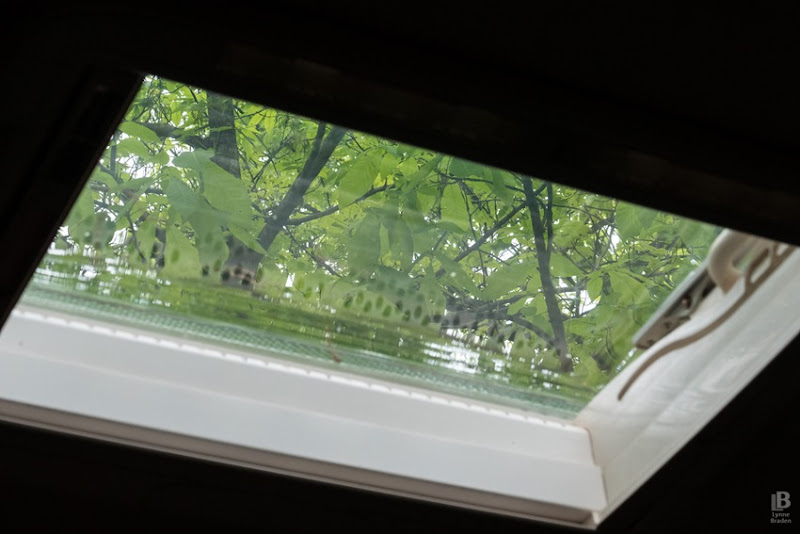 Or simply fling the door wide open to enjoy being embraced by nature.  No cars, no people, no urban chaos.  Just the quiet rustle of a soft breeze through the trees. 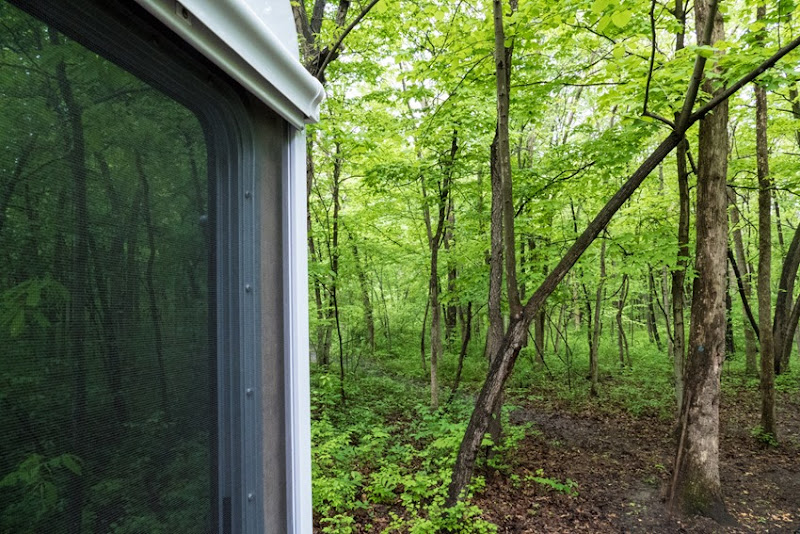 After a full day of doing nothing but resting and admiring this view, I took an evening hike to see my first waterfall at St. Louis Canyon.  I had the trail all to myself, and was nearly moved to tears to see this gorgeous canyon at the end of it! 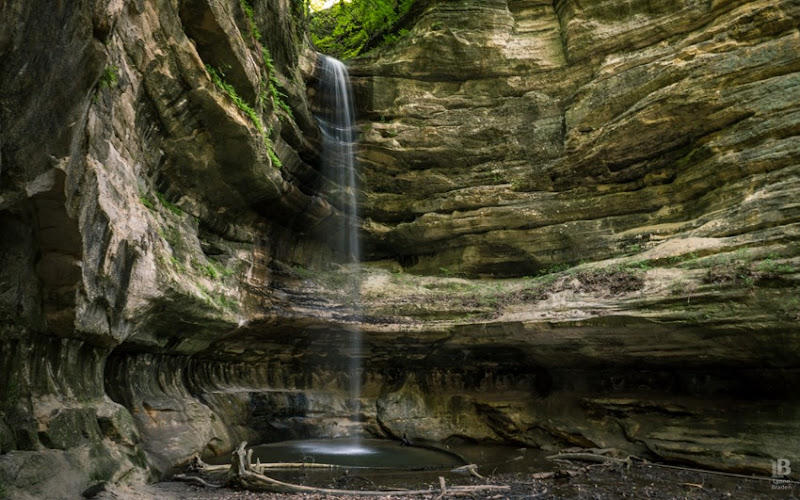 The Spring rains had provided just enough water for all of the Starved Rock canyon waterfalls to flow.  I stayed awhile just drinking it all in! 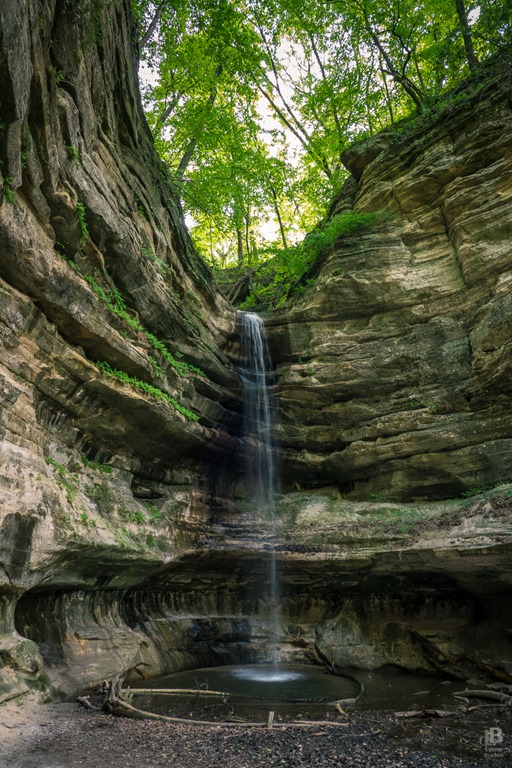 About 10 minutes later, I heard another hiker approaching.  Time to take one final panorama shot and let them enjoy the solitude of this lovely place for themself. 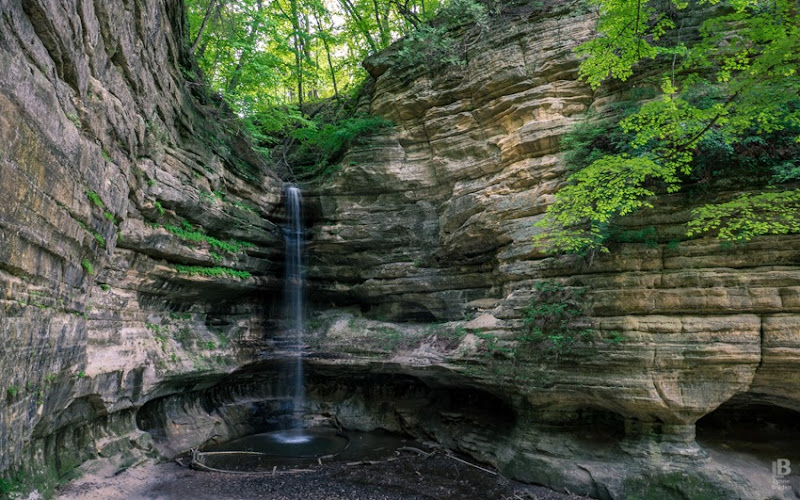 The next day, I packed a lunch and headed down to a more ambitious day-long hike along the Illinois river to get to 2 of Starved Rock’s best canyons—La Salle and Tonti.

A few hundred stairs lead you down to the river level ,where a dirt trail connects all the various separate trails leading to Starved Rock’s dozen canyons.  There were more people out on this morning, but thankfully, not as many visitors as this park usually gets every weekend!

As I turned to walk down into La Salle canyon, no one followed me. 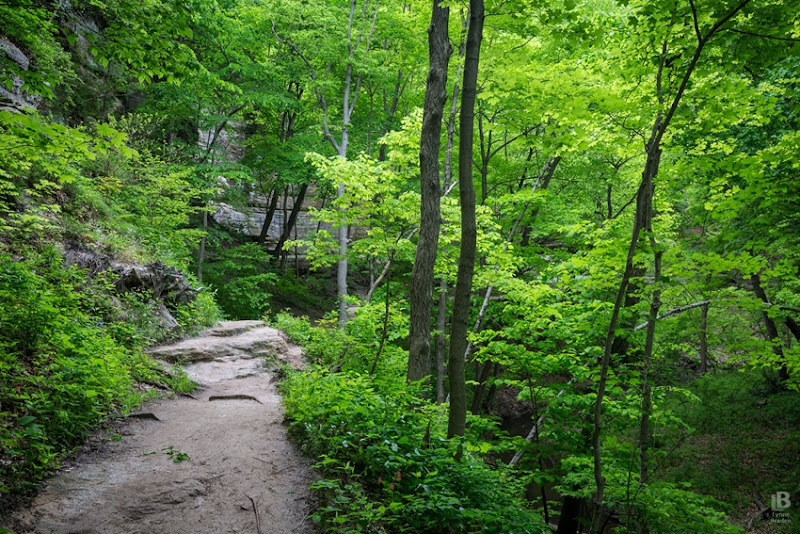 When I got closer to the waterfalls, a small bridge appeared and the path was illuminated by the glow of the canyon’s limestone walls.  John Muir would have loved this place! 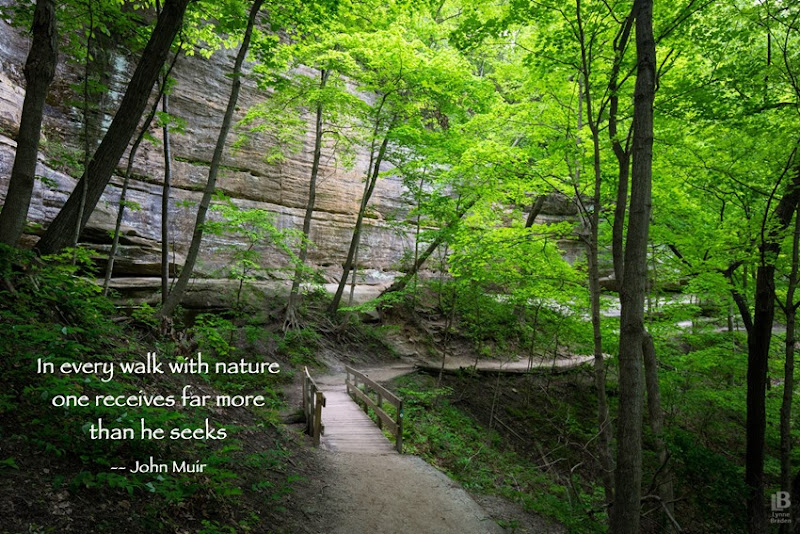 As I arrived to the waterfalls at La Salle canyon, there were a few other hikers already there, but once I had my tripod and camera set up, it wasn’t long before I had the canyon to myself.  I made the most of this “people-free scene” by photographing it as quickly as I could! 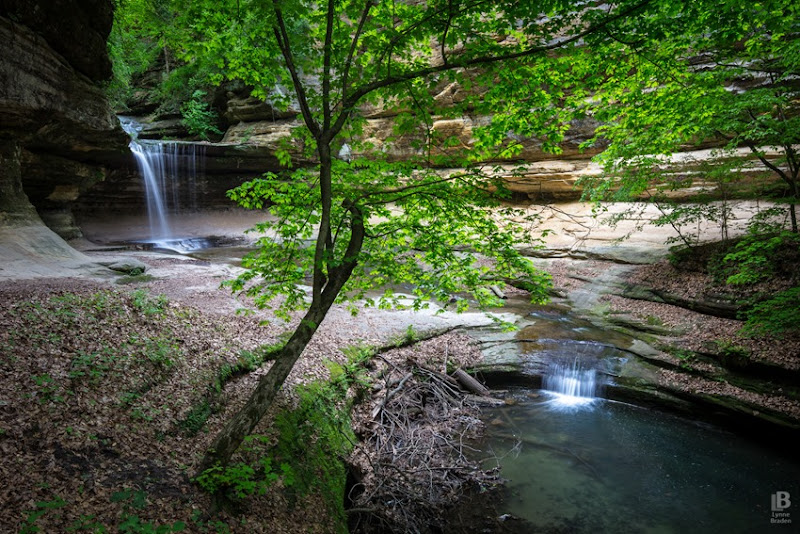 Not only does La Salle have one of the strongest flowing waterfalls, it’s also one you can actually walk behind!  This fall is quite spectacular in Winter when it freezes (but I’m still not inclined to spend another winter in Illinois just to photograph it!). 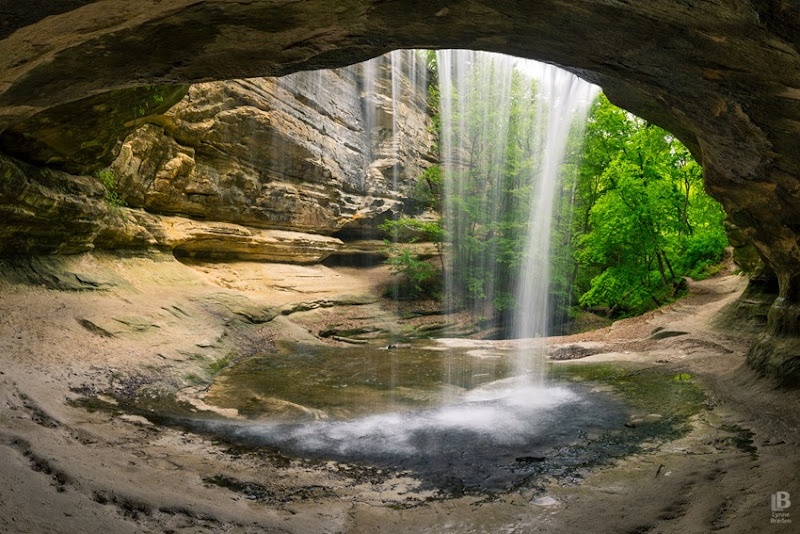 Around the other side of the falls-- 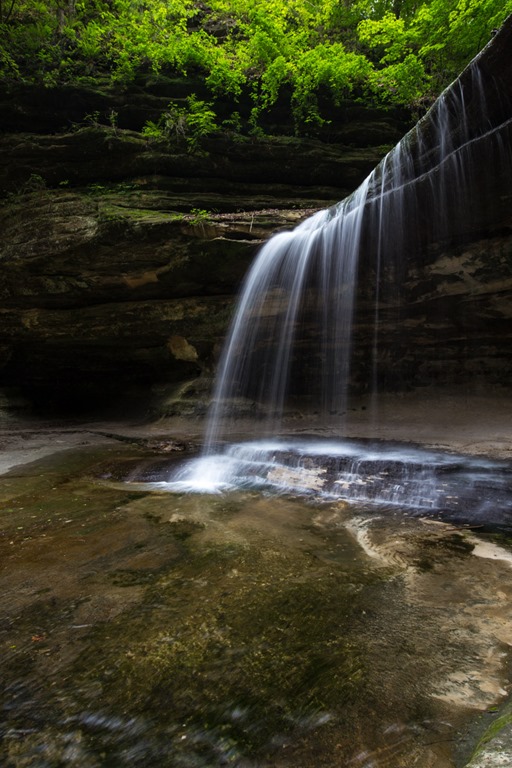 the trail begins to climb out of La Salle canyon.  One last look! 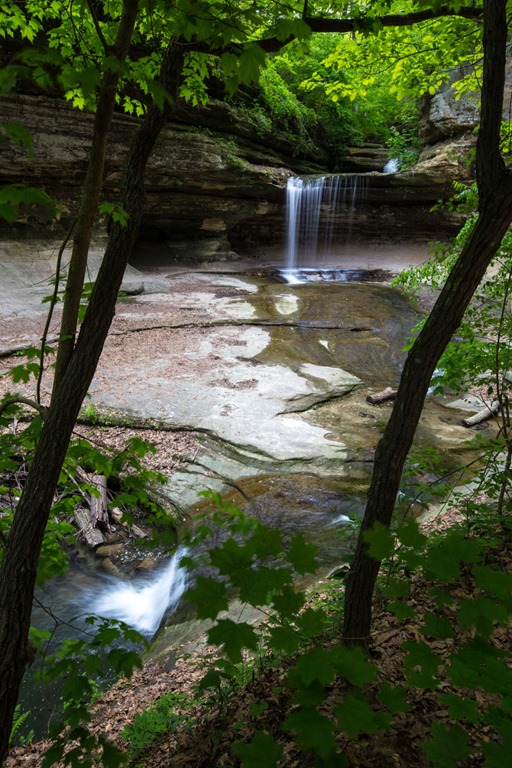 I continued along the trail to the lesser-visited Tonti canyon.  One of the main bridges to Tonti was out, leaving only one, somewhat muddy and wet trail to get there.  But I persevered in order to get this rare “twin waterfall” shot! 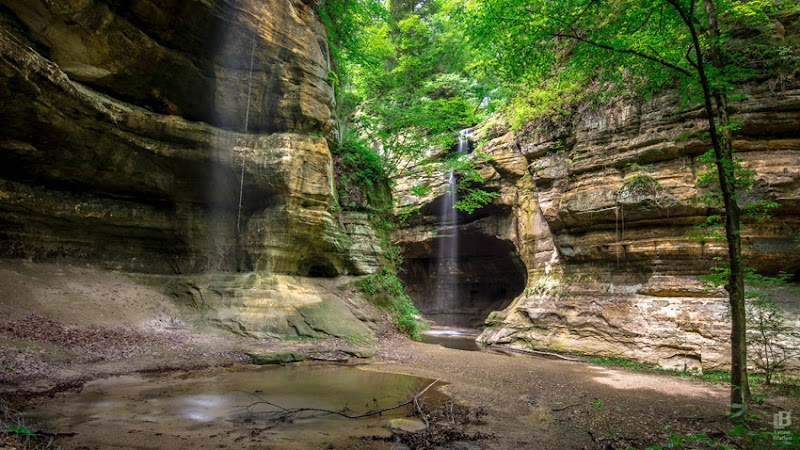 What a magical place!  As the sun started to poke through the clouds, I sat and ate my lunch in front of Tonti’s main waterfall.  Hard to believe a place like this actually exists in Illinois! As I returned back down the trail I came in, things had dramatically changed at La Salle after lunch.  Screaming kids on the path, and barking dogs swimming in the pools.  YIKES! 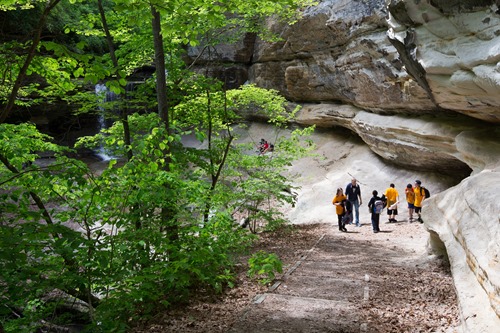 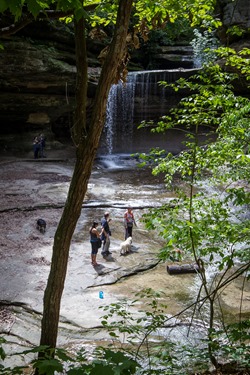 Incredibly, I also watched one “twenty-something” young man carving initials into the soft canyon walls as his sweetheart looked on.  I was so tempted to take photos and bust them, but decided to let young love prevail and move on.  “G & M,” I sure hope your romance lasts as long as it will take poor Mother Nature to erase the graffiti! 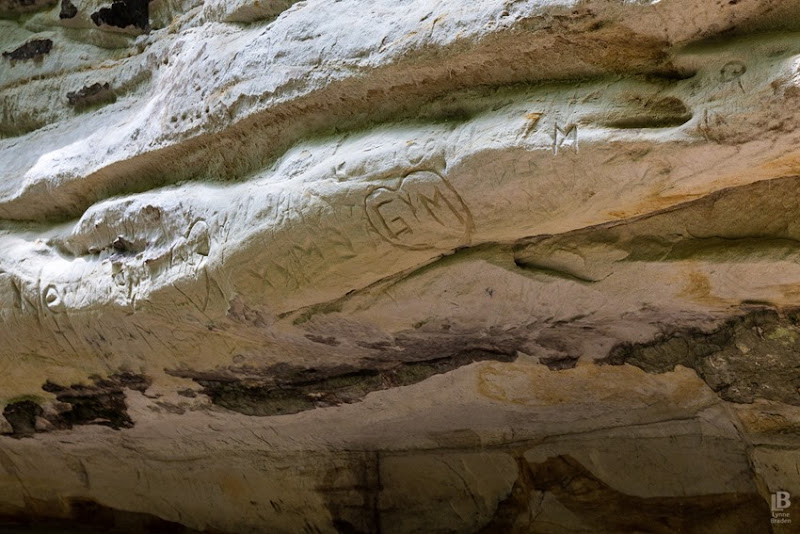 With the crowds of La Salle canyon (& that rant) behind me, it was time to enjoy more nature again.  This wild phlox did the trick! 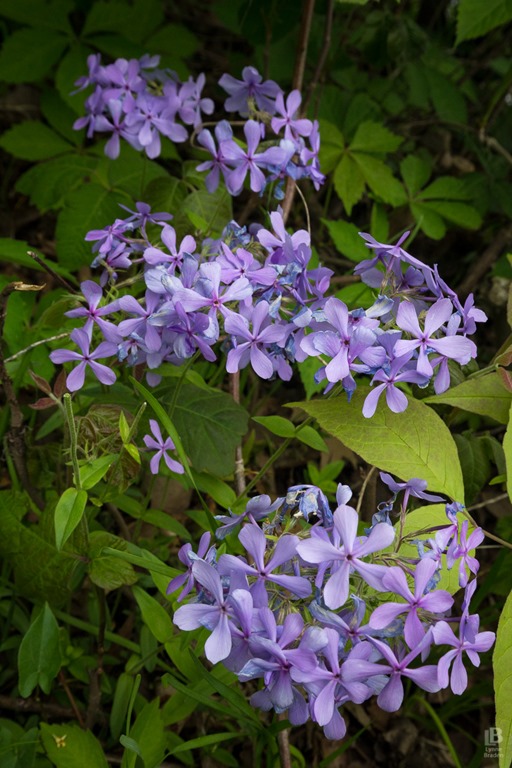 I stopped one last time along the riverfront to watch a barge making its way up towards Chicago. Feeling revitalized, I realized that I now had all the strength and courage I’d need to climb back out of this canyon (and to battle this summer’s cancer fight as well)! 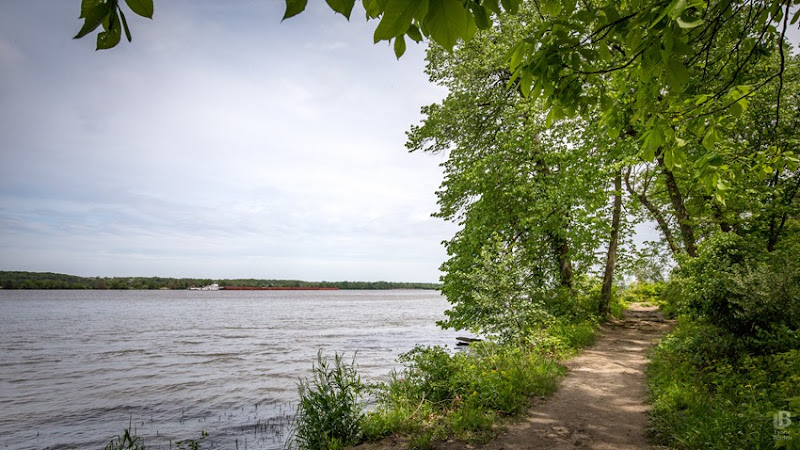 Posted by Unknown at 12:19:00 AM
Email ThisBlogThis!Share to TwitterShare to FacebookShare to Pinterest
Labels: Cancer, Hiking, Illinois, Nature