Each ranger at Bryce Canyon National Park has their own slightly different rankings of hiking recommendations to offer visitors when they approach the information desk.  Some love to recommend the less popular hikes first (in hopes visitors will spread out a bit more), while others stick with the tried and true "Queen's/Navajo Combination," noted in the brochure as the park's most popular hike.

I always tried to listen first to what the visitor's fitness level and interests were before prioritizing a list.  If someone was only in the park for the day, and had adequate boots and fitness level, I'd recommend starting with the Queen's/Navajo 3-mile loop, and combining it with Peek-a-Boo for the very best hiking views in the park.

But if someone had multiple days, or was looking for a more solitary, intimate experience within the park, there was never a question as to the hike I'd recommend next... the 8-mile Fairyland Loop trail. 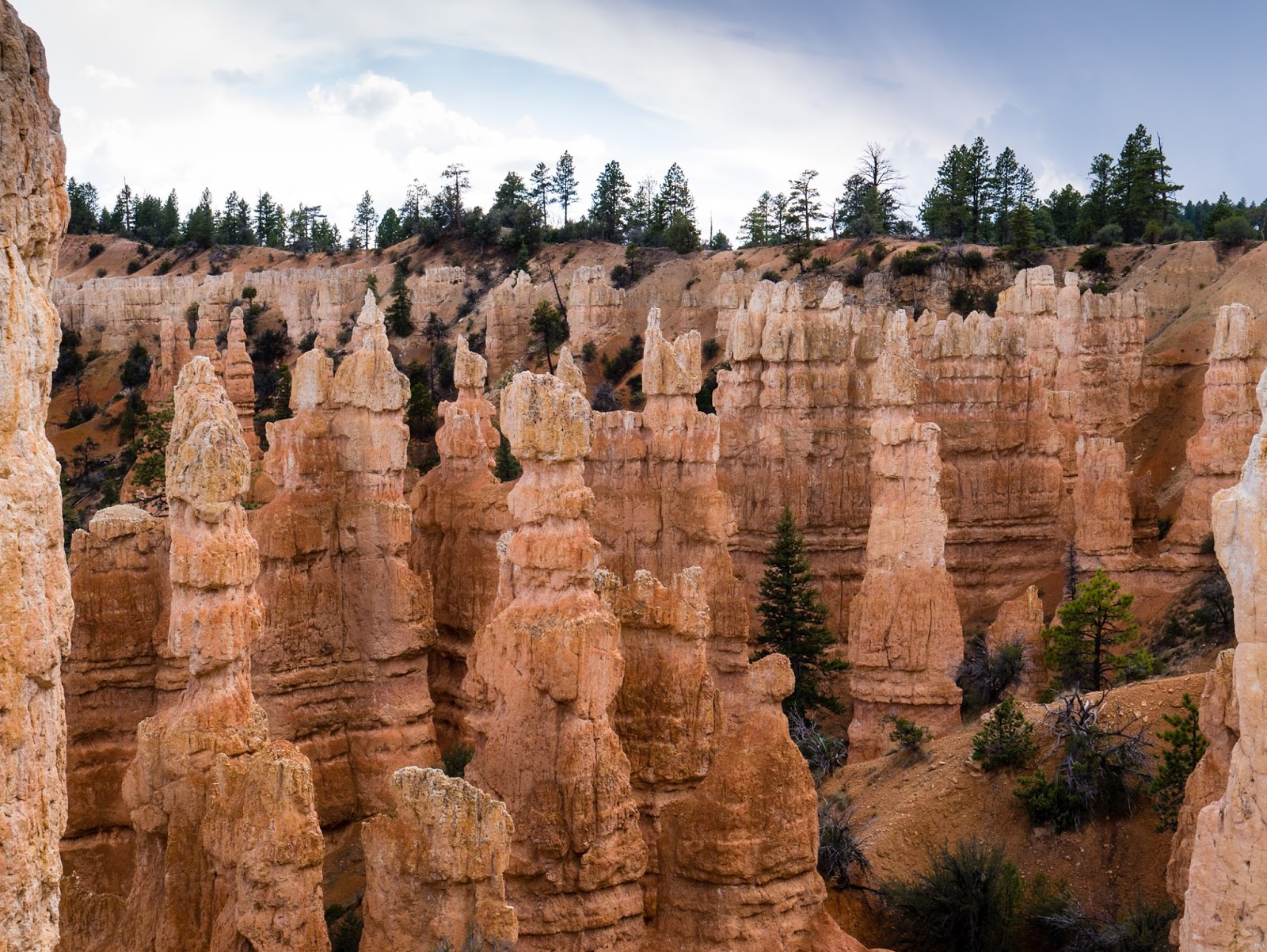 Fairyland Point is often overlooked by visitors as there is no sign displayed for its turnoff as you enter the park (that's because the turnoff is before you arrive to the fee station, and visitors will want to get that matter taken care of first before heading onto a hiking trail!).

But as you head back north towards the park exit, you'll see the sign for Fairyland clearly displayed.  Heading a mile down this road brings you to the Fairyland viewpoint and trailhead.  Unlike most other parking lots within the park, Fairyland's small lot is rarely full, so you should be able to find a spot at most times of the day.

Many rangers recommend doing the 8-mile loop clockwise from the Fairyland vista trailhead-- in other words, starting down into Fairyland canyon first and ending by walking the rim.  I hiked this direction as well, but after doing so realized that the far better/easier way to do it would be counter-clockwise instead.  In that direction, most of the steeper and/or continuous grades are now downhill rather than uphill.

While the 1.5 mile Tower Bridge portion of the trail gets a fair amount of use from day hikers, the rest of the Fairyland Loop is blissfully quiet.  I rarely encountered any more than 5-10 people when hiking this trail.  Pretty incredible for a busy summer day at a popular national park!

Fairyland Canyon, from the rimtop trailhead, is smaller and less spectacular than the larger amphitheater to the south, but in the mid-morning, its hoodoos can glow from the sun's reflection transforming it to something magical.

The trail descends gently into the canyon where fragrant, shady pines await. 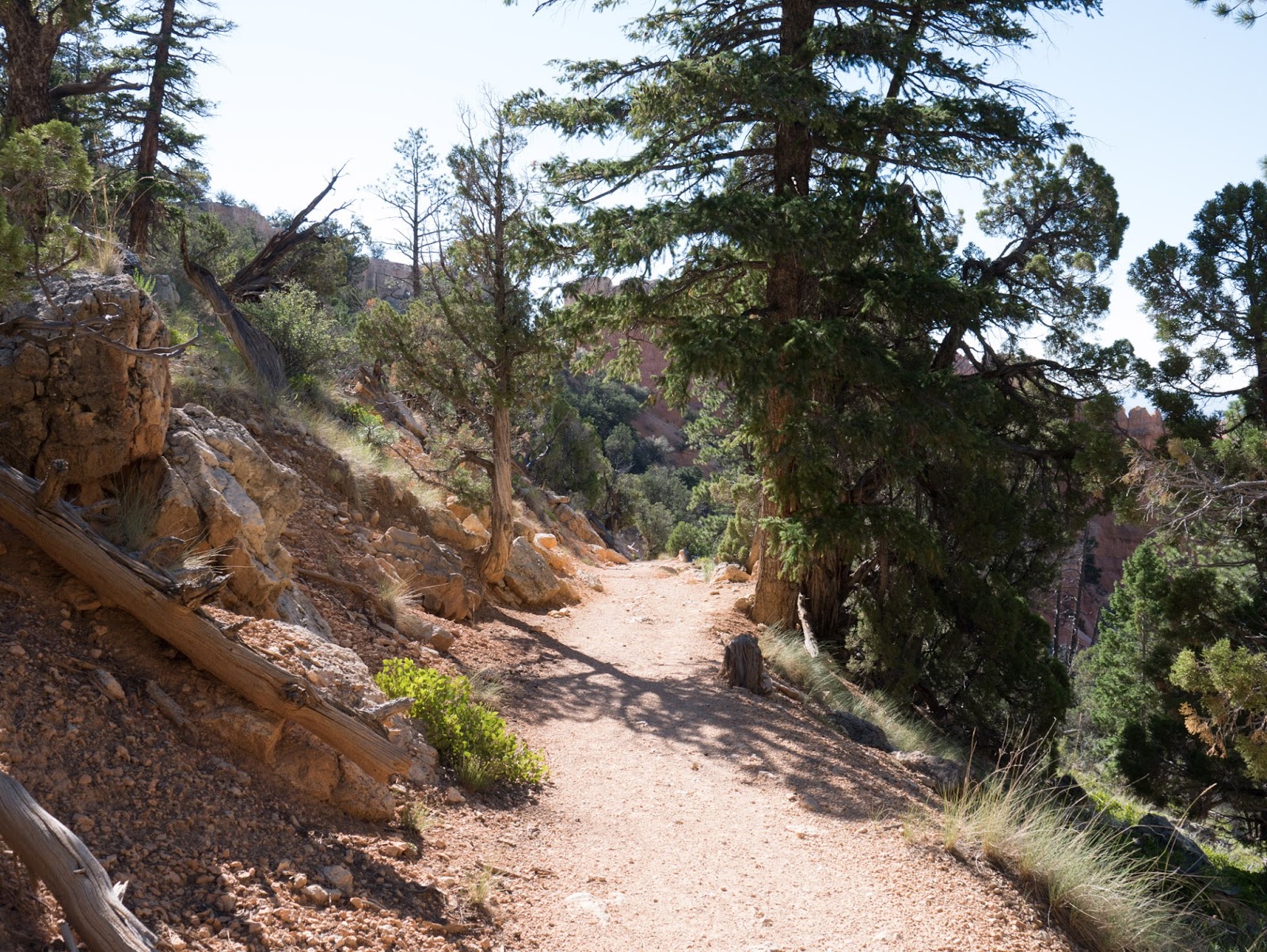 From the canyon floor, Fairyland's hoodoos take on an entirely different look. 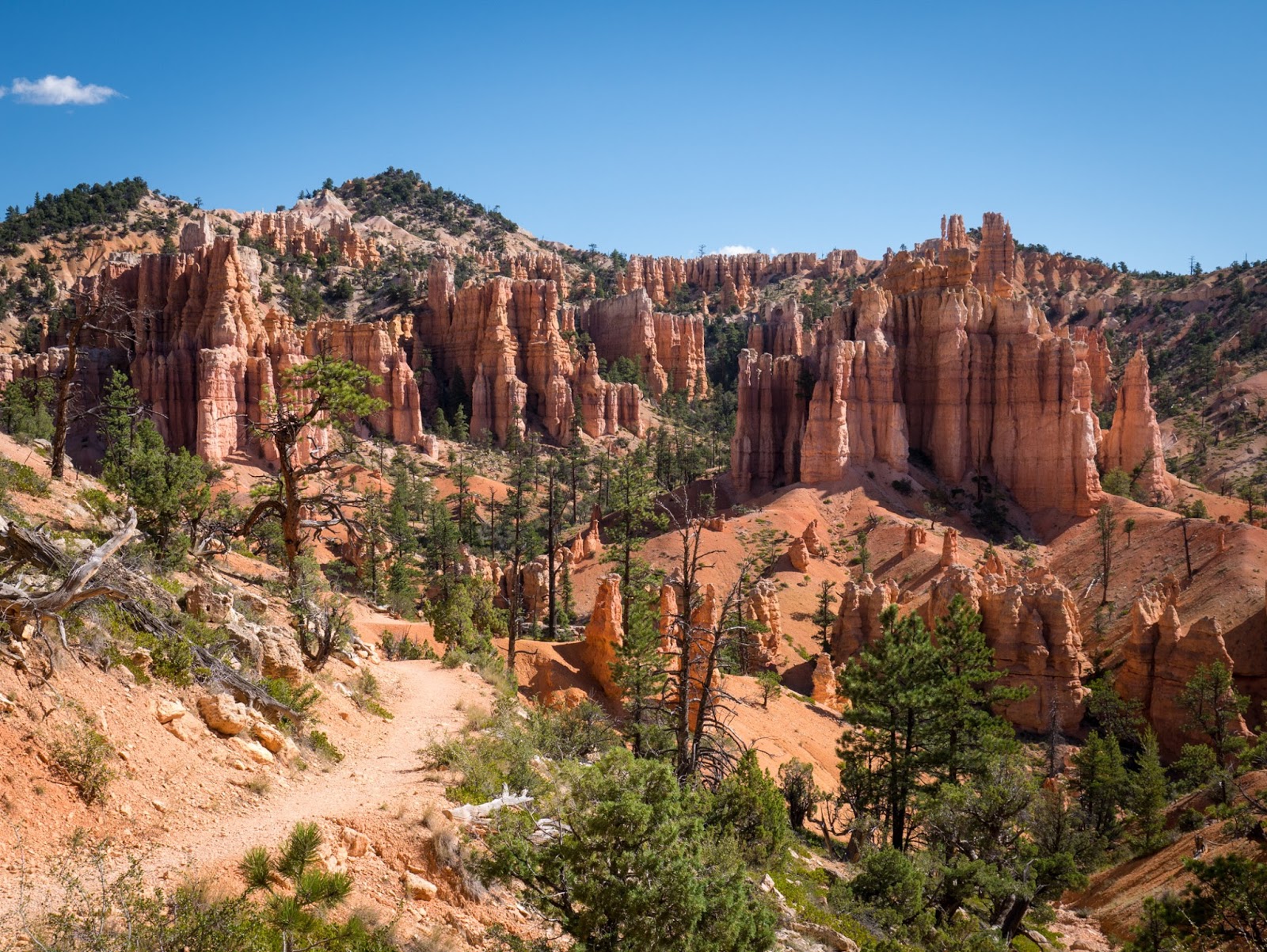 Climbing out of the canyon, I reach a plateau where I can see down to the lush, green farmland in the Tropic valley below Bryce.  Quickly though, the trail turns back towards an entirely new view of the park.  Now, the mix of pines and hoodoos is replaced entirely by a 360-degree view of red rock!  It is one of the most spectacular views of the whole park...and one I am experiencing entirely to myself! 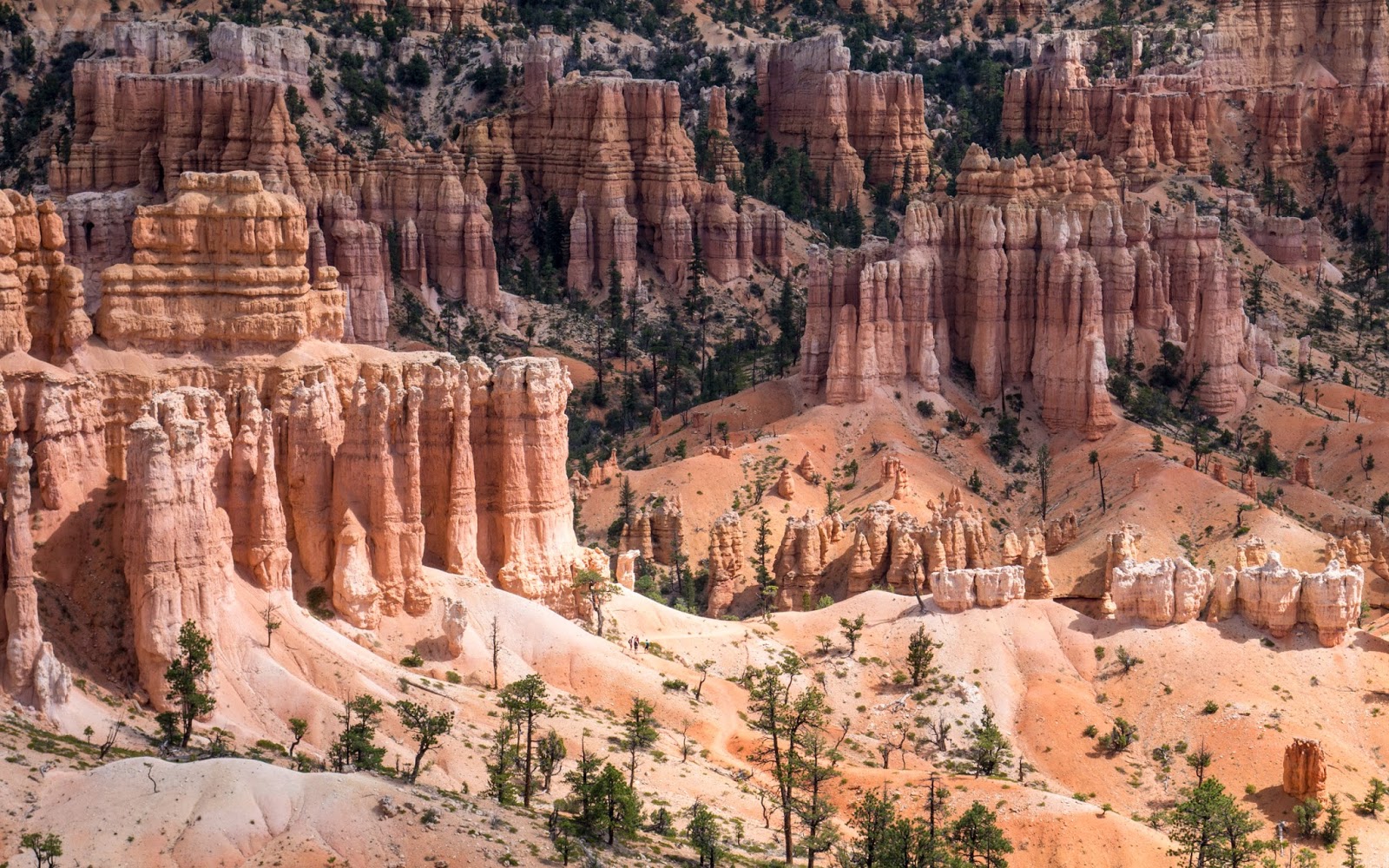 In one direction, is Boat Mesa circled by hundreds of hoodoos...

To the other direction, the kaleidoscope of colors and rock forming Bryce's main amphitheater.

As I stand there admiring the view, a visitor approaches from the opposite direction.  On this day, I'm hiking as a "roving ranger" rather than an incognito tourist hiker.  As he spots my uniform in the distance, he shouts out: "Now, you can't tell me they actually PAY you to hike this trail, do they?"  I laugh as he gets closer and point to my arm badge:  "They don't pay me a penny-- I'm a volunteer!"

We have a good laugh, share some trail information, and even take photos for one another before continuing on.   Ranger Lynne...working only for the grins of living in a national park all summer! 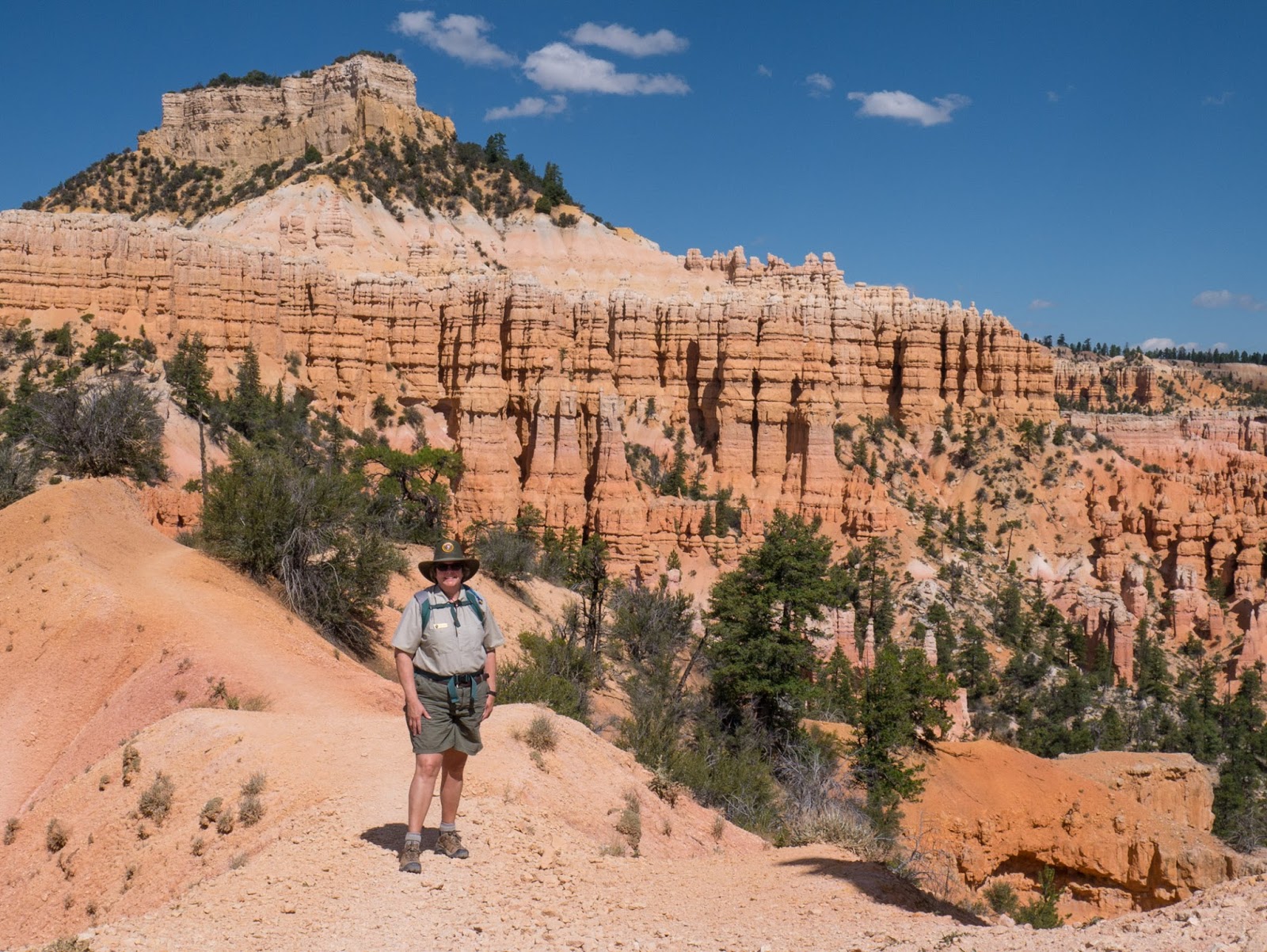 Soon, I spot a few more famous landmarks along the trail.   The "Tower Bridge" formation, named after the London landmark-- 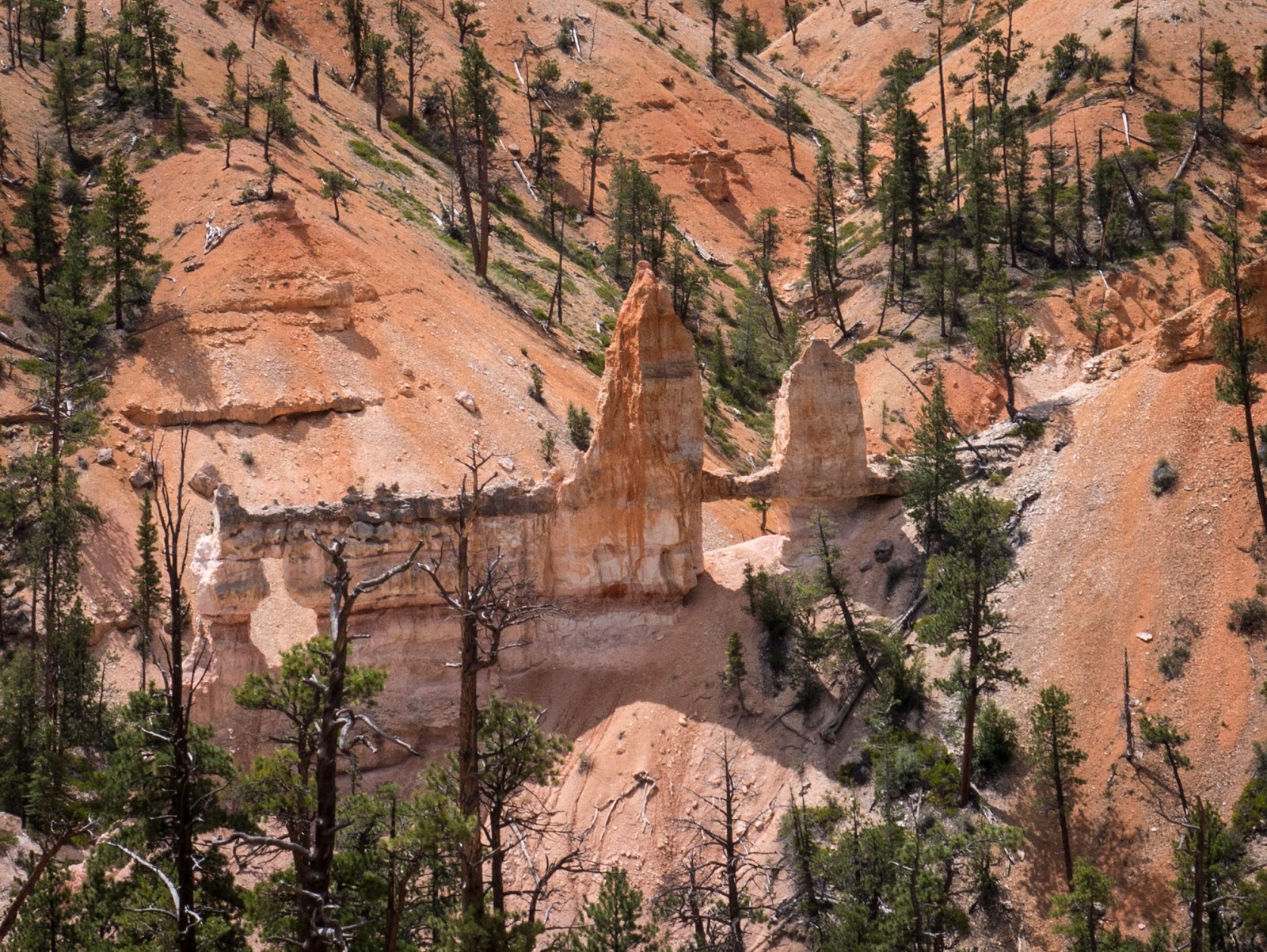 and the "Chinese Wall" named after the Great Wall of China:

By the time I begin climbing out of the canyon towards the Tower Bridge trailhead, the heat of the afternoon sun is taking its toll.  I find a welcome wall of shady rock to sit beneath, and notice a cool bonus-- this window view! 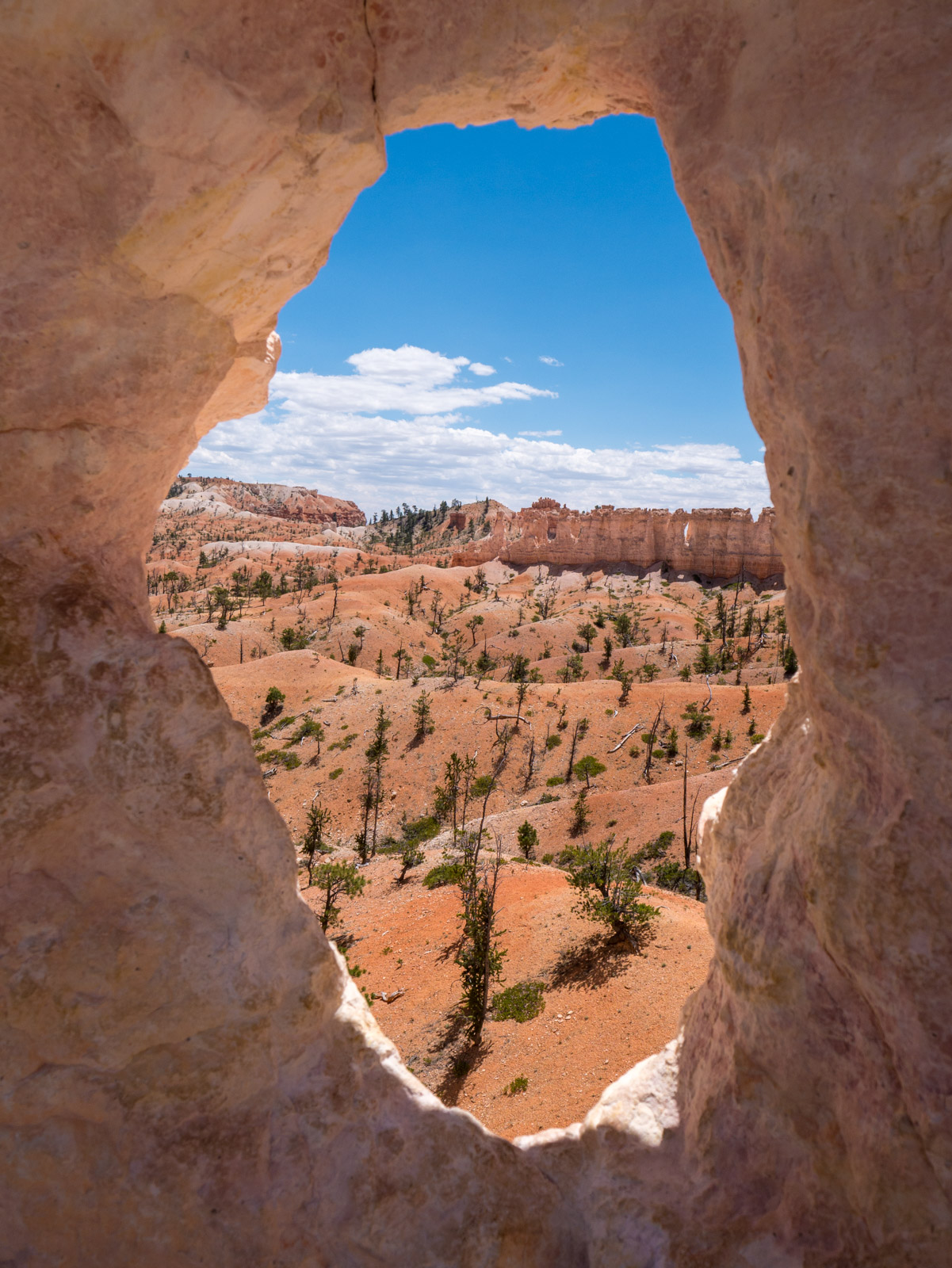 Finally reaching the rim, its now just 3 more miles of up and down to go to get back to the Fairyland trailhead.  While the hike is still pretty strenuous, the rimtop vistas are worth it and even have a few distant windows of their own. 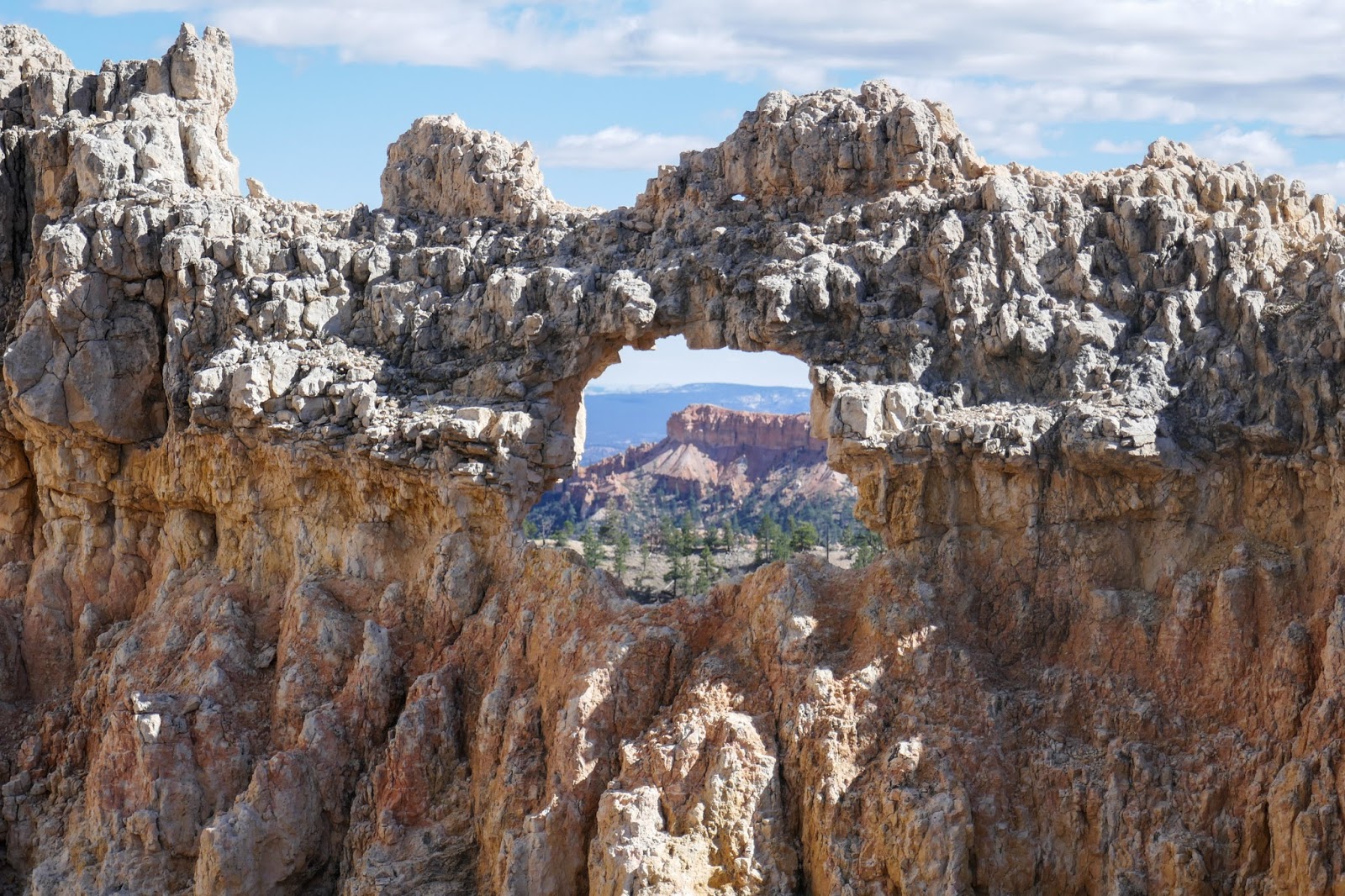 As I rest at one particular spot, I notice a bird darting from the top of a hoodoo down into the canyon and back again.  Could this be the elusive Clark's Nutcracker that I've yet to see?  Why, yes it is! 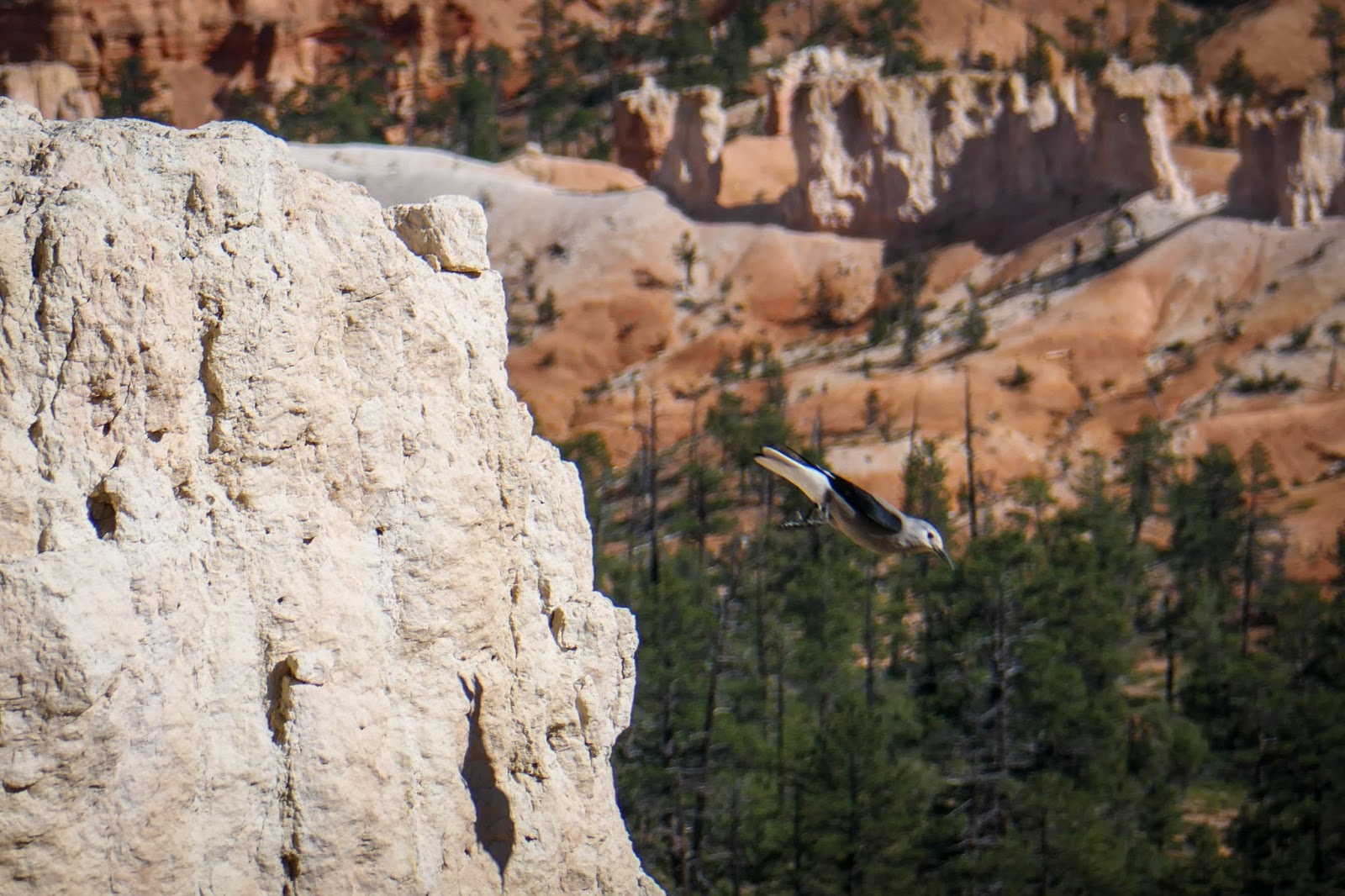 If you look closely (particularly around Sunset Point), you'll see a few small pine trees growing, impossibly, atop some of the hoodoos.  How did those trees get there?  The answer is the Clark's Nutcracker!  This bird stores its nuts and seeds up on top of the hoodoos (where it hopes to retrieve them later in the season when food is scarce).  Great idea, but the bird often stores more than it manages to eat, so the excess seeds can sometimes germinate and eventually become saplings.  Isn't nature amazing?!!

I finish out my hike with one final look from the rim.  Fairyland is an all-day, exhausting 8-mile hike.  But highly rewarding for those seeking solace and great views! 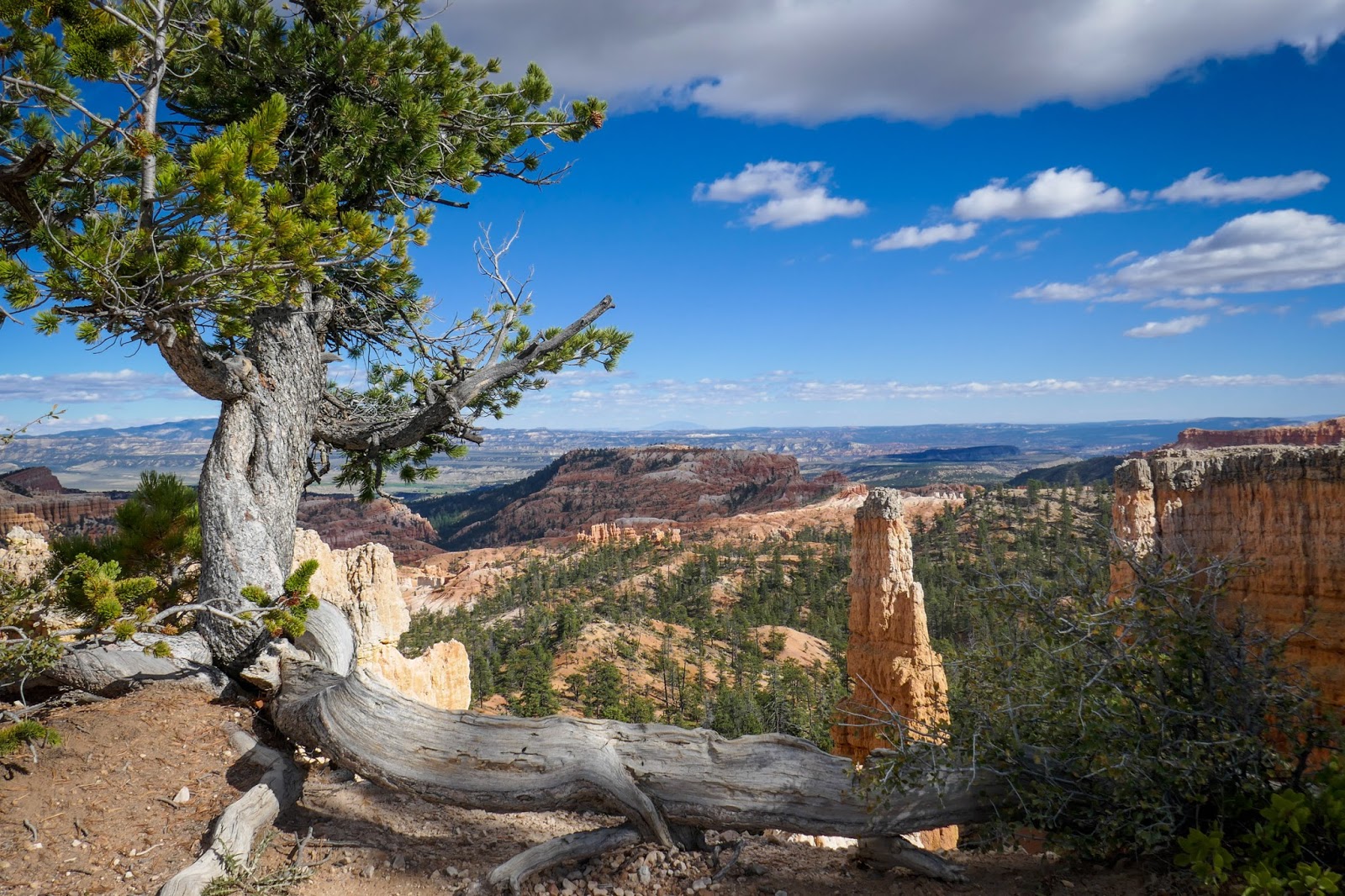