As the calendar flipped into September, I suddenly realized that I only had a few weeks in southern Utah...and I'd not yet visited any of the surrounding iconic places that I'd vowed to see before leaving.  Time for some quick road trips!

My first trip was an overnight tent camping trip up to Capitol Reef National Park, three hours northeast of Bryce along the stunningly gorgeous Utah Highway 12. 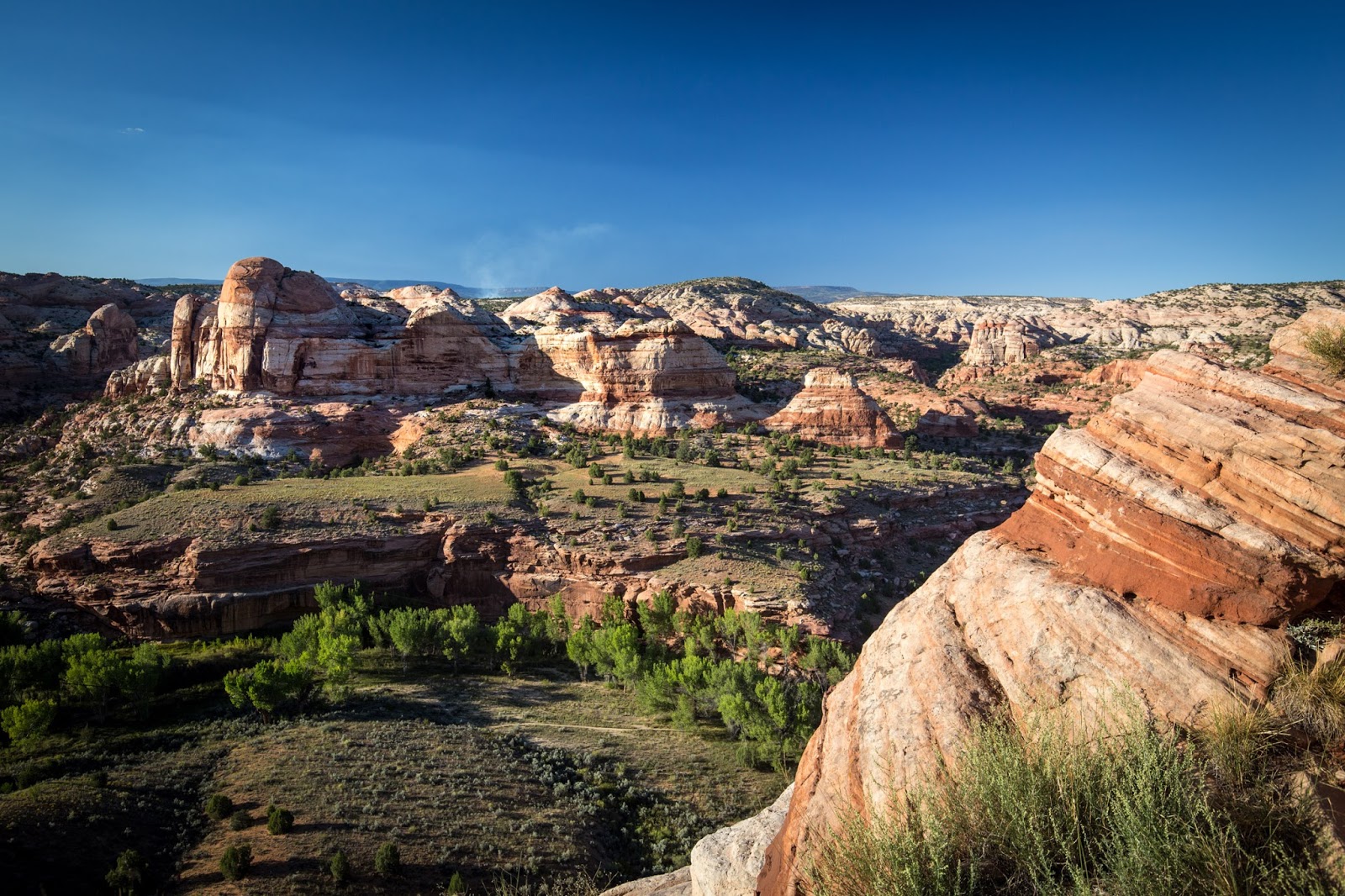 Scenic Byway 12 has been described as one of the most-scenic drives in the entire U.S., and I would have to agree-- especially the stretch between Escalante and Boulder (where the above photo was taken).  If you do this drive at the "golden hours" (early morning after sunrise, or late afternoon before sunset), you won't make very fast progress as you'll be continually stopping along the side of the road to snap photos!

After my snail's pace up Highway 12, I finally made it to Capitol Reef's Visitor Center by early afternoon to have a chat with the rangers about my intended camping spot for the night-- the free, first-come first-served Cathedral Valley campground on the northern side of the park.  The ranger at the desk said that campsites should likely still be available on this post-Labor Day weekday evening, but that I'd have to ford a river with 10" of water to get there.  Hmm, my Tracker only has 8" of ground clearance.  Should I go for it?  I figured I'd drive to the trailhead to check it out.

I found the dirt road leading up to the river just fine, but looking across to the other side, I could not see where the trail continued.  Then, I remembered the ranger's words again "ford the river," meaning not simply to cross it, but to drive down it.  Sure enough, I looked down the shoreline a few dozen yards and finally found the other side of the road.  YIKES! So, THIS is what keeps the "riff raff" off this trail! 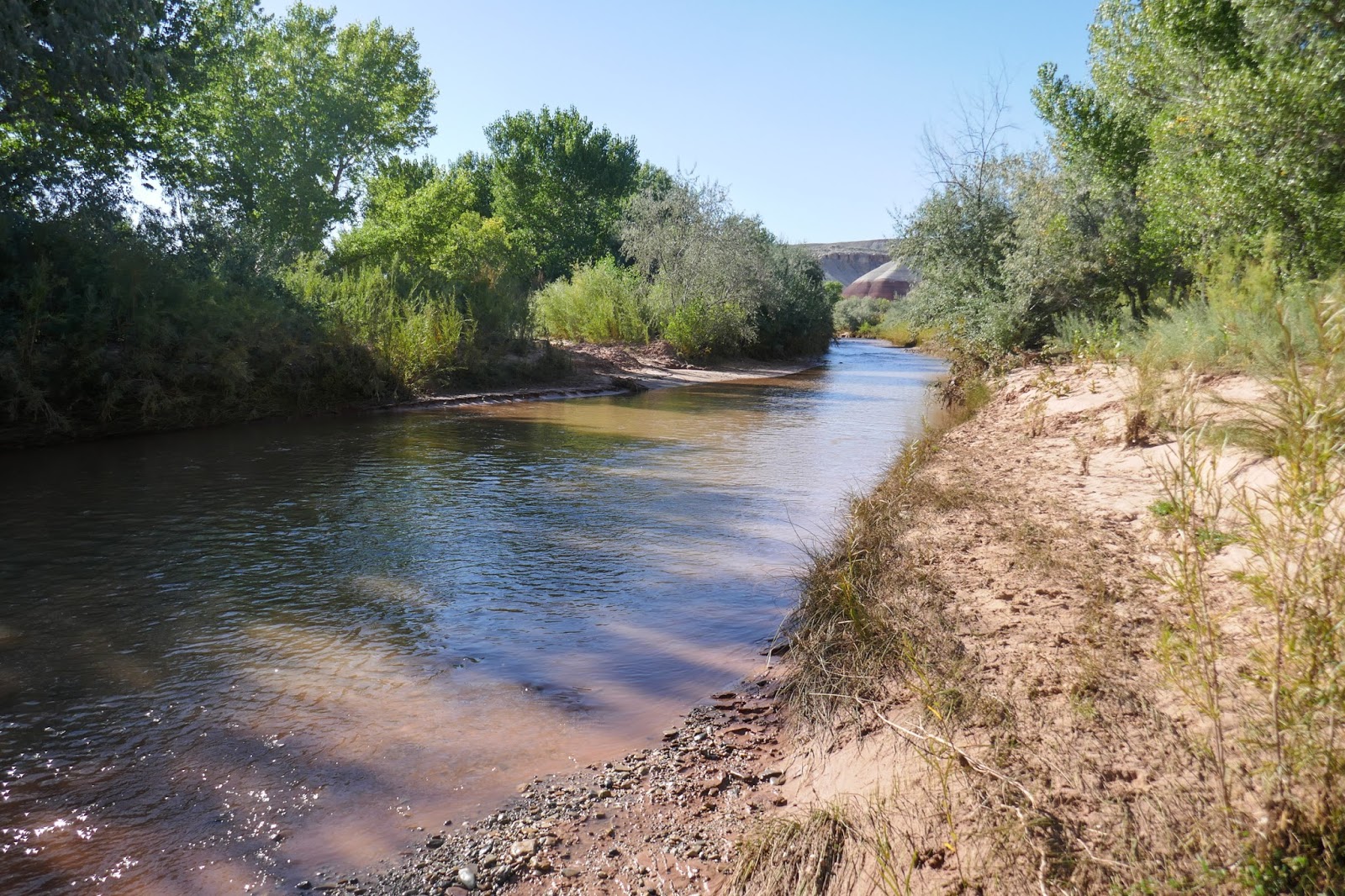 The river waters were muddy and murky-- no way of really telling for sure how deep it was.  This would either be an easy crossing for my little Tracker...or one of the dumbest places I'd ever get towed out of!  I figured since I'd come all that way, I might as well give it a shot.  So, I slipped the Tracker into 4WD mode and pointed it right into the water!

A few seconds later, I was safely on the other side.  The Tracker likely wondered what all the fuss was about-- the rocker panels didn't even get wet! 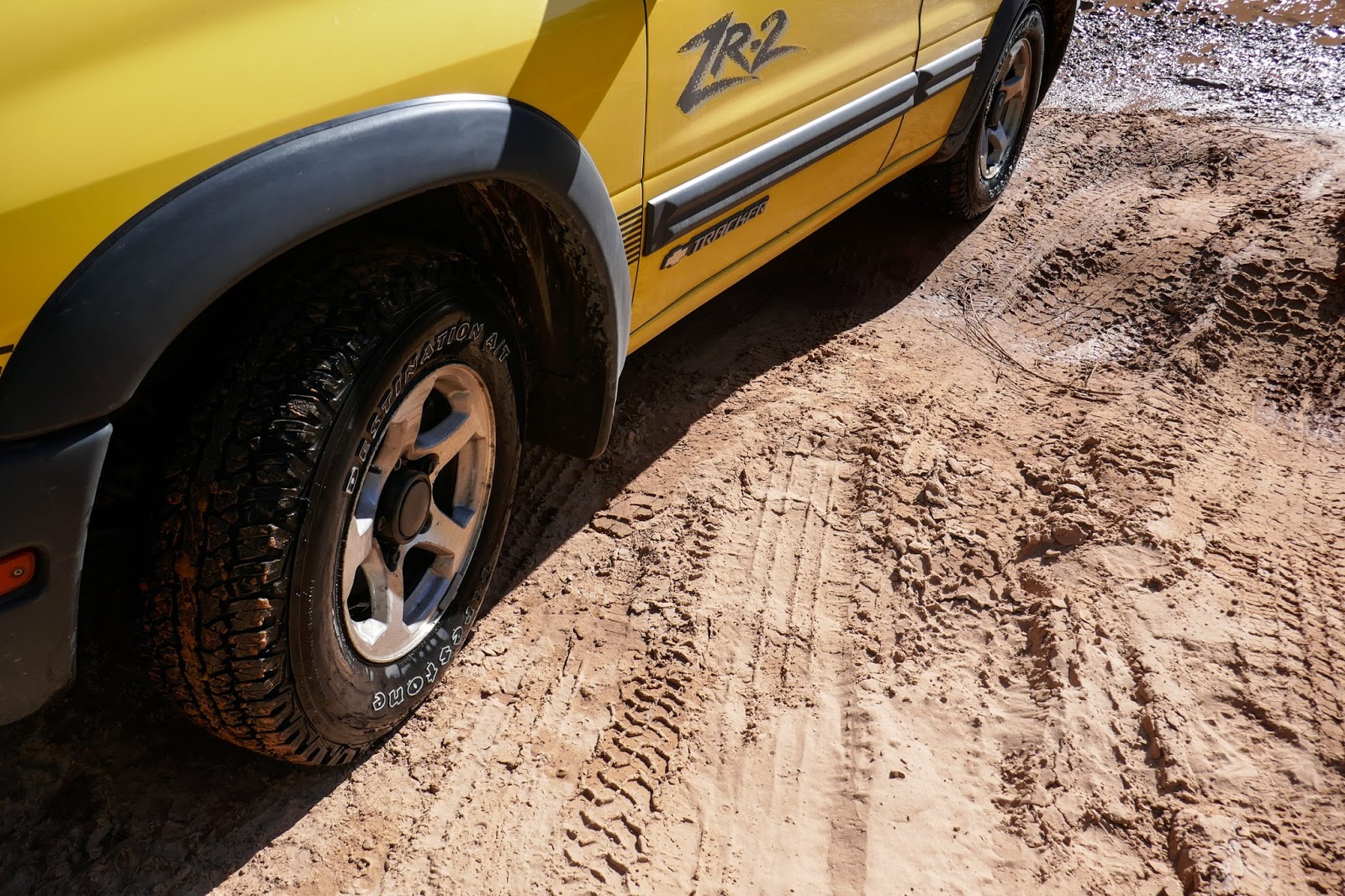 Now the fun would begin-- 28 miles of 4-wheel driving (with no cell phone coverage, of course) to reach my campground before sunset.  Fortunately, the road was in pretty good shape for most sections, and I was able to make the trip in about 3 hours even with frequent stops for photos.

I arrived to the campground area in the very final minutes of sunlight.  Amazing valley views greeted me on both sides of the road.

After the sun set behind the mountains, I headed over to the campground.  Thankfully, there were just two other sites taken and I had my pick of the half dozen remaining sites.  I picked the site just a short walk to the outhouse (since I'd be tenting it without the comforts of my indoor Winnie bathroom).

With my pup tent pitched and ready, I fired up my stove and made myself a tasty spaghetti for dinner.  It was a relatively warm, clear night and just perfect for stargazing!  And a quick handheld shot of the tent beneath the rising moon-- 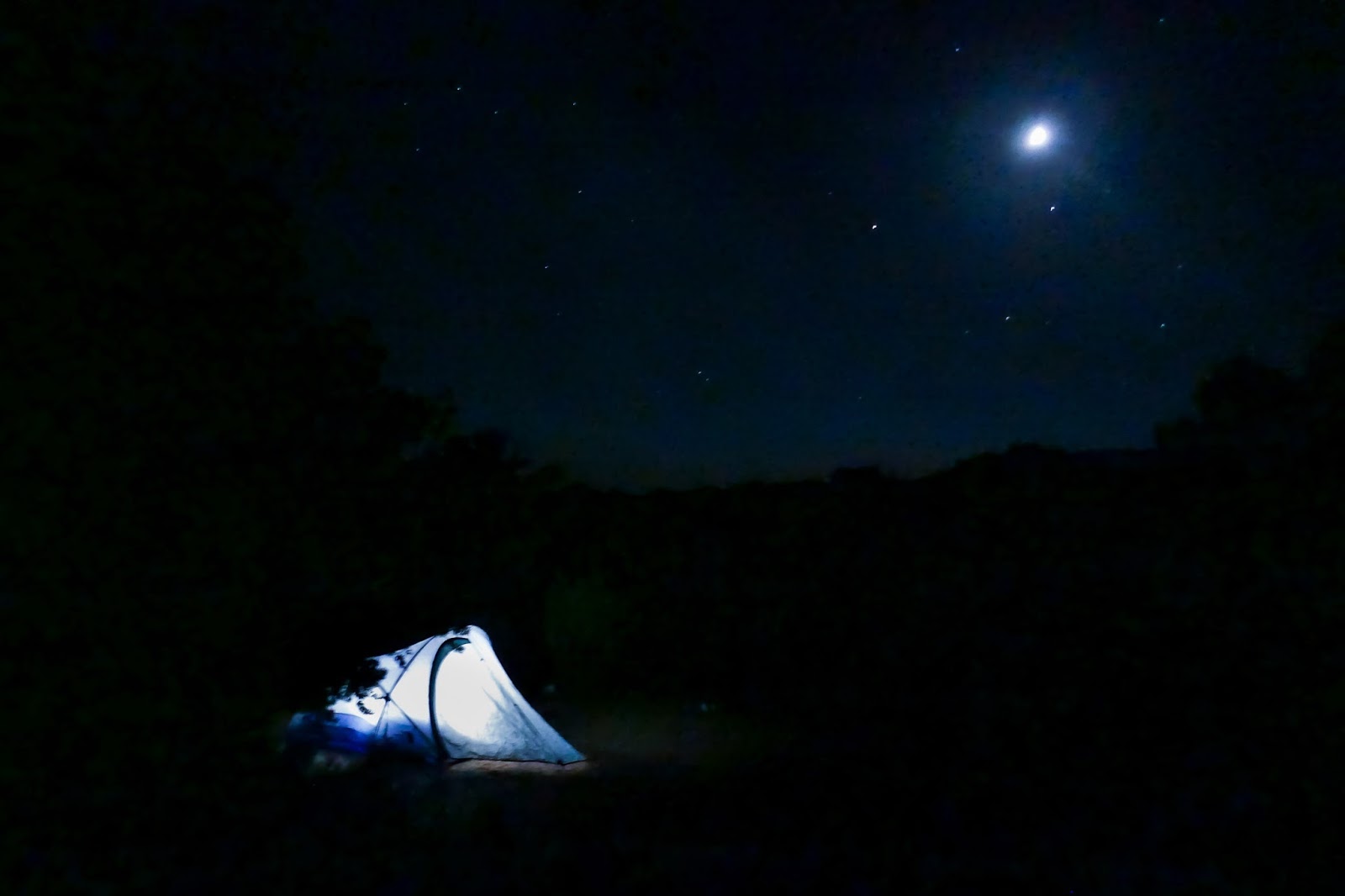 The next morning, I headed down into Cathedral Valley to complete the remaining 30 miles of the loop trail.  It was an incredible drive, and I only encountered 1 other car on the entire trip!

The highlight was seeing the iconic Temple of the Sun and Temple of the Moon monoliths rising hundreds of feet out of the flat valley floor.  While they were within a half-mile of one another, I could never quite get both of them in the same shot due to the position of the mid-morning sun.  But when I later made a pit stop next to the Temple of the Moon, the lighting was just right to show the magnitude of this rock next to the tiny Tracker...and consider that Temple of the Moon is the smaller of the two temples! 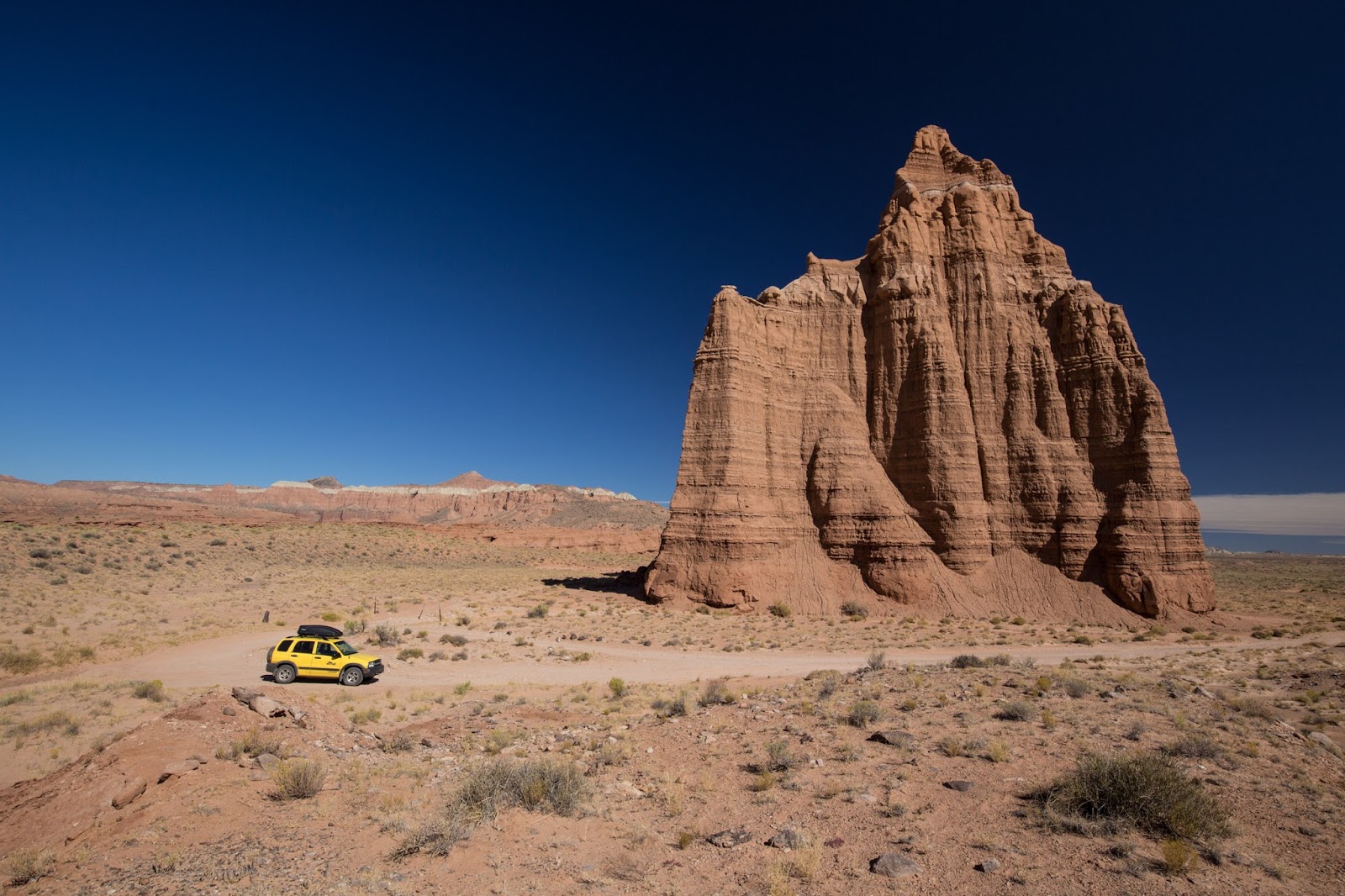 Upon finishing the loop trail and reaching pavement again, I still had a few extra hours to see more of the park, so I headed back over to Fruita to do the 8-mile paved Scenic Drive.

Capitol Reef NP protects a 100-mile-long expanse of rock known as Waterpocket Fold, that juts hundreds of feet above the relatively flat desert alongside of it.  It's an amazing vista to see (and drive next to).

Along the Scenic Drive are a few fun side roads that take visitors through narrow canyons to hiking trailheads.  It was almost like driving through a slot canyon-- great fun! 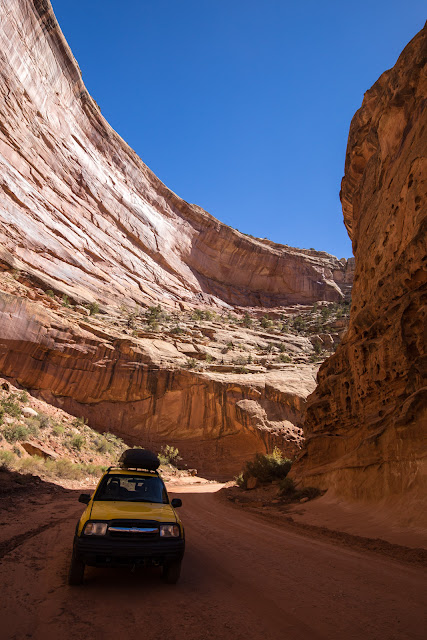 On my return trip to Bryce, I decided to take the Notom-Bullfrog Road on the east side of the park down to the Burr Trail (which would ultimately get me back to Highway 12 again).  While much of this route is paved, there is a very washboardy 25 miles or so that is not.  The scenery was great, though, and so were the steep switchbacks on the far east end of the Burr Trail where the road ascends up to the top of the Waterpocket Fold.

Getting ready to climb! 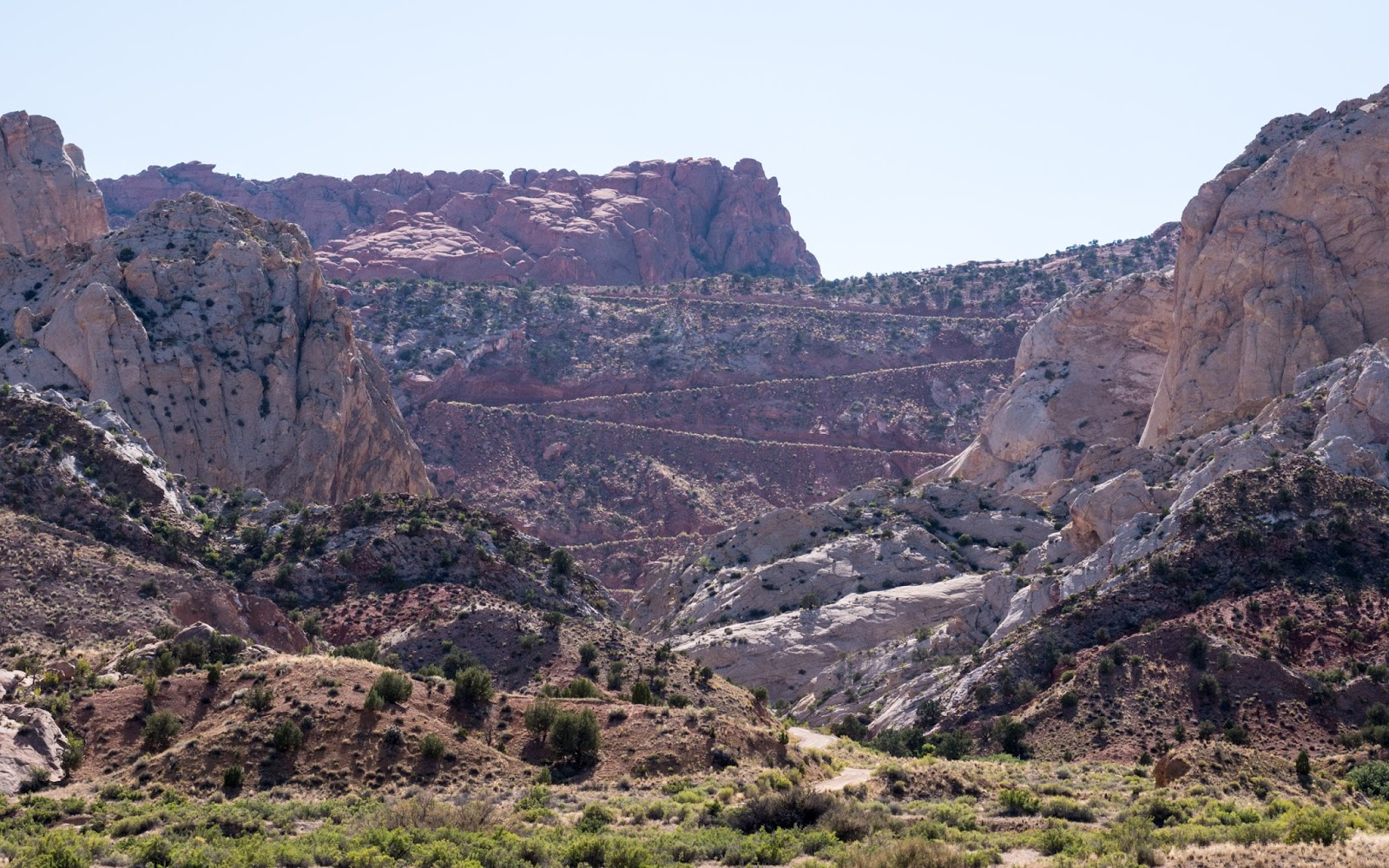 View back down the switchbacks from the top! 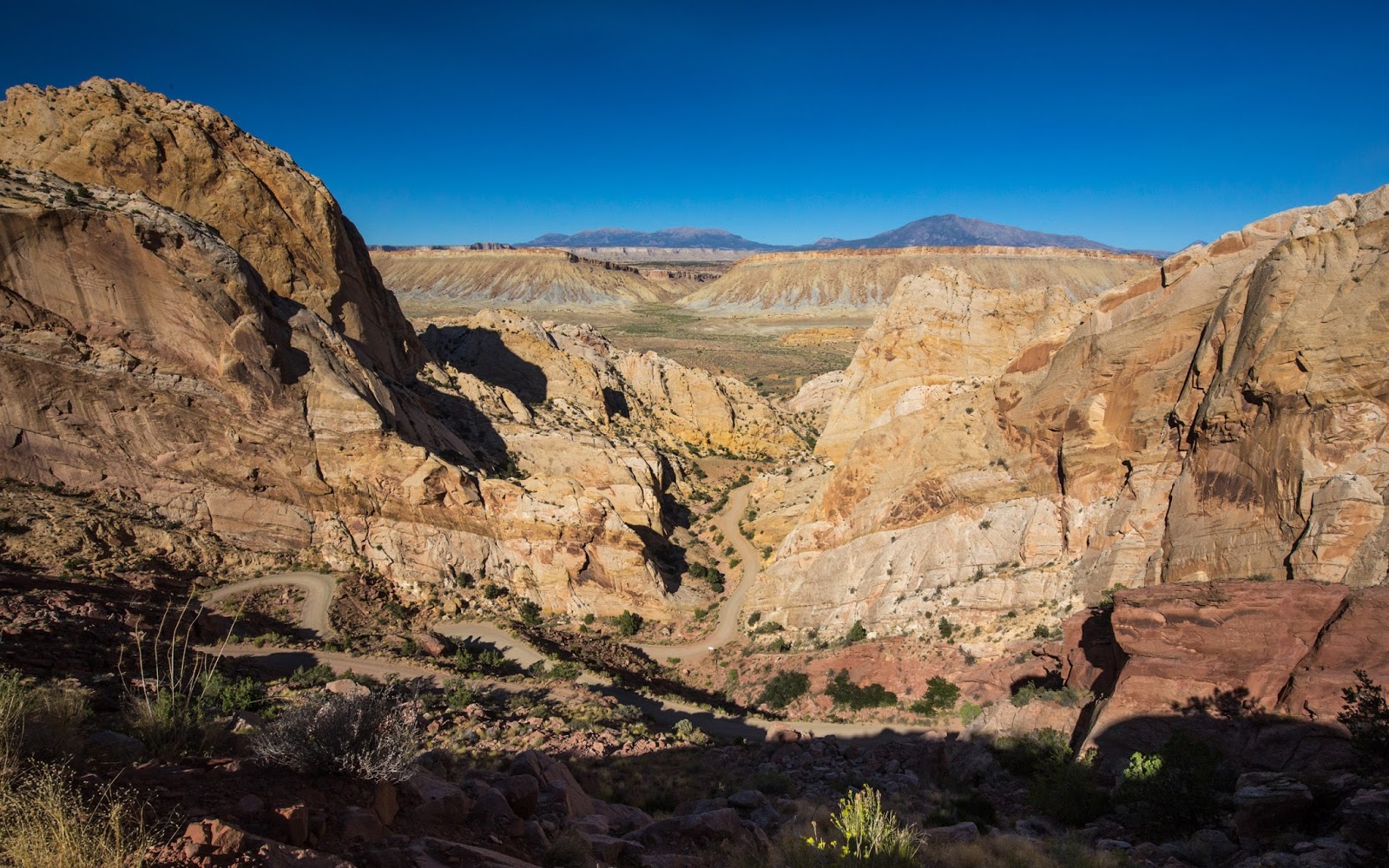 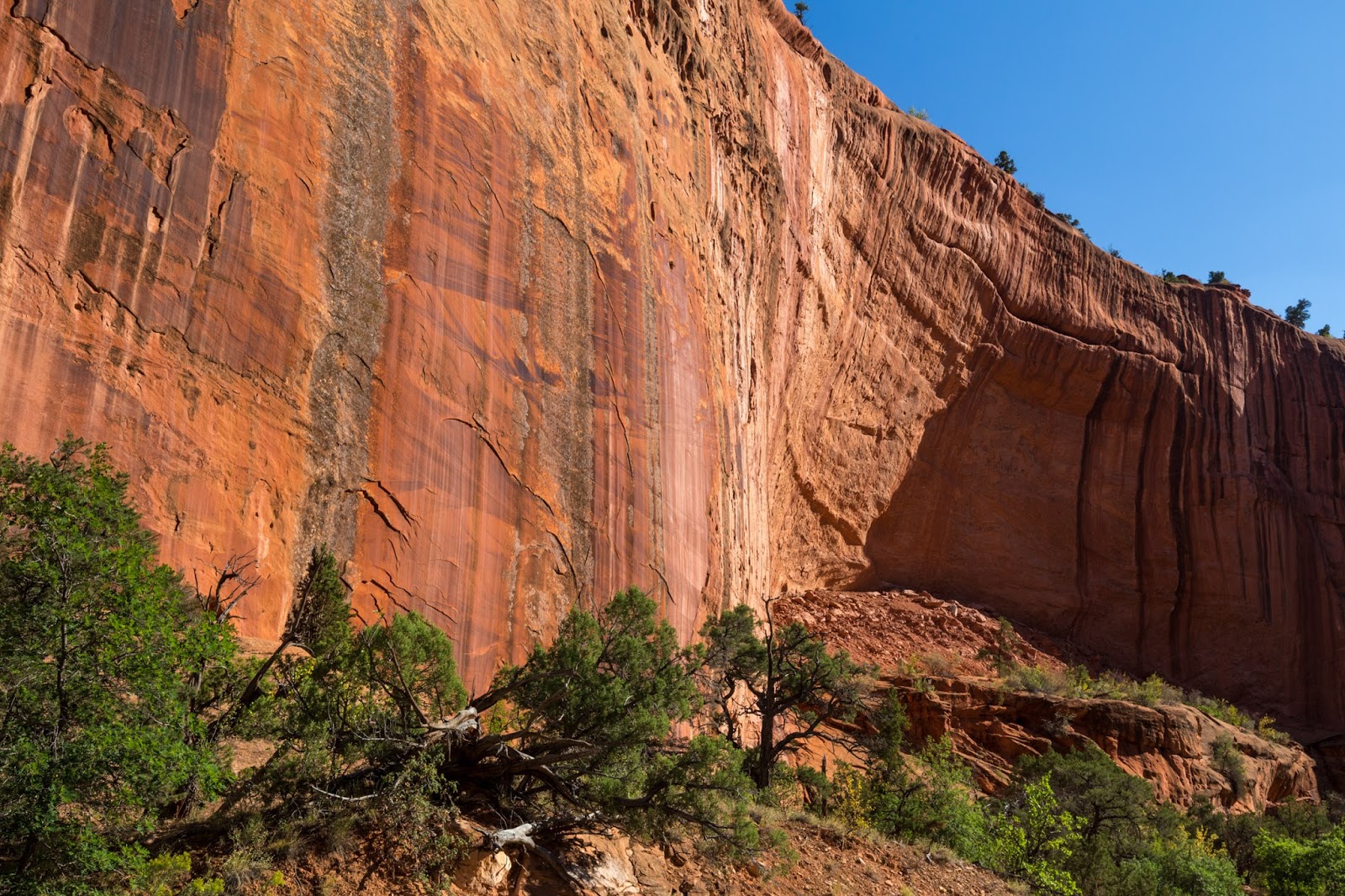 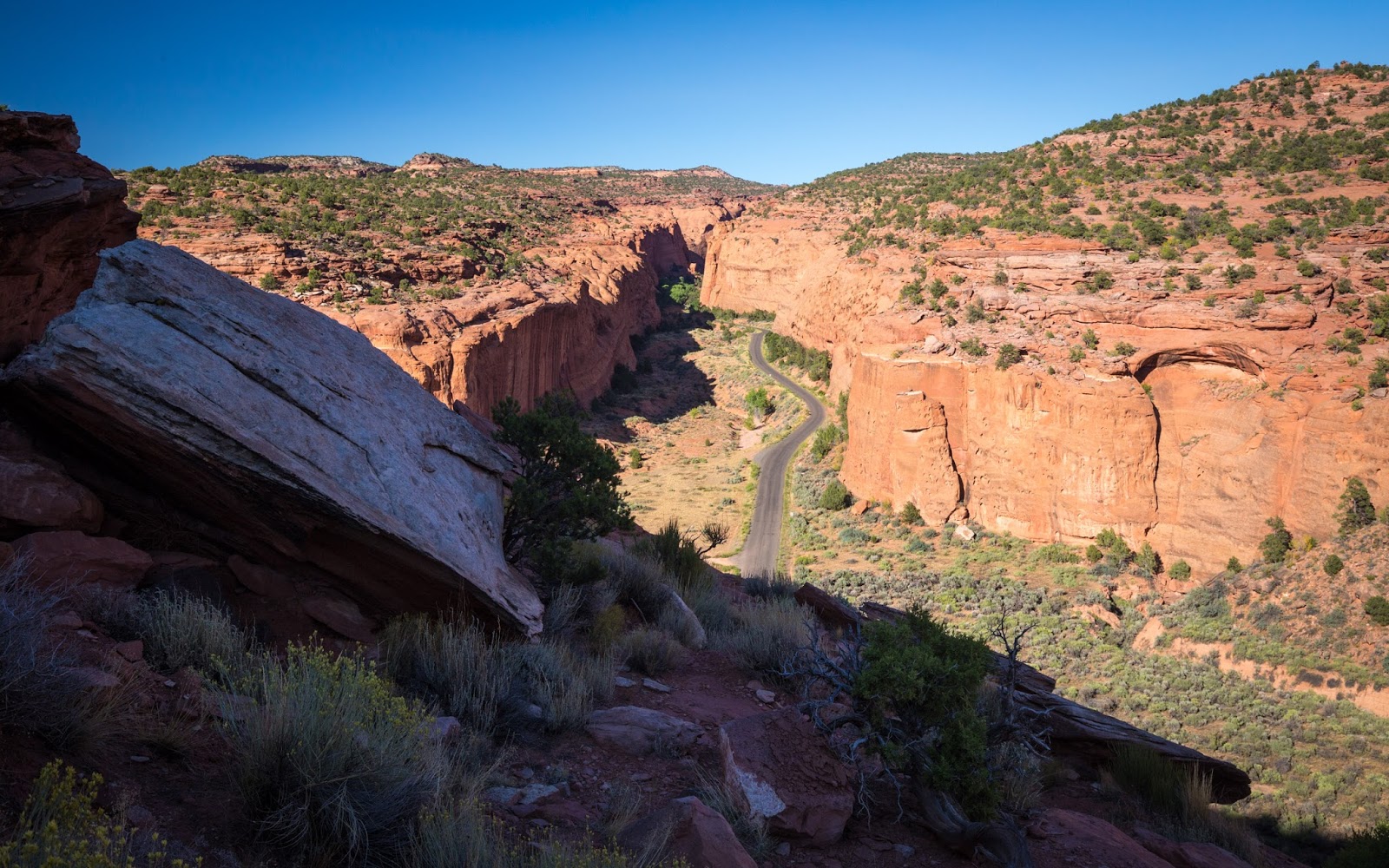 As I returned back to Highway 12 and the incredible beauty of Calf Creek south of Boulder (also part of the giant GSENM), I only wished I'd had more time to explore this magnificent area. Doggone it! 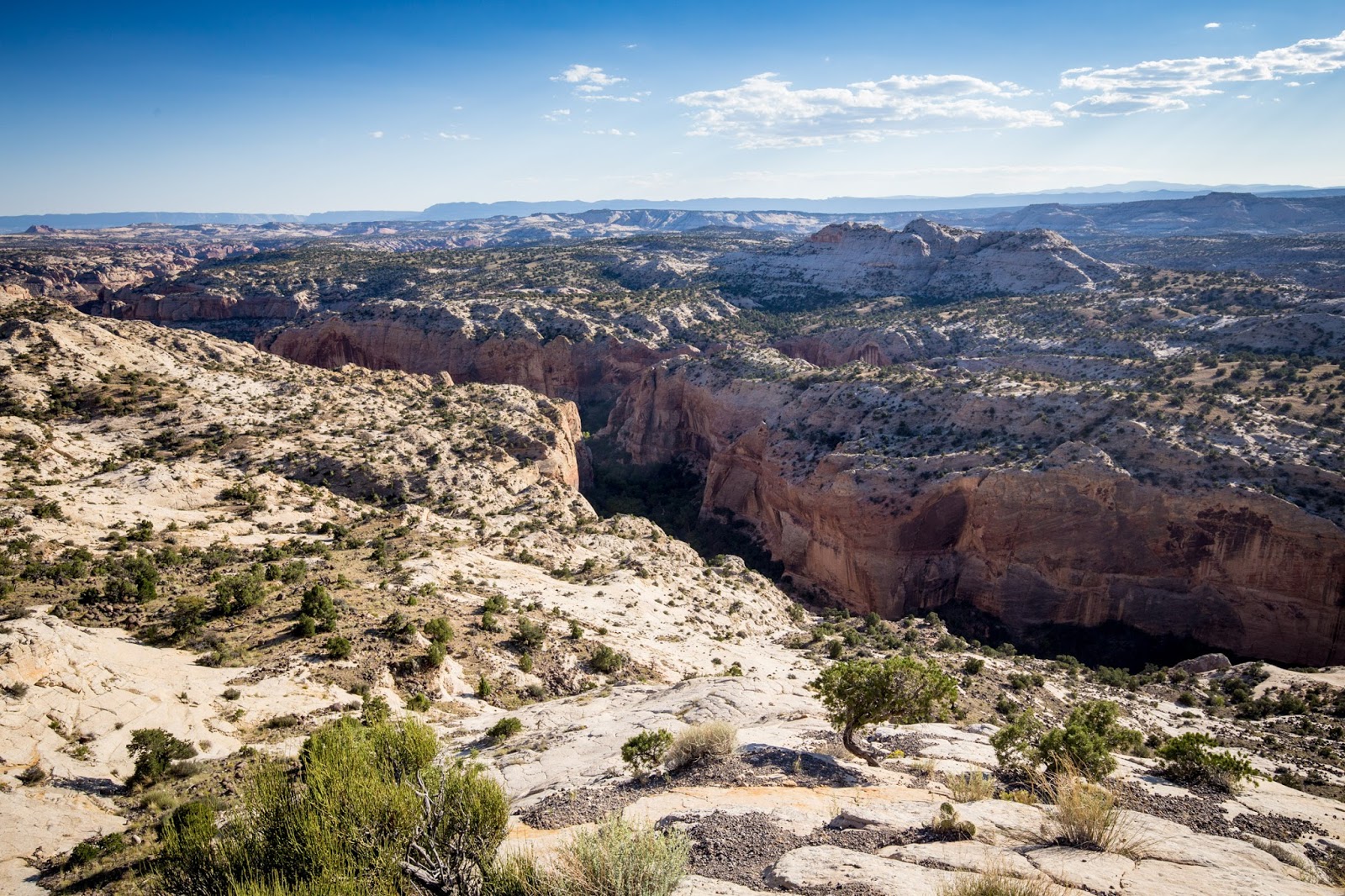 The following week, a storm was forecasted for the some of my days off, so I only had one good-weather day to be a tourist.  I decided to do a day trip down to another iconic photo destination of the West-- Horseshoe Bend just south of Page, Arizona.

I left Bryce in the wee dark hours before dawn in order to make it to Horseshoe by the prime late-morning photo hours.  Taking the "paved route" via Kanab, Utah, it took me about 3 hours from start to finish.

The 3/4-mile trail from the parking lot to the overlook was already getting hot (well into the 90's and quite a change from the below-freezing temps of Bryce's pre-dawn hours)!  The trail was also getting crowded with, primarily, Chinese tour bus tourists who were wearing all sorts of comical footwear (one gal even wearing sequined formal pumps!) completely ill-suited to the sandy desert terrain.

Finally, we arrived to the spot overlooking the Colorado river that we'd seen before in so many photos-- Horseshoe Bend.  What an amazing sight! 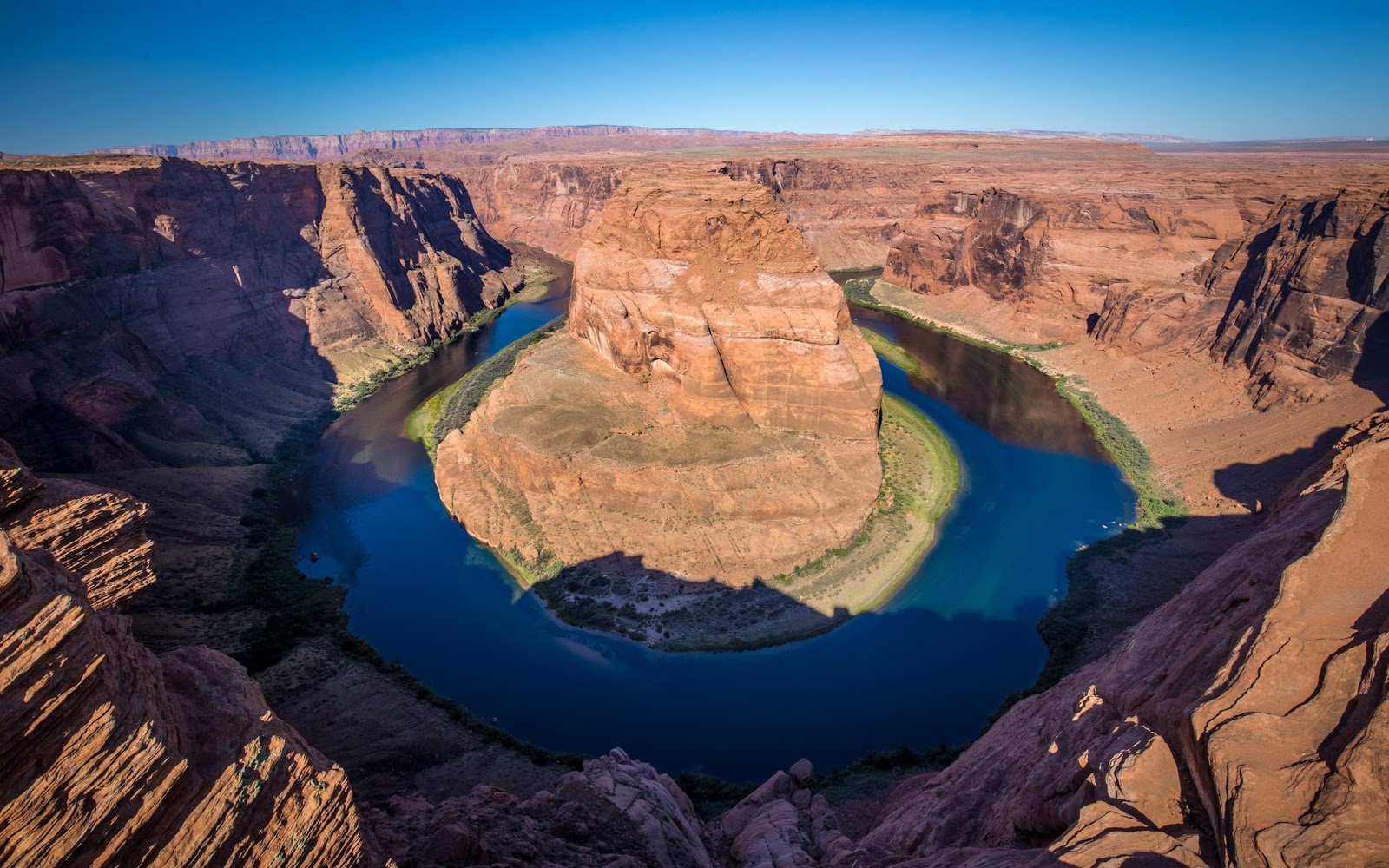 Try as I might to capture a different view of this place, nothing could compare to just the straight-on view encompassing the full "horseshoe." 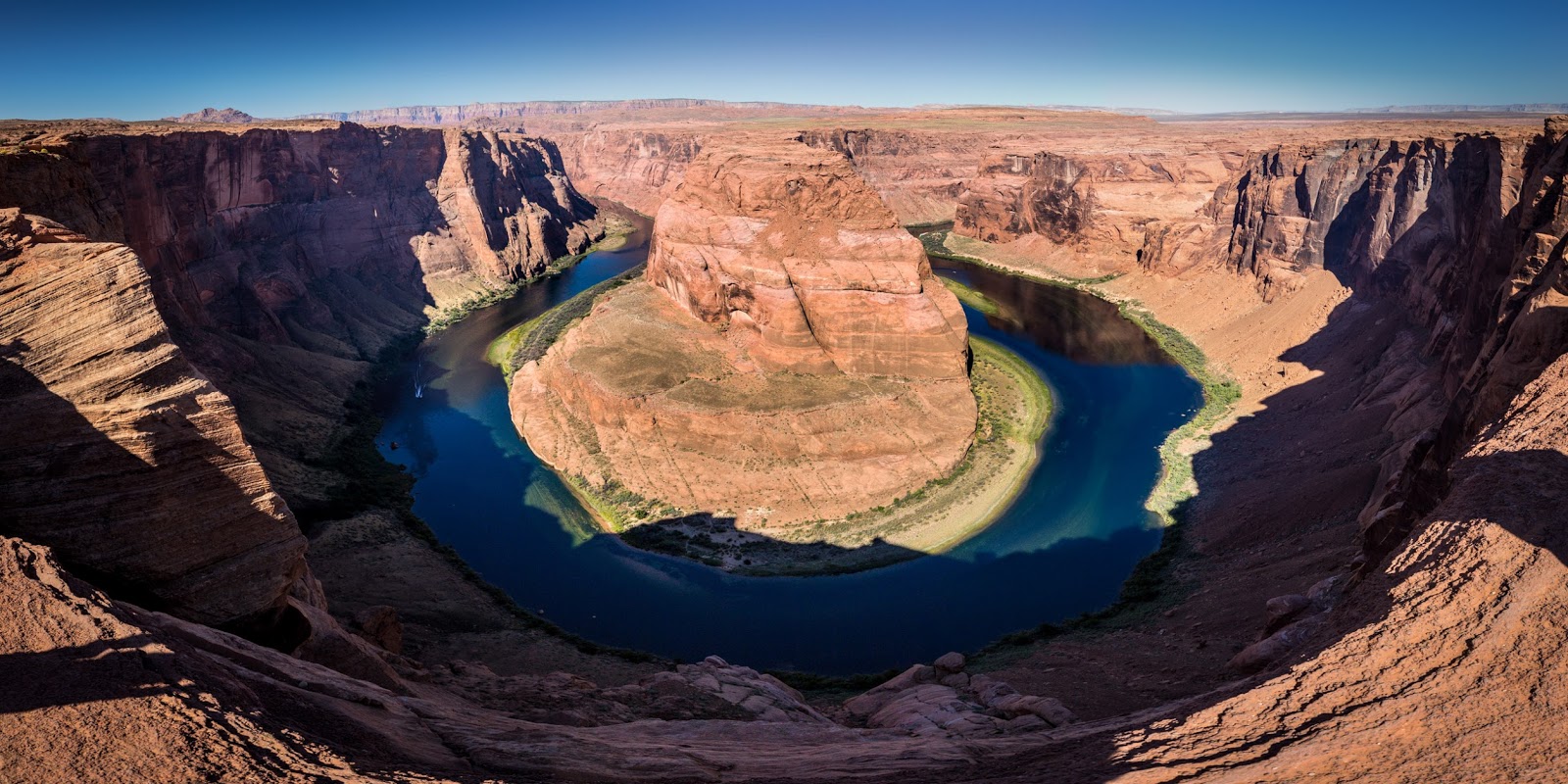 But, oh, what a mob of tourists to contend with!  This seemingly wild-looking place is literally just a couple miles from a Wal-Mart at the south end of Page.  At the rate that town is growing, who knows how long it will be before this place sits between strip malls and big box stores. 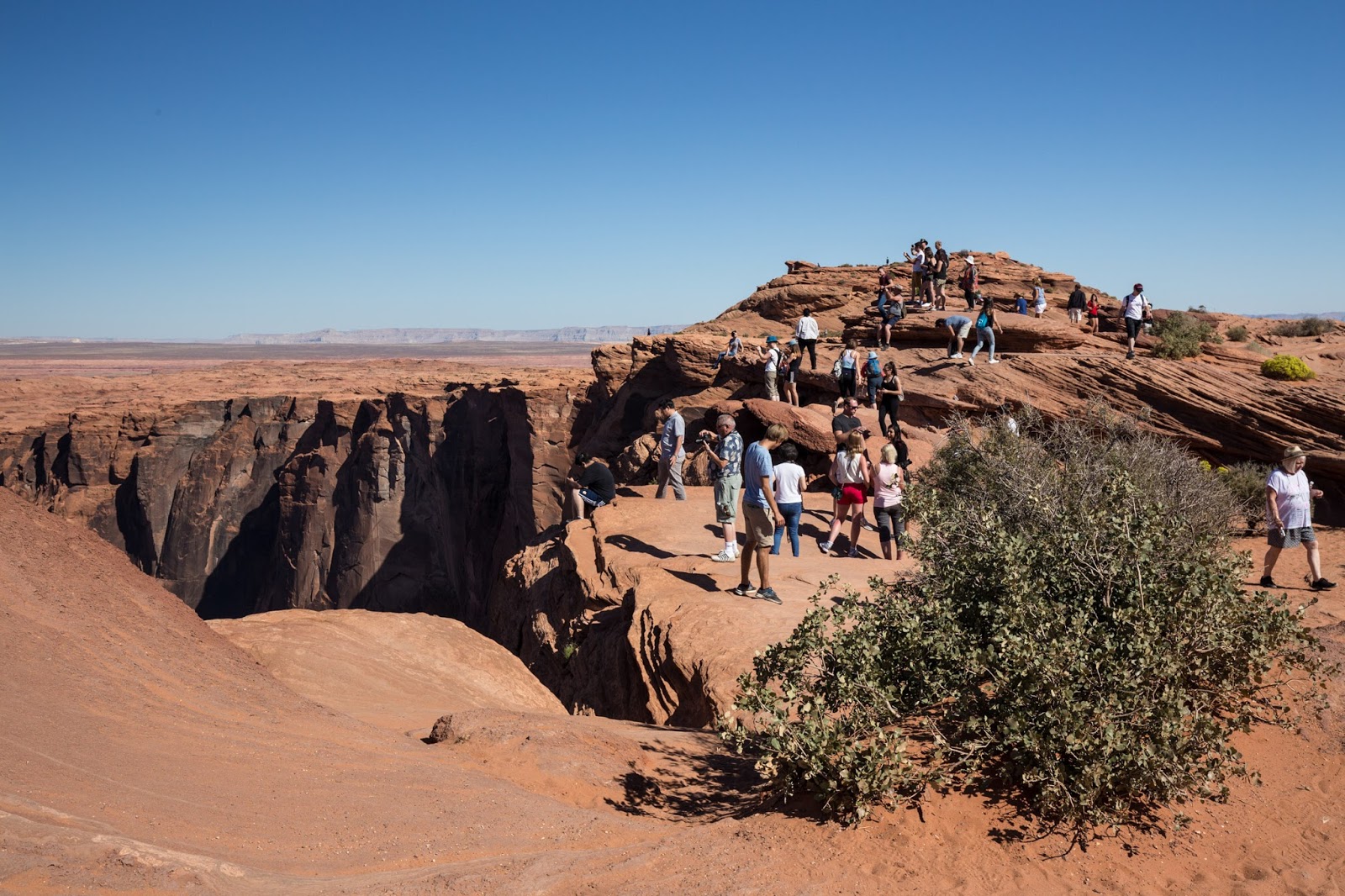 Before leaving town, I stopped south of the Lake Powell dam to snap a few photos of the dam and river. 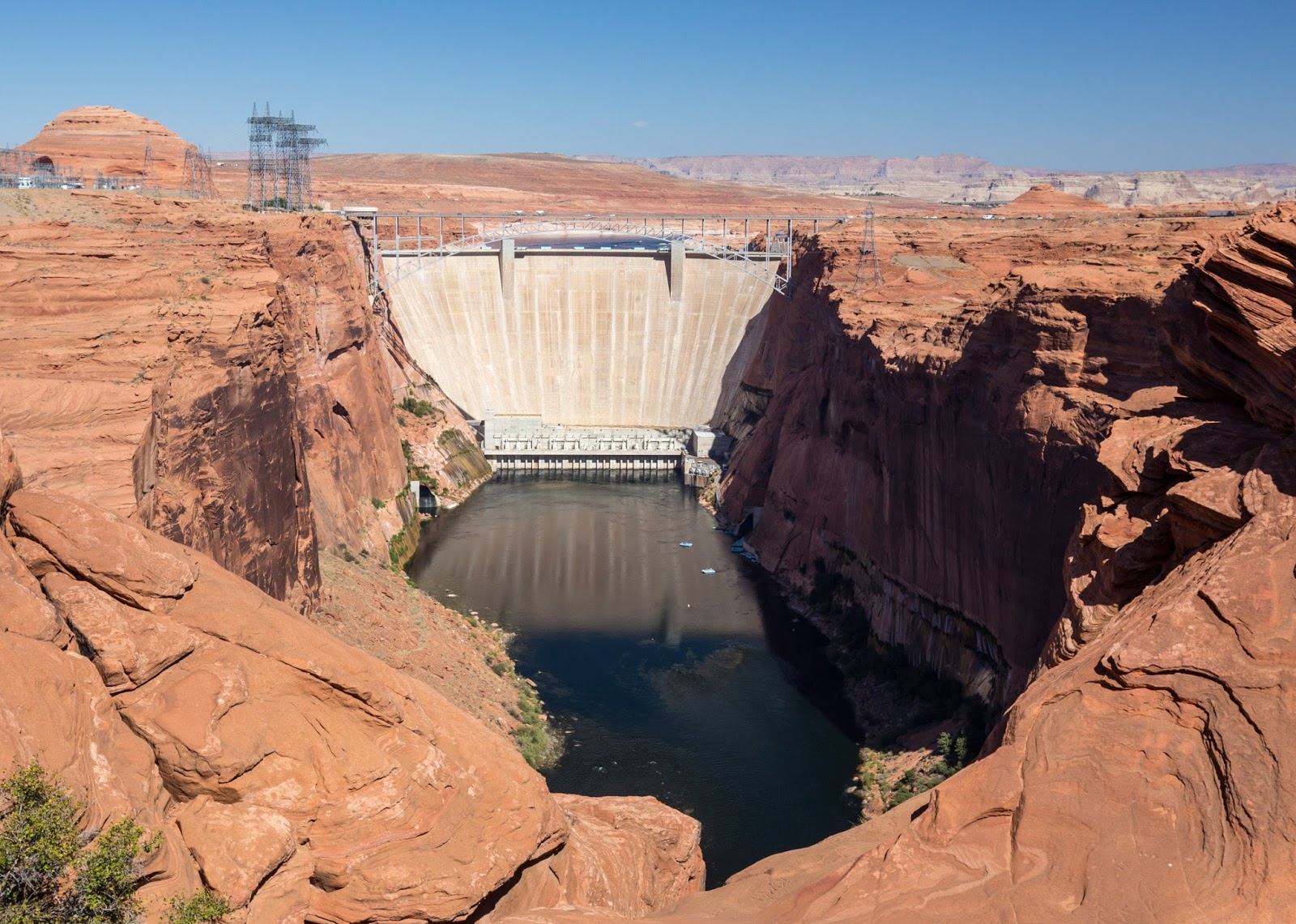 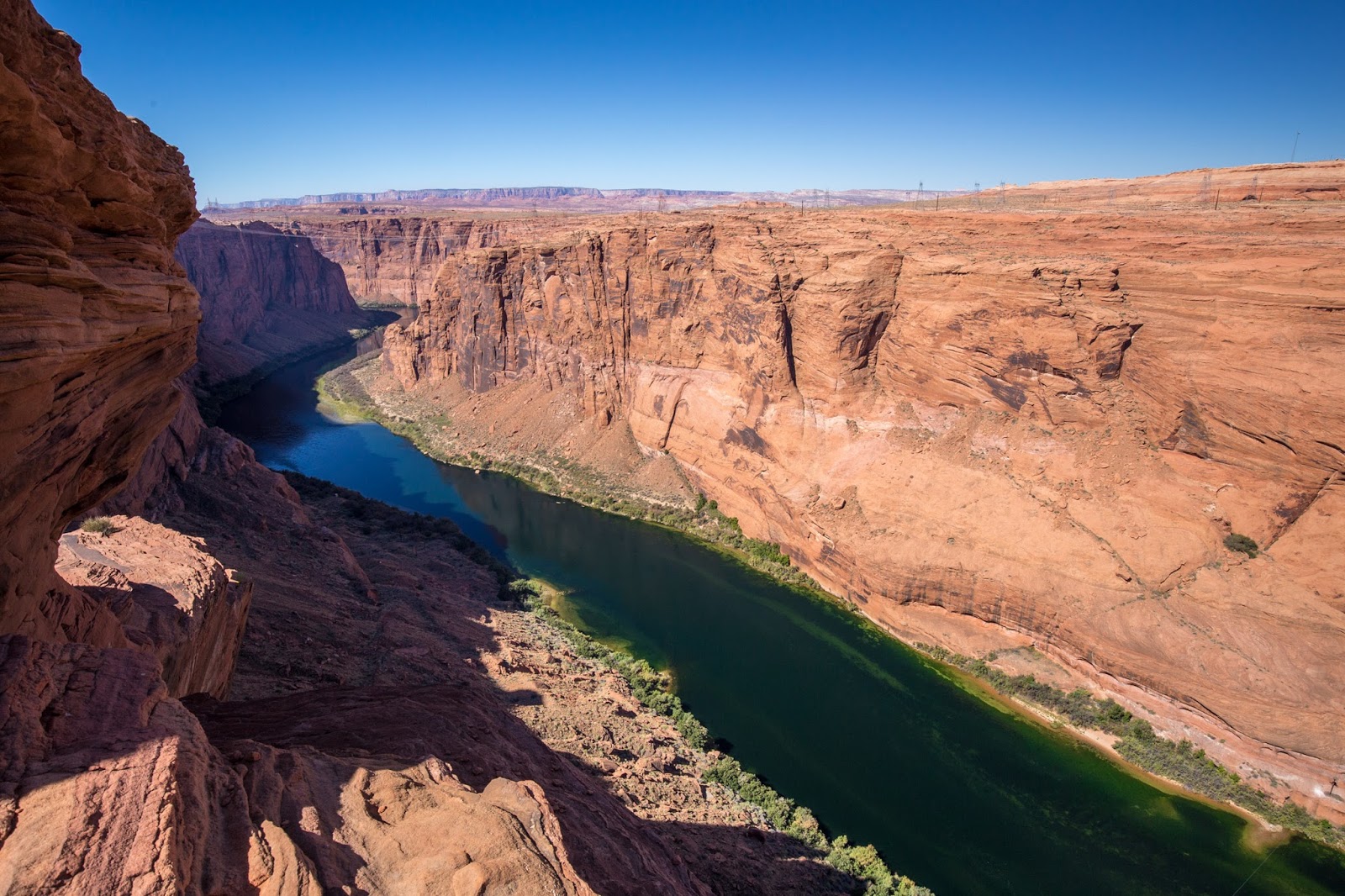 On the return trip back to Bryce, since it hadn't rained in over a week, I decided to take the "shortcut" up the 46-mile unpaved Cottonwood road through the southern end of Grand Staircase-Escalante National Monument.  While not nearly as magnificent as the northern Burr Trail or Highway 12 areas of the monument, the drive was still quite spectacular in a few spots, particularly this viewpoint heading down towards Kodachrome State Park on the northern end of the drive:

These short trips made me realize that even spending the entire summer in southern Utah is just not enough time to explore all the pretty places it has to offer.  One could literally spend an entire lifetime here and still never run out of stunning places to photograph!