My final month at Bryce Canyon National Park (September) was a flurry of new job experiences and a wild ride of unpredictable weather as well.

It had been a lifelong dream of mine to work at a National Park, and my job as a Volunteer Interpretive Ranger fulfilled that dream to its fullest.  My daily duties included working a few hours at the Visitor Center Information Desk, a few hours of project/program time (researching and/or presenting ranger programs), and "roving" out in the park (walking trails like these and assisting visitors). 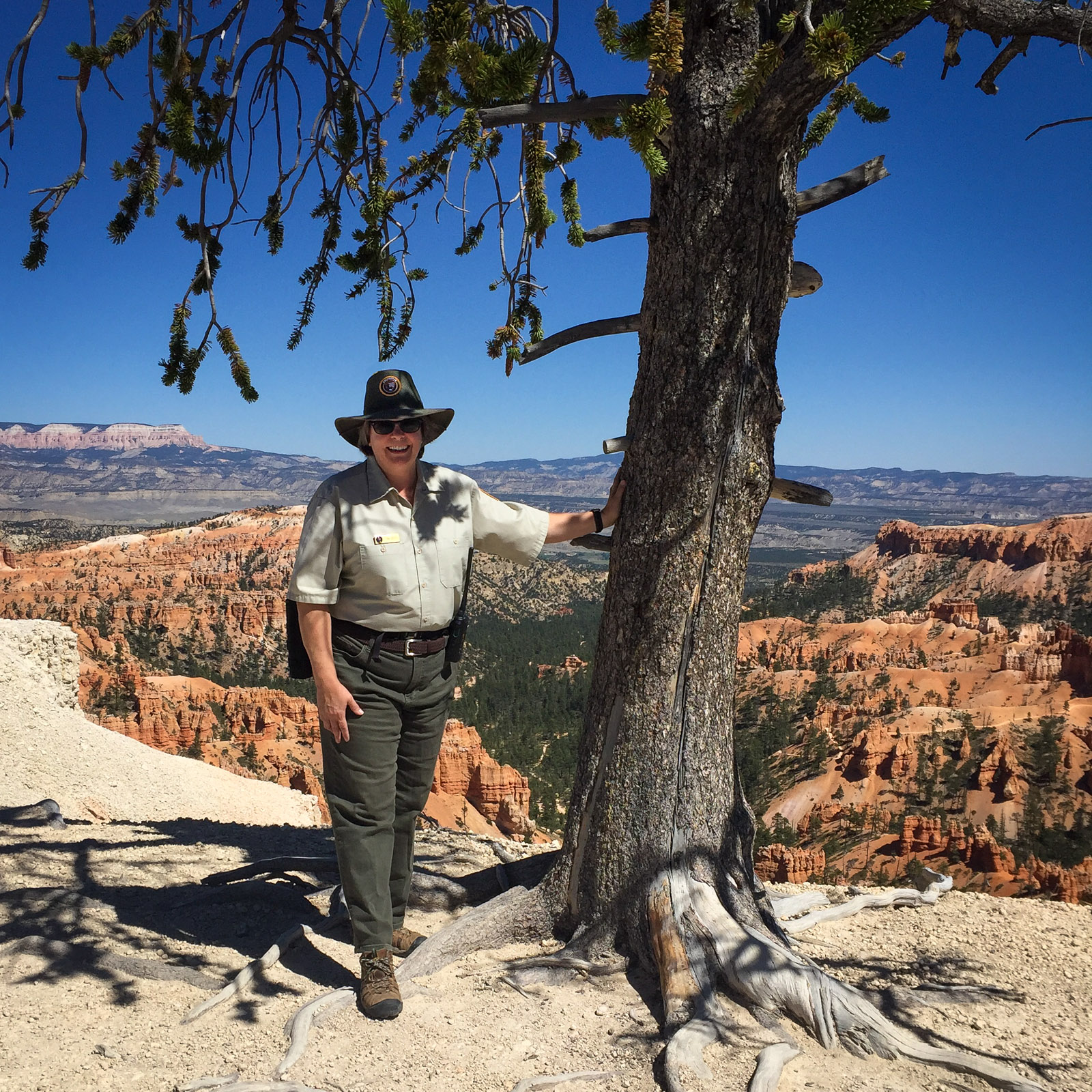 Every single day, I got to meet and talk to hundreds of visitors from around the world-- from Canada and Mexico, to China, Japan, Germany, Austria, France, Switzerland, Spain, Israel, South Africa, Russia, Norway, Denmark, Australia, New Zealand, and India.  They traveled from around the globe to this special place in a remote corner of southern Utah.

I also got to work with a diverse and incredibly talented group of interpretive rangers-- each bringing deep expertise of their specific life's work from geology, biology, forestry, and astronomy, to music, theatre, photography, painting, and architecture.

If I could sum up the season into one word, it was "intense."

Of course, part of that was of my own making.  A week into my job, my supervisor asked if I might want to develop and present a few ranger programs.  Wow, how could I say "no" to such an opportunity?

Seeing that no other rangers had yet focused on the National Parks Centennial, I decided to focus my programs on what Bryce was like 100 years ago (in 1916).

While Bryce would not become a national park until 1928, the year 1916 was still very monumental.  Until then, hardly anyone knew of Bryce's rare hoodoos (except for a few locals).  That all changed in 1916 when the first road to the park was built, and the first photographs and articles were published in prominent national magazines.  From then on, Bryce was now "on the map" and a new natural wonder of the world to be seen!

After a month of research and preparation, I was finally ready to launch my programs in early September.  Reality set in when I saw them listed in the park's weekly ranger program schedule-- no turning back now! 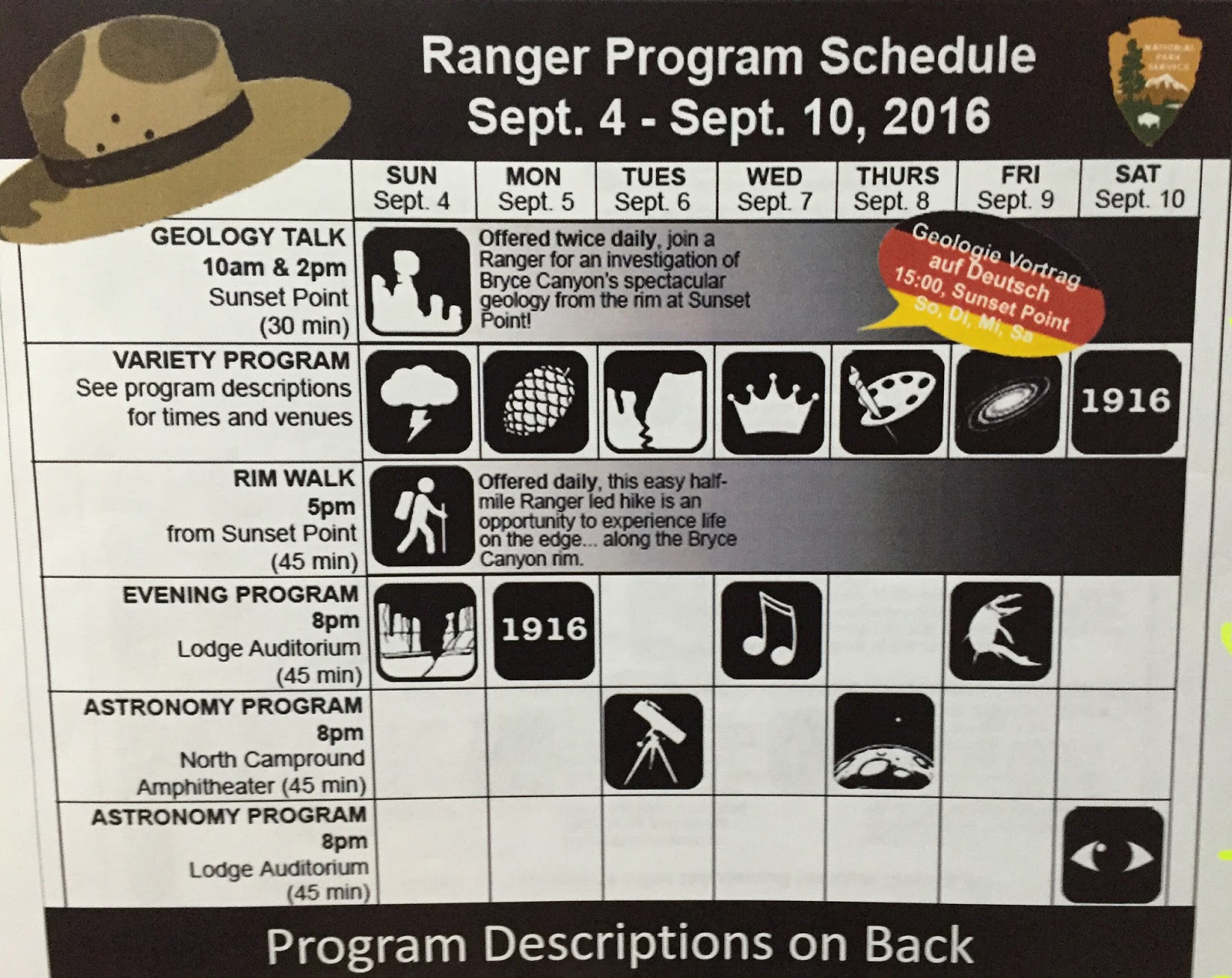 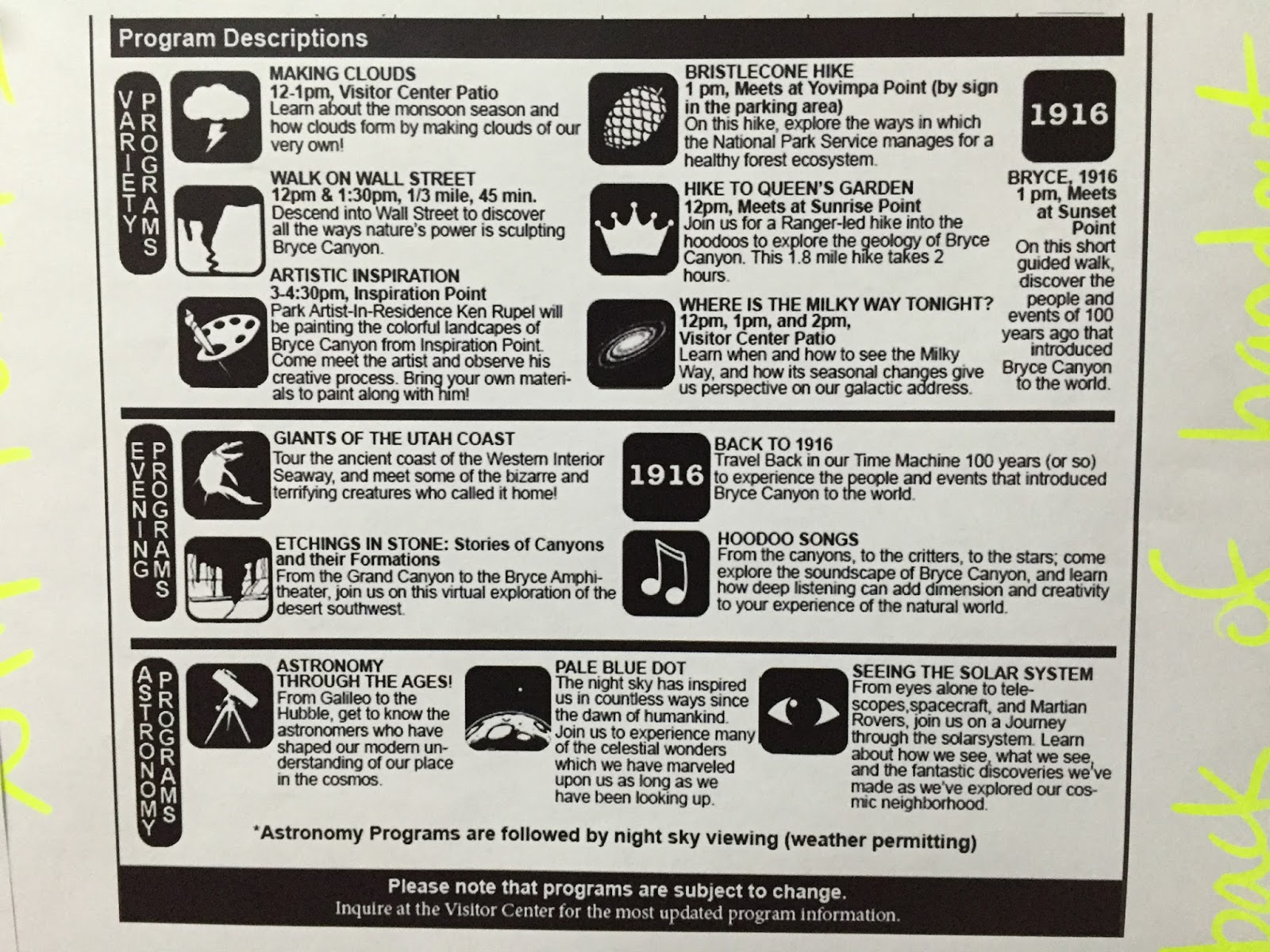 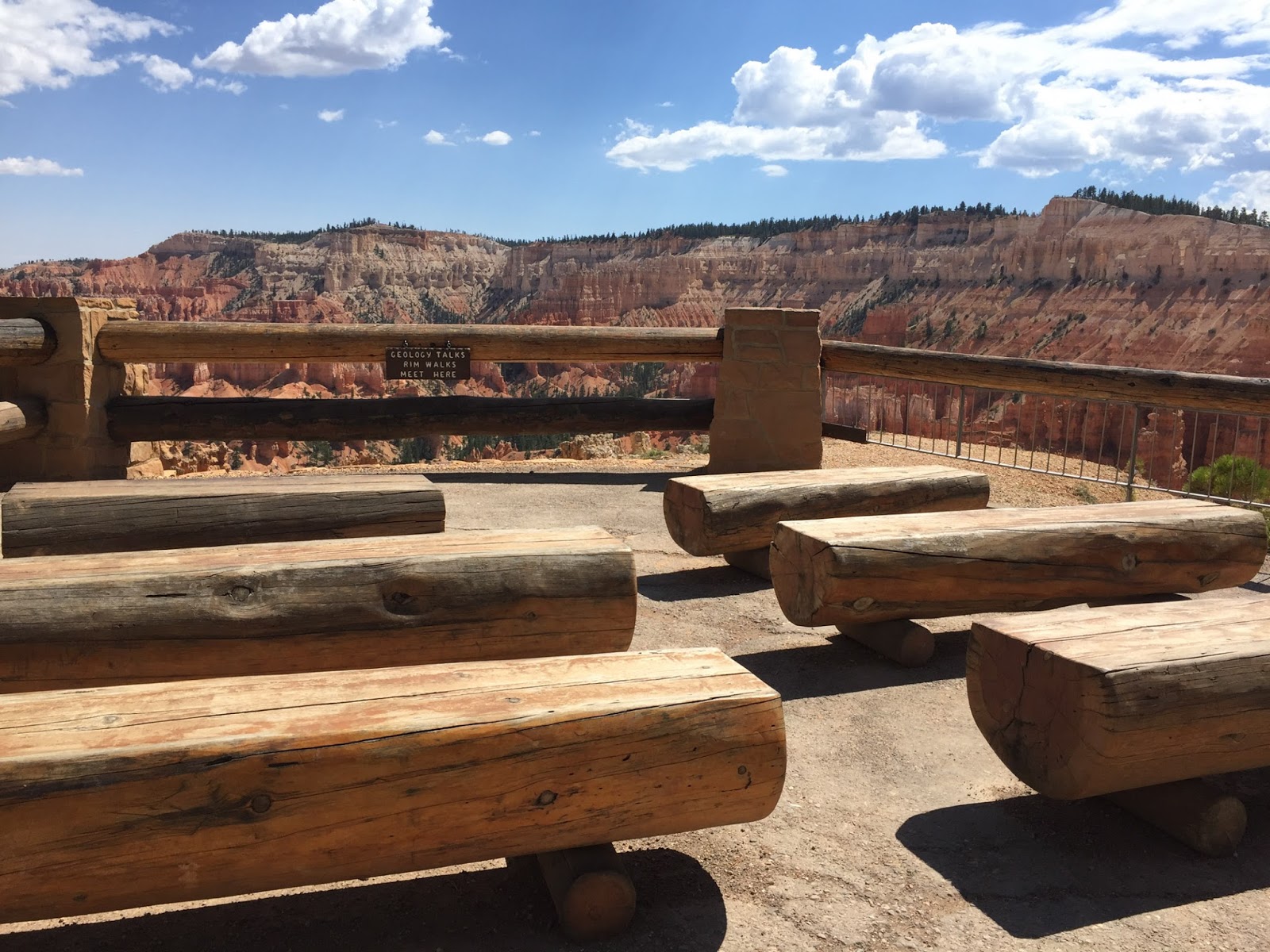 Here's a fellow volunteer, Joe, giving his program from there: 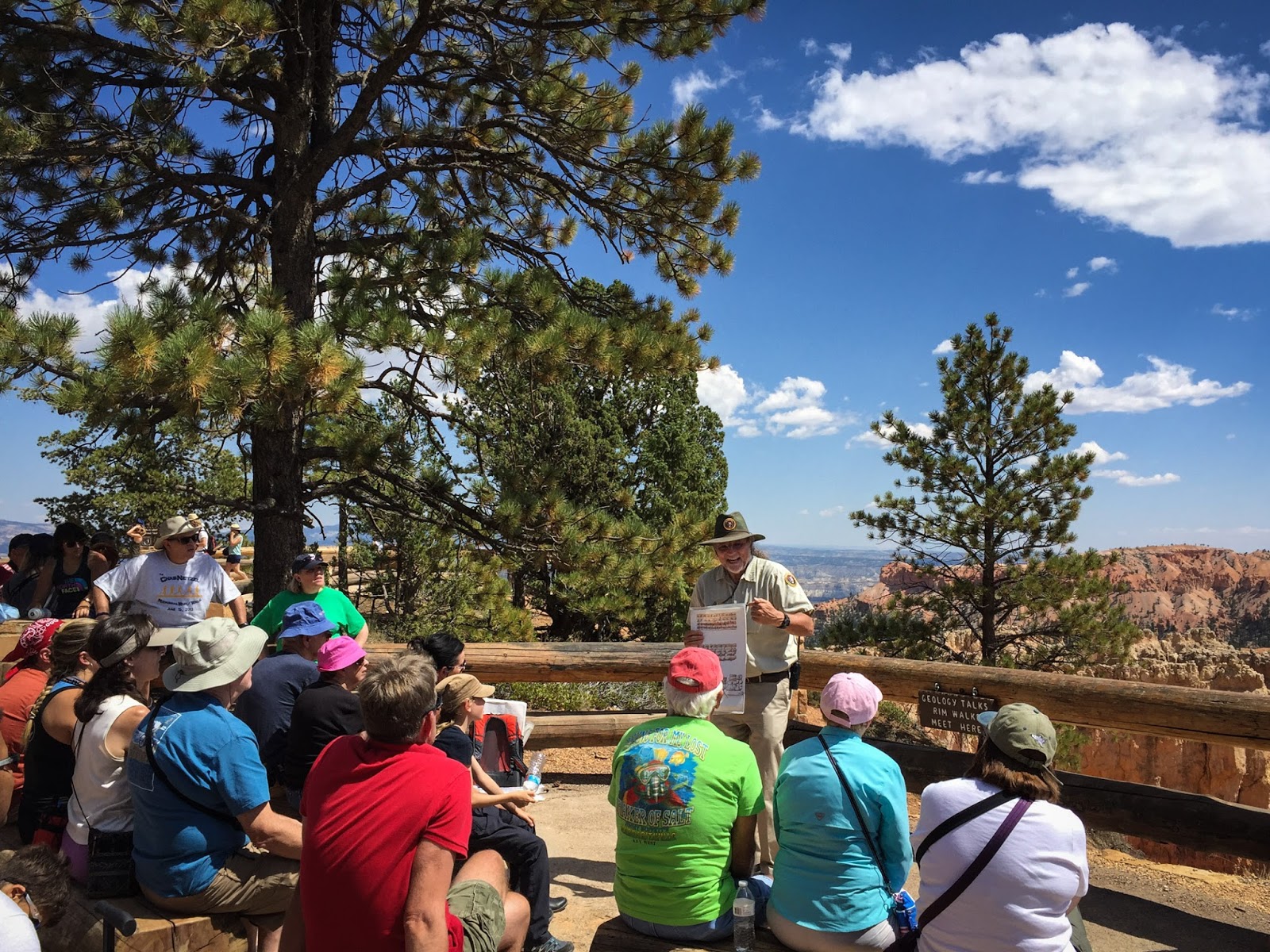 There were 2 possible venues for evening ranger programs.  The outdoor theater at the campground (where Ranger Don is shown giving his astronomy program): 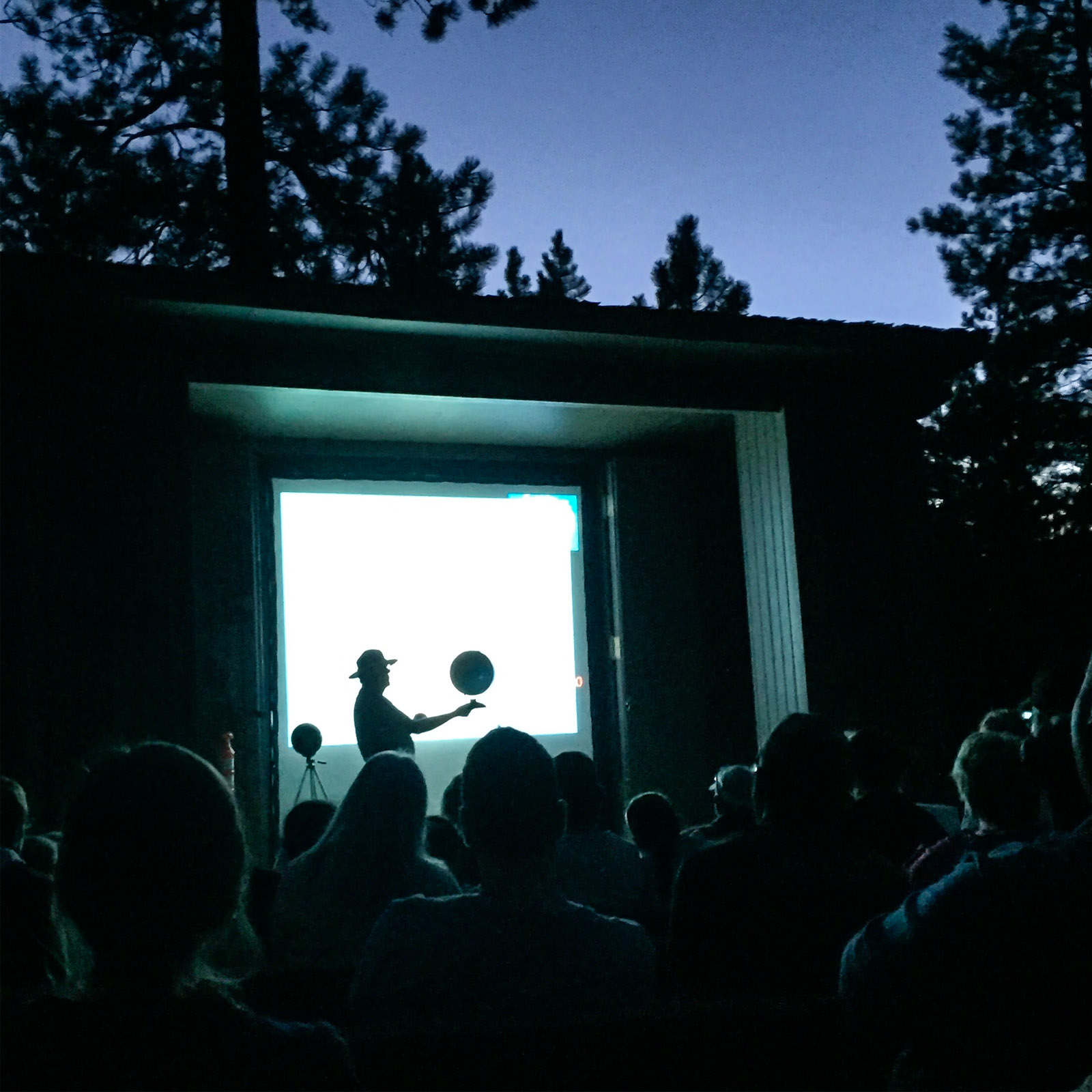 and the indoor auditorium at the historic Bryce Lodge.  As my evening program was highly centered around a slideshow/video presentation,  I felt the indoor Lodge would be less problematic to the mood swings of Utah high-elevation September weather.

So, here was my lovely venue (photos taken during my afternoon rehearsal time): 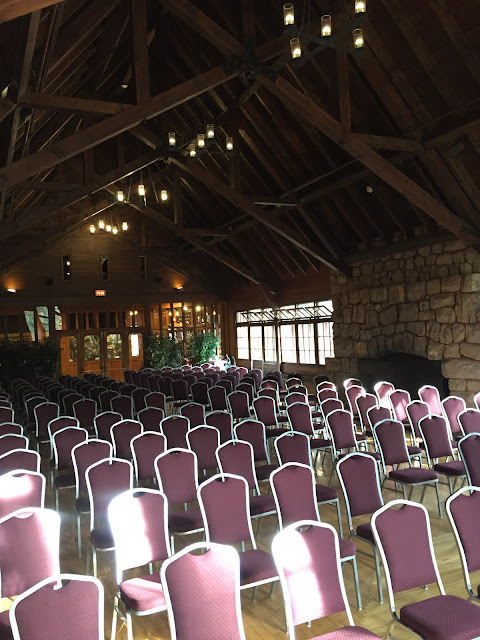 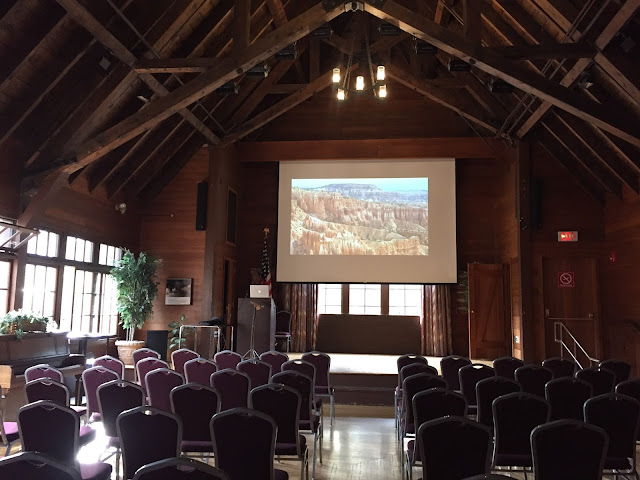 While preparing these ranger programs was stressful, presenting them was an extreme adrenaline rush and always thrilled me to see visitors "light up" and get more excited about Bryce Canyon by the end of the program than they'd been at the start!  I always seemed to leave each venue "floating on air!"

Every day in September seemed to bring something new weather-wise.  One day while roving, I noticed dark storm clouds rolling in fast over the canyon rim--- 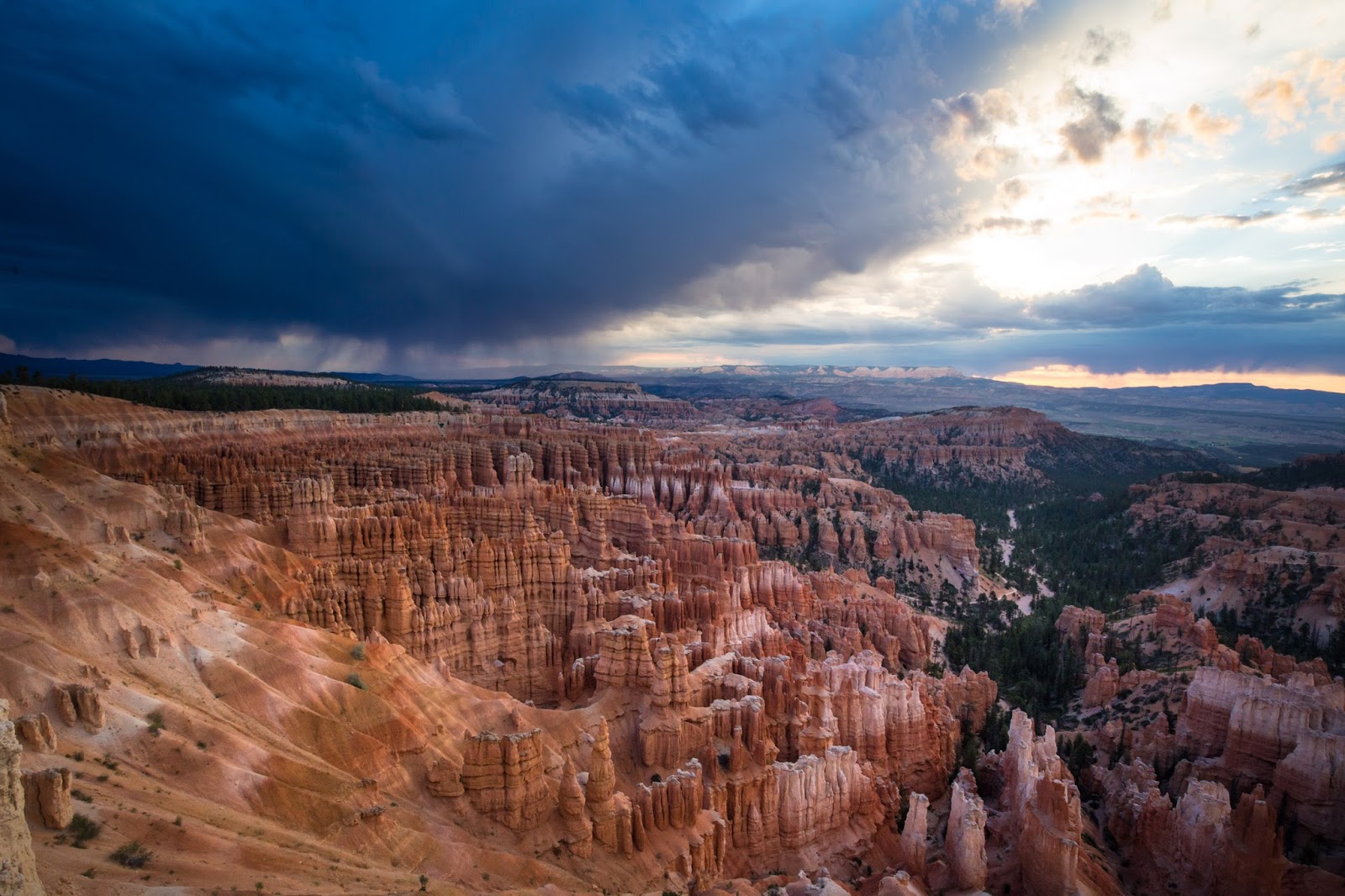 Within 5 minutes, it was pouring rain with thunder and lightning seemingly too close for comfort.  I ran back along the trail to herd visitors away from the rim towards a somewhat safer (and dryer) shuttle bus shelter.  As luck would have it, just as we got to the shelter a shuttle bus arrived and we were all able to get inside the bus. Not one minute later, a giant hail storm began pelting the roof!

By the time we arrived back to the Visitor Center, the storm had now passed, and hail covered the ground! 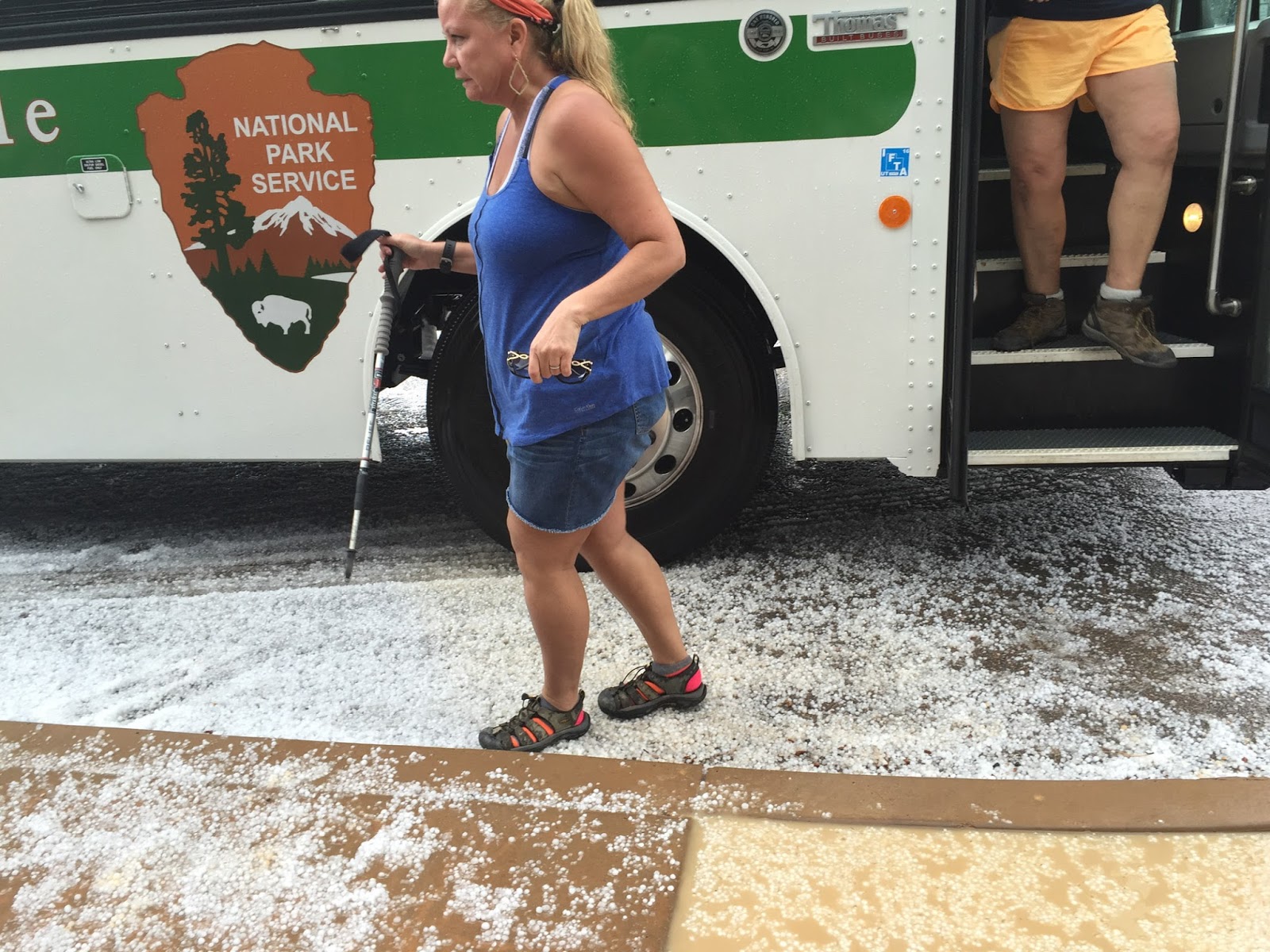 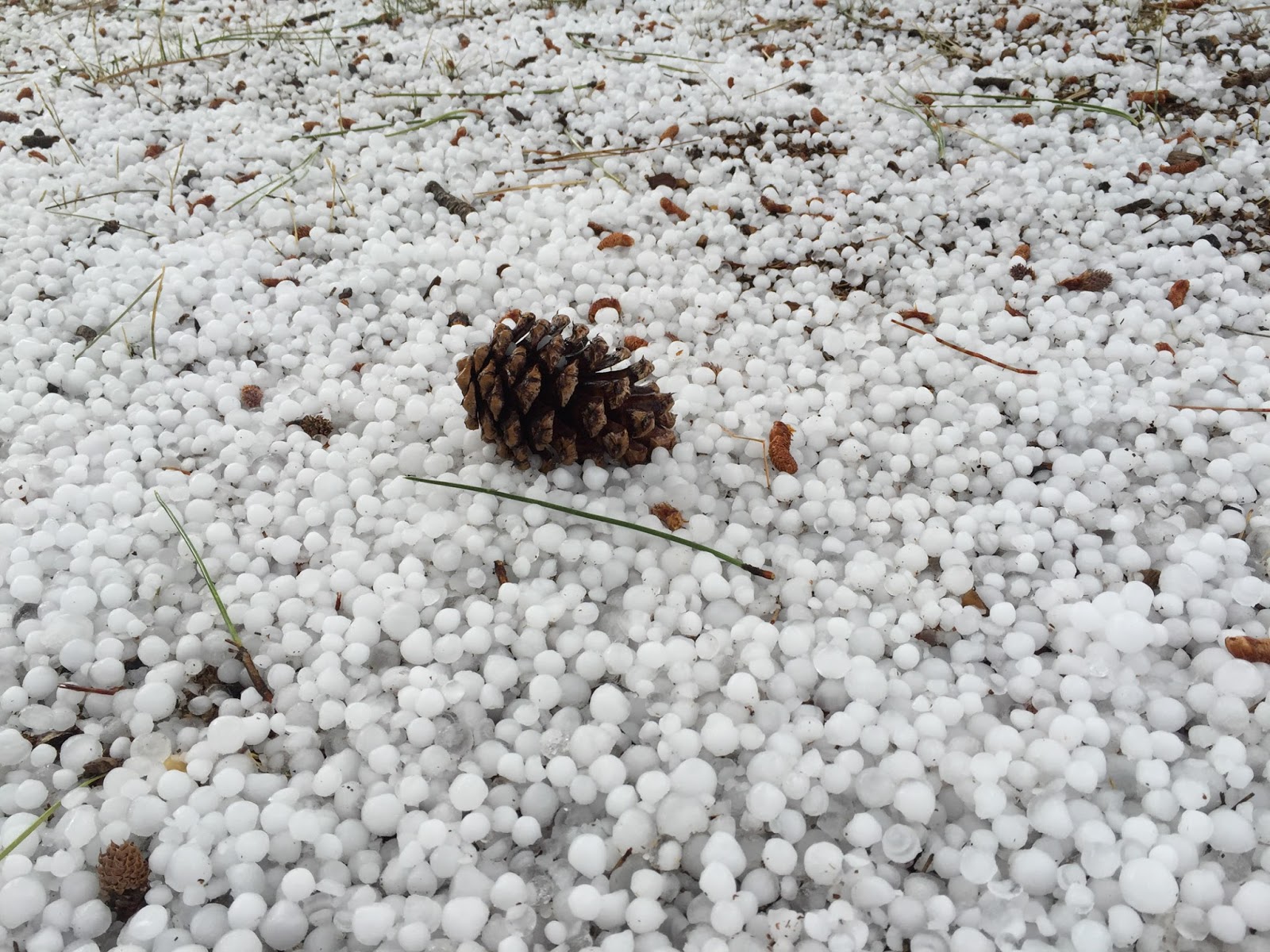 About 30 minutes later, ground fog now rolled across the meadow in front of the Visitor Center-- 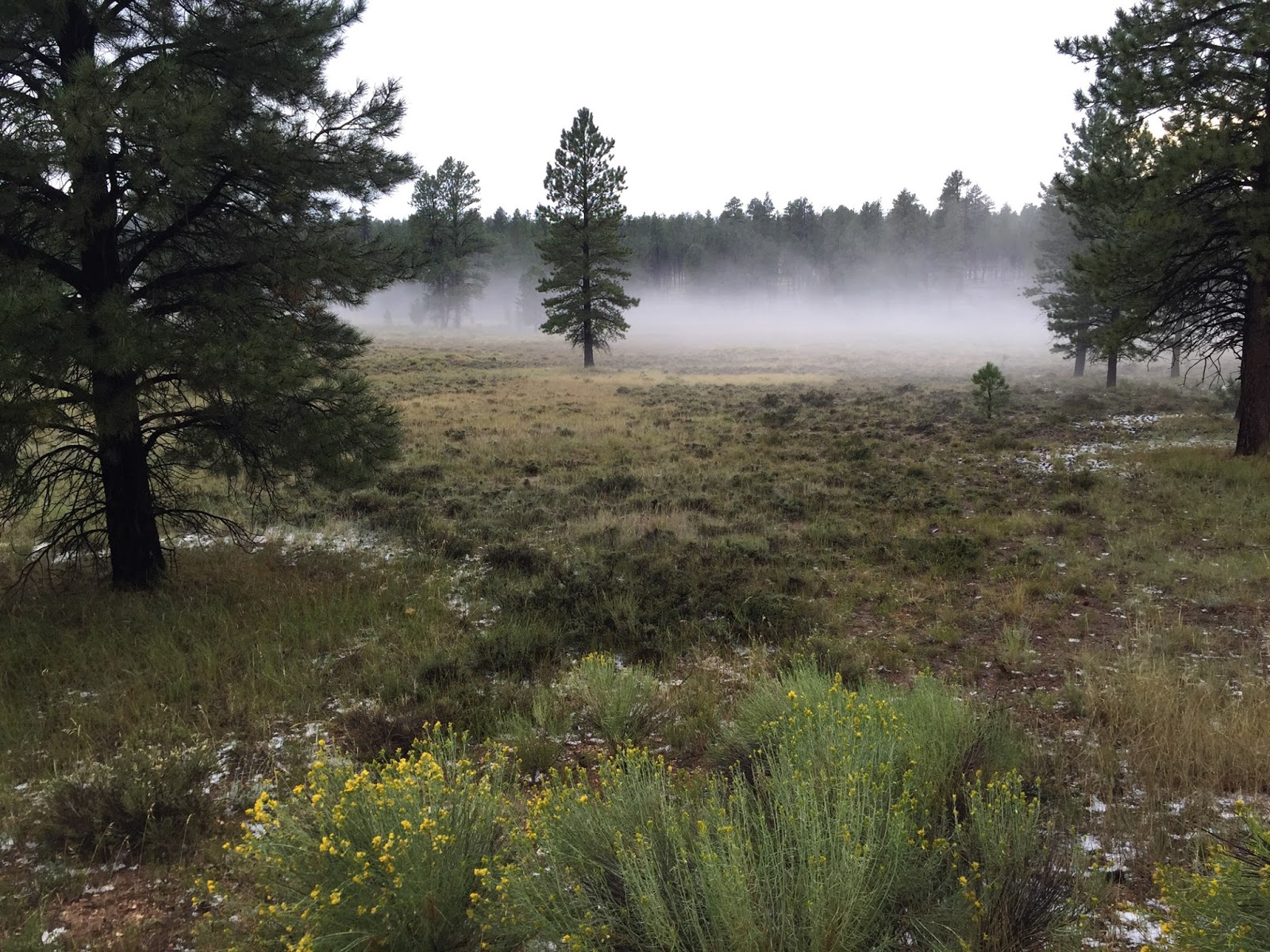 I thought for sure that would be my only opportunity to see fog at Bryce Canyon, but less than a week later, an even denser fog draped the entire plateau.  Remember, my afternoon ranger venue above?  It now looked like this! 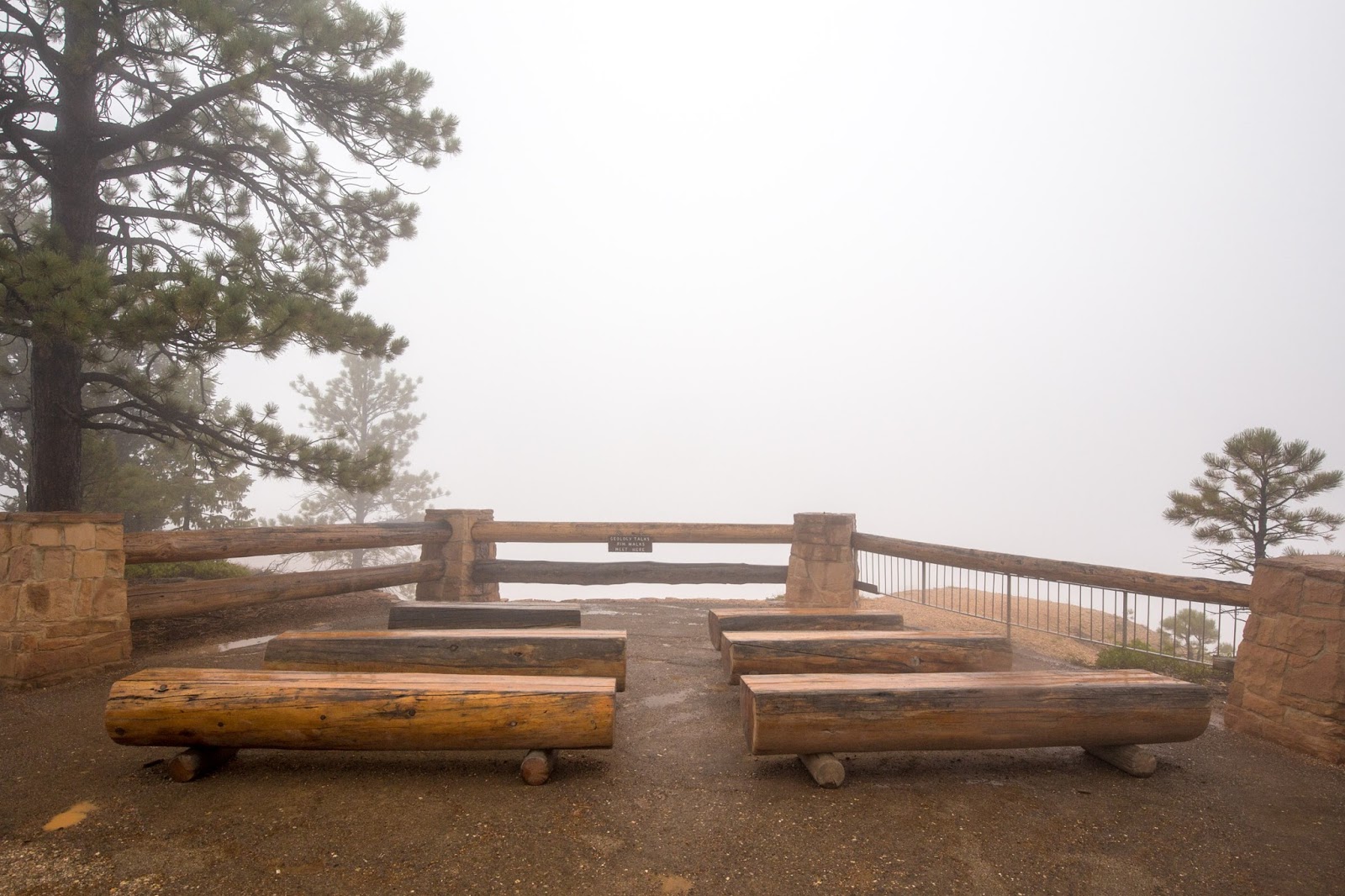 I thought for sure that all the popular viewpoints would be equally deserted on such a day, but nope!  Sunset Point still had a few visitors--- 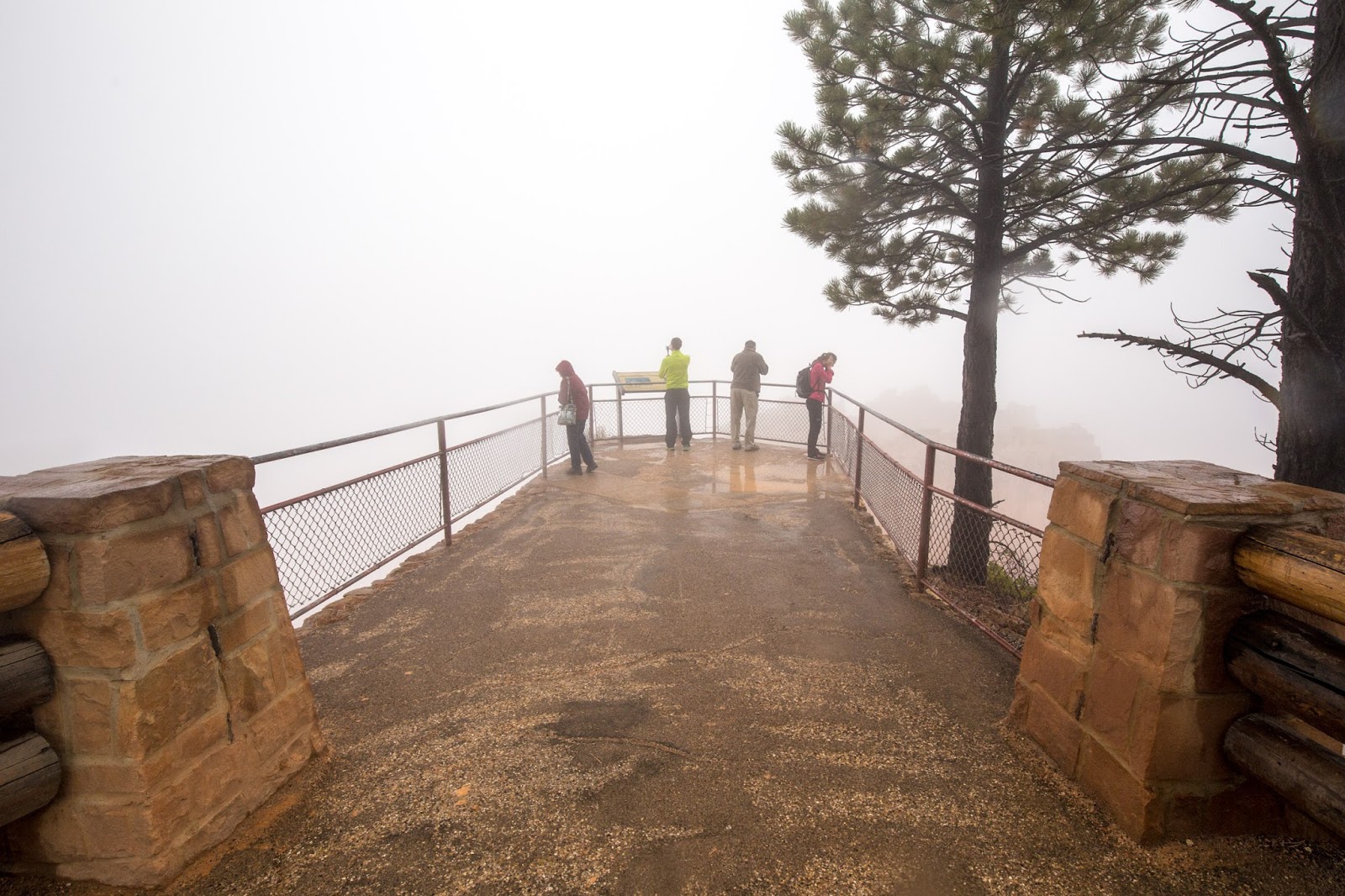 There were still a few hikers bravely trying to navigate the muddy clay along the Navajo Trail, but waiting a few more minutes, I was able to get this rare daytime "people-free" shot (impossible on a clear sunny day!). 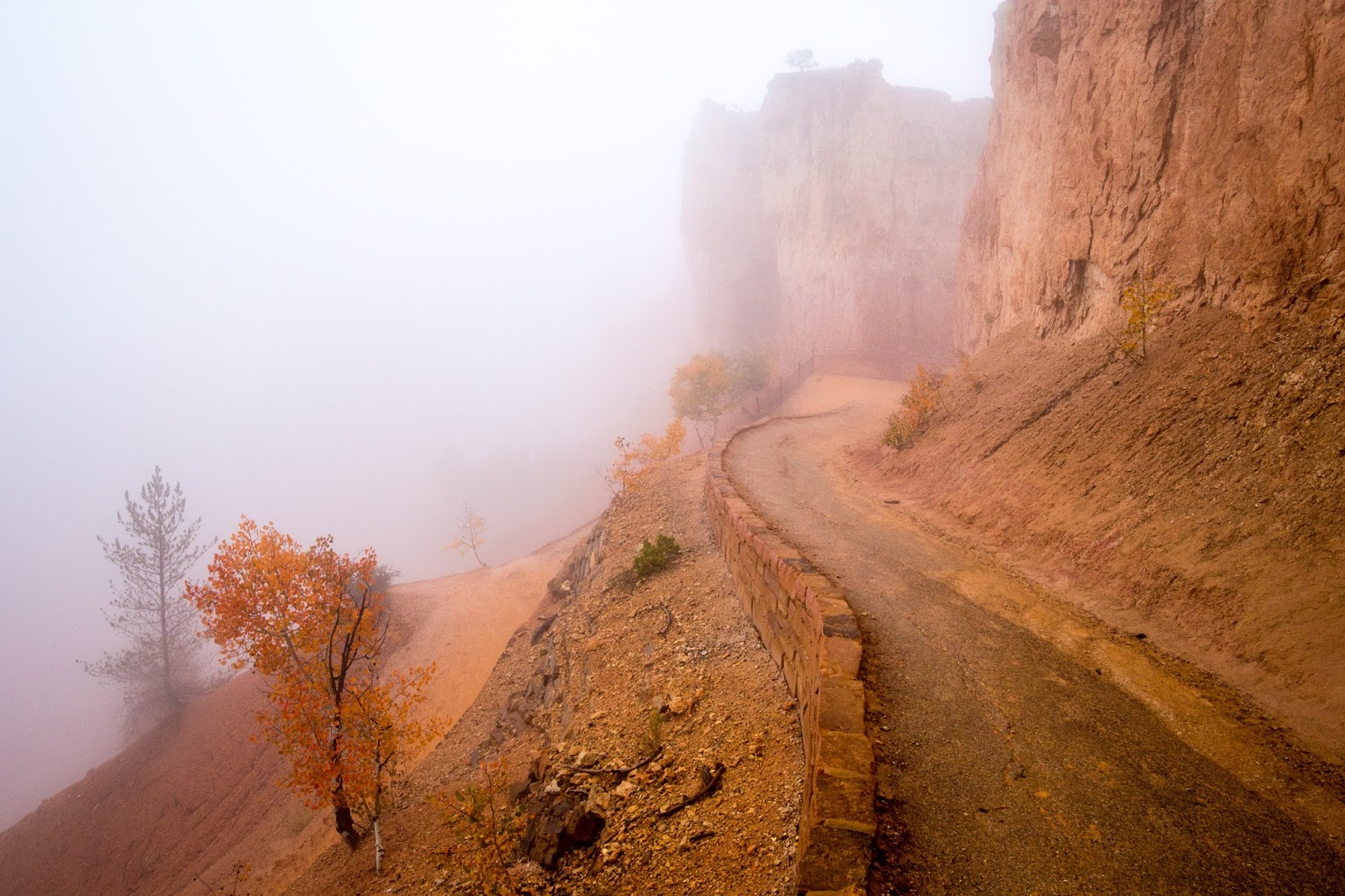 Up at Fairyland, I was the only car in the parking lot and had the overlook all to myself: 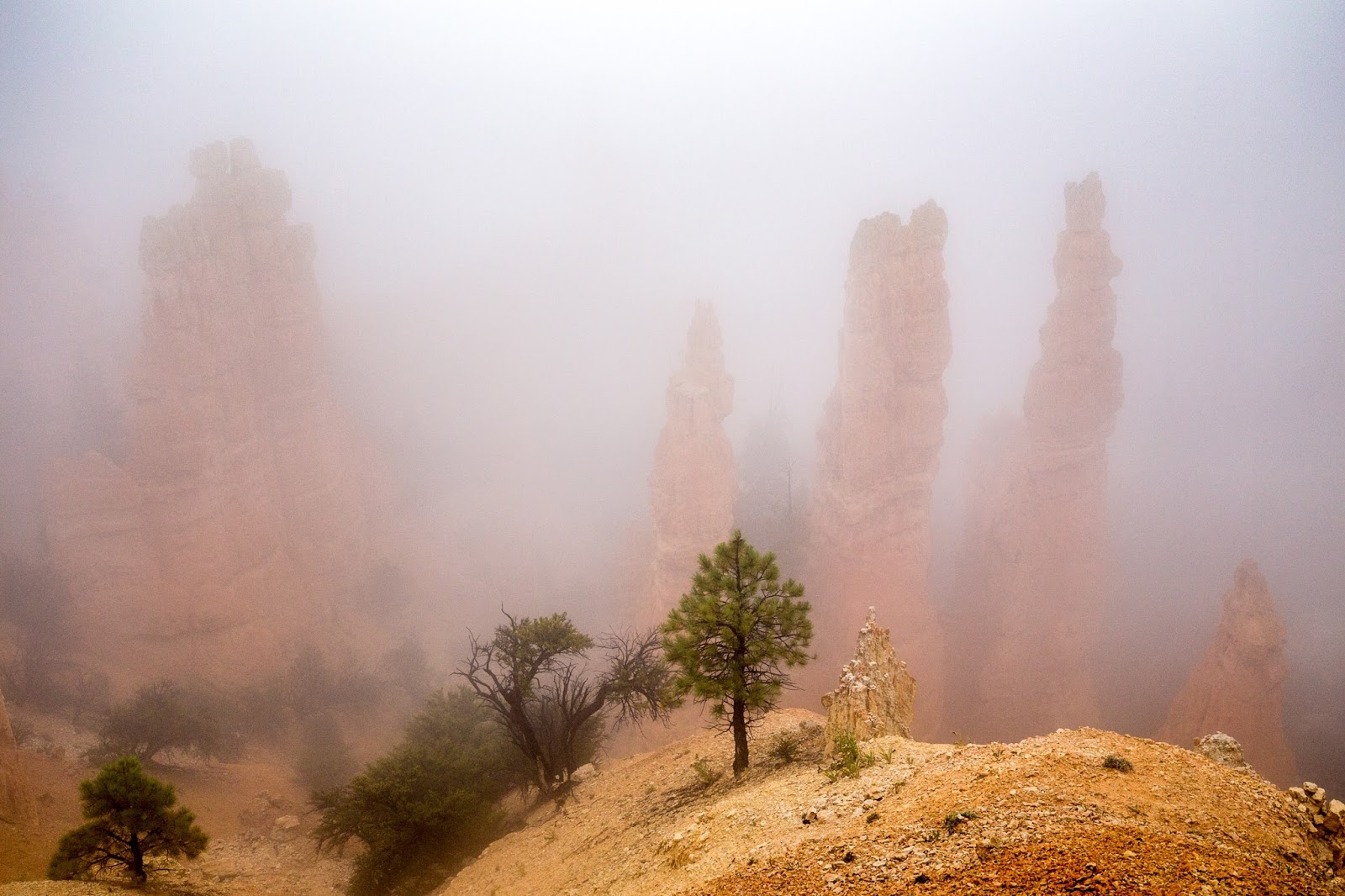 What a fun day to live in the park!

By the last week of September, I knew my timing had been perfect to end my engagement.  I looked outside my RV window one night to see it snowing heavily on my lawn chair! 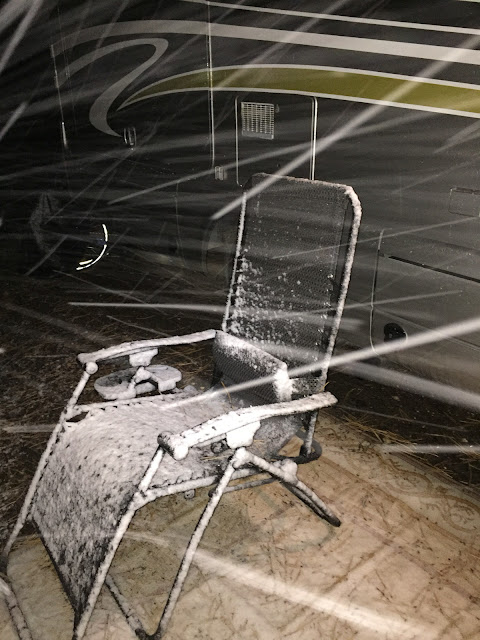 A sure sign that it's time to move to lower elevations!  But the morning snow sure was pretty to look at-- 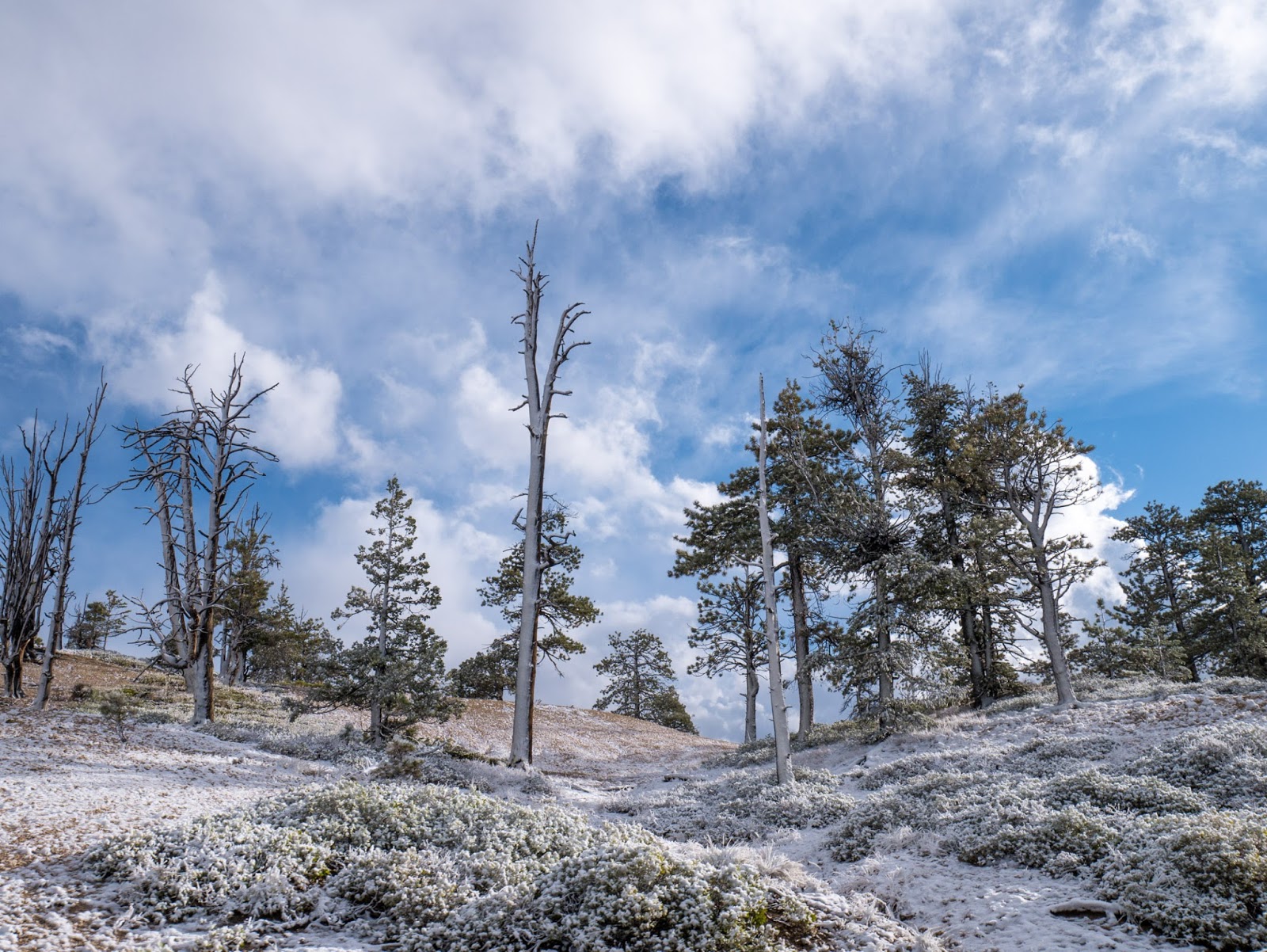 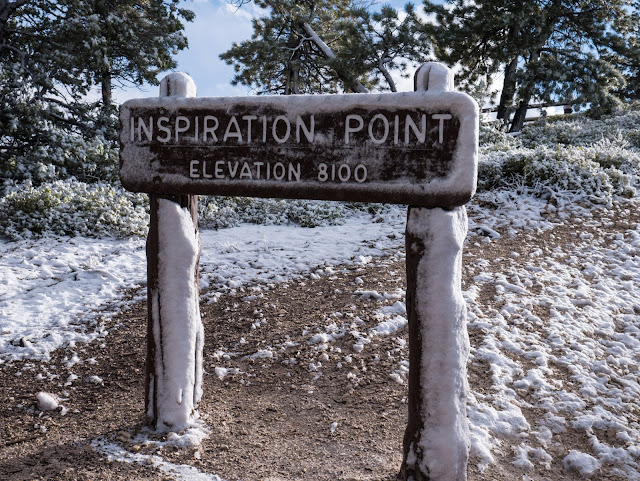 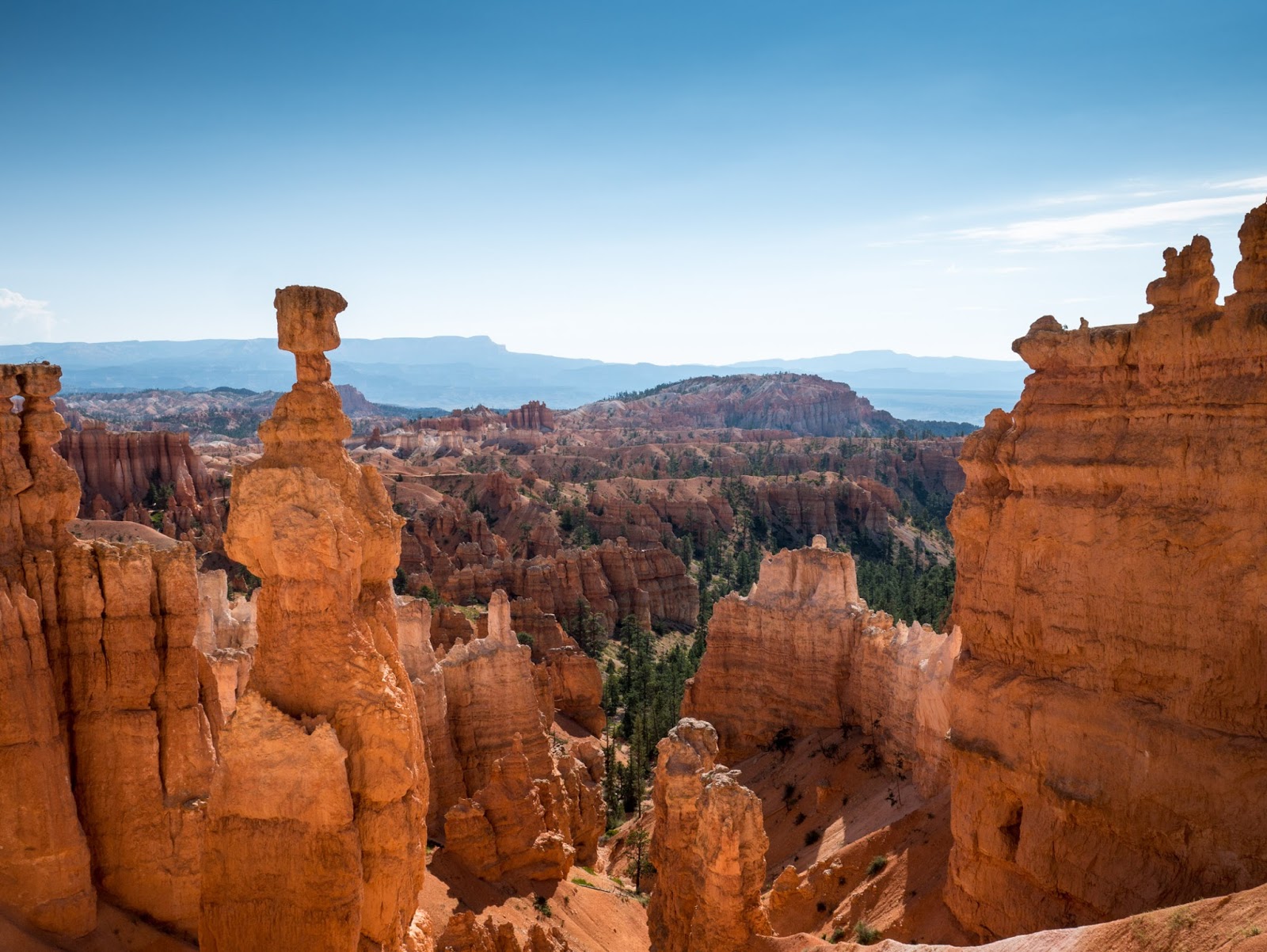 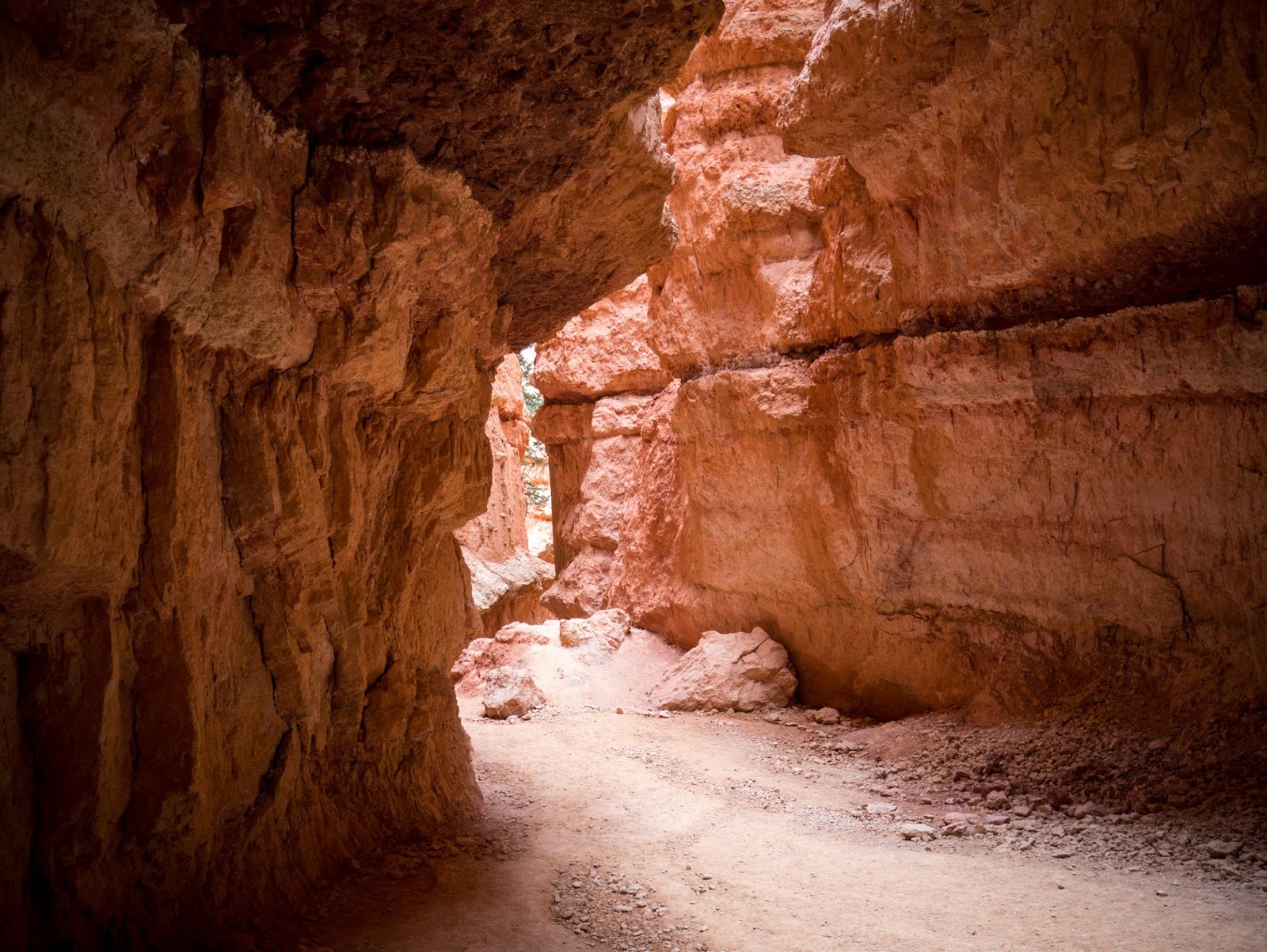 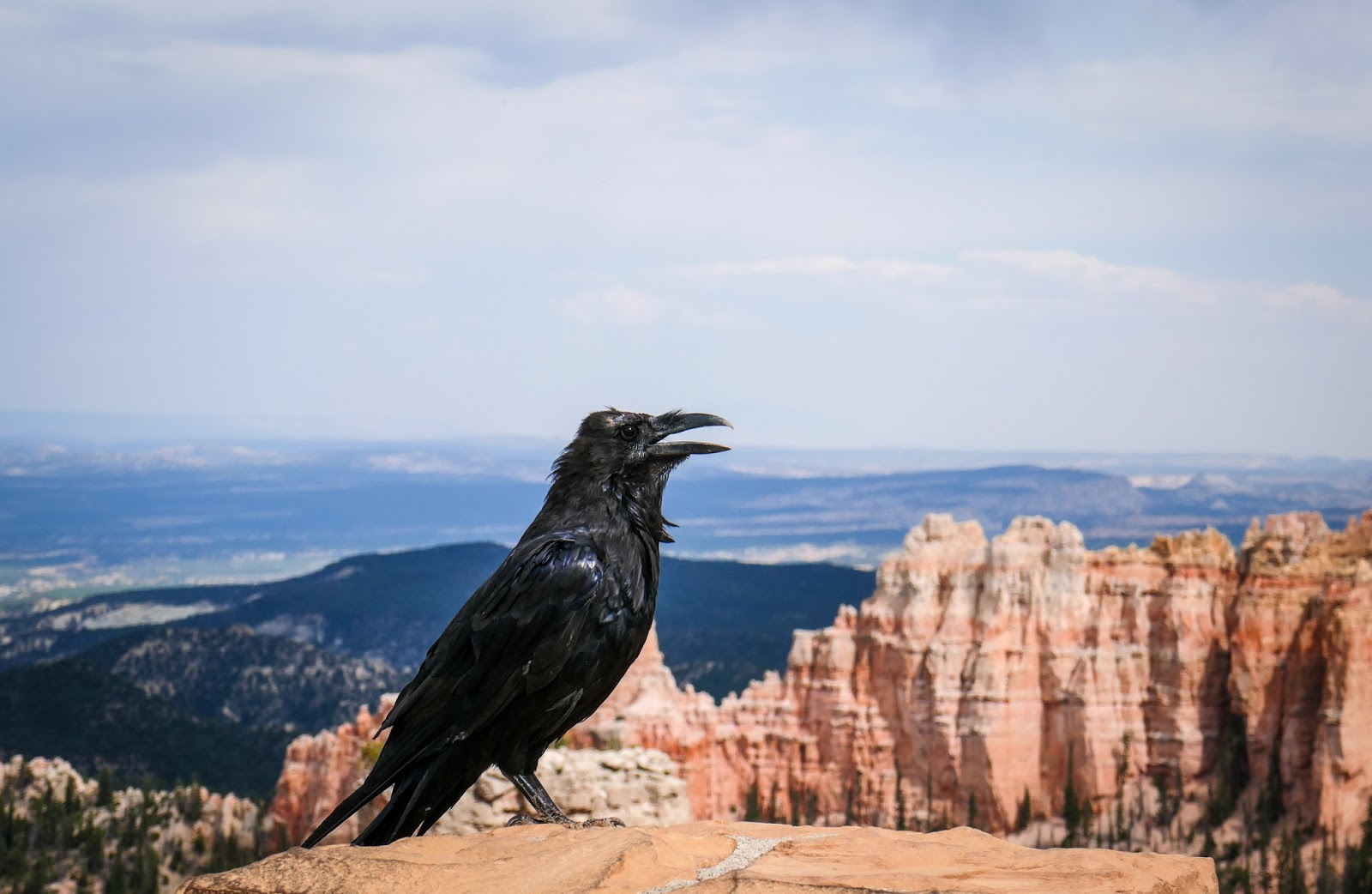 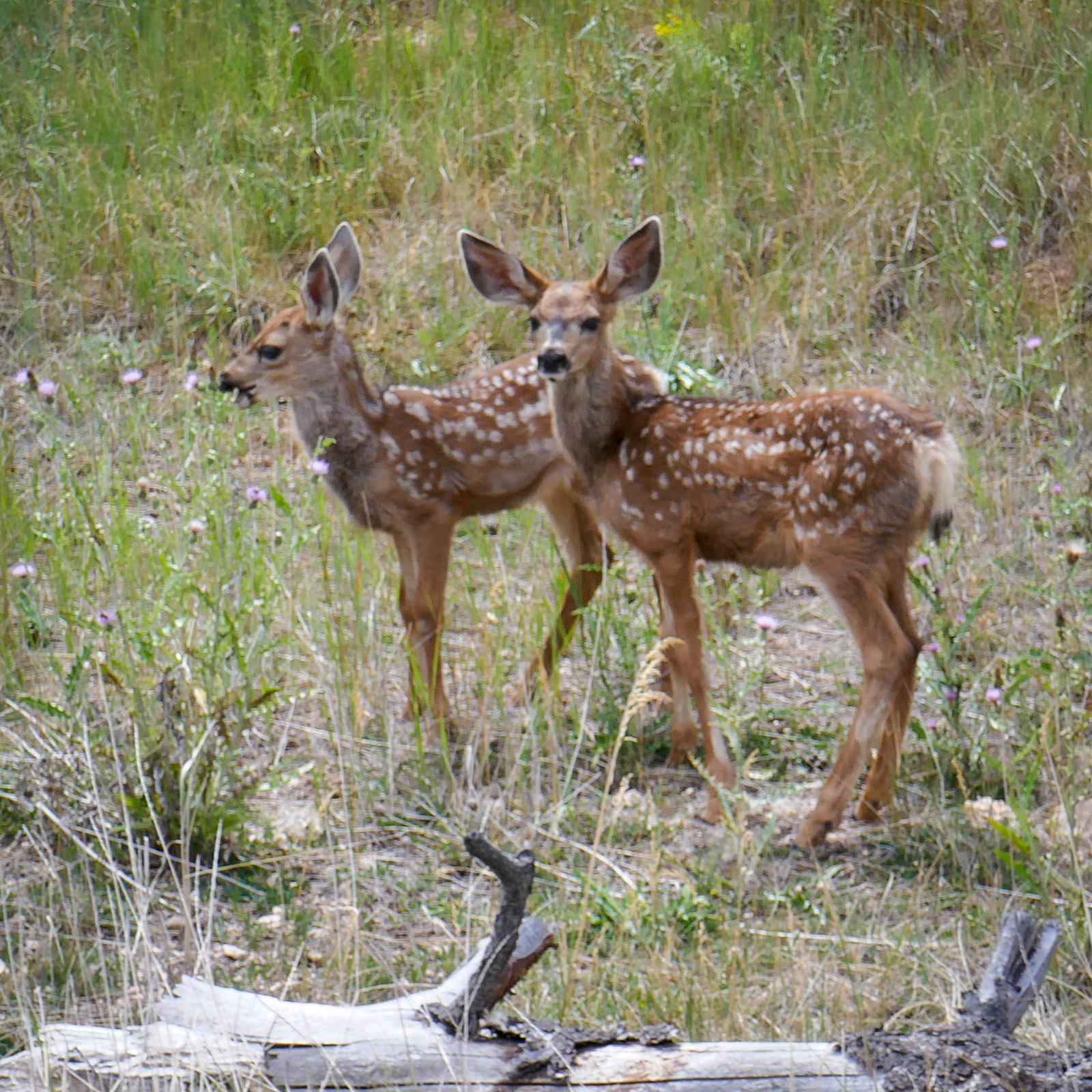