Having a National Park All to Yourself

Attendance at national parks for its 2016 centennial year is up and well on-track to break last year's record of over 307 million (Update: It did!).  Around 2 million of those people are visiting Bryce this year, most of them in the warmer summer months.

What does that kind of visitation look like for a tiny park with a single access road?  Well, this is not an uncommon summertime sight at the start of the ultra-popular Navajo trail.

Is it ever possible to have a trail such as this to one's self? 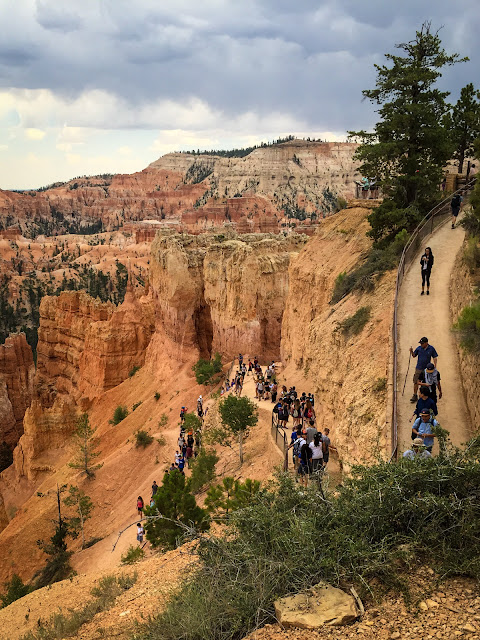 All these visitors not only stress natural resources to their limits, but stress the barebones funding and staff levels at these places as well.  At Bryce, the maintenance staff could never seem keep enough toilet paper stocked in the restrooms, or keep the trash cans from overflowing: 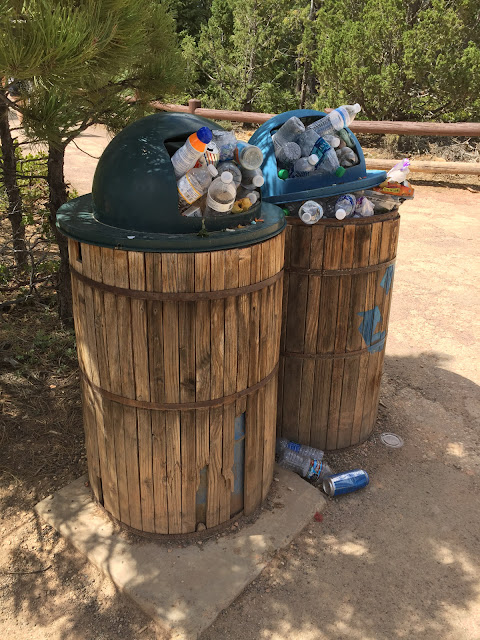 Nor was it uncommon to see a long line of cars waiting to get into the park.  Even the lure of free shuttle buses running every 10 minutes (and the large warning signs out by the free shuttle lot saying that all parking lots within the park are full) doesn't seem to dissuade people from waiting in long lines in the comforts of their beloved automobiles. 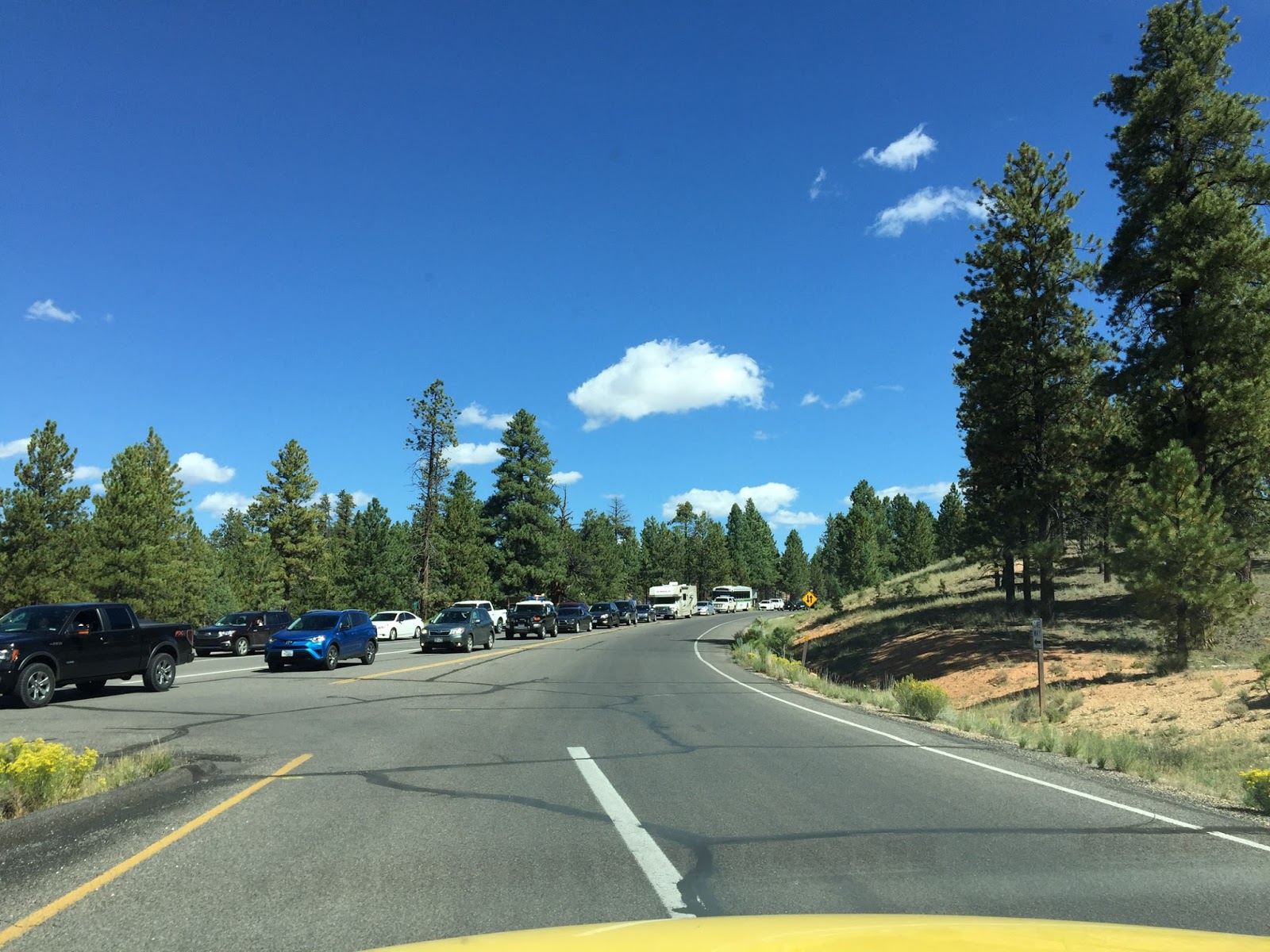 With record-breaking attendance, and continued under-funding, the notion that our national parks are now "loved to death" is a reality.  It is becoming nearly impossible to have a true wilderness, or even solitary human experience, at one of our national parks.  Or is it?

Visiting Zion National Park a few years ago, our hiking group would often venture to the less-common areas of the park.  We discovered many areas of incomparable beauty, and hardly ever saw another soul in our travels.  While these trails and vistas could never quite match the iconic views of the main valley, they were still breathtakingly beautiful and serenely quiet.  All the things most people crave when coming to visit their public lands.

Since discovering other kinds of public lands a decade ago, I've also been a huge fan of bypassing national parks altogether to seek out National Wildlife Refuges, National Forests, and other non-National Park land instead.  It's shocking how beautiful and uncrowded most of these places are.  If more visitors would "break away from the herd" to visit these places instead, not only would it make their visits more enjoyable and rewarding, it'd help restore some balance to our most over-visited national parks as well.

But let's say you can't bear to miss a summertime visit to one of the iconic national parks, and yet you still crave that serene wilderness experience?  What's a nature-lover to do?

Well, many parks (Bryce included) offer backcountry permits to those able and willing to hike and camp into the more-rugged wilderness areas.  If you're savvy with a compass and backcountry survival skills, this is always a great option to ask about when at the Visitor Center information desk.

While park visitor centers, stores, and fee booths might only be open during daytime hours, many parks themselves are open 24 hours a day.  Some parks, such as Bryce, even allow stargazing, moonlight hiking, and night photography from their trails.  Before embarking on any after dark excursions, be sure to inquire with a ranger at the park's visitor center first.  Rules can vary quite a bit from park to park.

During my summer 2016 stay, night hiking and night photography was allowed at Bryce, and every time I did it, the experience was unforgettable.

In early August, when meteor activity was at its peak for the annual Perseids Meteor Shower, I headed out one night to the rim trail between Sunrise and Sunset points.  While I could still see a few lights from the Lodge in the distance, and encountered a handful of other night sky enthusiasts, there were hundreds of fewer people at that spot at midnight than there would have been at noon!

The end result-- some amazing viewing of the Milky Way, and spotting more meteors shoot across the sky than I could count (or photograph)! 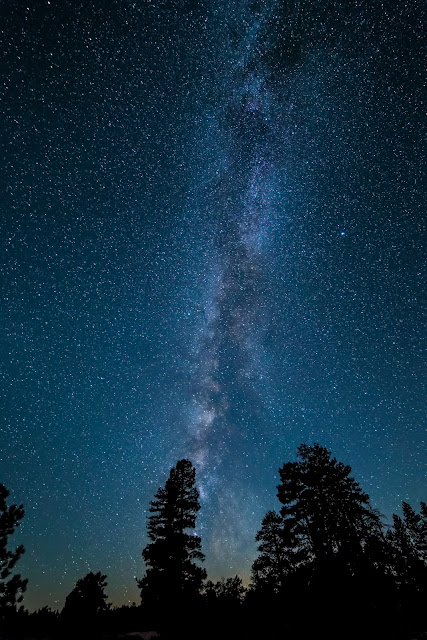 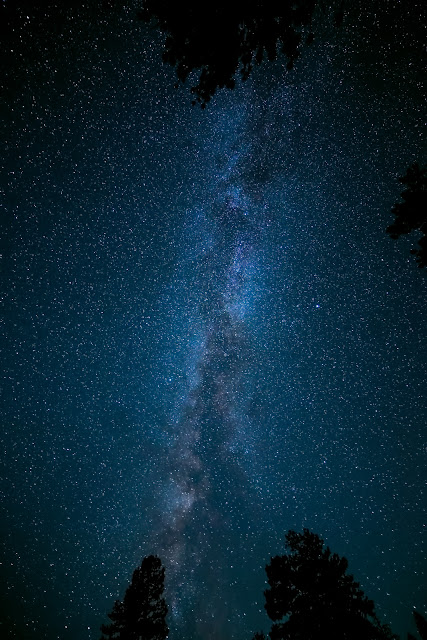 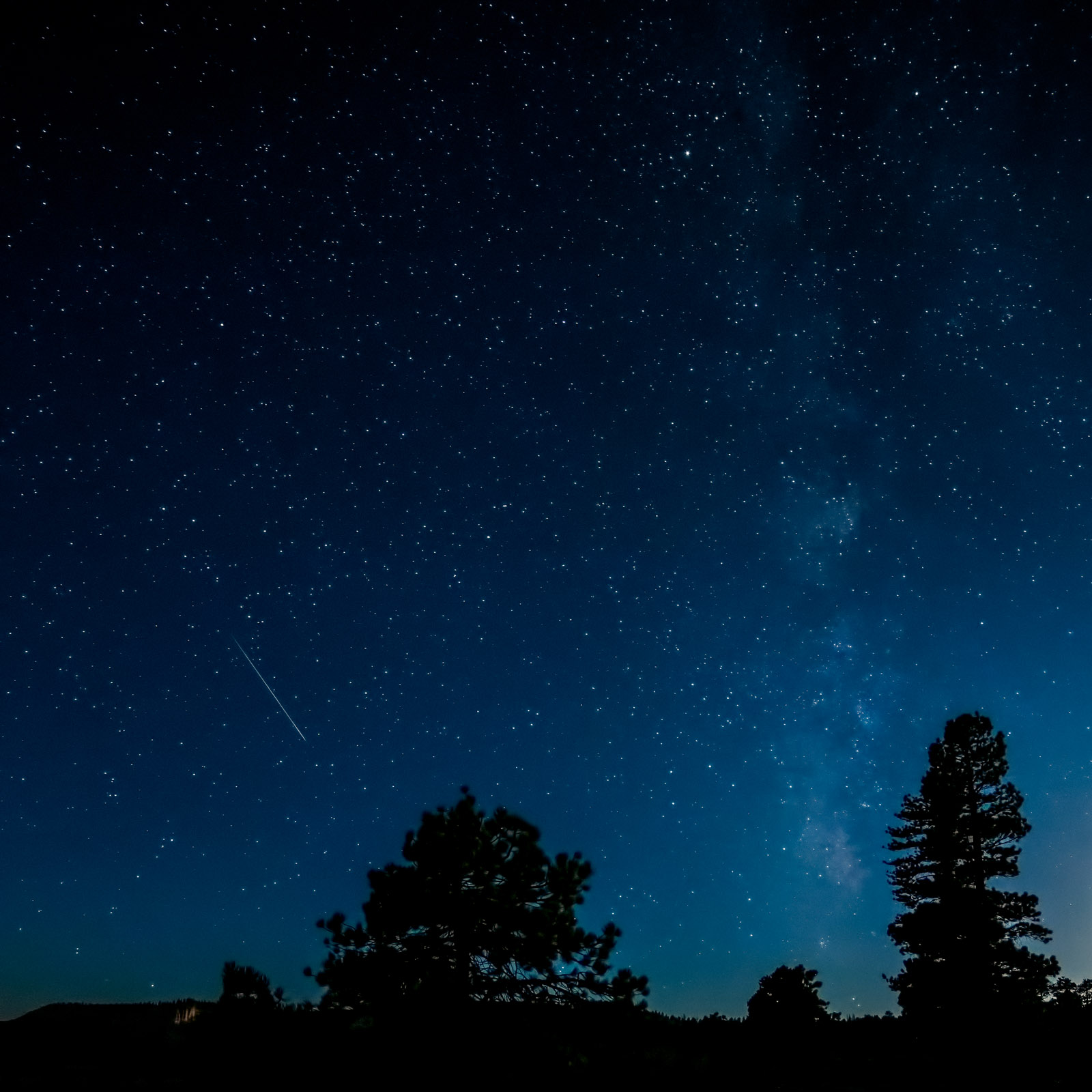 A few weeks later, I decided to do a night "light painting" photo hike down the Queen's Garden trail.  I chose a warmer, clear evening when the moon would not rise until well into the night, and waited until after 10 pm to head down the trail (better ensuring that I'd be the only one on the trail to not disturb other hikers with my headlamp or flashlight).  My planning paid off-- I was the only person on the trail the entire evening. 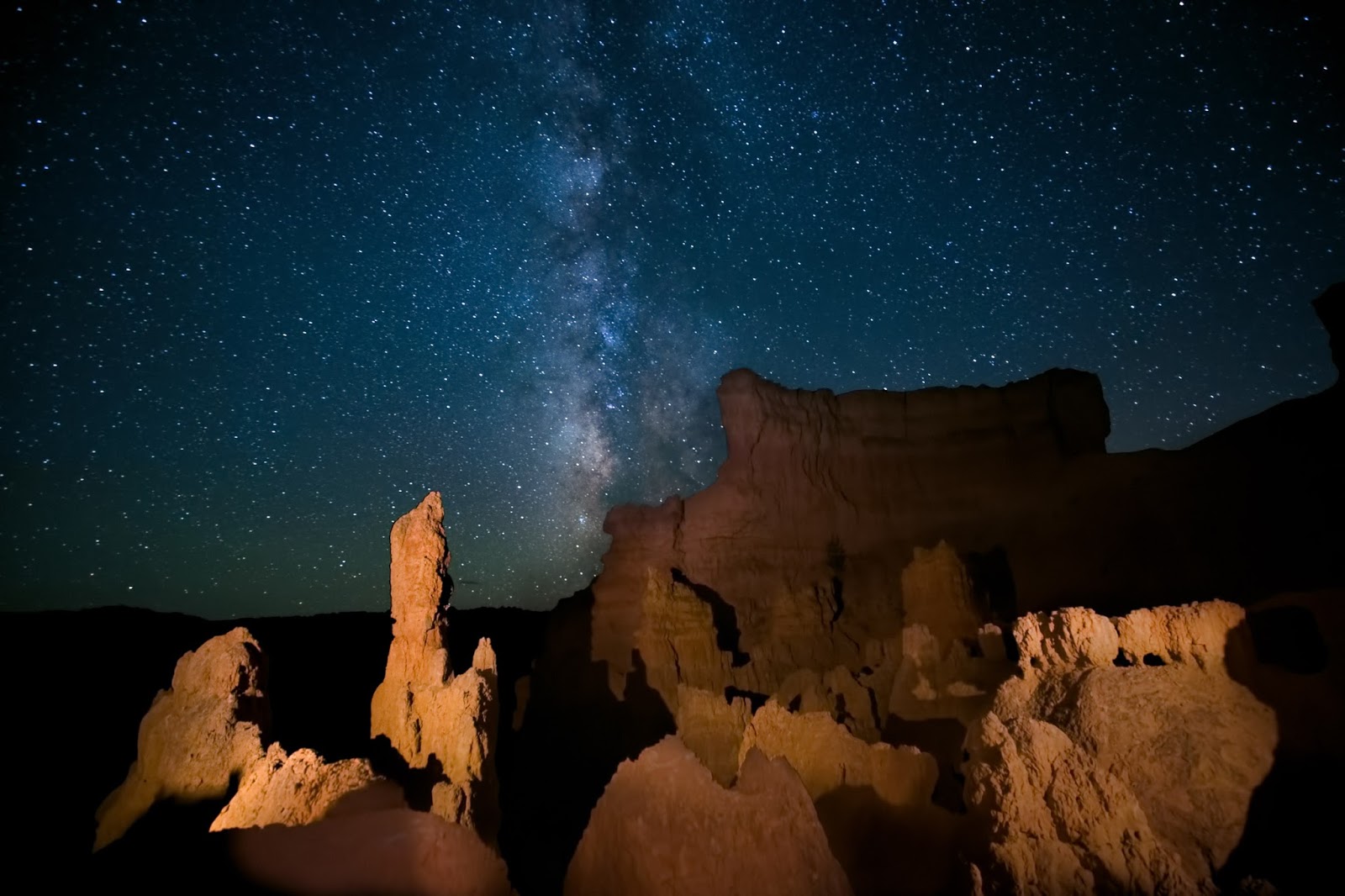 During the daytime, it's impossible to take photos of this popular archway without another person being inside it-- 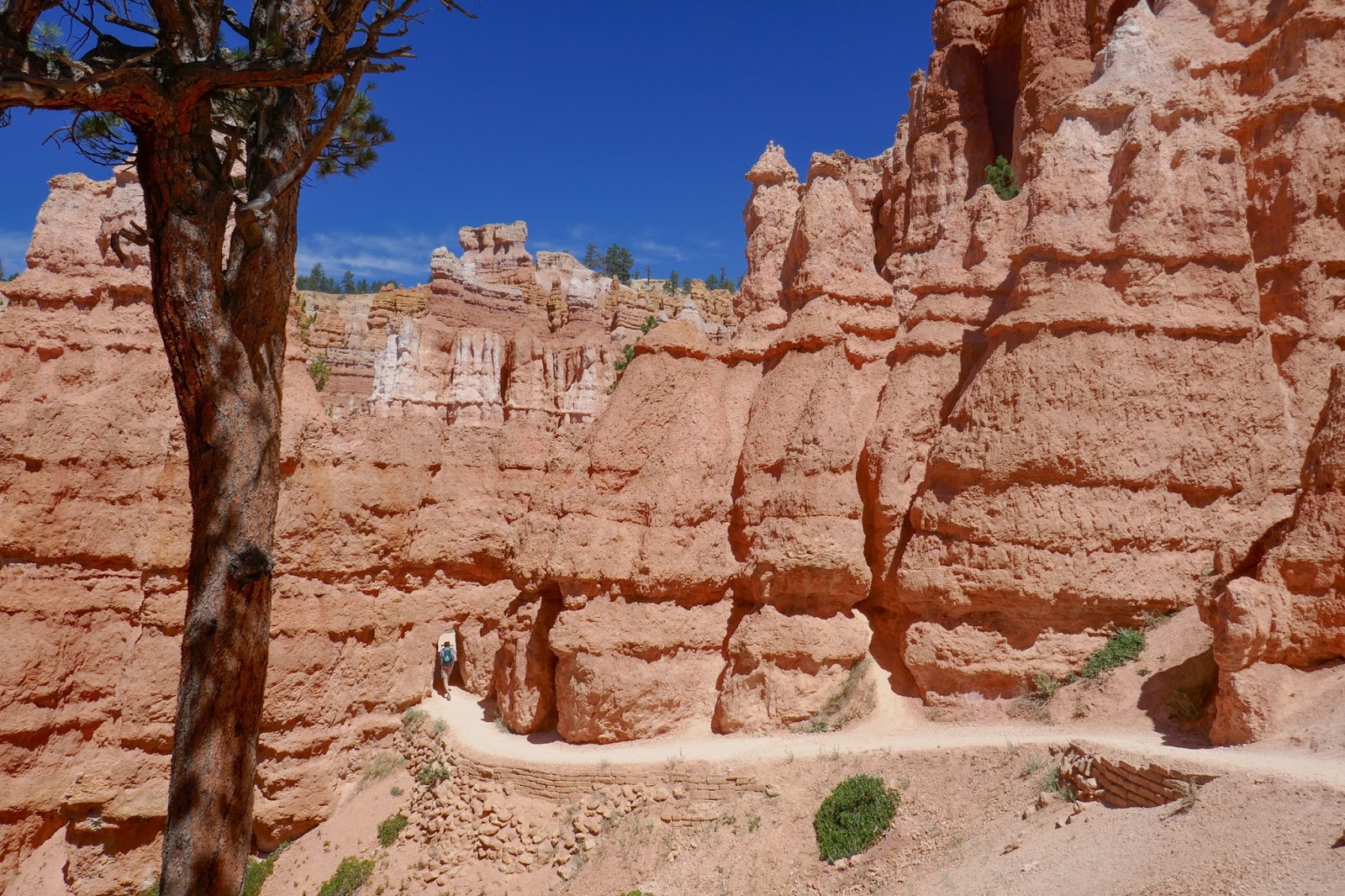 But on a dark, moonless night, it's easy! 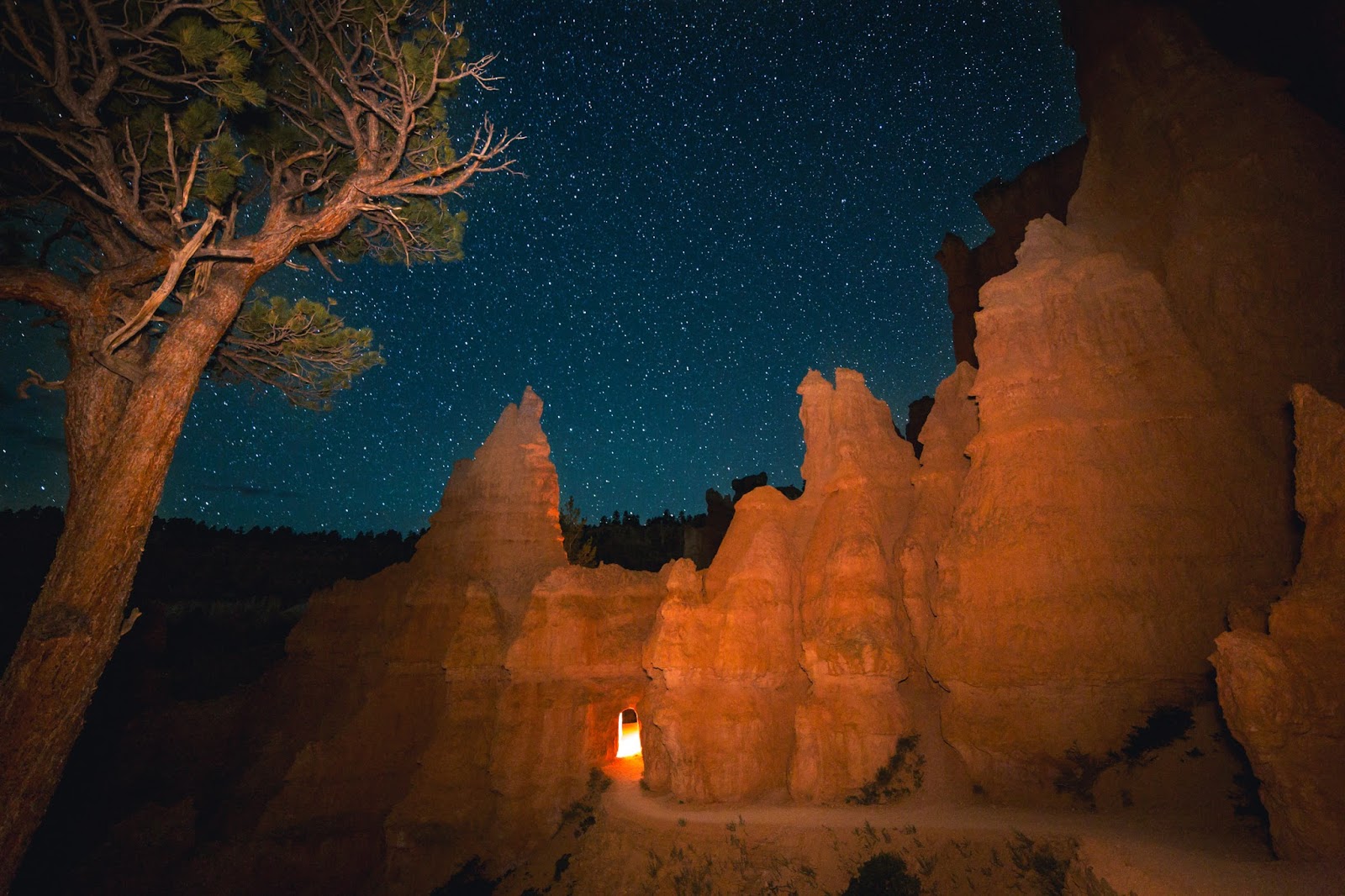 I set one headlamp on the opposite side of the arch to illuminate the passageway, then ran back up the trail to use my LED flashlight (with a yellow gel filter over it) to "paint" the rocks with warmly colored light. 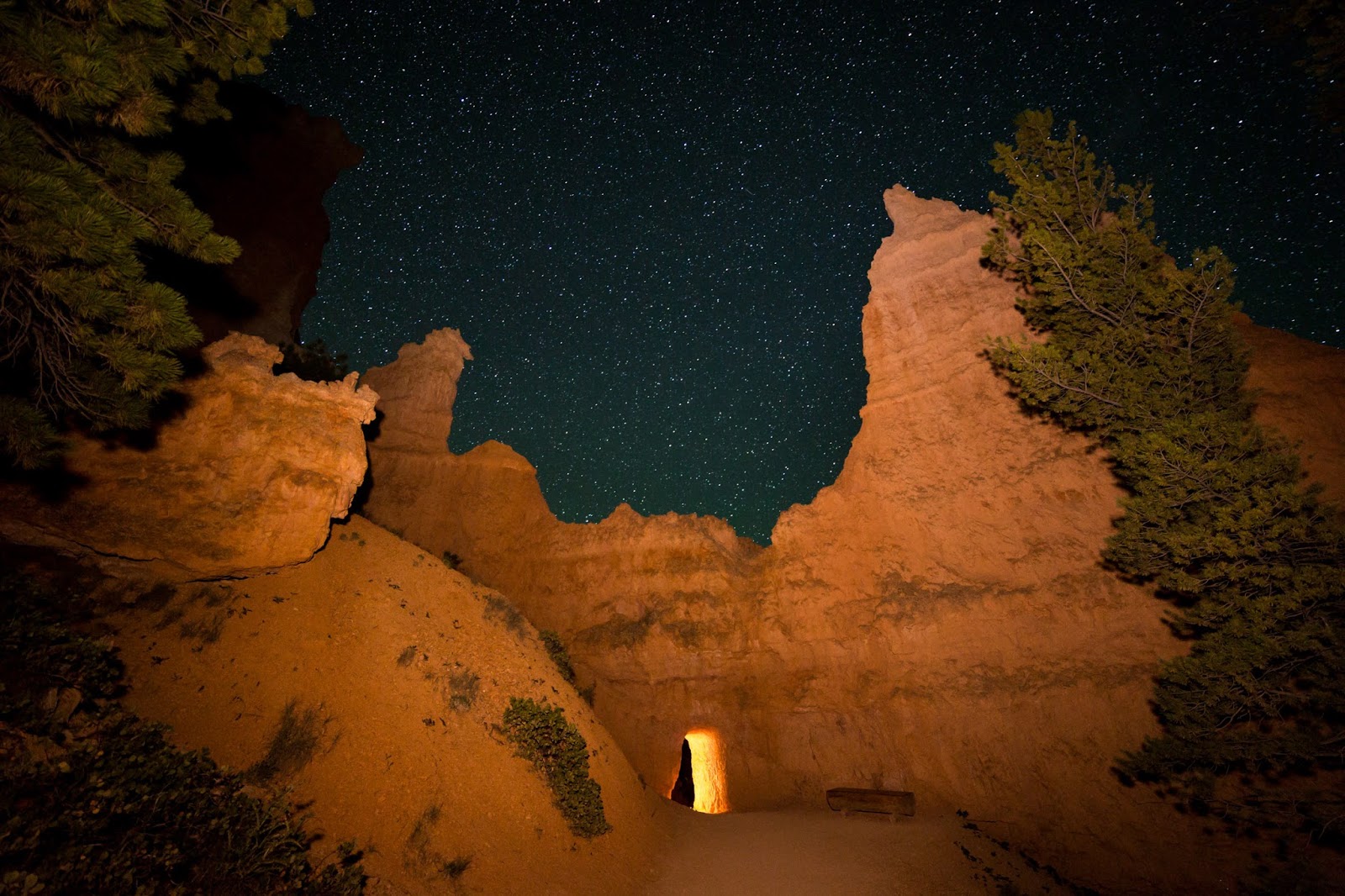 I won't lie-- climbing back up out of the canyon after midnight was just as tiring and laborious as it is in the daytime.  But I stopped often to rest and take a photo or two -- 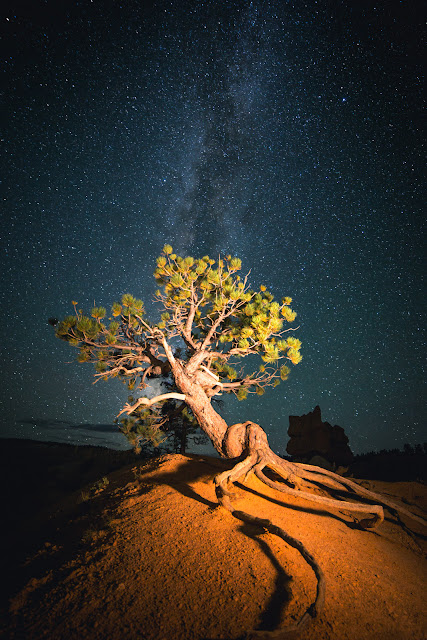 The most rewarding moments were when I'd turn off my headlamp and just stop and listen to the quiet and feel the darkness of the night.  No other sound of humans or wildlife.  No other illumination in any direction except for the blanket of stars overhead.  Truly, an unforgettable experience!

I'd been meaning to get a photo and selfie at the Bryce park entrance sign for weeks.  Every time I'd come home from a grocery run, I'd whiz past the sign with mobs of other tourists surrounding it, and tell myself "next time."  On my final night at Bryce, I realized I'd better go try a night shot of the sign if I wished to get any photo at all.  What a great idea!

The Milky Way just so happened to be positioned right over the sign!  Even though it was well after 11:00 pm, there was still a passing car every minute or two that I had to contend with (its headlights would ruin the long exposure).  Finally, after a dozen failed attempts, I got one right!  I still had my headlamp in "red light" mode when I painted the sign, but I kinda like the effect! 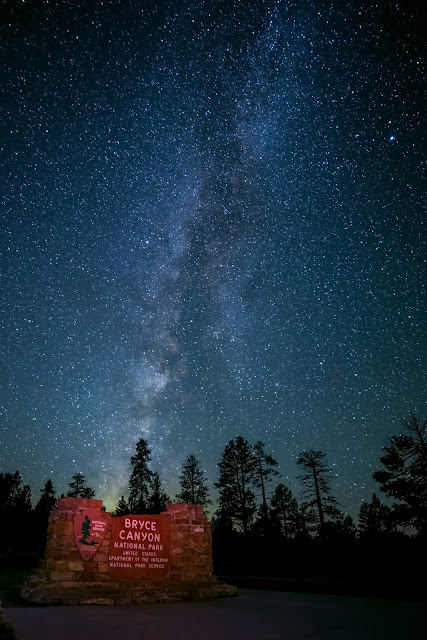 The next photo was purely for fun-- could I do a selfie with the Milky Way?  Well, yes, I guess if you're crazy enough to be out photographing in the middle of the night with a camera and tripod, you can somewhat capture yourself with the Milky Way too! 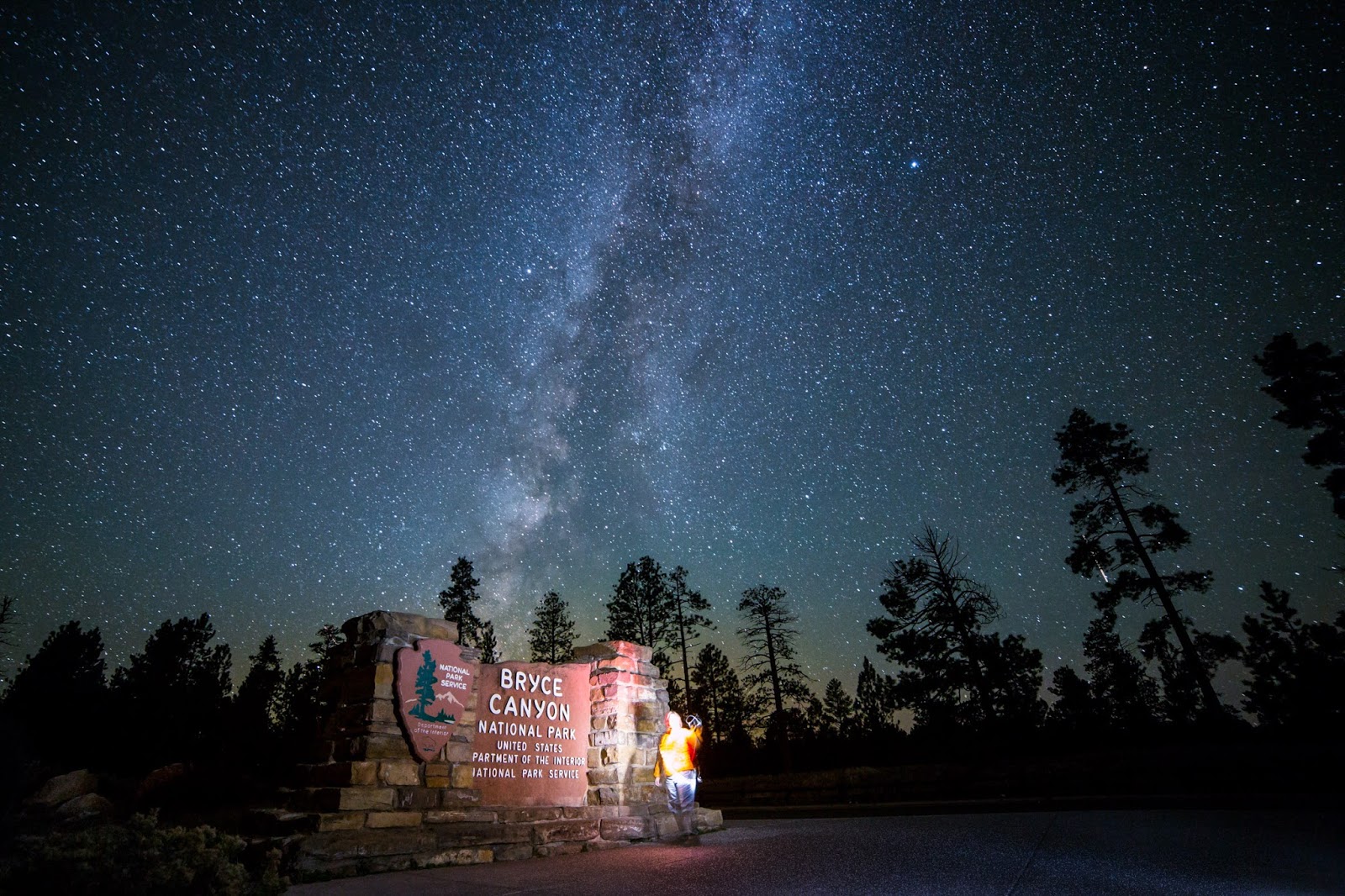 So the next time you visit a national park and get frustrated by the hoards of daytime crowds....don't forget the night!